The Basics of Term Limits

Under consecutive term limits, a member can serve for only a specified period of time in either the state house or the state senate, most commonly eight years. To try to regain a seat in the legislature once the limit has been met, the member will have to wait to run for office again. If the member succeeds, the clock will reset and the legislator may once again serve up to the limit set by the state. In states with a lifetime ban, such as Oklahoma, members can serve only one time for the number of years allotted, and they are not permitted to run for office again.[13] 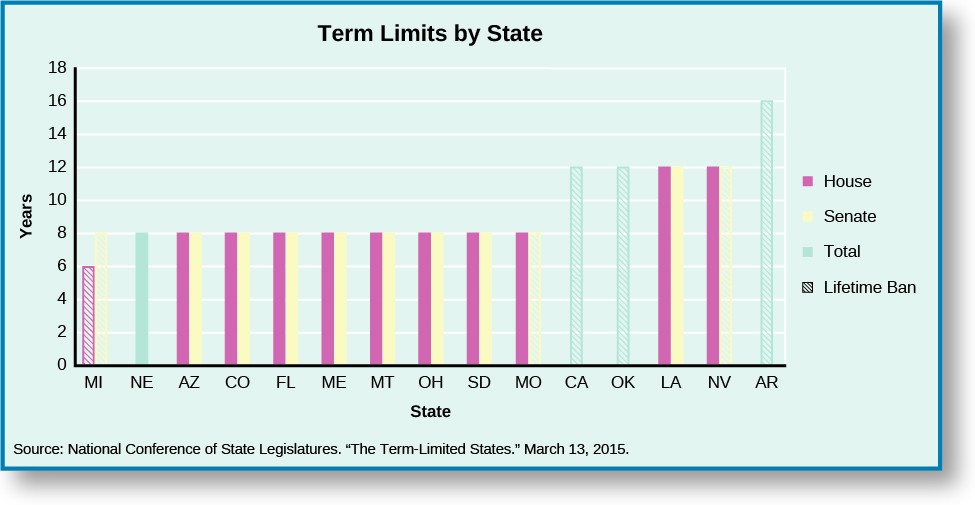 Fifteen states currently have some form of term limits. This chart depicts which states have consecutive term limits or lifetime bans and how long a member can serve under each scenario.

The first term limits were enacted in 1990 in California, Colorado, and Oklahoma. In 1992, eight more states followed suit in one large wave. The last state to enact term limits on legislative members was Nebraska in 2000.[14]

However, term limits did not stay in effect in all these states; many state supreme courts repealed them and declared them unconstitutional for a variety of reasons. For instance, in Massachusetts and Washington, term limits were deemed unconstitutional because they affected candidate qualifications to compete for a given office. The courts ruled that changes to those qualifications could be made only by amending the state constitution, not by voters changing the state law.[15] 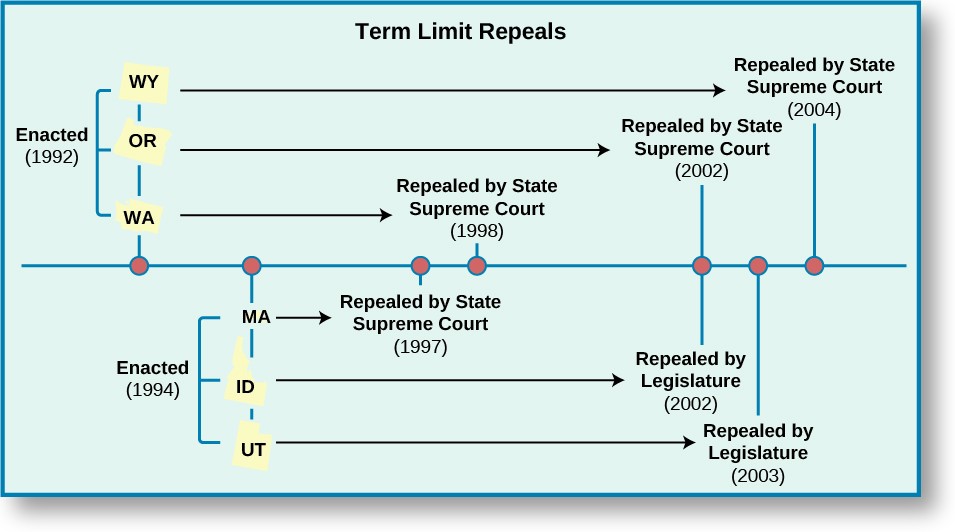 In many cases, the movement to institute term limits was initiated by voters and passed through citizen initiatives, which allow citizens to place a proposed law or constitutional amendment on the ballot for a popular vote.[16]

Proponents of term limits felt new blood was needed in state legislatures to bring fresh ideas and perspectives to lawmaking. In addition, they hoped term limits would compel turnover among members by shortening the time anyone could serve and by reducing the tendency for elected officials to make legislative service their career. In conjunction with this thinking, some supporters hoped term limits would increase the motivation to make good public policy. If members were less focused on reelection and knew they could not serve more than a certain number of years, perhaps they would get right down to the business of making laws and produce innovative policy within a narrow window of time.[17]

For other proponents, the hope was that term limits would increase diversity within the chamber by encouraging more women, members of racial and ethnic minority groups, members of the minority party, and people with unconventional occupations to run for office because seats would be open more frequently. In addition, supporters speculated that increased turnover might prompt higher rates of electoral competition and voter interest. Finally, they believed the loss of long-term legislators due to term limits would allow new members and younger legislators to assume leadership positions within the chamber and committees, creating another way to bring fresh approaches to the lawmaking process.[18]

One pro–term limits advocacy group, U.S. Term Limits, is dedicated to the expansion of term limits across the United States. Its members work to prevent states from repealing limits that are already in place. They also support efforts by citizens to institute term limits in states where they are not currently in place, and in Congress, where the Supreme Court declared them unconstitutional.[19]

If you support their cause, you can follow the link below to learn more about these efforts or to participate directly. Write a letter to the editor encouraging the adoption of term limits in a given state, or encourage your member of Congress to sign a pledge agreeing to cosponsor and vote for an amendment to the Constitution to adopt term limits. You can also sign an online petition to support the adoption of term limits at the federal level or make a donation to a term-limit advocacy group.

What is your state’s policy on term limits? If limits are in place, how have they changed your representation in the state capitol? If they are not in place, what effect would adopting them have on your representation? There is no comparable national movement against term limits, why do you think that is the case? Based on your answers, do you favor term limits or not, and why?

Although proponents have many reasons for supporting term limits, opponents also have compelling reasons for not supporting their implementation in the state legislature. In addition, research by political scientists has uncovered a number of negative consequences since term limits took effect.

Although proponents argued that term limits would increase legislative diversity, research comparing the rate of female and minority representation in term-limited and non-term-limited states does not bear out this expectation. There is no statistically significant difference in diversity between the two groups of states.[20] Although term limits may have produced more open seats, additional barriers to holding office can still exist and affect the willingness of women and minorities to run for office. In addition, women and minorities are subject to the same term limits as men, and given their low numbers among candidates for office, on balance a legislature can lose more women or minorities than it gains.

Term limits also affect the power structure between the legislative and executive branches and the key sources from whom legislators draw information about bills before the chamber. Research demonstrates that, post-term limits, legislators became more likely to consult with lobbyists to gain information about legislation under consideration than had been the case before term limits.[21] This is likely the result of legislators having less policy expertise and political experience as a function of having fewer years in office, being younger when they first enter legislative service, reducing institutional memory and expertise within the chamber as a whole due to member turnover, or all the above. Interest groups may thus enjoy greater ability to set the agenda and push for policy that favors their organization. This same research also found that under term limits state legislators feel they have lost power relative to the governor and to various bureaucratic agency officials.[22] This presumed loss of power could damage the state legislature’s ability to adequately check the actions of the executive branch and to perform legislative functions, such as oversight.

Finally, term limits could affect voter enthusiasm and turnout if voters are disappointed they cannot retain legislators they like or have developed a positive relationship with. Once term limits take effect, all legislators are at the voters’ mercy, regardless of the skill or talent they may bring to the office.

Whether they cap lifetime service or consecutive terms, term limits have become popular in many states, though some have overturned them as unconstitutional. Proponents believe term limits increase voter participation, encourage more women and minorities to run for office, and help bring diversity and fresh ideas to the legislature. Opponents point to research showing that diversity has not increased in term-limit states, and that younger and less experienced legislators tend to rely more on lobbyists for information about proposed bills. Finally, voters disappointed at losing their favorites may fail to go to the polls.