Accessory Organs in Digestion: The Liver, Pancreas, and Gallbladder


Chemical digestion in the small intestine relies on the activities of three accessory digestive organs: the liver, pancreas, and gallbladder. The digestive role of the liver is to produce bile and export it to the duodenum. The gallbladder primarily stores, concentrates, and releases bile. The pancreas produces pancreatic juice, which contains digestive enzymes and bicarbonate ions, and delivers it to the duodenum. 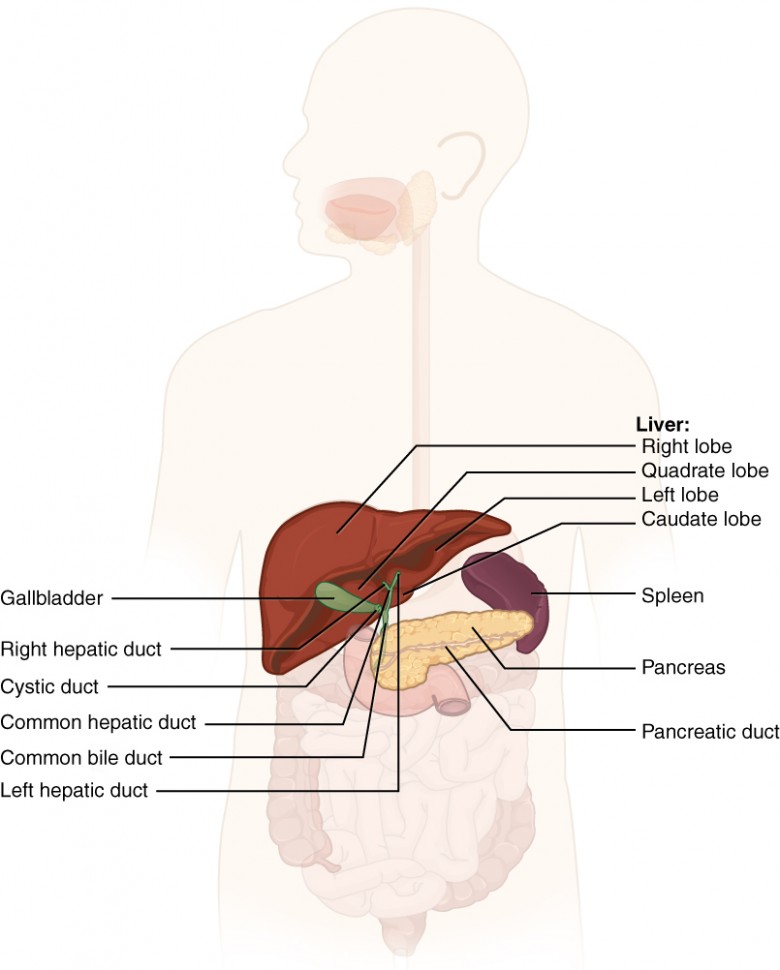 Figure 1. The liver, pancreas, and gallbladder are considered accessory digestive organs, but their roles in the digestive system are vital.

The liver is the largest gland in the body, weighing about three pounds in an adult. It is also one of the most important organs. In addition to being an accessory digestive organ, it plays a number of roles in metabolism and regulation. The liver lies inferior to the diaphragm in the right upper quadrant of the abdominal cavity and receives protection from the surrounding ribs.

The liver is divided into two primary lobes: a large right lobe and a much smaller left lobe. In the right lobe, some anatomists also identify an inferior quadrate lobe and a posterior caudate lobe, which are defined by internal features. The liver is connected to the abdominal wall and diaphragm by five peritoneal folds referred to as ligaments. These are the falciform ligament, the coronary ligament, two lateral ligaments, and the ligamentum teres hepatis. The falciform ligament and ligamentum teres hepatis are actually remnants of the umbilical vein, and separate the right and left lobes anteriorly. The lesser omentum tethers the liver to the lesser curvature of the stomach.

The porta hepatis (“gate to the liver”) is where the hepatic artery and hepatic portal vein enter the liver. These two vessels, along with the common hepatic duct, run behind the lateral border of the lesser omentum on the way to their destinations. As shown in, the hepatic artery delivers oxygenated blood from the heart to the liver. The hepatic portal vein delivers partially deoxygenated blood containing nutrients absorbed from the small intestine and actually supplies more oxygen to the liver than do the much smaller hepatic arteries. In addition to nutrients, drugs and toxins are also absorbed. After processing the bloodborne nutrients and toxins, the liver releases nutrients needed by other cells back into the blood, which drains into the central vein and then through the hepatic vein to the inferior vena cava. With this hepatic portal circulation, all blood from the alimentary canal passes through the liver. This largely explains why the liver is the most common site for the metastasis of cancers that originate in the alimentary canal. 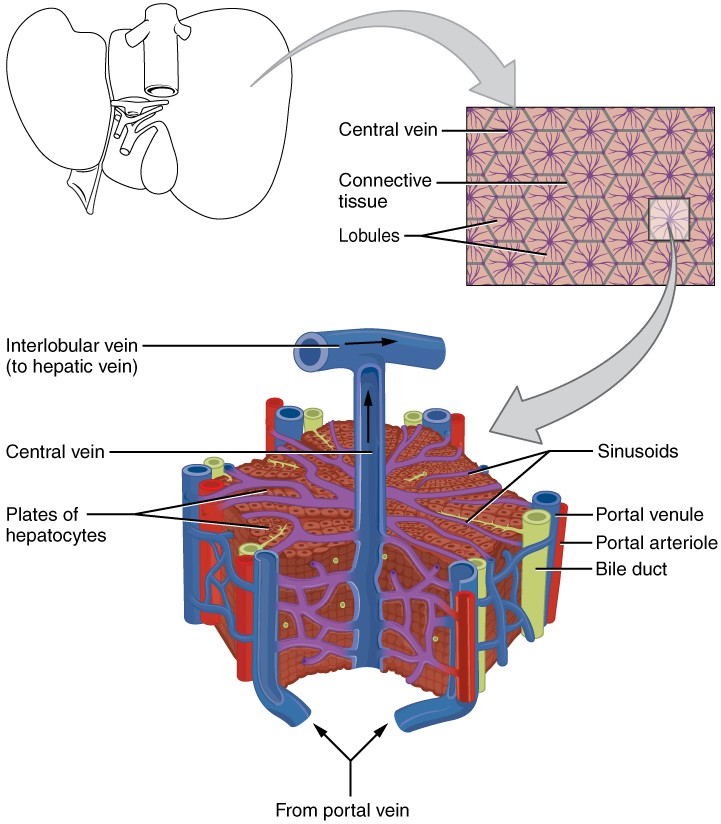 The liver has three main components: hepatocytes, bile canaliculi, and hepatic sinusoids. A hepatocyte is the liver’s main cell type, accounting for around 80 percent of the liver's volume. These cells play a role in a wide variety of secretory, metabolic, and endocrine functions. Plates of hepatocytes called hepatic laminae radiate outward from the portal vein in each hepatic lobule.

Between adjacent hepatocytes, grooves in the cell membranes provide room for each bile canaliculus (plural = canaliculi). These small ducts accumulate the bile produced by hepatocytes. From here, bile flows first into bile ductules and then into bile ducts. The bile ducts unite to form the larger right and left hepatic ducts, which themselves merge and exit the liver as the common hepatic duct. This duct then joins with the cystic duct from the gallbladder, forming the common bile duct through which bile flows into the small intestine.

A hepatic sinusoid is an open, porous blood space formed by fenestrated capillaries from nutrient-rich hepatic portal veins and oxygen-rich hepatic arteries. Hepatocytes are tightly packed around the fenestrated endothelium of these spaces, giving them easy access to the blood. From their central position, hepatocytes process the nutrients, toxins, and waste materials carried by the blood. Materials such as bilirubin are processed and excreted into the bile canaliculi. Other materials including proteins, lipids, and carbohydrates are processed and secreted into the sinusoids or just stored in the cells until called upon. The hepatic sinusoids combine and send blood to a central vein. Blood then flows through a hepatic vein into the inferior vena cava. This means that blood and bile flow in opposite directions. The hepatic sinusoids also contain star-shaped reticuloendothelial cells (Kupffer cells), phagocytes that remove dead red and white blood cells, bacteria, and other foreign material that enter the sinusoids. The portal triad is a distinctive arrangement around the perimeter of hepatic lobules, consisting of three basic structures: a bile duct, a hepatic artery branch, and a hepatic portal vein branch.

Recall that lipids are hydrophobic, that is, they do not dissolve in water. Thus, before they can be digested in the watery environment of the small intestine, large lipid globules must be broken down into smaller lipid globules, a process called emulsification. Bile is a mixture secreted by the liver to accomplish the emulsification of lipids in the small intestine.

Hepatocytes secrete about one liter of bile each day. A yellow-brown or yellow-green alkaline solution (pH 7.6 to 8.6), bile is a mixture of water, bile salts, bile pigments, phospholipids (such as lecithin), electrolytes, cholesterol, and triglycerides. The components most critical to emulsification are bile salts and phospholipids, which have a nonpolar (hydrophobic) region as well as a polar (hydrophilic) region. The hydrophobic region interacts with the large lipid molecules, whereas the hydrophilic region interacts with the watery chyme in the intestine. This results in the large lipid globules being pulled apart into many tiny lipid fragments of about 1 µm in diameter. This change dramatically increases the surface area available for lipid-digesting enzyme activity. This is the same way dish soap works on fats mixed with water.

Bile salts act as emulsifying agents, so they are also important for the absorption of digested lipids. While most constituents of bile are eliminated in feces, bile salts are reclaimed by the enterohepatic circulation. Once bile salts reach the ileum, they are absorbed and returned to the liver in the hepatic portal blood. The hepatocytes then excrete the bile salts into newly formed bile. Thus, this precious resource is recycled.

Bilirubin, the main bile pigment, is a waste product produced when the spleen removes old or damaged red blood cells from the circulation. These breakdown products, including proteins, iron, and toxic bilirubin, are transported to the liver via the splenic vein of the hepatic portal system. In the liver, proteins and iron are recycled, whereas bilirubin is excreted in the bile. It accounts for the green color of bile. Bilirubin is eventually transformed by intestinal bacteria into stercobilin, a brown pigment that gives your stool its characteristic color! In some disease states, bile does not enter the intestine, resulting in white (‘acholic’) stool with a high fat content, since virtually no fats are broken down or absorbed.

Hepatocytes work non-stop, but bile production increases when fatty chyme enters the duodenum and stimulates the secretion of the gut hormone secretin. Between meals, bile is produced but conserved. The valve-like hepatopancreatic ampulla closes, allowing bile to divert to the gallbladder, where it is concentrated and stored until the next meal.


Watch this video to see the structure of the liver and how this structure supports the functions of the liver, including the processing of nutrients, toxins, and wastes. At rest, about 1500 mL of blood per minute flow through the liver. What percentage of this blood flow comes from the hepatic portal system?

The soft, oblong, glandular pancreas lies transversely in the retroperitoneum behind the stomach. Its head is nestled into the “c-shaped” curvature of the duodenum with the body extending to the left about 15.2 cm (6 in) and ending as a tapering tail in the hilum of the spleen. It is a curious mix of exocrine (secreting digestive enzymes) and endocrine (releasing hormones into the blood) functions. 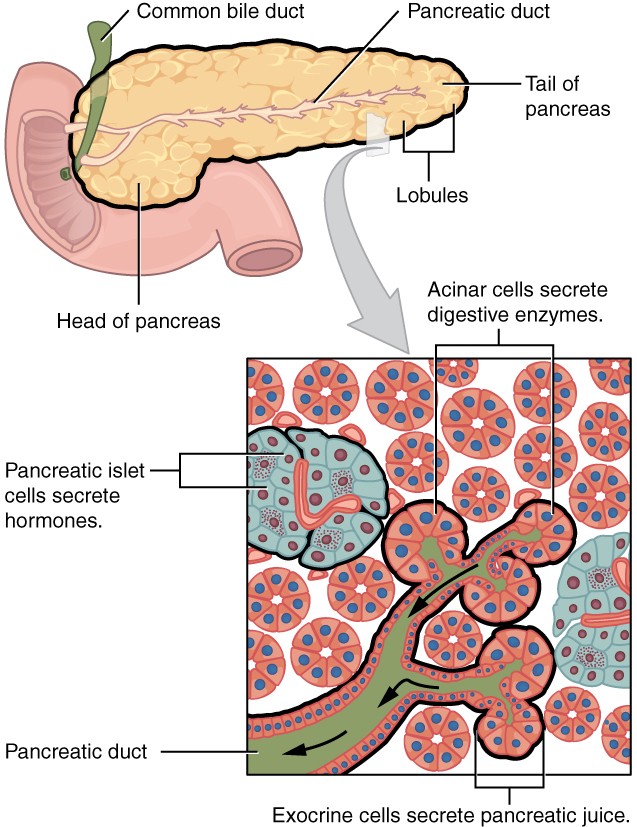 Figure 3. The pancreas has a head, a body, and a tail. It delivers pancreatic juice to the duodenum through the pancreatic duct.

Scattered through the sea of exocrine acini are small islands of endocrine cells, the islets of Langerhans. These vital cells produce the hormones pancreatic polypeptide, insulin, glucagon, and somatostatin.

The pancreas produces over a liter of pancreatic juice each day. Unlike bile, it is clear and composed mostly of water along with some salts, sodium bicarbonate, and several digestive enzymes. Sodium bicarbonate is responsible for the slight alkalinity of pancreatic juice (pH 7.1 to 8.2), which serves to buffer the acidic gastric juice in chyme, inactivate pepsin from the stomach, and create an optimal environment for the activity of pH-sensitive digestive enzymes in the small intestine. Pancreatic enzymes are active in the digestion of sugars, proteins, and fats.

The enzymes that digest starch (amylase), fat (lipase), and nucleic acids (nuclease) are secreted in their active forms, since they do not attack the pancreas as do the protein-digesting enzymes. 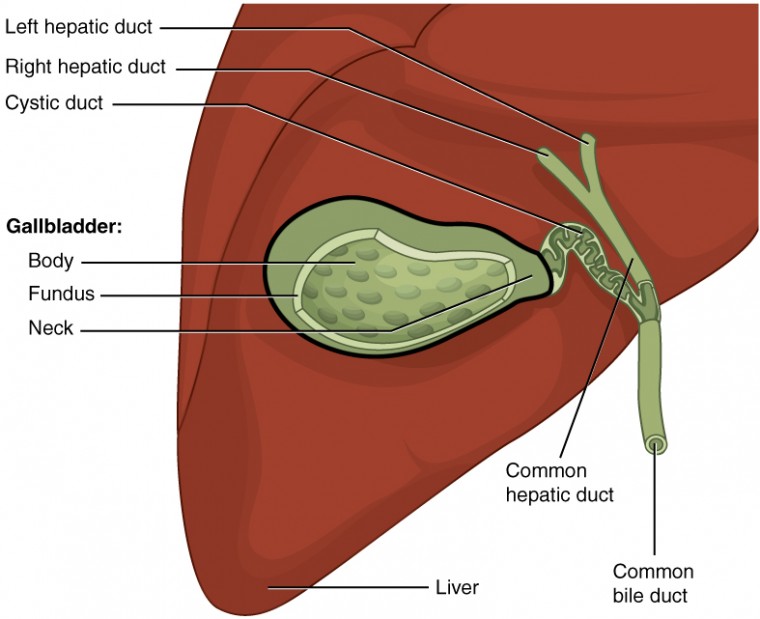 Figure 4. The gallbladder stores and concentrates bile, and releases it into the two-way cystic duct when it is needed by the small intestine.

The gallbladder is 8–10 cm (~3–4 in) long and is nested in a shallow area on the posterior aspect of the right lobe of the liver. This muscular sac stores, concentrates, and, when stimulated, propels the bile into the duodenum via the common bile duct. It is divided into three regions. The fundus is the widest portion and tapers medially into the body, which in turn narrows to become the neck. The neck angles slightly superiorly as it approaches the hepatic duct. The cystic duct is 1–2 cm (less than 1 in) long and turns inferiorly as it bridges the neck and hepatic duct.

The simple columnar epithelium of the gallbladder mucosa is organized in rugae, similar to those of the stomach. There is no submucosa in the gallbladder wall. The wall’s middle, muscular coat is made of smooth muscle fibers. When these fibers contract, the gallbladder’s contents are ejected through the cystic duct and into the bile duct. Visceral peritoneum reflected from the liver capsule holds the gallbladder against the liver and forms the outer coat of the gallbladder. The gallbladder's mucosa absorbs water and ions from bile, concentrating it by up to 10-fold.

Chemical digestion in the small intestine cannot occur without the help of the liver and pancreas. The liver produces bile and delivers it to the common hepatic duct. Bile contains bile salts and phospholipids, which emulsify large lipid globules into tiny lipid droplets, a necessary step in lipid digestion and absorption. The gallbladder stores and concentrates bile, releasing it when it is needed by the small intestine.

accessory duct: (also, duct of Santorini) duct that runs from the pancreas into the duodenum

bile: alkaline solution produced by the liver and important for the emulsification of lipids

bilirubin: main bile pigment, which is responsible for the brown color of feces

common bile duct: structure formed by the union of the common hepatic duct and the gallbladder’s cystic duct

cystic duct: duct through which bile drains and enters the gallbladder

hepatic artery: artery that supplies oxygenated blood to the liver

hepatic sinusoid: blood capillaries between rows of hepatocytes that receive blood from the hepatic portal vein and the branches of the hepatic artery

hepatic vein: vein that drains into the inferior vena cava

liver: largest gland in the body whose main digestive function is the production of bile

porta hepatis: “gateway to the liver” where the hepatic artery and hepatic portal vein enter the liver

reticuloendothelial cell: (also, Kupffer cell) phagocyte in hepatic sinusoids that filters out material from venous blood from the alimentary canal

ACCESSORY ORGANS OF THE GIT.pdf

Chapter 16 - Disease of the Liver, Gallbladder, and Exocrine Pancreas.pdf

HUN 1201 Chapter 3 Digestive system ORGANS OF DIGESTION AND THEIR FUNCTIONS.docx

ANATOMY AND PHYSIOLOGY OF LIVER.docx