Comets and Asteroids: Debris of the Solar System


Not all asteroids are in the main asteroid belt. In this section, we consider some special groups of asteroids with orbits that approach or cross the orbit of Earth. These pose the risk of a catastrophic collision with our planet, such as the collision 65 million years ago that killed the dinosaurs.

In 1994, a 1-kilometer object was picked up passing closer than the Moon, causing a stir of interest in the news media. Today, it is routine to read of small asteroids coming this close to Earth. (They were always there, but only in recent years have astronomers been able to detect such faint objects.)

In 2013, a small asteroid hit our planet, streaking across the sky over the Russian city of Chelyabinsk and exploding with the energy of a nuclear bomb (Figure 1a). The impactor was a stony object about 20 meters in diameter, exploding about 30 kilometers high with an energy of 500 kilotons (about 30 times larger than the nuclear bombs dropped on Japan in World War II). No one was hurt by the blast itself, although it briefly became as bright as the Sun, drawing many spectators to the windows in their offices and homes. When the blast wave from the explosion then reached the town, it blew out the windows. About 1500 people had to seek medical attention from injuries from the shattered glass.

A much larger atmospheric explosion took place in Russia in 1908, caused by an asteroid about 40 meters in diameter, releasing an energy of 5 megatons, as large the most powerful nuclear weapons of today. Fortunately, the area directly affected, on the Tunguska River in Siberia, was unpopulated, and no one was killed. However, the area of forest destroyed by the blast was large equal to the size of a major city (Figure 1b).

Together with any comets that come close to our planet, such asteroids are known collectively as near-Earth objects (NEOs). As we will see (and as the dinosaurs found out 65 million years ago,) the collision of a significant-sized NEO could be a catastrophe for life on our planet.

Figure 1: Impacts with Earth. (a) As the Chelyabinsk meteor passed through the atmosphere, it left a trail of smoke and briefly became as bright as the Sun. (b) Hundreds of kilometers of forest trees were knocked down and burned at the Tunguska impact site. (credit a: modification of work by Alex Alishevskikh)

Watch this video compilation of the Chelyabinsk meteor streaking through the sky over the city on February 15, 2013, as taken by people who were in the area when it occurred.

View this video of a non-technical talk by David Morrison to watch "The Chelyabinsk Meteor: Can We Survive a Bigger Impact?" Dr. Morrison (SETI Institute and NASA Ames Research Center) discusses the Chelyabinsk impact and how we learn about NEOs and protect ourselves; the talk is from the Silicon Valley Astronomy Lectures series.


Astronomers have urged that the first step in protecting Earth from future impacts by NEOs must be to learn what potential impactors are out there. In 1998, NASA began the Spaceguard Survey, with the goal to discover and track 90% of Earth-approaching asteroids greater than 1 kilometer in diameter. The size of 1 kilometer was selected to include all asteroids capable of causing global damage, not merely local or regional effects. At 1 kilometer or larger, the impact could blast so much dust into the atmosphere that the sunlight would be dimmed for months, causing global crop failures—an event that could threaten the survival of our civilization. The Spaceguard goal of 90% was reached in 2012 when nearly a thousand of these 1-kilometer near-Earth asteroids (NEAs) had been found, along with more than 10,000 smaller asteroids. Figure 2 shows how the pace of NEA discoveries has been increasing over recent years. 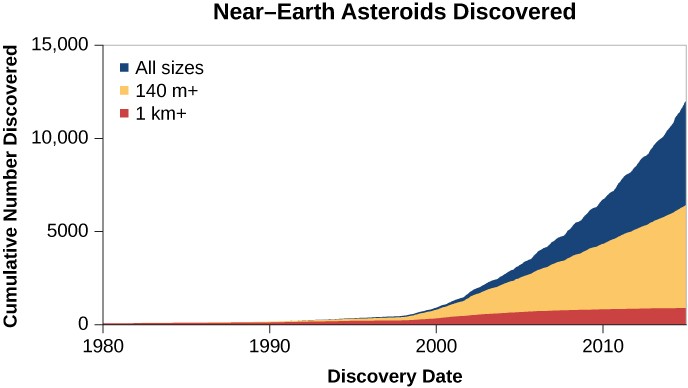 How did astronomers know when they had discovered 90% of these asteroids? There are several ways to estimate the total number, even before they were individually located. One way is to look at the numbers of large craters on the dark lunar maria. Remember that these craters were made by impacts just like the ones we are considering. They are preserved on the Moon’s airless surface, whereas Earth soon erases the imprints of past impacts. Thus, the number of large craters on the Moon allows us to estimate how often impacts have occurred on both the Moon and Earth over the past several billion years. The number of impacts is directly related to the number of asteroids and comets on Earth-crossing orbits.

Another approach is to see how often the surveys (which are automated searches for faint points of light that move among the stars) rediscover a previously known asteroid. At the beginning of a survey, all the NEAs it finds will be new. But as the survey becomes more complete, more and more of the moving points the survey cameras record will be rediscoveries. The more rediscoveries each survey experiences, the more complete our inventory of these asteroids must be.

We have been relieved to find that none of the NEAs discovered so far is on a trajectory that will impact Earth within the foreseeable future. However, we can’t speak for the handful of asteroids larger than 1 kilometer that have not yet been found, or for the much more numerous smaller ones. It is estimated that there are a million NEAs capable of hitting Earth that are smaller than 1 kilometer but still large enough to destroy a city, and our surveys have found fewer than 10% of them. Researchers who work with asteroid orbits estimate that for smaller (and therefore fainter) asteroids we are not yet tracking, we will have about a 5-second warning that one is going to hit Earth—in other words, we won’t see it until it enters the atmosphere. Clearly, this estimate gives us a lot of motivation to continue these surveys to track as many asteroids as possible.

Though entirely predictable over times of a few centuries, the orbits of Earth-approaching asteroids are unstable over long time spans as they are tugged by the gravitational attractions of the planets. These objects will eventually meet one of two fates: either they will impact one of the terrestrial planets or the Sun, or they will be ejected gravitationally from the inner solar system due to a near-encounter with a planet. The probabilities of these two outcomes are about the same. The timescale for impact or ejection is only about a hundred million years, very short compared with the 4-billion-year age of the solar system. Calculations show that only approximately one quarter of the current Earth-approaching asteroids will eventually end up colliding with Earth itself.

If most of the current population of Earth-approaching asteroids will be removed by impact or ejection in a hundred million years, there must be a continuing source of new objects to replenish our supply of NEAs. Most of them come from the asteroid belt between Mars and Jupiter, where collisions between asteroids can eject fragments into Earth-crossing orbits (see Figure 3). Others may be "dead" comets that have exhausted their volatile materials (which we’ll discuss in the next section).

Figure 3: Near-Earth Asteroid. Toutatis is a 5-kilometer long NEA that approached within 3 million kilometers of Earth in 1992. This series of images is a reconstruction its size and shape obtained from bouncing radar waves off the asteroid during its close flyby. Toutatis appears to consist of two irregular, lumpy bodies rotating in contact with each other. (Note that the color has been artificially added.) (credit: modification of work by NASA)

One reason scientists are interested in the composition and interior structure of NEAs is that humans will probably need to defend themselves against an asteroid impact someday. If we ever found one of these asteroids on a collision course with us, we would need to deflect it so it would miss Earth. The most straightforward way to deflect it would be to crash a spacecraft into it, either slowing it or speeding it up, slightly changing its orbital period. If this were done several years before the predicted collision, the asteroid would miss the planet entirely—making an asteroid impact the only natural hazard that we could eliminate completely by the application of technology. Alternatively, such deflection could be done by exploding a nuclear bomb near the asteroid to nudge it off course.

To achieve a successful deflection by either technique, we need to know more about the density and interior structure of the asteroid. A spacecraft impact or a nearby explosion would have a greater effect on a solid rocky asteroid such as Eros than on a loose rubble pile. Think of climbing a sand dune compared to climbing a rocky hill with the same slope. On the dune, much of our energy is absorbed in the slipping sand, so the climb is much more difficult and takes more energy.

There is increasing international interest in the problem of asteroid impacts. The United Nations has formed two technical committees on planetary defense, recognizing that the entire planet is at risk from asteroid impacts. However, the fundamental problem remains one of finding NEAs in time for defensive measures to be taken. We must be able to find the next impactor before it finds us. And that’s a job for the astronomers.

Near-Earth asteroids (NEAs), and near-Earth objects (NEOs) in general, are of interest in part because of their potential to hit Earth. They are on unstable orbits, and on timescales of 100 million years, they will either impact one of the terrestrial planets or the Sun, or be ejected. Most of them probably come from the asteroid belt, but some may be dead comets. NASA’s Spaceguard Survey has found 90% of the NEAs larger than 1 kilometer, and none of the ones found so far are on a collision course with Earth. Scientists are actively working on possible technologies for planetary defense in case any NEOs are found on a collision course with Earth years in advance. For now, the most important task is to continue our surveys, so we can find the next Earth impactor before it finds us.

near-Earth object (NEO): a comet or asteroid whose path intersects the orbit of Earth

near-Earth asteroid (NEA): an Earth-approaching asteroid, one whose orbit could bring it on a collision course with our planet

2 The Formation of the Asteroid Belt, Moons, and Planetary Rings.pdf

D1 - Asteroids of the Main Belt.docx