General Properties of the Moon


The Moon has only one-eightieth the mass of Earth and about one-sixth Earth’s surface gravity—too low to retain an atmosphere (Figure 1). Moving molecules of a gas can escape from a planet just the way a rocket does, and the lower the gravity, the easier it is for the gas to leak away into space.

While the Moon can acquire a temporary atmosphere from impacting comets, this atmosphere is quickly lost by freezing onto the surface or by escape to surrounding space. The Moon today is dramatically deficient in a wide range of volatiles, those elements and compounds that evaporate at relatively low temperatures. Some of the Moon’s properties are summarized in Table 1 along with comparative values for Mercury.

Exploration of the Moon 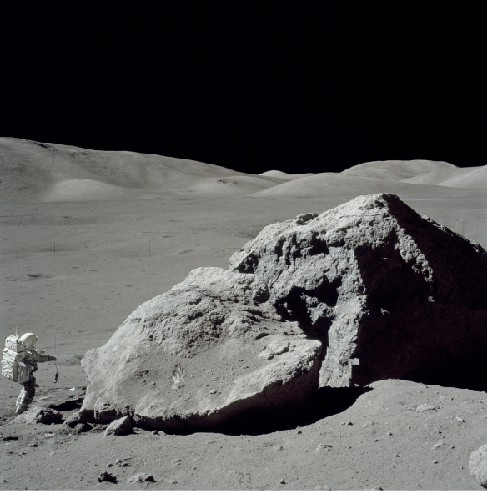 Figure 2. Scientist on the Moon: Geologist (and later US senator) Harrison "Jack" Schmitt in front of a large boulder in the Littrow Valley at the edge of the lunar highlands. Note how black the sky is on the airless Moon. No stars are visible because the surface is brightly lit by the Sun, and the exposure therefore is not long enough to reveal stars.

Most of what we know about the Moon today derives from the US Apollo program, which sent nine piloted spacecraft to our satellite between 1968 and 1972, landing 12 astronauts on its surface. Before the era of spacecraft studies, astronomers had mapped the side of the Moon that faces Earth with telescopic resolution of about 1 kilometer, but lunar geology hardly existed as a scientific subject. All that changed beginning in the early 1960s.

Initially, Russia took the lead in lunar exploration with Luna 3, which returned the first photos of the lunar far side in 1959, and then with Luna 9, which landed on the surface in 1966 and transmitted pictures and other data to Earth. However, these efforts were overshadowed on July 20, 1969, when the first American astronaut set foot on the Moon.

Table 2 summarizes the nine Apollo flights: six that landed and three others that circled the Moon but did not land. The initial landings were on flat plains selected for safety reasons. But with increasing experience and confidence, NASA targeted the last three missions to more geologically interesting locales. The level of scientific exploration also increased with each mission, as the astronauts spent longer times on the Moon and carried more elaborate equipment. Finally, on the last Apollo landing, NASA included one scientist, geologist Jack Schmitt, among the astronauts (Figure 2). 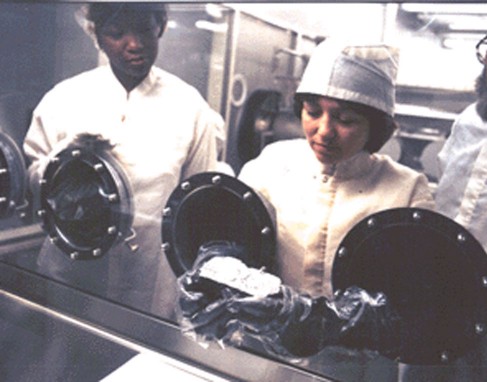 In addition to landing on the lunar surface and studying it at close range, the Apollo missions accomplished three objectives of major importance for lunar science. First, the astronauts collected nearly 400 kilograms of samples for detailed laboratory analysis on Earth (Figure 3).

These samples have revealed as much about the Moon and its history as all other lunar studies combined. Second, each Apollo landing after the first one deployed an Apollo Lunar Surface Experiment Package (ALSEP), which continued to operate for years after the astronauts departed. Third, the orbiting Apollo command modules carried a wide range of instruments to photograph and analyze the lunar surface from above.

The last human left the Moon in December 1972, just a little more than three years after Neil Armstrong took his "giant leap for mankind." The program of lunar exploration was cut off midstride due to political and economic pressures. It had cost just about $100 per American, spread over 10 years—the equivalent of one large pizza per person per year. Yet for many people, the Moon landings were one of the central events in twentieth-century history. 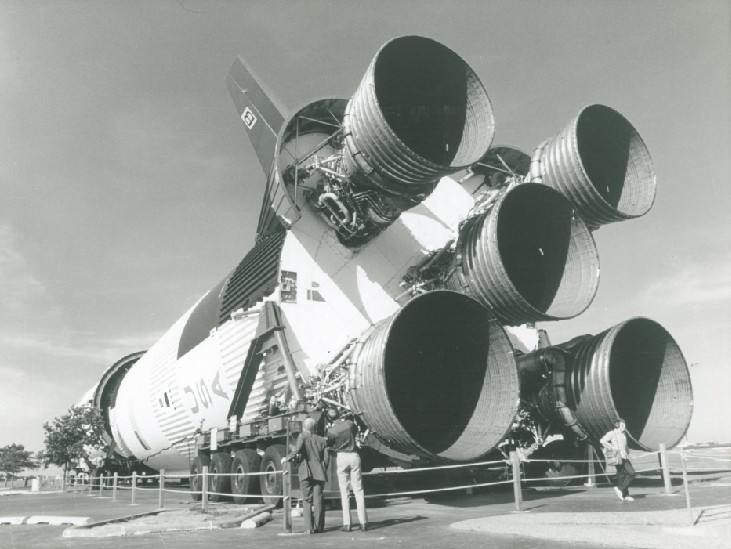 The giant Apollo rockets built to travel to the Moon were left to rust on the lawns of NASA centers in Florida, Texas, and Alabama, although recently, some have at least been moved indoors to museums (Figure 4). One of the unused Saturn 5 rockets built to go to the Moon is now a tourist attraction at NASA’s Johnson Space Center in Houston, although it has been moved indoors since the photo in Figure 4 was taken.

Today, neither NASA nor Russia have plans to send astronauts to the Moon, and China appears to be the nation most likely to attempt this feat. (In a bizarre piece of irony, a few people even question whether we went to the Moon at all, proposing instead that the Apollo program was a fake, filmed on a Hollywood sound stage. See the Link to Learning box below for some scientists’ replies to such claims.) However, scientific interest in the Moon is stronger than ever, and more than half a dozen scientific spacecraft—sent from NASA, ESA, Japan, India, and China—have orbited or landed on our nearest neighbor during the past decade.


Read The Great Moon Hoax about the claim that NASA never succeeded in putting people on the Moon.


Lunar exploration has become an international enterprise with many robotic spacecraft focusing on lunar science. The USSR sent a number in the 1960s, including robot sample returns. Table 3 lists some of the most recent lunar missions.

Composition and Structure of the Moon

The composition of the Moon is not the same as that of Earth. With an average density of only 3.3 g/cm3, the Moon must be made almost entirely of silicate rock. Compared to Earth, it is depleted in iron and other metals. It is as if the Moon were composed of the same silicates as Earth’s mantle and crust, with the metals and the volatiles selectively removed. These differences in composition between Earth and Moon provide important clues about the origin of the Moon, a topic we will cover in detail later in this chapter.

Studies of the Moon’s interior carried out with seismometers taken to the Moon as part of the Apollo program confirm the absence of a large metal core. The twin GRAIL spacecraft launched into lunar orbit in 2011 provided even more precise tracking of the interior structure. We also know from the study of lunar samples that water and other volatiles have been depleted from the lunar crust. The tiny amounts of water detected in these samples were originally attributed to small leaks in the container seal that admitted water vapor from Earth’s atmosphere. However, scientists have now concluded that some chemically bound water is present in the lunar rocks.

Most dramatically, water ice has been detected in permanently shadowed craters near the lunar poles. In 2009, NASA crashed a small spacecraft called the Lunar Crater Observation and Sensing Satellite (LCROSS) into the crater Cabeus near the Moon’s south pole. The impact at 9,000 kilometers per hour released energy equivalent to 2 tons of dynamite, blasting a plume of water vapor and other chemicals high above the surface. This plume was visible to telescopes in orbit around the Moon, and the LCROSS spacecraft itself made measurements as it flew through the plume. A NASA spacecraft called the Lunar Reconnaissance Orbiter (LRO) also measured the very low temperatures inside several lunar craters, and its sensitive cameras were even able to image crater interiors by starlight.

The total quantity of water ice in the Moon’s polar craters is estimated to be hundreds of billions of tons. As liquid, this would only be enough water to fill a lake 100 miles across, but compared with the rest of the dry lunar crust, so much water is remarkable. Presumably, this polar water was carried to the Moon by comets and asteroids that hit its surface. Some small fraction of the water froze in a few extremely cold regions (cold traps) where the Sun never shines, such as the bottom of deep craters at the Moon’s poles. One reason this discovery could be important is that it raises the possibility of future human habitation near the lunar poles, or even of a lunar base as a way-station on routes to Mars and the rest of the solar system. If the ice could be mined, it would yield both water and oxygen for human support, and it could be broken down into hydrogen and oxygen, a potent rocket fuel.

Most of what we know about the Moon derives from the Apollo program, including 400 kilograms of lunar samples still being intensively studied. The Moon has one-eightieth the mass of Earth and is severely depleted in both metals and volatile materials. It is made almost entirely of silicates like those in Earth’s mantle and crust. However, more recent spacecraft have found evidence of a small amount of water near the lunar poles, most likely deposited by comet and asteroid impacts.

Living on another world 1.docx

Properties of Earth and the Moon

Surface Properties of the Moon

Ass. 4- Properties of the Earth and Moon.pptx

MATH MISC •  Autonomous University of the State of Hidalgo

CE 405 •  Technological Institute of the Philippines

What are the three general properties of microorganisms.pdf

General Properties of the Muscular System.pdf

CALC 2 MODULE 3 UNIT 1 (GENERAL PROPERTIES) AND UNIT 2 (INTEGRALS OF ODD AND EVEN FUNCTIONS).pdf

ME 1 •  University of the Fraser Valley

ENSC 1002 •  The University of Western Australia

CHEM 2705 •  University of the West Indies at Cave Hill