Gravity with More Than Two Bodies


Until now, we have considered the Sun and a planet (or a planet and one of its moons) as nothing more than a pair of bodies revolving around each other. In fact, all the planets exert gravitational forces upon one another as well. These interplanetary attractions cause slight variations from the orbits than would be expected if the gravitational forces between planets were neglected. The motion of a body that is under the gravitational influence of two or more other bodies is very complicated and can be calculated properly only with large computers. Fortunately, astronomers have such computers at their disposal in universities and government research institutes.

The Interactions of Many Bodies

As an example, suppose you have a cluster of a thousand stars all orbiting a common center (such clusters are quite common, as we shall see in Star Clusters). If we know the exact position of each star at any given instant, we can calculate the combined gravitational force of the entire group on any one member of the cluster. Knowing the force on the star in question, we can therefore find how it will accelerate. If we know how it was moving to begin with, we can then calculate how it will move in the next instant of time, thus tracking its motion. 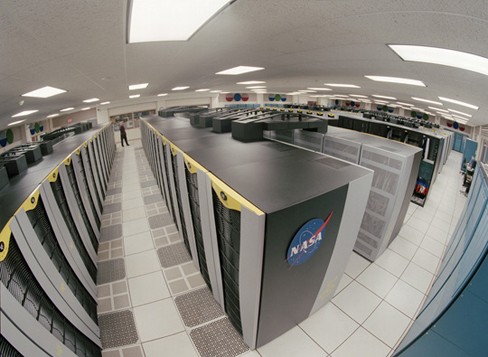 However, the problem is complicated by the fact that the other stars are also moving and thus changing the effect they will have on our star. Therefore, we must simultaneously calculate the acceleration of each star produced by the combination of the gravitational attractions of all the others in order to track the motions of all of them, and hence of any one. Such complex calculations have been carried out with modern computers to track the evolution of hypothetical clusters of stars with up to a million members (Figure 1).

Within the solar system, the problem of computing the orbits of planets and spacecraft is somewhat simpler. We have seen that Kepler’s laws, which do not take into account the gravitational effects of the other planets on an orbit, really work quite well. This is because these additional influences are very small in comparison with the dominant gravitational attraction of the Sun. Under such circumstances, it is possible to treat the effects of other bodies as small perturbations (or disturbances). During the eighteenth and nineteenth centuries, mathematicians developed many elegant techniques for calculating perturbations, permitting them to predict very precisely the positions of the planets. Such calculations eventually led to the prediction and discovery of a new planet in 1846.

The Discovery of Neptune

The discovery of the eighth planet, Neptune, was one of the high points in the development of gravitational theory. In 1781, William Herschel, a musician and amateur astronomer, accidentally discovered the seventh planet, Uranus. It happens that Uranus had been observed a century before, but in none of those earlier sightings was it recognized as a planet; rather, it was simply recorded as a star. Herschel’s discovery showed that there could be planets in the solar system too dim to be visible to the unaided eye, but ready to be discovered with a telescope if we just knew where to look.

By 1790, an orbit had been calculated for Uranus using observations of its motion in the decade following its discovery. Even after allowance was made for the perturbing effects of Jupiter and Saturn, however, it was found that Uranus did not move on an orbit that exactly fit the earlier observations of it made since 1690. By 1840, the discrepancy between the positions observed for Uranus and those predicted from its computed orbit amounted to about 0.03°—an angle barely discernable to the unaided eye but still larger than the probable errors in the orbital calculations. In other words, Uranus just did not seem to move on the orbit predicted from Newtonian theory.

In 1843, John Couch Adams, a young Englishman who had just completed his studies at Cambridge, began a detailed mathematical analysis of the irregularities in the motion of Uranus to see whether they might be produced by the pull of an unknown planet. He hypothesized a planet more distant from the Sun than Uranus, and then determined the mass and orbit it had to have to account for the departures in Uranus’ orbit. In October 1845, Adams delivered his results to George Airy, the British Astronomer Royal, informing him where in the sky to find the new planet. We now know that Adams’ predicted position for the new body was correct to within 2°, but for a variety of reasons, Airy did not follow up right away.

Meanwhile, French mathematician Urbain Jean Joseph Le Verrier, unaware of Adams or his work, attacked the same problem and published its solution in June 1846. Airy, noting that Le Verrier’s predicted position for the unknown planet agreed to within 1° with that of Adams, suggested to James Challis, Director of the Cambridge Observatory, that he begin a search for the new object. The Cambridge astronomer, having no up-to-date star charts of the Aquarius region of the sky where the planet was predicted to be, proceeded by recording the positions of all the faint stars he could observe with his telescope in that location. It was Challis’ plan to repeat such plots at intervals of several days, in the hope that the planet would distinguish itself from a star by its motion. Unfortunately, he was negligent in examining his observations; although he had actually seen the planet, he did not recognize it.

About a month later, Le Verrier suggested to Johann Galle, an astronomer at the Berlin Observatory, that he look for the planet. Galle received Le Verrier’s letter on September 23, 1846, and, possessing new charts of the Aquarius region, found and identified the planet that very night. It was less than a degree from the position Le Verrier predicted. The discovery of the eighth planet, now known as Neptune (the Latin name for the god of the sea), was a major triumph for gravitational theory for it dramatically confirmed the generality of Newton’s laws. The honor for the discovery is properly shared by the two mathematicians, Adams and Le Verrier (Figure 2). 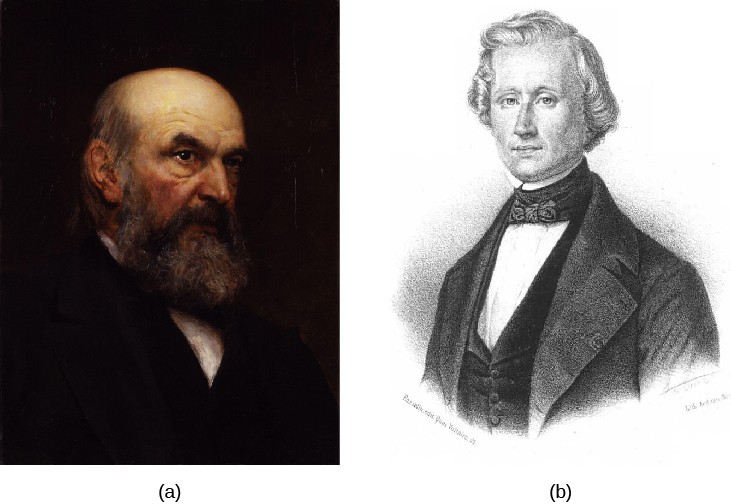 We should note that the discovery of Neptune was not a complete surprise to astronomers, who had long suspected the existence of the planet based on the "disobedient" motion of Uranus. On September 10, 1846, two weeks before Neptune was actually found, John Herschel, son of the discoverer of Uranus, remarked in a speech before the British Association, "We see [the new planet] as Columbus saw America from the shores of Spain. Its movements have been felt trembling along the far-reaching line of our analysis with a certainty hardly inferior to ocular demonstration."

This discovery was a major step forward in combining Newtonian theory with painstaking observations. Such work continues in our own times with the discovery of planets around other stars.


For the fuller story of how Neptune was predicted and found (and the effect of the discovery on the search for Pluto), you can read this page on the mathematical discovery of planets.

Astronomy and the Poets

When Copernicus, Kepler, Galileo, and Newton formulated the fundamental rules that underlie everything in the physical world, they changed much more than the face of science. For some, they gave humanity the courage to let go of old superstitions and see the world as rational and manageable; for others, they upset comforting, ordered ways that had served humanity for centuries, leaving only a dry, "mechanical clockwork" universe in their wake.

Poets of the time reacted to such changes in their work and debated whether the new world picture was an appealing or frightening one. John Donne (1573–1631), in a poem called "Anatomy of the World," laments the passing of the old certainties:

The new Philosophy [science] calls all in doubt,

The element of fire is quite put out;

The Sun is lost, and th’ earth, and no man’s wit

Can well direct him where to look for it.

(Here the "element of fire" refers also to the sphere of fire, which medieval thought placed between Earth and the Moon.)

By the next century, however, poets like Alexander Pope were celebrating Newton and the Newtonian world view. Pope’s famous couplet, written upon Newton’s death, goes

God said, Let Newton be! And all was light.

In his 1733 poem, An Essay on Man, Pope delights in the complexity of the new views of the world, incomplete though they are:

Of man, what see we, but his station here,

He, who thro’ vast immensity can pierce,

Observe how system into system runs,

What other planets circle other suns,

What vary’d being peoples every star,

All nature is but art, unknown to thee;

All chance, direction, which thou canst not see;

All discord, harmony not understood;

And, in spite of pride, in erring reason’s spite,

One truth is clear, whatever is, is right.

Poets and philosophers continued to debate whether humanity was exalted or debased by the new views of science. The nineteenth-century poet Arthur Hugh Clough (1819–1861) cries out in his poem "The New Sinai":

And as old from Sinai’s top God said that God is one,

By science strict so speaks He now to tell us, there is None!

And heart and mind of humankind a watchwork as the rest!

(A "mécanique celeste" is a clockwork model to demonstrate celestial motions.)

The twentieth-century poet Robinson Jeffers (whose brother was an astronomer) saw it differently in a poem called "Star Swirls":

There is nothing like astronomy to pull the stuff out of man.

His stupid dreams and red-rooster importance:

Let him count the star-swirls.

Calculating the gravitational interaction of more than two objects is complicated and requires large computers. If one object (like the Sun in our solar system) dominates gravitationally, it is possible to calculate the effects of a second object in terms of small perturbations. This approach was used by John Couch Adams and Urbain Le Verrier to predict the position of Neptune from its perturbations of the orbit of Uranus and thus discover a new planet mathematically.

perturbation: a small disturbing effect on the motion or orbit of a body produced by a third body

Sometimes there are more than two possibilities an.docx

One Plus One is More Than Two.pdf

English Unit 1_ Lesson 9- Are there more than two genders_ .pdf

How many males ate dinner on Saturday and paid over $20 for more than two people.docx

CIS MISC •  University of the Cumberlands

ADJECTIVES WITH MORE THAN TWO SYLLABLES.pdf

Dell Computers have been the leaders in computer world for more than two decades.docx

The Rosses were family friends we had known for more than two decades and.docx

Feel Company has been producing quality appliances for more than two decades.pdf

Portfolio For More than Two Stocks.doc

In your own words, briefly (no more than two paragraphs) summarise t.docx

Students responsible for replying Replied to more than two cl.docx

GCD of more than two.docx

Conglomerates is a mixture of more than two corporations into one single strong system or structure.

If more than two or three people die in the same house.docx

A program in which there are more than two conditi.docx

For more than two decades.docx

Using Minitab or Excel to Test Hypotheses about the Difference in More than Two Population Means.doc

Write a minimum one page and no more than two pages, MLA format, a s.docx

Create an up-to-date professional resume with NO more than two pages.docx