Between the Stars: Gas and Dust in Space

Interstellar Matter around the Sun


We want to conclude our discussion of interstellar matter by asking how this material is organized in our immediate neighborhood. As we discussed above, orbiting X-ray observatories have shown that the Galaxy is full of bubbles of hot, X-ray-emitting gas. They also revealed a diffuse background of X-rays that appears to fill the entire sky from our perspective (Figure 1). While some of this emission comes from the interaction of the solar wind with the interstellar medium, a majority of it comes from beyond the solar system. The natural explanation for why there is X-ray-emitting gas all around us is that the Sun is itself inside one of the bubbles. We therefore call our "neighborhood" the Local Hot Bubble, or Local Bubble for short. The Local Bubble is much less dense—an average of approximately 0.01 atoms per cm3—than the average interstellar density of about 1 atom per cm3. This local gas has a temperature of about a million degrees, just like the gas in the other superbubbles that spread throughout our Galaxy, but because there is so little hot material, this high temperature does not affect the stars or planets in the area in any way.

What caused the Local Bubble to form? Scientists are not entirely sure, but the leading candidate is winds from stars and supernova explosions. In a nearby region in the direction of the constellations Scorpius and Centaurus, a lot of star formation took place about 15 million years ago. The most massive of these stars evolved very quickly until they produced strong winds, and some ended their lives by exploding. These processes filled the region around the Sun with hot gas, driving away cooler, denser gas. The rim of this expanding superbubble reached the Sun about 7.6 million years ago and now lies more than 200 light-years past the Sun in the general direction of the constellations of Orion, Perseus, and Auriga.

Figure 1. Sky in X-Rays: This image, made by the ROSAT satellite, shows the whole sky in X-rays as seen from Earth. Different colors indicate different X-ray energies: red is 0.25 kiloelectron volts, green is 0.75 kiloelectron volts, and blue is 1.5 kiloelectron volts. The image is oriented so the plane of the Galaxy runs across the middle of the image. The ubiquitous red color, which does not disappear completely even in the galactic plane, is evidence for a source of X-rays all around the Sun. (credit: modification of work by NASA)

A few clouds of interstellar matter do exist within the Local Bubble. The Sun itself seems to have entered a cloud about 10,000 years ago. This cloud is warm (with a temperature of about 7000 K) and has a density of 0.3 hydrogen atom per cm3—higher than most of the Local Bubble but still so tenuous that it is also referred to as Local Fluff (Figure 2). (Aren’t these astronomical names fun sometimes?)

While this is a pretty thin cloud, we estimate that it contributes 50 to 100 times more particles than the solar wind to the diffuse material between the planets in our solar system. These interstellar particles have been detected and their numbers counted by the spacecraft traveling between the planets. Perhaps someday, scientists will devise a way to collect them without destroying them and to return them to Earth, so that we can touch—or at least study in our laboratories—these messengers from distant stars. 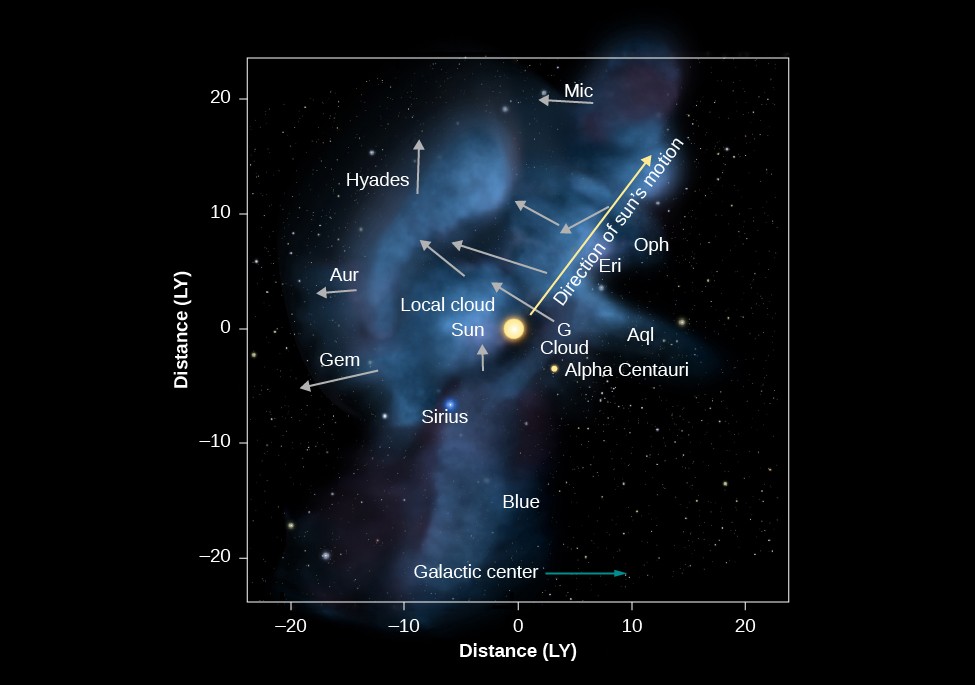 Figure 2. Local Fluff: The Sun and planets are currently moving through the Local Interstellar Cloud, which is also called the Local Fluff. Fluff is an appropriate description because the density of this cloud is only about 0.3 atom per cm3. In comparison, Earth’s atmosphere at the edge of space has around 1.2 × 1013 molecules per cm3. This image shows the patches of interstellar matter (mostly hydrogen gas) within about 20 light-years of the Sun. The temperature of the Local Interstellar Cloud is about 7,000 K. The arrows point toward the directions that different parts of the cloud are moving. The names associated with each arrow indicate the constellations located on the sky toward which the parts of the cloud are headed. The solar system is thought to have entered the Local Interstellar Cloud, which is a small cloud located within a much larger superbubble that is expanding outward from the Scorpius-Centaurus region of the sky, at some point between 44,000 and 150,000 years ago and is expected to remain within it for another 10,000 to 20,000 years. (credit: modification of work by NASA/Goddard/Adler/University Chicago/Wesleyan)

The Sun is located at the edge of a low-density cloud called the Local Fluff. The Sun and this cloud are located within the Local Bubble, a region extending to at least 300 light-years from the Sun, within which the density of interstellar material is extremely low. Astronomers think this bubble was blown by some nearby stars that experienced a strong wind and some supernova explosions.

Local Bubble: (or Local Hot Bubble) a region of low-density, million degree gas in which the Sun and solar system are currently located

Local Fluff: a slightly denser cloud inside the Local Bubble, inside which the Sun also lies

The planets travel around the sun every day and the sun appears to circle the globe.pdf

PSYCHOLOGY 118 •  University of the Philippines Diliman

The three kinds of earth movements are polar axis, orbit around the sun, and precession.pdf

The time a planet takes to revolve once around the sun relates direc.docx

The hot central part of the cloud became the sun, and a smaller part formed around it to become a pl

Why do planets have different periods of revolution around the sun.pdf

Another Spin Around the Sun.txt

The earth has season because of the way the moon and sun revolve around the earth.docx

Earth's Movement Around the Sun.pptx

EARTH'S MOVEMENT AROUND THE SUN.docx

Our dance around the sun.docx

The hot, central part of the cloud becomes the sun, while smaller pieces form around it and become

1. The Earth is moving around the Sun along an orbit that is appro.docx