The measurement of time is based on the rotation of Earth. Throughout most of human history, time has been reckoned by positions of the Sun and stars in the sky. Only recently have mechanical and electronic clocks taken over this function in regulating our lives.

The Length of the Day

A solar day is slightly longer than a sidereal day because (as you can see from Figure 1) Earth not only turns but also moves along its path around the Sun in a day. Suppose we start when Earth’s orbital position is at day 1, with both the Sun and some distant star (located in the direction indicated by the long white arrow pointing left), directly in line with the zenith for the observer on Earth. When Earth has completed one rotation with respect to the distant star and is at day 2, the long arrow again points to the same distant star. However, notice that because of the movement of Earth along its orbit from day 1 to 2, the Sun has not yet reached a position above the observer. To complete a solar day, Earth must rotate an additional amount, equal to 1/365 of a full turn. The time required for this extra rotation is 1/365 of a day, or about 4 minutes. So the solar day is about 4 minutes longer than the sidereal day.

Figure 1: Difference Between a Sidereal Day and a Solar Day. This is a top view, looking down as Earth orbits the Sun. Because Earth moves around the Sun (roughly 1° per day), after one complete rotation of Earth relative to the stars, we do not see the Sun in the same position.

Because our ordinary clocks are set to solar time, stars rise 4 minutes earlier each day. Astronomers prefer sidereal time for planning their observations because in that system, a star rises at the same time every day.

The Sun makes a complete circle in the sky approximately every 24 hours, while the stars make a complete circle in the sky in 4 minutes less time, or 23 hours and 56 minutes. This causes the positions of the stars at a given time of day or night to change slightly each day. Since stars rise 4 minutes earlier each day, that works out to about 2 hours per month (4 minutes × 30 = 120 minutes or 2 hours). So, if a particular constellation rises at sunset during the winter, you can be sure that by the summer, it will rise about 12 hours earlier, with the sunrise, and it will not be so easily visible in the night sky. Let’s say that tonight the bright star Sirius rises at 7:00 p.m. from a given location so that by midnight, it is very high in the sky. At what time will Sirius rise in three months?

In three months’ time, Sirius will be rising earlier by:

If a star rises at 8:30 p.m. tonight, approximately what time will it rise two months from now?

In two months, the star will rise:

We can define apparent solar time as time reckoned by the actual position of the Sun in the sky (or, during the night, its position below the horizon). This is the kind of time indicated by sundials, and it probably represents the earliest measure of time used by ancient civilizations. Today, we adopt the middle of the night as the starting point of the day and measure time in hours elapsed since midnight.

During the first half of the day, the Sun has not yet reached the meridian (the great circle in the sky that passes through our zenith). We designate those hours as before midday (ante meridiem, or a.m.), before the Sun reaches the local meridian. We customarily start numbering the hours after noon over again and designate them by p.m. (post meridiem), after the Sun reaches the local meridian.

Although apparent solar time seems simple, it is not really very convenient to use. The exact length of an apparent solar day varies slightly during the year. The eastward progress of the Sun in its annual journey around the sky is not uniform because the speed of Earth varies slightly in its elliptical orbit. Another complication is that Earth’s axis of rotation is not perpendicular to the plane of its revolution. Thus, apparent solar time does not advance at a uniform rate. After the invention of mechanical clocks that run at a uniform rate, it became necessary to abandon the apparent solar day as the fundamental unit of time.

Instead, we can consider the mean solar time, which is based on the average value of the solar day over the course of the year. A mean solar day contains exactly 24 hours and is what we use in our everyday timekeeping. Although mean solar time has the advantage of progressing at a uniform rate, it is still inconvenient for practical use because it is determined by the position of the Sun. For example, noon occurs when the Sun is overhead. But because we live on a round Earth, the exact time of noon is different as you change your longitude by moving east or west.

If mean solar time were strictly observed, people traveling east or west would have to reset their watches continually as the longitude changed, just to read the local mean time correctly. For instance, a commuter traveling from Oyster Bay on Long Island to New York City would have to adjust the time on the trip through the East River tunnel because Oyster Bay time is actually about 1.6 minutes more advanced than that of Manhattan. (Imagine an airplane trip in which an obnoxious flight attendant gets on the intercom every minute, saying, "Please reset your watch for local mean time.")

Until near the end of the nineteenth century, every city and town in the United States kept its own local mean time. With the development of railroads and the telegraph, however, the need for some kind of standardization became evident. In 1883, the United States was divided into four standard time zones (now six, including Hawaii and Alaska), each with one system of time within that zone.

By 1900, most of the world was using the system of 24 standardized global time zones. Within each zone, all places keep the same standard time, with the local mean solar time of a standard line of longitude running more or less through the middle of each zone. Now travelers reset their watches only when the time change has amounted to a full hour. Pacific standard time is 3 hours earlier than eastern standard time, a fact that becomes painfully obvious in California when someone on the East Coast forgets and calls you at 5:00 a.m.

Globally, almost all countries have adopted one or more standard time zones, although one of the largest nations, India, has settled on a half-zone, being 5.5 hours from Greenwich standard. Also, several large countries (Russia, China) officially use only one time zone, so all the clocks in that country keep the same time. In Tibet, for example, the Sun rises while the clocks (which keep Beijing time) say it is midmorning already.

Daylight saving time is simply the local standard time of the place plus 1 hour. It has been adopted for spring and summer use in most states in the United States, as well as in many countries, to prolong the sunlight into evening hours, on the apparent theory that it is easier to change the time by government action than it would be for individuals or businesses to adjust their own schedules to produce the same effect. It does not, of course, "save" any daylight at all—because the amount of sunlight is not determined by what we do with our clocks—and its observance is a point of legislative debate in some states.

The fact that time is always advancing as you move toward the east presents a problem. Suppose you travel eastward around the world. You pass into a new time zone, on the average, about every 15° of longitude you travel, and each time you dutifully set your watch ahead an hour. By the time you have completed your trip, you have set your watch ahead a full 24 hours and thus gained a day over those who stayed at home.

The solution to this dilemma is the International Date Line, set by international agreement to run approximately along the 180° meridian of longitude. The date line runs down the middle of the Pacific Ocean, although it jogs a bit in a few places to avoid cutting through groups of islands and through Alaska (Figure 2). By convention, at the date line, the date of the calendar is changed by one day. Crossing the date line from west to east, thus advancing your time, you compensate by decreasing the date; crossing from east to west, you increase the date by one day. To maintain our planet on a rational system of timekeeping, we simply must accept that the date will differ in different cities at the same time. A good example is the date when the Imperial Japanese Navy bombed Pearl Harbor in Hawaii, known in the United States as Sunday, December 7, 1941, but taught to Japanese students as Monday, December 8. 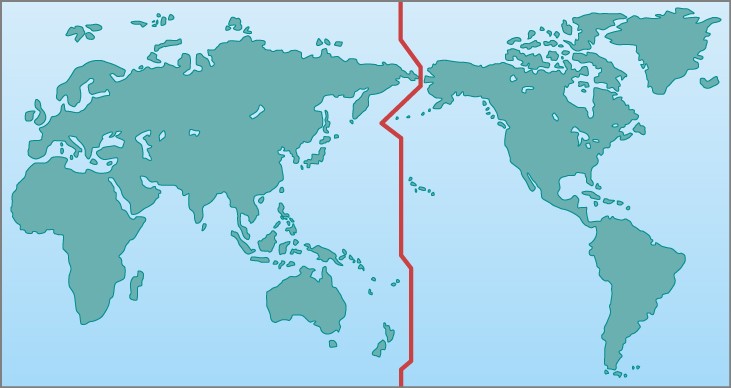 Figure 2: Where the Date Changes. The International Date Line is an arbitrarily drawn line on Earth where the date changes. So that neighbors do not have different days, the line is located where Earth’s surface is mostly water.

The basic unit of astronomical time is the day—either the solar day (reckoned by the Sun) or the sidereal day (reckoned by the stars). Apparent solar time is based on the position of the Sun in the sky, and mean solar time is based on the average value of a solar day during the year. By international agreement, we define 24 time zones around the world, each with its own standard time. The convention of the International Date Line is necessary to reconcile times on different parts of Earth.

apparent solar time: time as measured by the position of the Sun in the sky (the time that would be indicated by a sundial)

International Date Line: an arbitrary line on the surface of Earth near longitude 180° across which the date changes by one day

sidereal day: Earth’s rotation period as defined by the positions of the stars in the sky; the time between successive passages of the same star through the meridian

solar day: Earth’s rotation period as defined by the position of the Sun in the sky; the time between successive passages of the Sun through the meridian

PHYS 1002 •  The Hong Kong University of Science and Technology

Notes on Islamic Influence on Astronomy

Lesson 4 - Lecture 2 - Time and the Calendar.pdf