Traditionally, astronomers have assumed that the planets in our solar system formed at about their current distances from the Sun and have remained there ever since. The first step in the formation of a giant planet is to build up a solid core, which happens when planetesimals collide and stick. Eventually, this core becomes massive enough to begin sweeping up gaseous material in the disk, thereby building the gas giants Jupiter and Saturn.

How to Make a Hot Jupiter

The traditional model for the formation of planets works only if the giant planets are formed far from the central star (about 5–10 AU), where the disk is cold enough to have a fairly high density of solid matter. It cannot explain the hot Jupiters, which are located very close to their stars where any rocky raw material would be completely vaporized. It also cannot explain the elliptical orbits we observe for some exoplanets because the orbit of a protoplanet, whatever its initial shape, will quickly become circular through interactions with the surrounding disk of material and will remain that way as the planet grows by sweeping up additional matter.

So we have two options: either we find a new model for forming planets close to the searing heat of the parent star, or we find a way to change the orbits of planets so that cold Jupiters can travel inward after they form. Most research now supports the latter explanation.

Calculations show that if a planet forms while a substantial amount of gas remains in the disk, then some of the planet’s orbital angular momentum can be transferred to the disk. As it loses momentum (through a process that reminds us of the effects of friction), the planet will spiral inward. This process can transport giant planets, initially formed in cold regions of the disk, closer to the central star—thereby producing hot Jupiters. Gravitational interactions between planets in the chaotic early solar system can also cause planets to slingshot inward from large distances. But for this to work, the other planet has to carry away the angular momentum and move to a more distant orbit.

Then, some startling discoveries were made of gas giant planets that orbited at right angles or even in the opposite sense as the spin of the star. How could this happen? Again, there must have been interactions between planets. It’s possible that before the system settled down, two planets came close together, so that one was kicked into an usual orbit. Or perhaps a passing star perturbed the system after the planets were newly formed.

When the Milky Way Galaxy was young, the stars that formed did not contain many heavy elements like iron. Several generations of star formation and star death were required to enrich the interstellar medium for subsequent generations of stars. Since planets seem to form "inside out," starting with the accretion of the materials that can make the rocky cores with which planets start, astronomers wondered when in the history of the Galaxy, planet formation would turn on.

The star Kepler-444 has shed some light on this question. This is a tightly packed system of five planets—the smallest comparable in size to Mercury and the largest similar in size to Venus. All five planets were detected with the Kepler spacecraft as they transited their parent star. All five planets orbit their host star in less than the time it takes Mercury to complete one orbit about the Sun. Remarkably, the host star Kepler-444 is more than 11 billion years old and formed when the Milky Way was only 2 billion years old. So the heavier elements needed to make rocky planets must have already been available then. This ancient planetary system sets the clock on the beginning of rocky planet formation to be relatively soon after the formation of our Galaxy.

There is some evidence from the motions in the outer solar system that Jupiter may have migrated inward long ago. If correct, then gravitational perturbations from Jupiter could have dislodged the orbits of close-in rocky planets, causing them to fall into the Sun. Consistent with this picture, astronomers now think that Uranus and Neptune probably did not form at their present distances from the Sun but rather closer to where Jupiter and Saturn are now. The reason for this idea is that density in the disk of matter surrounding the Sun at the time the planets formed was so low outside the orbit of Saturn that it would take several billion years to build up Uranus and Neptune. Yet we saw earlier in the chapter that the disks around protostars survive only a few million years.

Therefore, scientists have developed computer models demonstrating that Uranus and Neptune could have formed near the current locations of Jupiter and Saturn, and then been kicked out to larger distances through gravitational interactions with their neighbors. All these wonderful new observations illustrate how dangerous it can be to draw conclusions about a phenomenon in science (in this case, how planetary systems form and arrange themselves) when you are only working with a single example.

Exoplanets have given rise to a new picture of planetary system formation—one that is much more chaotic than we originally thought. If we think of the planets as being like skaters in a rink, our original model (with only our own solar system as a guide) assumed that the planets behaved like polite skaters, all obeying the rules of the rink and all moving in nearly the same direction, following roughly circular paths. The new picture corresponds more to a roller derby, where the skaters crash into one another, change directions, and sometimes are thrown entirely out of the rink.

While thousands of exoplanets have been discovered in the past two decades, every observational technique has fallen short of finding more than a few candidates that resemble Earth (Figure 1). Astronomers are not sure exactly what properties would define another Earth. Do we need to find a planet that is exactly the same size and mass as Earth? That may be difficult and may not be important from the perspective of habitability. After all, we have no reason to think that life could not have arisen on Earth if our planet had been a little bit smaller or larger. And, remember that how habitable a planet is depends on both its distance from its star and the nature of its atmosphere. The greenhouse effect can make some planets warmer (as it did for Venus and is doing more and more for Earth). 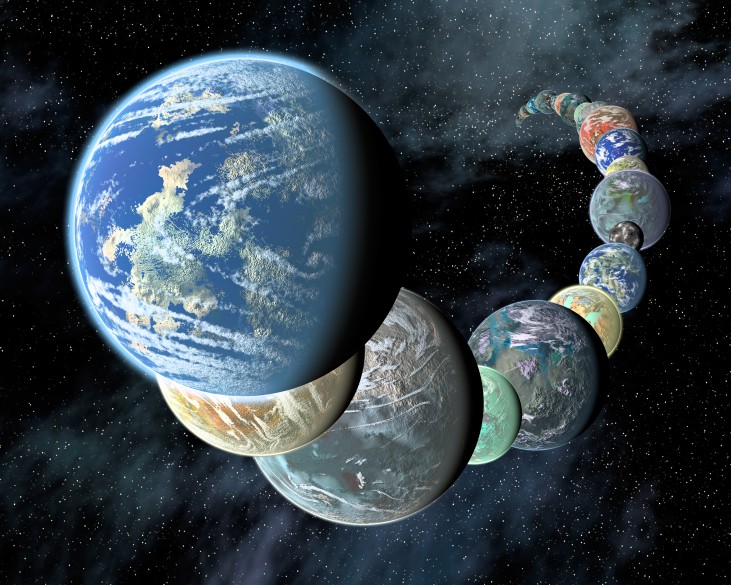 Figure 1: Many Earthlike Planets. This painting, commissioned by NASA, conveys the idea that there may be many planets resembling Earth out there as our methods for finding them improve. (credit: NASA/JPL-Caltech/R. Hurt (SSC-Caltech))

We can ask other questions to which we don’t yet know the answers. Does this "twin" of Earth need to orbit a solar-type star, or can we consider as candidates the numerous exoplanets orbiting K- and M-class stars? (In the summer of 2016, astronomers reported the discovery of a planet with at least 1.3 times the mass of Earth around the nearest star, Proxima Centauri, which is spectral type M and located 4.2 light years from us.) We have a special interest in finding planets that could support life like ours, in which case, we need to find exoplanets within their star’s habitable zone, where surface temperatures are consistent with liquid water on the surface. This is probably the most important characteristic defining an Earth-analog exoplanet.

The search for potentially habitable worlds is one of the prime drivers for exoplanet research in the next decade. Astronomers are beginning to develop realistic plans for new instruments that can even look for signs of life on distant worlds (examining their atmospheres for gases associated with life, for example). If we require telescopes in space to find such worlds, we need to recognize that years are required to plan, build, and launch such space observatories. The discovery of exoplanets and the knowledge that most stars have planetary systems are transforming our thinking about life beyond Earth. We are closer than ever to knowing whether habitable (and inhabited) planets are common. This work lends a new spirit of optimism to the search for life elsewhere, a subject to which we will return in Life in the Universe.

The ensemble of exoplanets is incredibly diverse and has led to a revision in our understanding of planet formation that includes the possibility of vigorous, chaotic interactions, with planet migration and scattering. It is possible that the solar system is unusual (and not representative) in how its planets are arranged. Many systems seem to have rocky planets farther inward than we do, for example, and some even have "hot Jupiters" very close to their star. Ambitious space experiments should make it possible to image earthlike planets outside the solar system and even to obtain information about their habitability as we search for life elsewhere.

22 The loose ends of planet formation

Chapter 5 Notes on Formation of Stars and Planets

COMMUNICAT 2018 •  The University of Nairobi

A New Perspective on the Myth of Creation.docx

Formation of Terrestrial and Jovian Planets

Pai does well in bringing about new perspective in Kochoson studies.docx

A New Perspective on Coalitions What Motivates Membership_ (1). pdf.pdf