Newton’s laws of motion show that objects at rest will stay at rest and those in motion will continue moving uniformly in a straight line unless acted upon by a force. Thus, it is the straight line that defines the most natural state of motion. But the planets move in ellipses, not straight lines; therefore, some force must be bending their paths. That force, Newton proposed, was gravity.

In Newton’s time, gravity was something associated with Earth alone. Everyday experience shows us that Earth exerts a gravitational force upon objects at its surface. If you drop something, it accelerates toward Earth as it falls. Newton’s insight was that Earth’s gravity might extend as far as the Moon and produce the force required to curve the Moon’s path from a straight line and keep it in its orbit. He further hypothesized that gravity is not limited to Earth, but that there is a general force of attraction between all material bodies. If so, the attractive force between the Sun and each of the planets could keep them in their orbits. (This may seem part of our everyday thinking today, but it was a remarkable insight in Newton’s time.)

Once Newton boldly hypothesized that there was a universal attraction among all bodies everywhere in space, he had to determine the exact nature of the attraction. The precise mathematical description of that gravitational force had to dictate that the planets move exactly as Kepler had described them to (as expressed in Kepler’s three laws). Also, that gravitational force had to predict the correct behavior of falling bodies on Earth, as observed by Galileo. How must the force of gravity depend on distance in order for these conditions to be met?

The answer to this question required mathematical tools that had not yet been developed, but this did not deter Isaac Newton, who invented what we today call calculus to deal with this problem. Eventually he was able to conclude that the magnitude of the force of gravity must decrease with increasing distance between the Sun and a planet (or between any two objects) in proportion to the inverse square of their separation. In other words, if a planet were twice as far from the Sun, the force would be (1/2)2, or 1/4 as large. Put the planet three times farther away, and the force is (1/3)2, or 1/9 as large.


Fgravity​=GR2M1​M2​​
where Fgravity is the gravitational force between two objects, M1 and M2 are the masses of the two objects, and R is their separation. G is a constant number known as the universal gravitational constant, and the equation itself symbolically summarizes Newton’s universal law of gravitation. With such a force and the laws of motion, Newton was able to show mathematically that the only orbits permitted were exactly those described by Kepler’s laws.

Newton’s universal law of gravitation works for the planets, but is it really universal? The gravitational theory should also predict the observed acceleration of the Moon toward Earth as it orbits Earth, as well as of any object (say, an apple) dropped near Earth’s surface. The falling of an apple is something we can measure quite easily, but can we use it to predict the motions of the Moon?

Recall that according to Newton’s second law, forces cause acceleration. Newton’s universal law of gravitation says that the force acting upon (and therefore the acceleration of) an object toward Earth should be inversely proportional to the square of its distance from the center of Earth. Objects like apples at the surface of Earth, at a distance of one Earth-radius from the center of Earth, are observed to accelerate downward at 9.8 meters per second per second (9.8 m/s2).

It is this force of gravity on the surface of Earth that gives us our sense of weight. Unlike your mass, which would remain the same on any planet or moon, your weight depends on the local force of gravity. So you would weigh less on Mars and the Moon than on Earth, even though there is no change in your mass. (Which means you would still have to go easy on the desserts in the college cafeteria when you got back!)

The Moon is 60 Earth radii away from the center of Earth. If gravity (and the acceleration it causes) gets weaker with distance squared, the acceleration the Moon experiences should be a lot less than for the apple. The acceleration should be (1/60)2 = 1/3600 (or 3600 times less—about 0.00272 m/s2. This is precisely the observed acceleration of the Moon in its orbit. (As we shall see, the Moon does not fall to Earth with this acceleration, but falls around Earth.) Imagine the thrill Newton must have felt to realize he had discovered, and verified, a law that holds for Earth, apples, the Moon, and, as far as he knew, everything in the universe.

By what factor would a person’s weight at the surface of Earth change if Earth had its present mass but eight times its present volume?

With eight times the volume, Earth’s radius would double. This means the gravitational force at the surface would reduce by a factor of (1/2)2 = 1/4, so a person would weigh only one-fourth as much.

By what factor would a person’s weight at the surface of Earth change if Earth had its present size but only one-third its present mass?

With one-third its present mass, the gravitational force at the surface would reduce by a factor of 1/3, so a person would weight only one-third as much.

Gravity is a "built-in" property of mass. Whenever there are masses in the universe, they will interact via the force of gravitational attraction. The more mass there is, the greater the force of attraction. Here on Earth, the largest concentration of mass is, of course, the planet we stand on, and its pull dominates the gravitational interactions we experience. But everything with mass attracts everything else with mass anywhere in the universe.

Newton’s law also implies that gravity never becomes zero. It quickly gets weaker with distance, but it continues to act to some degree no matter how far away you get. The pull of the Sun is stronger at Mercury than at Pluto, but it can be felt far beyond Pluto, where astronomers have good evidence that it continuously makes enormous numbers of smaller icy bodies move around huge orbits. And the Sun’s gravitational pull joins with the pull of billions of others stars to create the gravitational pull of our Milky Way Galaxy. That force, in turn, can make other smaller galaxies orbit around the Milky Way, and so on.

Why is it then, you may ask, that the astronauts aboard the Space Shuttle appear to have no gravitational forces acting on them when we see images on television of the astronauts and objects floating in the spacecraft? After all, the astronauts in the shuttle are only a few hundred kilometers above the surface of Earth, which is not a significant distance compared to the size of Earth, so gravity is certainly not a great deal weaker that much farther away. The astronauts feel "weightless" (meaning that they don’t feel the gravitational force acting on them) for the same reason that passengers in an elevator whose cable has broken or in an airplane whose engines no longer work feel weightless: they are falling (Figure 1).[2] 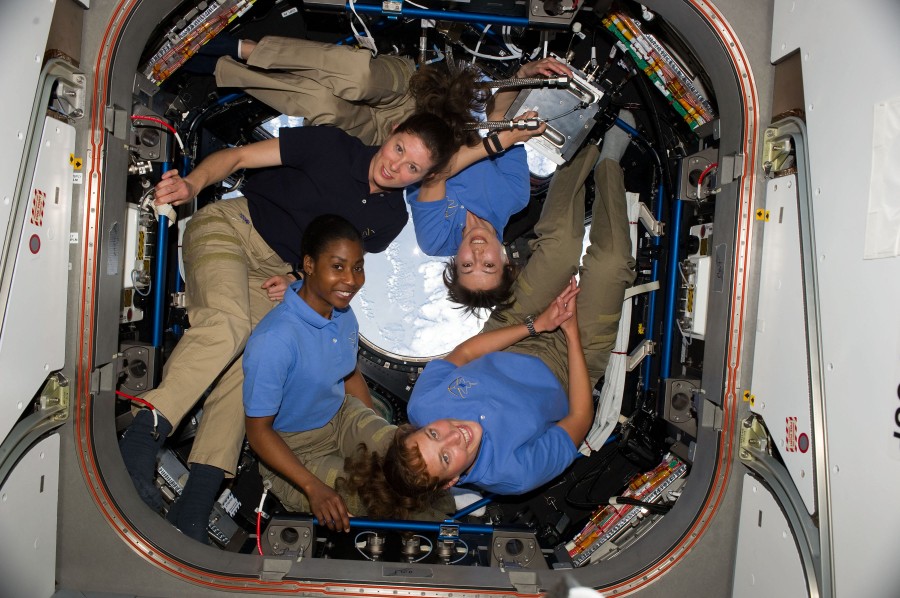 When falling, they are in free fall and accelerate at the same rate as everything around them, including their spacecraft or a camera with which they are taking photographs of Earth. When doing so, astronauts experience no additional forces and therefore feel "weightless." Unlike the falling elevator passengers, however, the astronauts are falling around Earth, not to Earth; as a result they will continue to fall and are said to be "in orbit" around Earth (see the next section for more about orbits).

Kepler’s laws describe the orbits of the objects whose motions are described by Newton’s laws of motion and the law of gravity. Knowing that gravity is the force that attracts planets toward the Sun, however, allowed Newton to rethink Kepler’s third law. Recall that Kepler had found a relationship between the orbital period of a planet’s revolution and its distance from the Sun. But Newton’s formulation introduces the additional factor of the masses of the Sun (M1) and the planet (M2), both expressed in units of the Sun’s mass. Newton’s universal law of gravitation can be used to show mathematically that this relationship is actually

How did Kepler miss this factor? In units of the Sun’s mass, the mass of the Sun is 1, and in units of the Sun’s mass, the mass of a typical planet is a negligibly small factor. This means that the sum of the Sun’s mass and a planet’s mass, (M1 + M2), is very, very close to 1. This makes Newton’s formula appear almost the same as Kepler’s; the tiny mass of the planets compared to the Sun is the reason that Kepler did not realize that both masses had to be included in the calculation. There are many situations in astronomy, however, in which we do need to include the two mass terms—for example, when two stars or two galaxies orbit each other.

Including the mass term allows us to use this formula in a new way. If we can measure the motions (distances and orbital periods) of objects acting under their mutual gravity, then the formula will permit us to deduce their masses. For example, we can calculate the mass of the Sun by using the distances and orbital periods of the planets, or the mass of Jupiter by noting the motions of its moons.

Indeed, Newton’s reformulation of Kepler’s third law is one of the most powerful concepts in astronomy. Our ability to deduce the masses of objects from their motions is key to understanding the nature and evolution of many astronomical bodies. We will use this law repeatedly throughout this text in calculations that range from the orbits of comets to the interactions of galaxies.

Example 2: Calculating the Effects of Gravity

A planet like Earth is found orbiting its star at a distance of 1 AU in 0.71 Earth-year. Can you use Newton’s version of Kepler’s third law to find the mass of the star? (Remember that compared to the mass of a star, the mass of an earthlike planet can be considered negligible.)

Suppose a star with twice the mass of our Sun had an earthlike planet that took 4 years to orbit the star. At what distance (semimajor axis) would this planet orbit its star?

You might like to try a simulation that lets you move the Sun, Earth, Moon, and space station to see the effects of changing their distances on their gravitational forces and orbital paths. You can even turn off gravity and see what happens.

Gravity, the attractive force between all masses, is what keeps the planets in orbit. Newton’s universal law of gravitation relates the gravitational force to mass and distance:


Fgravity​=GR2M1​M2​​
The force of gravity is what gives us our sense of weight. Unlike mass, which is constant, weight can vary depending on the force of gravity (or acceleration) you feel. When Kepler’s laws are reexamined in the light of Newton’s gravitational law, it becomes clear that the masses of both objects are important for the third law, which becomes a3 = (M1+ M2) × P2. Mutual gravitational effects permit us to calculate the masses of astronomical objects, from comets to galaxies.

gravity: the mutual attraction of material bodies or particles

Chapter outline((cited from wikipedia (helped me)))

AST 1002 •  Brooklyn Academy Of Science And The Environment