The Sun: A Garden-Variety Star

Solar Activity above the Photosphere


Sunspots are not the only features that vary during a solar cycle. There are dramatic changes in the chromosphere and corona as well. To see what happens in the chromosphere, we must observe the emission lines from elements such as hydrogen and calcium, which emit useful spectral lines at the temperatures in that layer. The hot corona, on the other hand, can be studied by observations of X-rays and of extreme ultraviolet and other wavelengths at high energies.

Figure 1. Plages on the Sun: This image of the Sun was taken with a filter that transmits only the light of the spectral line produced by singly ionized calcium. The bright cloud-like regions are the plages. (credit: modification of work by NASA)

As we saw, emission lines of hydrogen and calcium are produced in the hot gases of the chromosphere. Astronomers routinely photograph the Sun through filters that transmit light only at the wavelengths that correspond to these emission lines. Pictures taken through these special filters show bright "clouds" in the chromosphere around sunspots; these bright regions are known as plages (Figure 1). These are regions within the chromosphere that have higher temperature and density than their surroundings. The plages actually contain all of the elements in the Sun, not just hydrogen and calcium. It just happens that the spectral lines of hydrogen and calcium produced by these clouds are bright and easy to observe.

Moving higher into the Sun’s atmosphere, we come to the spectacular phenomena called prominences (Figure 2) which usually originate near sunspots. Eclipse observers often see prominences as red features rising above the eclipsed Sun and reaching high into the corona. Some, the quiescent prominences, are graceful loops of plasma (ionized gas) that can remain nearly stable for many hours or even days. The relatively rare eruptive prominences appear to send matter upward into the corona at high speeds, and the most active surge prominences may move as fast as 1300 kilometers per second (almost 3 million miles per hour). Some eruptive prominences have reached heights of more than 1 million kilometers above the photosphere; Earth would be completely lost inside one of those awesome displays (Figure 2).

Figure 2. Prominences: (a) This image of an eruptive prominence was taken in the light of singly ionized helium in the extreme ultraviolet part of the spectrum. The prominence is a particularly large one. An image of Earth is shown at the same scale for comparison. (b) A prominence is a huge cloud of relatively cool (about 60,000 K in this case), fairly dense gas suspended in the much hotter corona. These pictures, taken in ultraviolet, are color coded so that white corresponds to the hottest temperatures and dark red to cooler ones. The four images were taken, moving clockwise from the upper left, on May 15, 2001; March 28, 2000; January 18, 2000; and February 2, 2001. (credit a: modification of work by NASA/SOHO; credit b: modification of work by NASA/SDO) 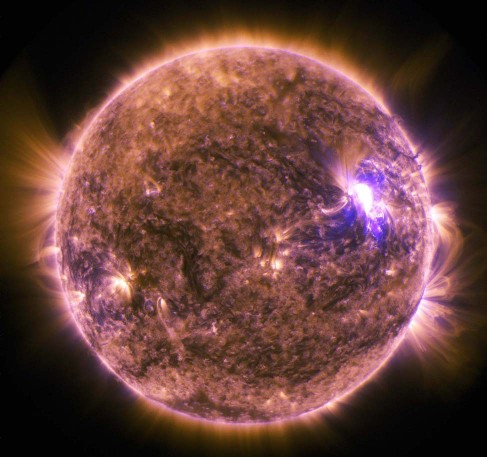 Figure 3. Solar Flare: The bright white area seen on the right side of the Sun in this image from the Solar Dynamics Observer spacecraft is a solar flare that was observed on June 25, 2015. (credit: NASA/SDO)

The most violent event on the surface of the Sun is a rapid eruption called a solar flare (Figure 3). A typical flare lasts for 5 to 10 minutes and releases a total amount of energy equivalent to that of perhaps a million hydrogen bombs. The largest flares last for several hours and emit enough energy to power the entire United States at its current rate of electrical consumption for 100,000 years. Near sunspot maximum, small flares occur several times per day, and major ones may occur every few weeks.

Flares, like the one shown in [link], are often observed in the red light of hydrogen, but the visible emission is only a tiny fraction of the energy released when a solar flare explodes. At the moment of the explosion, the matter associated with the flare is heated to temperatures as high as 10 million K. At such high temperatures, a flood of X-ray and ultraviolet radiation is emitted.

Flares seem to occur when magnetic fields pointing in opposite directions release energy by interacting with and destroying each other—much as a stretched rubber band releases energy when it breaks.

What is different about flares is that their magnetic interactions cover a large volume in the solar corona and release a tremendous amount of electromagnetic radiation. In some cases, immense quantities of coronal material—mainly protons and electrons—may also be ejected at high speeds (500–1000 kilometers per second) into interplanetary space. Such a coronal mass ejection (CME) can affect Earth in a number of ways (which we will discuss in the section on space weather).

Figure 4. Flare and Coronal Mass Ejection: This sequence of four images shows the evolution over time of a giant eruption on the Sun. (a) The event began at the location of a sunspot group, and (b) a flare is seen in far-ultraviolet light. (c) Fourteen hours later, a CME is seen blasting out into space. (d) Three hours later, this CME has expanded to form a giant cloud of particles escaping from the Sun and is beginning the journey out into the solar system. The white circle in (c) and (d) shows the diameter of the solar photosphere. The larger dark area shows where light from the Sun has been blocked out by a specially designed instrument to make it possible to see the faint emission from the corona. (credit a, b, c, d: modification of work by SOHO/EIT, SOHO/LASCO, SOHO/MDI (ESA & NASA)) 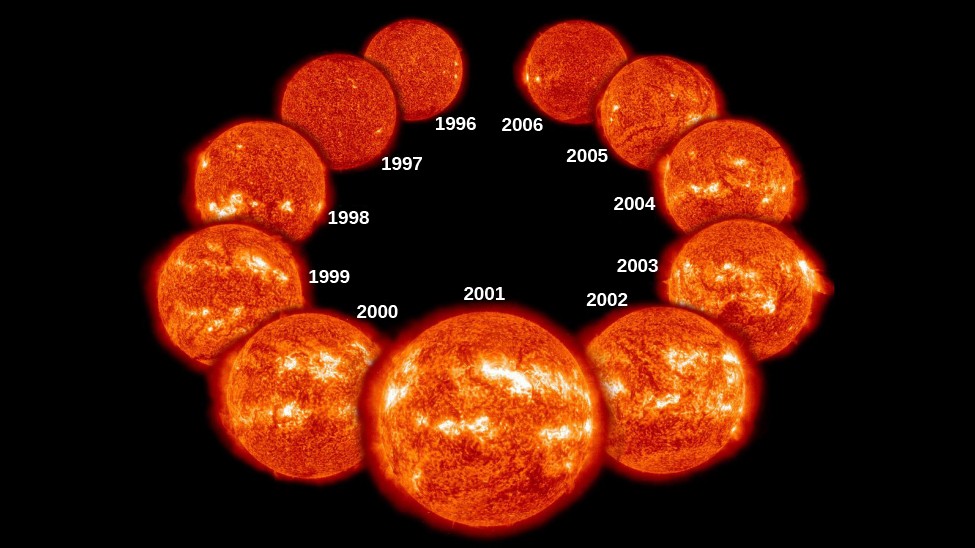 Figure 5. Solar Cycle: This dramatic sequence of images taken from the SOHO satellite over a period of 11 years shows how active regions change during the solar cycle. The images were taken in the ultraviolet region of the spectrum and show that active regions on the Sun increase and decrease during the cycle. Sunspots are located in the cooler photosphere, beneath the hot gases shown in this image, and vary in phase with the emission from these hot gases—more sunspots and more emission from hot gases occur together. (credit: modification of work by ESA/NASA/SOHO)

To bring the discussion of the last two sections together, astronomers now realize that sunspots, flares, and bright regions in the chromosphere and corona tend to occur together on the Sun in time and space. That is, they all tend to have similar longitudes and latitudes, but they are located at different heights in the atmosphere. Because they all occur together, they vary with the sunspot cycle.

Figure 6. Solar Active Region Observed at Different Heights in the Sun’s Atmosphere: These four images of a solar flare on October 22, 2012, show from the left: light from the Sun at a wavelength of 171 angstroms, which shows the structure of loops of solar material in the corona; ultraviolet at 304 angstroms, which shows light from the region of the Sun’s atmosphere where flares originate; light at 335 angstroms, which highlights radiation from active regions in the corona; a magnetogram, which shows magnetically active regions on the Sun. Note how these different types of activity all occur above a sunspot region with a strong magnetic field. (credit: modification of work by NASA/SDO/Goddard)

For example, flares are more likely to occur near sunspot maximum, and the corona is much more conspicuous at that time (see Figure 5). A place on the Sun where a number of these phenomena are seen is called an active region (Figure 6). As you might deduce from our earlier discussion, active regions are always associated with strong magnetic fields.

Signs of more intense solar activity, an increase in the number of sunspots, as well as prominences, plages, solar flares, and coronal mass ejections, all tend to occur in active regions—that is, in places on the Sun with the same latitude and longitude but at different heights in the atmosphere. Active regions vary with the solar cycle, just like sunspots do.

active region: an area on the Sun where magnetic fields are concentrated; sunspots, prominences, flares, and CMEs all tend to occur in active regions

plage: a bright region of the solar surface observed in the light of some spectral line

prominence: a large, bright, gaseous feature that appears above the surface of the Sun and extends into the corona

solar flare: a sudden and temporary outburst of electromagnetic radiation from an extended region of the Sun’s surface

Rowland likewise suggests a variety of the activity above.docx

Following completion of all of the activities above.docx

Which way do most objects travel when viewed from far above the North Pole of Earth.docx