Controlling involves ensuring that performance does not deviate from standards. Controlling consists of five steps: (1) set standards, (2) measure performance, (3) compare performance to standards, (4) determine the reasons for deviations and then (5) take corrective action as needed (see Figure 1, below). Corrective action can include changes made to the performance standards—setting them higher or lower or identifying new or additional standards. Performance standards are often stated in monetary terms such as revenue, costs, or profits but may also be stated in other terms, such as units produced, number of defective products, or levels of quality or customer service. 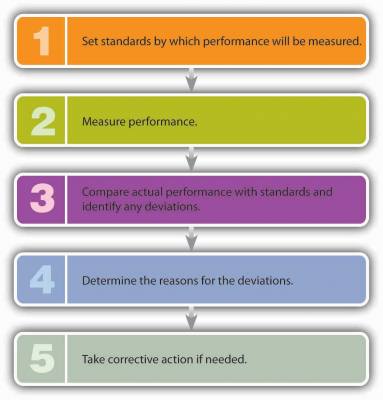 The measurement of performance can be done in several ways, depending on the performance standards, including financial statements, sales reports, production results, customer satisfaction, and formal performance appraisals. Managers at all levels engage in the managerial function of controlling to some degree.

The managerial function of controlling should not be confused with control in the behavioral or manipulative sense. This function does not imply that managers should attempt to control or to manipulate the personalities, values, attitudes, or emotions of their subordinates. Instead, this function of management concerns the manager’s role in taking necessary actions to ensure that the work-related activities of subordinates are consistent with and contributing toward the accomplishment of organizational and departmental objectives.

Effective controlling requires the existence of plans, since planning provides the necessary performance standards or objectives. Controlling also requires a clear understanding of where responsibility for deviations from standards lies. Two traditional control techniques are budget and performance audits. An audit involves an examination and verification of records and supporting documents. A budget audit provides information about where the organization is with respect to what was planned or budgeted for, whereas a performance audit might try to determine whether the figures reported are a reflection of actual performance. Although controlling is often thought of in terms of financial criteria, managers must also control production and operations processes, procedures for delivery of services, compliance with company policies, and many other activities within the organization.

Financial costs—direct (i.e., paying for an accountant for an audit) and indirect (i.e., people employed by the organization whose primary function is related to control—internal quality control, for instance).

Culture and reputation costs—the intangible costs associated with any form of control. Examples include damaged relationships with employees or tarnished reputation with investors or government.

Responsiveness costs—downtime between a decision and the actions required to implement it due to compliance with controls.

Cost and productivity control—ensures that the firm functions effectively and efficiently.

Opportunity recognition—helps managers identify and isolate the source of positive surprises, such as a new growth market. Though opportunities can also be found in internal comparisons of cost control and productivity across units.

Manage uncertainty and complexity—keeps the organization focused on its strategy, and helps managers anticipate and detect negative surprises and respond opportunistically to positive surprises.

Decentralized decision making—allows the organization to be more responsive by moving decision making to those closest to customers and areas of uncertainty.

The management functions of planning, organizing, leading, and controlling are widely considered to be the best means of describing the manager’s job, as well as the best way to classify accumulated knowledge about the study of management. Although there have been tremendous changes in the environment faced by managers and the tools used by managers to perform their roles, managers still perform these essential functions.

The control function can be viewed as a five-step process: (1) Establish standards, (2) Measure performance, (3) Compare actual performance with standards and identify any deviations, (4) Determine the reason for deviations, and (5) Take corrective action, if needed.