Like many groups this section discusses, Asian Americans represent a great diversity of cultures and backgrounds. The experience of a Japanese American whose family has been in the United States for three generations will be drastically different from a Laotian American who has only been in the United States for a few years. This section primarily discusses Chinese, Japanese, and Vietnamese immigrants and shows the differences between their experiences. The most recent estimate from the U.S. Census Bureau (2014) suggest about 5.3 percent of the population identify themselves as Asian.

How and Why They Came

The national and ethnic diversity of Asian American immigration history is reflected in the variety of their experiences in joining U.S. society. Asian immigrants have come to the United States in waves, at different times, and for different reasons.

The first Asian immigrants to come to the United States in the mid-nineteenth century were Chinese. These immigrants were primarily men whose intention was to work for several years in order to earn incomes to support their families in China. Their main destination was the American West, where the Gold Rush was drawing people with its lure of abundant money. The construction of the Transcontinental Railroad was underway at this time, and the Central Pacific section hired thousands of migrant Chinese men to complete the laying of rails across the rugged Sierra Nevada mountain range. Chinese men also engaged in other manual labor like mining and agricultural work. The work was grueling and underpaid, but like many immigrants, they persevered.

Japanese immigration began in the 1880s, on the heels of the Chinese Exclusion Act of 1882. Many Japanese immigrants came to Hawaii to participate in the sugar industry; others came to the mainland, especially to California. Unlike the Chinese, however, the Japanese had a strong government that negotiated with the U.S. government to ensure the well-being of their immigrants. Japanese men were able to bring their wives and families to the United States, and were thus able to produce second- and third-generation Japanese Americans more quickly than their Chinese counterparts.

The most recent large-scale Asian immigration came from Korea and Vietnam and largely took place during the second half of the twentieth century. While Korean immigration has been fairly gradual, Vietnamese immigration occurred primarily post-1975, after the fall of Saigon and the establishment of restrictive communist policies in Vietnam. Whereas many Asian immigrants came to the United States to seek better economic opportunities, Vietnamese immigrants came as political refugees, seeking asylum from harsh conditions in their homeland. The Refugee Act of 1980 helped them to find a place to settle in the United States. 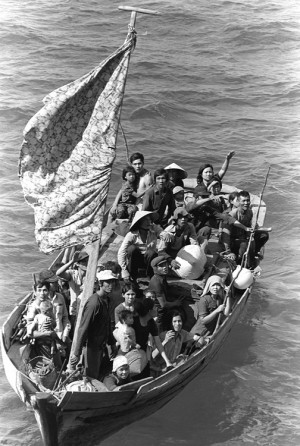 Thirty-five Vietnamese refugees wait to be taken aboard the amphibious USS Blue Ridge (LCC-19). They are being rescued from a thirty-five-foot fishing boat 350 miles northeast of Cam Ranh Bay, Vietnam, after spending eight days at sea. (Photo courtesy of U.S. Navy/Wikimedia Commons)

Chinese immigration came to an abrupt end with the Chinese Exclusion Act of 1882. This act was a result of anti-Chinese sentiment burgeoned by a depressed economy and loss of jobs. White workers blamed Chinese migrants for taking jobs, and the passage of the Act meant the number of Chinese workers decreased. Chinese men did not have the funds to return to China or to bring their families to the United States, so they remained physically and culturally segregated in the Chinatowns of large cities. Later legislation, the Immigration Act of 1924, further curtailed Chinese immigration. The Act included the race-based National Origins Act, which was aimed at keeping U.S. ethnic stock as undiluted as possible by reducing “undesirable” immigrants. It was not until after the Immigration and Nationality Act of 1965 that Chinese immigration again increased, and many Chinese families were reunited.

Although Japanese Americans have deep, long-reaching roots in the United States, their history here has not always been smooth. The California Alien Land Law of 1913 was aimed at them and other Asian immigrants, and it prohibited aliens from owning land. An even uglier action was the Japanese internment camps of World War II, discussed earlier as an illustration of expulsion.

Asian Americans certainly have been subject to their share of racial prejudice, despite the seemingly positive stereotype as the model minority. The model minority stereotype is applied to a minority group that is seen as reaching significant educational, professional, and socioeconomic levels without challenging the existing establishment.

This stereotype is typically applied to Asian groups in the United States, and it can result in unrealistic expectations, by putting a stigma on members of this group that do not meet the expectations. Stereotyping all Asians as smart and capable can also lead to a lack of much-needed government assistance and to educational and professional discrimination.

1. Which subordinate group is often referred to as the “model minority?”

model minority:the stereotype applied to a minority group that is seen as reaching higher educational, professional, and socioeconomic levels without protest against the majority establishment