Again, I want you to understand the story in which our Wagnerian aria is set. The opera is based on a medieval German telling of an ancient Celtic legend set in the British Isles. Lots of sword fighting, betrayal, magic potions, and doomed lovers. The "Liebestod," the piece on our playlist, is the final aria from the opera.

Tristan und Isolde (Tristan and Isolde, or Tristan and Isolda, or Tristran and Ysolt) is an opera, or music drama, in three acts by Richard Wagner to a German libretto by the composer, based largely on the romance by Gottfried von Straßburg. It was composed between 1857 and 1859 and premiered at the Königliches Hof- und Nationaltheater in Munich on 10 June 1865 with Hans von Bülow conducting. Wagner referred to the work not as an opera, but called it "eine Handlung" (literally a drama, a plot or an action), which was the equivalent of the term used by the Spanish playwright Calderón for his dramas.

Wagner's composition of Tristan und Isolde was inspired by the philosophy of Arthur Schopenhauer (particularly The World as Will and Representation) and Wagner's affair with Mathilde Wesendonck. Widely acknowledged as one of the peaks of the operatic repertoire,Tristan was notable for Wagner's unprecedented use of chromaticism, tonality, orchestral colour and harmonic suspension.

The opera was enormously influential among Western classical composers and provided direct inspiration to composers such as Gustav Mahler, Richard Strauss, Karol Szymanowski, Alban Berg, Arnold Schoenberg and Benjamin Britten. Other composers like Claude Debussy, Maurice Ravel and Igor Stravinsky formulated their styles in contrast to Wagner's musical legacy. Many see Tristan as the beginning of the move away from common practice harmony and tonality and consider that it lays the groundwork for the direction of classical music in the 20th century. Both Wagner's libretto style and music were also profoundly influential on the Symbolist poets of the late 19th century and early 20th century. 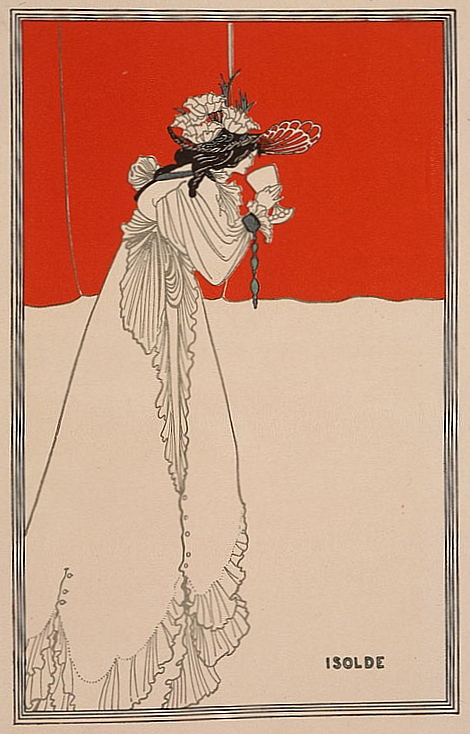 Figure 1. Isolde by Aubrey Beardsley, 1895 illustration for The Studio magazine of the tragic opera heroine drinking the love potion

Isolde, promised to King Marke in marriage, and her handmaid, Brangäne, are quartered aboard Tristan's ship being transported to the king's lands in Cornwall. The opera opens with the voice of a young sailor singing of a "wild Irish maid," ("West-wärts schweift der Blick") which Isolde construes to be a mocking reference to herself. In a furious outburst, she wishes the seas to rise up and sink the ship, killing herself and all on board ("Erwache mir wieder, kühne Gewalt"). Her scorn and rage are directed particularly at Tristan, the knight responsible for taking her to Marke, and Isolde sends Brangäne to command Tristan to appear before her ("Befehlen liess' dem Eigenholde"). Tristan, however, refuses Brangäne's request, claiming that his place is at the helm. His henchman, Kurwenal, answers more brusquely, saying that Isolde is in no position to command Tristan and reminds Brangäne that Isolde's previous fiancé, Morold, was killed by Tristan ("Herr Morold zog zu Meere her.")

Brangäne returns to Isolde to relate these events, and Isolde, in what is termed the "narrative and curse," sadly tells her of how, following the death of Morold, she happened upon a stranger who called himself Tantris. Tantris was found mortally wounded in a barge ("von einem Kahn, der klein und arm"), Isolde used her healing powers to restore him to health. She discovered during Tantris' recovery, however, that he was actually Tristan, the murderer of her fiancé. Isolde attempted to kill the man with his own sword as he lay helpless before her. However, Tristan looked not at the sword that would kill him or the hand that wielded the sword, but into her eyes ("Er sah' mir in die Augen"). His action pierced her heart and she was unable to slay him. Tristan was allowed to leave with the promise never to come back, but he later returned with the intention of marrying Isolde to his uncle, King Marke. Isolde, furious at Tristan's betrayal, insists that he drink atonement to her, and from her medicine-chest produces a vial to make the drink. Brangäne is shocked to see that it is a lethal poison.

Kurwenal appears in the women's quarters ("Auf auf! Ihr Frauen!") and announces that the voyage is coming to an end, Isolde warns Kurwenal that she will not appear before the King if Tristan does not come before her as she had previously ordered and drink atonement to her. When Tristan arrives, Isolde reproaches him about his conduct and tells him that he owes her his life and how his actions have undermined her honour, since she blessed Morold's weapons before battle and therefore she swore revenge. Tristan first offers his sword but Isolde refuses, they must drink atonement. Brangäne brings in the potion that will seal their pardon, Tristan knows that it may kill him, since he knows Isolde's magic powers ("Wohl kenn' ich Irland's Königin"). The journey is almost at its end, Tristan drinks and Isolde takes half the potion for herself. The potion seems to work but it does not bring death but relentless love ("Tristan! Isolde!"). Kurwenal, who announces the imminent arrival on board of King Marke, interrupts their rapture. Isolde asks Brangäne which potion she prepared and Brangäne replies, as the sailors hail the arrival of King Marke, that it was not poison, but rather a love potion.

King Marke leads a hunting party out into the night, leaving Isolde and Brangäne alone in the castle, who both stand beside a burning brazier. Isolde, listening to the hunting horns, believes several times that the hunting party is far enough away to warrant the extinguishing of the brazier—the prearranged signal for Tristan to join her ("Nicht Hörnerschall tönt so hold"). Brangäne warns Isolde that Melot, one of King Marke's knights, has seen the amorous looks exchanged between Tristan and Isolde and suspects their passion ("Ein Einz'ger war's, ich achtet' es wohl"). Isolde, however, believes Melot to be Tristan's most loyal friend, and, in a frenzy of desire, extinguishes the flames. Brangäne retires to the ramparts to keep watch as Tristan arrives.

The lovers, at last alone and freed from the constraints of courtly life, declare their passion for each other. Tristan decries the realm of daylight which is false, unreal, and keeps them apart. It is only in night, he claims, that they can truly be together and only in the long night of death can they be eternally united ("O sink' hernieder, Nacht der Liebe"). During their long tryst, Brangäne calls a warning several times that the night is ending ("Einsam wachend in der Nacht"), but her cries fall upon deaf ears. The day breaks in on the lovers as Melot leads King Marke and his men to find Tristan and Isolde in each other's arms. Marke is heart-broken, not only because of his nephew's betrayal but also because Melot chose to betray his friend Tristan to Marke and because of Isolde's betrayal as well ("Mir - dies? Dies, Tristan - mir?").

When questioned, Tristan says he cannot answer to the King the reason of his betrayal since he would not understand, he turns to Isolde, who agrees to follow him again into the realm of night. Tristan announces that Melot has fallen in love with Isolde too. Melot and Tristan fight, but, at the crucial moment, Tristan throws his sword aside and allows Melot to severely wound him.

Kurwenal has brought Tristan home to his castle at Kareol in Brittany. A shepherd pipes a mournful tune and asks if Tristan is awake. Kurwenal replies that only Isolde's arrival can save Tristan, and the shepherd offers to keep watch and claims that he will pipe a joyful tune to mark the arrival of any ship. Tristan awakes ("Die alte Weise - was weckt sie mich?") and laments his fate — to be, once again, in the false realm of daylight, once more driven by unceasing unquenchable yearning ("Wo ich erwacht' Weilt ich nicht"). Tristan's sorrow ends when Kurwenal tells him that Isolde is on her way. Tristan, overjoyed, asks if her ship is in sight, but only a sorrowful tune from the shepherd's pipe is heard.

Tristan relapses and recalls that the shepherd's mournful tune is the same as was played when he was told of the deaths of his father and mother ("Muss ich dich so versteh'n, du alte, ernst Weise"). He rails once again against his desires and against the fateful love-potion ("verflucht sei, furchtbarer Trank!") until, exhausted, he collapses in delirium. After his collapse, the shepherd is heard piping the arrival of Isolde's ship, and, as Kurwenal rushes to meet her, Tristan tears the bandages from his wounds in his excitement ("Hahei! Mein Blut, lustig nun fliesse!"). As Isolde arrives at his side, Tristan dies with her name on his lips.

Isolde collapses beside her deceased lover just as the appearance of another ship is announced. Kurwenal spies Melot, Marke and Brangäne arriving ("Tod und Hölle! Alles zur Hand!"), he believes they have come to kill Tristan and, in an attempt to avenge him, furiously attacks Melot. Marke tries to stop the fight to no avail. Both Melot and Kurwenal are killed in the fight. Marke and Brangäne finally reach Tristan and Isolde. Marke, grieving over the body of his "truest friend" ("Tot denn alles!"), explains that Brangäne revealed the secret of the love-potion and has come not to part the lovers, but to unite them ("Warum Isolde, warum mir das?"). Isolde appears to wake at this and in a final aria describing her vision of Tristan risen again (the "Liebestod," "love death"), dies ("Mild und leise wie er lächelt").