At the end of this lesson, you should be able to: 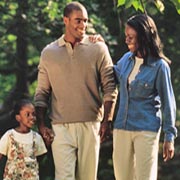 Welcome to life span, growth and development. This is the study of how and why people change or remain the same over time.

This course is commonly referred to as the “womb to tomb” course because it is the story of our journeys from conception to death. Human development is the study of how we change over time.  Although this course is often offered in psychology, this is a very interdisciplinary course. Psychologists, nutritionists, sociologists, anthropologists, educators, and health care professionals all contribute to our knowledge of the life span.

We will look at how we change physically over time from early development through aging and death. We examine cognitive change, or how our ability to think and remember changes over time. We look at how our concerns and psychological state is influenced by age and finally, how our social relationships change throughout life.

There are several goals of those involved in this discipline:

1. Describing change-many of the studies we will examine simply involve the first step in investigation, which is description. Arnold Gesell’s study on infant motor skills, for example.

2. Explaining changes is another goal. Theories provide explanations for why we change over time. For example, Erikson offers an explanation about why our two-year-old is temperamental.

Think about how you were 5, 10, or even 15 years ago.  In what ways have you changed?  In what ways have you remained the same?  You have probably changed physically; perhaps you've grown taller and become heavier.  But you may have also experienced changes in the way you think and solve problems.  Cognitive change is noticeable when we compare how 6 year olds, 16 year olds, and 46 year olds think and reason, for example.  Their thoughts about others and the world are probably quite different.  Consider friendship for instance.  The 6 year old may think that a friend is someone with whom you can play and have fun.  A 16 year old may seek friends who can help them gain status or popularity.  And the 46 year old may have acquaintances, but rely more on family members to do things with and confide in.  You may have also experienced psychosocial change.  This refers emotions and psychological concerns as well as social relationships.  Psychologist Erik Erikson suggests that we struggle with issues of independence, trust, and intimacy at various points in our lives.  (We will explore this thoroughly throughout the course.)

Our journeys through life are more than biological; they are shaped by culture, history, economic and political realities as much as they are influenced by physical change. This is a very interesting and practical course because it is about us and those with whom we live and work. One of the best ways to gain perspective on our own lives is to compare our experiences with that of others. By periodically making cross-cultural and historical comparisons and by presenting a variety of views on issues such as healthcare, aging, education, gender and family roles, I hope to give you many eyes with which to see your own development. This occurs frequently in the classroom as students from a variety of cultural backgrounds discuss their interpretations of developmental tasks and concerns. I hope to recreate this rich experience as much as possible in this text. So, for example, we will discuss current concerns about the nutrition of children in the United States (for a middle-class boy of 11 years who is 130 pounds overweight and suffering with Pediatric Type II diabetes) as well as malnutrition experienced by children in Ethiopia as a result of drought. Being self-conscious can enhance our ability to think critically about the systems we live in and open our eyes to new courses of action to benefit the quality of life. And knowing about other people and their circumstances can help us live and work with them more effectively. An appreciation of diversity enhances the social skills needed in nursing, education, or any other field.

I took my first graduate course in life span over 20 years ago. Much time was spent on the period of childhood, less on adolescence, and very little attention was given to adulthood. The message was clear: once you are 25, your development is essentially completed. Our academic knowledge of the life span has changed and although there is still less research on adulthood than on childhood, adulthood is gaining increasing attention. This is particularly true now that the large cohort known as the baby boomers are beginning to enter late adulthood. There is so much we need to find out about love, housing, health, nutrition, exercise, social, and emotional development with this large group. (Visit your local bookstore or search the internet and you will find many new titles in the self-help and psychology sections that address this population.)

I was also introduced to the theories of Freud, Erikson, and Piaget, the classic stage theorists whose models depict development as occurring in a series of predictable stages. Stage theories had a certain appeal to an American culture experiencing dramatic change in the early part of the 20th century. But that sense of security was not without its costs; those who did not develop in predictable ways were often thought of as delayed or abnormal. And Freudian interpretations of problems in childhood development, such as autism, held that such difficulties were in response to poor parenting.   Imagine the despair experienced by mothers accused of causing their child’s autism by being cold and unloving. It was not until the 1960s that more medical explanations of autism began to replace Freudian assumptions.

Freud and Piaget present a series of stages that essentially end during adolescence. For Freud, we enter the genital stage in which much of our motivation is focused on sex and reproduction and this stage continues through adulthood. Piaget’s fourth stage, formal operational thought, begins in adolescence and continues through adulthood. Again, neither of these theories highlights developmental changes during adulthood. Erikson, however, presents eight developmental stages that encompass the entire lifespan. For that reason, Erikson is known as the “father” of developmental psychology and his psychosocial theory will form the foundation for much of our discussion of psychosocial development.

Today we are more aware of the variations in development and the impact that culture and the environment have on shaping our lives.   We no longer assume that those who develop in predictable ways are normal and those who do not are abnormal. And the assumption that early childhood experiences dictate our future is also being called into question. Rather, we have come to appreciate that growth and change continues throughout life and experience continues to have an impact on who we are and how we relate to others.  And we recognize that adulthood is a dynamic period of life marked by continued cognitive, social, and psychological development.

Many academic disciplines contribute to the study of life span and this course is offered in some schools as psychology; in other schools it is taught under sociology or human development. This multidisciplinary course is made up of contributions from researchers in the areas of health care, anthropology, nutrition, child development, biology, gerontology, psychology, and sociology among others. Consequently, the stories provided are rich and well-rounded and the theories and findings can be part of a collaborative effort to understand human lives.

People are best understood in context.  What is meant by the word “context”?  It means that we are influenced by when and where we live and our actions, beliefs, and values are a response to circumstances surrounding us.  Sternberg describes a type of intelligence known as “contextual” intelligence as the ability to understand what is called for in a situation (Sternberg, 1996). The key here is to understand that behaviors, motivations, emotions, and choices are all part of a bigger picture. Our concerns are such because of who we are socially, where we live, and when we live; they are part of a social climate and set of realities that surround us.  Our social locations include cohort, social class, gender, race, ethnicity, and age.  Let's explore two of these:  cohort and social class.

The secret life of the credit card. (2004). PBS: Public Broadcasting Service. Retrieved May 02, 2011, from http://www.pbs.org/cgi-registry/generic/trivia.cgi