Because complex Boolean statements can get tricky to think about, we can create a truth table to keep track of what truth values for the simple statements make the complex statement true and false

A table showing what the resulting truth value of a complex statement is for all the possible truth values for the simple statements.

Suppose you’re picking out a new couch, and your significant other says “get a sectional or something with a chaise.”

A truth table for this would look like this:

In the table, T is used for true, and F for false. In the first row, if S is true and C is also true, then the complex statement “S or C” is true. This would be a sectional that also has a chaise, which meets our desire.

Remember also that or in logic is not exclusive; if the couch has both features, it does meet the condition.


To shorthand our notation further, we’re going to introduce some symbols that are commonly used for and, or, and not.

The symbol ⋀ is used for and: A and B is notated A ⋀ B.

The symbol ⋁ is used for or: A or B is notated A ⋁ B

The symbol ~ is used for not: not A is notated ~A

In the previous example, the truth table was really just summarizing what we already know about how the or statement work. The truth tables for the basic and, or, and not statements are shown below.

Create a truth table for the statement A ⋀ ~(B ⋁ C)

It helps to work from the inside out when creating truth tables, and create tables for intermediate operations. We start by listing all the possible truth value combinations for A, B, and C.   Notice how the first column contains 4 Ts followed by 4 Fs, the second column contains 2 Ts, 2 Fs, then repeats, and the last column alternates. This pattern ensures that all combinations are considered. Along with those initial values, we’ll list the truth values for the innermost expression, B ⋁ C.

Next we can find the negation of B ⋁ C, working off the B ⋁ C column we just created.

It turns out that this complex expression is only true in one case: if A is true, B is false, and C is false.


When we discussed conditions earlier, we discussed the type where we take an action based on the value of the condition. We are now going to talk about a more general version of a conditional, sometimes called an implication.


Notice that the statement tells us nothing of what to expect if it is not raining. If the antecedent is false, then the implication becomes irrelevant.

A friend tells you that “if you upload that picture to Facebook, you’ll lose your job.” There are four possible outcomes:


In traditional logic, an implication is considered valid (true) as long as there are no cases in which the antecedent is true and the consequence is false. It is important to keep in mind that symbolic logic cannot capture all the intricacies of the English language.

We start by constructing a truth table for the antecedent.

Now we can build the truth table for the implication


For any implication, there are three related statements, the converse, the inverse, and the contrapositive.

The original implication is “if p then q”: p → q

Consider again the valid implication “If it is raining, then there are clouds in the sky.”

The converse would be “If there are clouds in the sky, it is raining.” This is certainly not always true.

The inverse would be “If it is not raining, then there are not clouds in the sky.” Likewise, this is not always true.

The contrapositive would be “If there are not clouds in the sky, then it is not raining.” This statement is valid, and is equivalent to the original implication.

A conditional statement and its contrapositive are logically equivalent.

The converse and inverse of a statement are logically equivalent.

A logical argument is a claim that a set of premises support a conclusion. There are two general types of arguments: inductive and deductive arguments.

An inductive argument uses a collection of specific examples as its premises and uses them to propose a general conclusion.

A deductive argument uses a collection of general statements as its premises and uses them to propose a specific situation as the conclusion.

I forgot my purse last week

I forgot my purse today

I always forget my purse

Notice that the premises are specific situations, while the conclusion is a general statement. In this case, this is a fairly weak argument, since it is based on only two instances.

The argument “every day for the past year, a plane flies over my house at 2pm. A plane will fly over my house every day at 2pm” is a stronger inductive argument, since it is based on a larger set of evidence.

An inductive argument is never able to prove the conclusion true, but it can provide either weak or strong evidence to suggest it may be true.


Many scientific theories, such as the big bang theory, can never be proven. Instead, they are inductive arguments supported by a wide variety of evidence. Usually in science, an idea is considered a hypothesis until it has been well tested, at which point it graduates to being considered a theory. The commonly known scientific theories, like Newton’s theory of gravity, have all stood up to years of testing and evidence, though sometimes they need to be adjusted based on new evidence. For gravity, this happened when Einstein proposed the theory of general relativity.

A deductive argument is more clearly valid or not, which makes them easier to evaluate.

All cats are mammals

A tiger is a cat

A tiger is a mammal 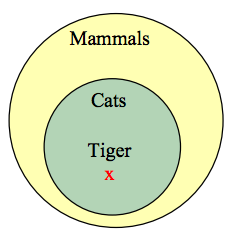 To analyze an argument with a Venn diagram

Conclusion:     Jill is a firefighter 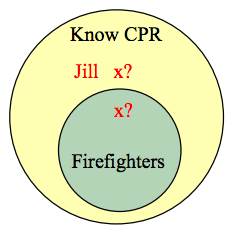 Since the conclusion does not necessarily follow from the premises, this is an invalid argument, regardless of whether Jill actually is a firefighter.


It is important to note that whether or not Jill is actually a firefighter is not important in evaluating the validity of the argument; we are only concerned with whether the premises are enough to prove the conclusion.

Conclusion:     Marcus does not live in Washington 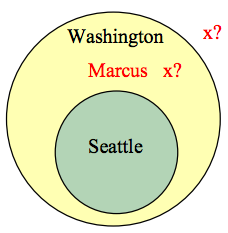 Consider the argument “You are a married man, so you must have a wife.”

This is an invalid argument, since there are, at least in parts of the world, men who are married to other men, so the premise not insufficient to imply the conclusion.

Conclusion:     You went to the store

While this example is hopefully fairly obviously a valid argument, we can analyze it using a truth table by representing each of the premises symbolically. We can then look at the implication that the premises together imply the conclusion. If the truth table is a tautology (always true), then the argument is valid.

To test the validity, we look at whether the combination of both premises implies the conclusion; is it true that [(B→S) ⋀ B] → S ?

To analyze an argument with a truth table:

The premises and conclusion can be stated as:

From the truth table, we can see this is a valid argument.

How Arguments Work - A Guide to Writing and Analyzing Texts in College Chapters 1-5.pdf

Chapter 1_Intro to perspectives in Maths.pptx

Introduction to time series in R