Sculpture is any artwork made by the manipulation of materials resulting in a three-dimensional object. The sculpted figure of the Venus of Berekhat Ram, discovered in the Middle East in 1981, dates to 230,000 years BCE. It is the oldest example of artwork known. The crudely carved stone figure will fit in the palm of your hand. Its name derives from the similarity in form with so-called female fertility figures found throughout Europe, some of which date to 25,000 years ago. For example, the form of the Venus of Willendorf below shows remarkable skill in its carving, including arms draped over exaggerated breasts, an extended abdomen and elaborate patterning on the head, indicating either a braided hairstyle or type of woven cap. Just as remarkable, the figure has no facial detail to indicate identity. The meaning behind these figures is difficult to put into context because of the lack of any written record about them or other supporting materials. 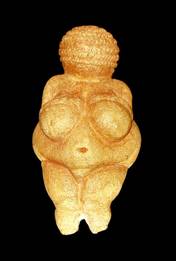 These earliest images are indicative of most of the cultural record in sculpture for thousands of years; singular figurative objects made within an iconographic context of myth, ritual or ceremony. It’s not until the Old Kingdom period of Egyptian sculpture, between 3100 and 2180 BCE, that we start to see sculpture that reflects a resemblance of specific figures.

Sculpture can be freestanding, or self-supported, where the viewer can walk completely around the work to see it from all sides, or created in relief,where the primary form’s surface is raised above the surrounding material, such as the image on a coin. Bas-relief refers to a shallow extension of the image from its surroundings, high relief is where the most prominent elements of the composition are undercut and rendered at more than half in the round against the background. Rich, animated bas-relief sculpture exists at the Banteay Srei temple near Angor Wat, Cambodia. Here humans and mythic figures combine in depictions from ancient Hindu stories. 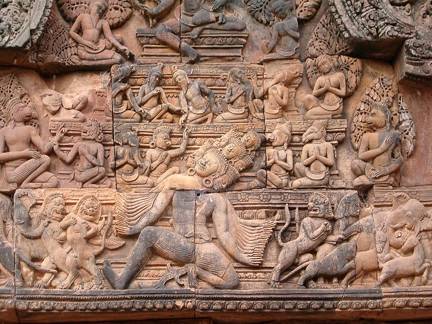 The Shaw Memorial combines freestanding, bas-, and high-relief elements in one masterful sculpture. The work memorializes Colonel Robert Gould Shaw and the Massachusetts Fifty-fourth regiment, the first African American infantry unit to fight for the north in the Civil War.

1. Carving uses the subtractive process to cut away areas from a larger mass, and is the oldest method used for three-dimensional work. Traditionally stone and wood were the most common materials because they were readily available and extremely durable. Contemporary materials include foam, plastics and glass. Using chisels and other sharp tools, artists carve away material until the ultimate form of the work is achieved.

A beautiful example of the carving process is seen in the Water and Moon Bodhisattva from tenth-century China. The Bodhisattva, a Buddhist figure who has attained enlightenment but decides to stay on earth to teach others, is exquisitely carved and painted. The figure is almost eight feet high, seated in an elegant pose on a lotus bloom, relaxed, staring straight ahead with a calm, benevolent look. The extended right arm and raised knee create a stable triangular composition. The sculptor carves the left arm to simulate muscle tension inherent when it supports the weight of the body.

In another example, you can see the high degree of relief carved from an original cedar wood block in the Earthquake Mask from the Pacific Northwest Coast Kwakwaka’ wakw culture. It’s extraordinary for masks to personify a natural event. This and other mythic figure masks are used in ritual and ceremony dances. The broad areas of paint give a heightened sense of character to this mask. 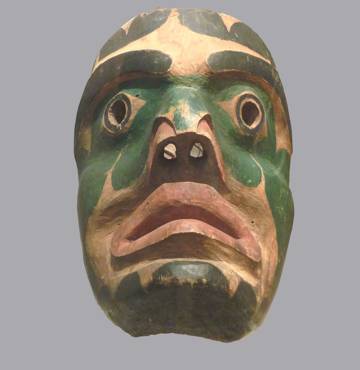 Wood sculptures by contemporary artist Ursula von Rydingsvard are carved, glued and even burned. Many are massive, rough vessel forms that carry the visual evidence of their creation.

Michelangelo’s masterpiece statue of David from 1501 is carved and sanded to an idealized form that the artist releases from the massive block, a testament to human aesthetic brilliance. 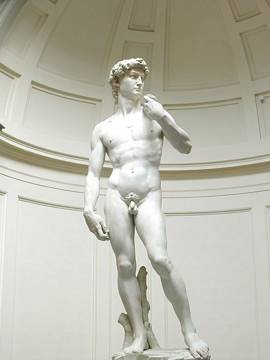 2. Casting has been in use for more than five thousand years and is sometimes termed a replacement or substitution process. It’s a manufacturing process by which a liquid material is usually poured into a mold, which contains a hollow cavity of the desired shape, and then allowed to solidify. One traditional method of bronze casting frequently used today is the lost wax process. A mold is made from an original wax sculpture that is melted away to create a negative cavity into which molten metal is poured. Traditionally, casting materials are usually metals, however, they can also be various cold-setting materials that cure after mixing two or more components together; examples are epoxy, concrete, plaster, and clay. Casting is most often used for making complex shapes that would be otherwise difficult or uneconomical to make by other methods. It’s a labor-intensive process that sometimes allows for the creation of multiples from an original object (similar to the medium of printmaking), each of which is extremely durable and almost exactly like its predecessor. A mold is usually destroyed after the desired number of castings has been made. Traditionally, bronze statues were placed atop pedestals to signify the importance of the figure depicted. A statue of William Seward (below), the U. S. Secretary of State under Abraham Lincoln and who negotiated the purchase of the Alaska territories, is set nearly eight feet high so viewers must look up at him. Standing next to the globe, he holds a roll of plans in his left hand. 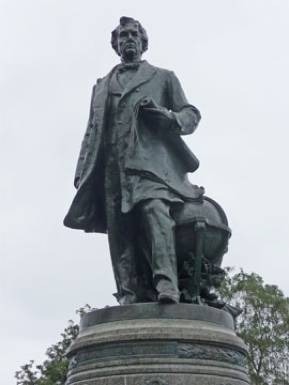 More contemporary bronze cast sculptures reflect their subjects through different cultural perspectives. The statue of rock guitarist Jimi Hendrix is set on the ground, his figure cast as if performing on stage. He’s on both of his knees, head thrown back, eyes shut and mouth open in mid wail. His bell-bottom pants, frilly shirt unbuttoned halfway, necklace and headband give us a snapshot of 1960s rock culture but also engage us with the subject at our level. 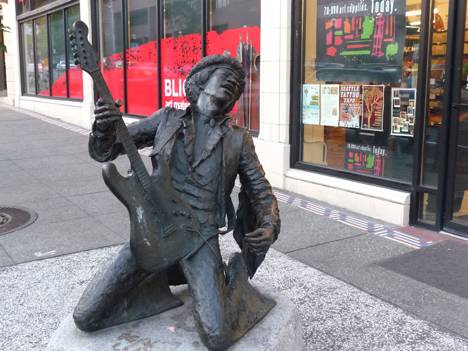 Doris Chase was also a strong sculptor. Her large-scale abstract work Changing Form from 1971 is cast in bronze and dominates the area around it. The title refers to the visual experience you get walking around the work, seeing the positive and negative shapes dissolve and recombine with each other. 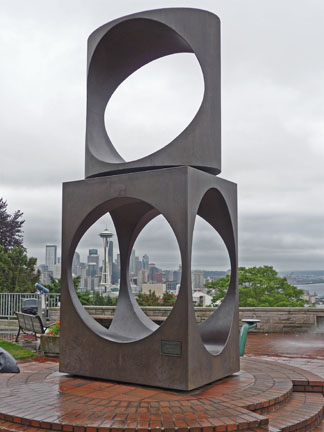 3. Modeling is a method that can be both additive and subtractive. The artist uses modeling to build up form with clay, plaster or other soft material that can be pushed, pulled, pinched or poured into place. The material then hardens into the finished work. Larger sculptures created with this method make use of an armature, an underlying structure of wire that sets the physical shape of the work. Although modeling is primarily an additive process, artists do remove material in the process. Modeling a form is often a preliminary step in the casting method. In 2010, Swiss artist Alberto Giacometti’s Walking Man (c. 1955), a bronze sculpture first modeled in clay, set a record for the highest price ever paid for a work of art at auction.

Louise Nevelson used cut and shaped pieces of wood, gluing and nailing them together to form fantastic, complex compositions. Painted in a single tone, (usually black or white), her sculptures are graphic, textural façades of shapes, patterns, and shadow.

Traditional African masks often combine different materials. The elaborate Kanaga Mask from Mali uses wood, fibers, animal hide and pigment to construct an other worldly visage that changes from human to animal and back again.

Some modern and contemporary sculptures incorporate movement, light and sound. Kinetic sculptures use ambient air currents or motors allowing them to move, changing in form as the viewer stands in place. The artist Alexander Calder is famous for his mobiles, whimsical, abstract works that are intricately balanced to move at the slightest wisp of air, while the sculptures of Jean Tinguely are contraption-like and, similar to Nevelson’s and Butterfield’s works, constructed of scraps often found in garbage dumps. His motorized works exhibit a mechanical aesthetic as they whir, rock and generate noises. Tinguely’s most famous work,  Homage to New York, ran in the sculpture garden at New York’s Museum of Modern Art in 1960 as part of a performance by the artist. After several minutes, the work exploded and caught fire.

The idea of generating sound as part of three-dimensional works has been utilized for hundreds of years, traditionally in musical instruments that carry a spiritual reference. Contemporary artists use sound to heighten the effect of sculpture or to direct recorded narratives. The cast bronze fountain by George Tsutakawa (below) uses water flow to produce a soft rushing sound. In this instance the sculpture also attracts the viewer by the motion of the water: a clear, fluid addition to an otherwise hard abstract surface. 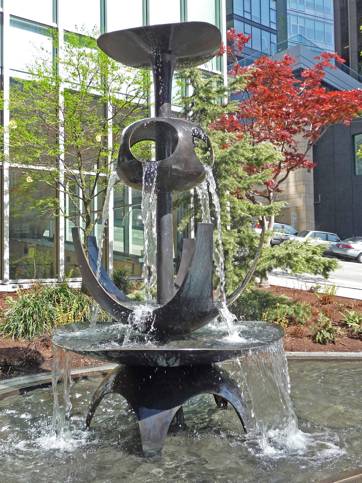 Doug Hollis’s A Sound Garden from 1982 creates sounds from hollow metal tubes atop gridlike structures rising above the ground. In weathervane fashion, the tubes swing into the wind and resonate to specific pitch. The sound extends the aesthetic value of the work to include the sense of hearing and, together with the metal construction, creates a mechanical and psychological basis for the work.

Dan Flavin is one of the first artists to explore the possibilities of light as a sculptural medium. Since the 1960s his work has incorporated fluorescent bulbs of different colors and in various arrangements. Moreover, he takes advantage of the wall space the light is projected onto, literally blurring the line between traditional sculpture and the more complex medium of installation.

Installation art utilizes multiple objects, often from various mediums, and takes up entire spaces. It can be generic or site specific. Because of their relative complexity, installations can address aesthetic and narrative ideas on a larger scale than traditional sculpture. Its genesis can be traced to the Dada movement, ascendant after World War I and which predicated a new aesthetic by its unconventional nature and ridicule of established tastes and styles. Sculpture came off the pedestal and began to transform entire rooms into works or art. Kurt Schwitters’ Merzbau, begun in 1923, transforms his apartment into an abstract, claustrophobic space that is at once part sculpture and architecture. With installation art the viewer is surrounded by and can become part of the work itself.

British artist Rachel Whiteread’s installation Embankment from 2005 fills an entire exhibition hall with casts made from various sized boxes. At first appearance a snowy mountain landscape navigated by the viewer is actually a gigantic nod to the idea of boxes as receptacles of memory towering above and stacked around them, squeezing them towards the center of the room. 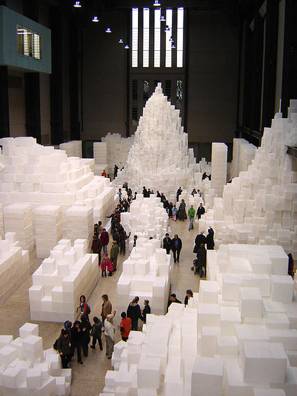 Ilya Kabakov mixes together a narrative of political propaganda, humor and mundane existence in his installation The Man Who Flew into Space from His Apartment from 1984. What we see is the remains of a small apartment plastered with Soviet era posters, a small bed and the makeshift slingshot a man uses to escape the drudgery of his life within the system. A gaping hole in the roof and his shoes on the floor are evidence enough that he made it into space.