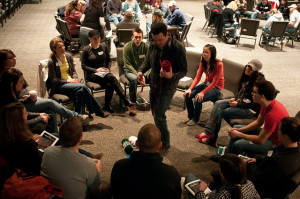 Take a moment to think about the individuals in a particular group you were in and the role each of them played. You may recall that some people were extremely helpful, organized and made getting the job done easy. Others may have been more difficult to work with, or seemed to disrupt the group process. In each case, the participants were performing roles that manifest themselves in most groups. Early studies on group communication provide an overwhelming number of different types of group roles. To simplify, we provide an overview of some of the more common roles. As you study group roles, remember that we usually play more than one role at a time, and that we do not always play the same roles from group to group.

We organize group roles into four categories—task, social-emotional, procedural, and individual. Task roles are those that help or hinder a group’s ability to accomplish its goals. Social-emotional roles are those that focus on building and maintaining relationships among individuals in a group (the focus is on how people feel about being in the group). Procedural roles are concerned with how the group accomplishes its task. People occupying these roles are interested in following directions, proper procedure, and going through appropriate channels when making decisions or initiating policy. The final category, individual roles, includes any role “that detracts from group goals and emphasizes personal goals” (Jensen & Chilberg 97). When people come to a group to promote their individual agenda above the group’s agenda, they do not communicate in ways that are beneficial to the group. Let’s take a look at each of these categories in more detail.

The popular sitcom Workaholics (2011-present) follows three college drop-outs who work in a telemarketing company and are notoriously terrible workers. Always working as a group in their shared cubicle, the three young men are all prime examples of group members who play Individual Roles: Anders as the Aggressor, Blake as the Self-Confessor, Adam as the Blocker, and all three of them as the joker or clown at one point or another. As you might guess, this group is very unproductive and ineffective.


While we certainly do not have the space to cover every role you might encounter in a group, we’re sure you can point to your own examples of people who have filled the roles we’ve discussed. Perhaps you can point to examples of when you have filled some of these roles yourself. Important for group members to understand, are the various roles they play in groups in order to engage in positive actions that help the group along. One dynamic that these roles contribute to in the process of group communication is leadership in groups. Let’s briefly examine how leadership functions in groups.