The other special sense responsive to chemical stimuli is the sense of the smell, or olfaction. The olfactory receptor neurons are incorporated into a limited region of the nasal epithelium in the superior nasal cavity. 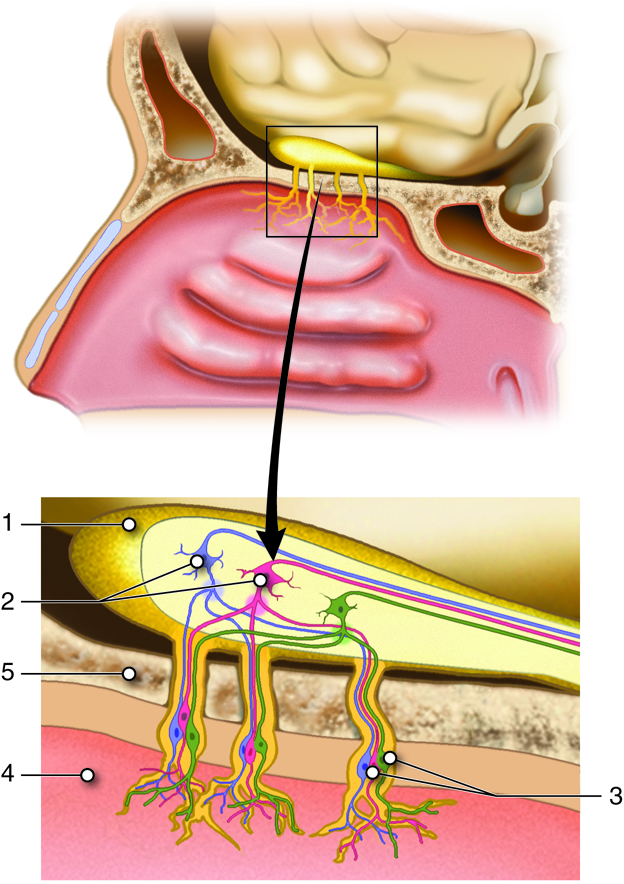 Anatomy of the Structures Involved in Smell (Olfaction). The olfactory bulb (1) contains mitral cells (2) that receive information from the olfactory cells (6). The olfactory cells are found within the nasal epithelium (4) and pass their information through the cribriform plate (3) of the ethmoid bone. This work by Cenveo is licensed under a Creative Commons Attribution 3.0 United States (http://creativecommons.org/licenses/by/3.0/us/).
This region is referred to as the olfactory epithelium and contains bipolar sensory neurons with dendrites extending from the apical surface of the epithelium into the mucus lining the nasal cavity. As airborne molecules are inhaled through the nose, they pass over the olfactory epithelium and dissolve into the mucus. The odorant molecules bind to proteins that keep them dissolved in the mucus and help transport them to the olfactory dendrites. The odorant-protein complex binds to a receptor protein on the membrane of the olfactory cell. The olfactory odorant receptors are G-protein coupled receptors that will cause a transient depolarization in membrane potential that will lead to an action potential if the stimulus is strong enough. 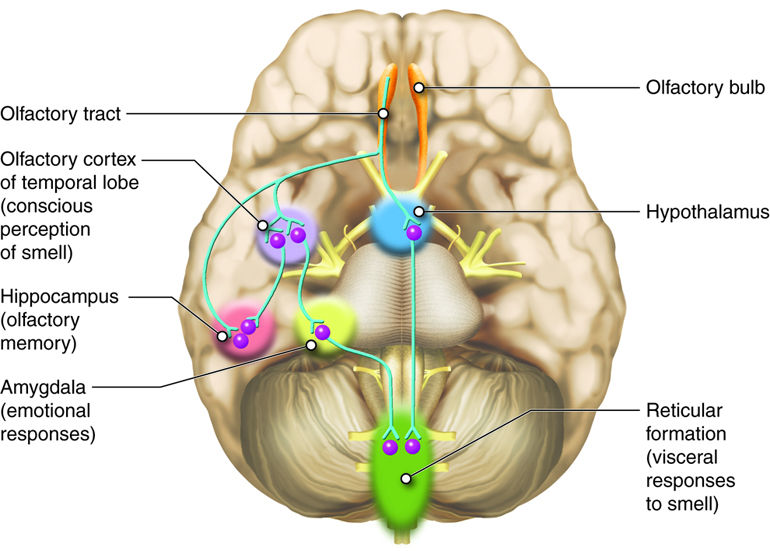 Central Nervous System Regions that Receive Information from the Olfactory Bulb. This work by Cenveo is licensed under a Creative Commons Attribution 3.0 United States (http://creativecommons.org/licenses/by/3.0/us/).
Smell is the one sensory modality that does not require a synaptic connection in the thalamus before connecting to the cerebral cortex. Smell can often be a potent trigger for memories because of this intimate connection of the olfactory system with the cerebral cortex. It can also trigger visceral reflexes through connections within the reticular formation. For example, some people will vomit at the smell of another person’s vomit.

Because of the noxious chemicals that are inhaled into the nasal cavity, these cells need to be replaced on a regular basis. The nasal epithelium, including the olfactory cells, can be harmed by airborne toxic chemicals. To reduce the risk of olfactory neurons being harmed by these toxins, they have a limited lifespan of about 60 days. Because of this imposed cell death, stem cells within the nasal epithelial layer differentiate into new olfactory cells. In doing so, axons of the new neurons have to find their way to the targets in the olfactory bulb. They are able to do this by growing along the axons that are already in place in the cranial nerve. This is the only place in the body where we continually make new neuronal cells.

If any event, such as blunt force trauma of a car accident, leads to the loss of the olfactory nerve, the sense of smell can be lost. This condition is known as anosmia. One way this condition can develop is if the brain moves relative to the ethmoid bone, which is likely to shear (tear) the axons of the olfactory cells. Professional fighters can have anosmia as a result repeated trauma to the head. Certain pharmaceuticals, such as antibiotics, can cause anosmia because they can kill off all the olfactory neurons at once. If no axons are in place within the olfactory nerve, then the axons cannot grow back into the olfactory bulb leaving the person with a long-term loss of smell. There are temporary causes of anosmia, as well, usually based on inflammatory responses in relation to infection or allergy.

You have probably noticed that when you have a cold, the associated loss of smell usually results in food tasting bland. Since taste is comprised of only a small number of sensations, we use the olfactory system to recognize differences between many foods, especially in terms of the spices used. If we lack the numerous smells to enrich the taste experience, we often add extra seasonings to further stimulate the tongue.

The ability of olfactory neurons to be replaced by stem cells can be lost with age leading to age-related anosmia. When this affects an elderly person, they often turn to using increased salt on their food. Unfortunately, increased sodium intake also leads to an increase in blood volume and blood pressure.

MANUAL Lab 10 Anatomy and Physiology of the Special Senses.docx

BIOL A112 •  University of Alaska, Anchorage