Taste, or gustation, is a sense that develops through the interaction of dissolved molecules with taste buds. Currently five sub-modalities (tastes) are recognized, including sweet, salty, bitter, sour, and umami (savory taste or the taste of protein). Umami is the most recent taste sensation described, gaining acceptance in the 1980s. Further research has the potential to discover more sub-modalities in this area, with some scientists suggesting that a taste receptor for fats is likely.

Taste is associated mainly with the tongue, although there are taste (gustatory) receptors on the palate and epiglottis as well. The surface of the tongue, along with the rest of the oral cavity, is lined by a stratified squamous epithelium. In the surface of the tongue are raised bumps, called papilla, that contain the taste buds. There are three types of papilla, based on their appearance: vallate, foliate, and fungiform. 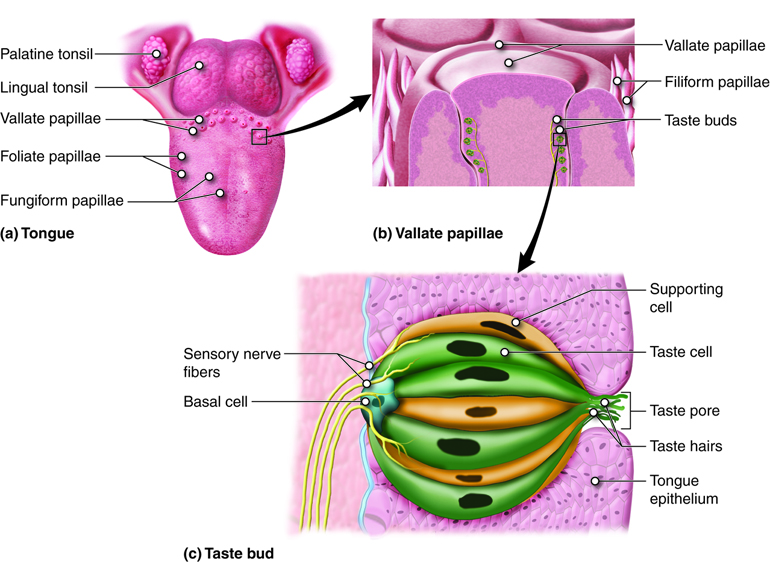 Structures Associated with Taste. The tongue is covered with papillae (a), which contain taste buds (b and c). Within the taste buds are specialized taste cells (d) that respond to chemical stimuli dissolved in the saliva and, in turn, activate sensory nerve fibers in the facial and glossopharyngeal nerves. This work by Cenveo is licensed under a Creative Commons Attribution 3.0 United States (http://creativecommons.org/licenses/by/3.0/us/).
The number of taste buds within papillae varies, with each bud containing several specialized taste cells (gustatory receptor cells) for the transduction of taste stimuli. These receptor cells release neurotransmitters when certain chemicals in ingested substances (such as food) are carried to their surface in saliva. Neurotransmitter from the gustatory cells can activate the sensory neurons in the facial and glossopharyngeal cranial nerves.

As previously mentioned, five different taste sensations are currently recognized. The first, salty, is simply the sense of Na+ concentration in the saliva. As the Na+ concentration becomes high outside the taste cells, a strong concentration gradient drives their diffusion into the cells. This depolarizes the cells, leading them to release neurotransmitter.

The sour taste is transduced similar to that of salty, except that it is a response to the H+ concentration released from acidic substances (those with low pH), instead of a response to Na+. For example, orange juice, which contains citric acid, will taste sour because it has a pH value of about 3. Of course, it is often sweetened so that the sour taste is masked. As the concentration of the hydrogen ions increases because of ingesting acidic compounds, the depolarization of specific taste cells increases.

The other three tastes; sweet, bitter and umami are transduced through G-protein coupled cell surface receptors instead of the direct diffusion of ions like we discussed with salty and sour. The sweet taste is the sensitivity of taste cells to the presence of glucose dissolved in the saliva. Molecules that are similar in structure to glucose will have a similar effect on the sensation of sweetness. Other monosaccharides such as fructose or artificial sweeteners like aspartame (Nutrasweet™), saccharine, or sucralose (Splenda™) will activate the sweet receptors as well. The affinity for each of these molecules varies, and some will taste “sweeter” than glucose because they bind to the G-protein coupled receptor differently.

The bitter taste can be stimulated by a large number of molecules collectively known as alkaloids. Alkaloids are essentially the opposite of acids, they contain basic (in the sense of pH) nitrogen atoms within their structures. Most alkaloids originate from plant sources, with common examples being hops (in beer), tannins (in wine), tea, aspirin, and similar molecules. Coffee contains alkaloids and is slightly acidic, with the alkaloids contributing the bitter taste to coffee. When enough alkaloids are contained in a substance it can stimulate the gag reflex. This is a protective mechanism because alkaloids are often produced by plants as a toxin to deter infectious microorganisms and plant eating animals. Such molecules may be toxic to animals as well, so we tend to avoid eating bitter foods. When we do eat bitter foods, they are often combined with a sweet component to make them more palatable (cream and sugar in coffee, for example).

The taste known as umami is often referred to as the savory taste. The name was created by the Japanese researcher who originally described it. Like sweet and bitter, it is based on the activation of G-protein coupled receptors, in this case by amino acids, especially glutamine. Thus, umami might be considered the taste of proteins, and is most associated with meat containing dishes.

Axons from the three cranial nerves carrying taste information travel to the medulla. From there much of the information is carried to the thalamus and then routed to the primary gustatory cortex, located near the inferior margin of the post-central gyrus. It is the primary gustatory cortex that is responsible for our sensations of taste. And, although this region receives significant input from taste buds, it is likely that it also receives information about the smell and texture of food, all contributing to our overall taste experience. The nuclei in the medulla also send projections to the hypothalamus and amygdalae, which are involved in autonomic reflexes such as gagging and salivation.

MANUAL Lab 10 Anatomy and Physiology of the Special Senses.docx

BIOL A112 •  University of Alaska, Anchorage

Anatomy and Physiology I - Syllabus Lab.pdf

3.1_ Vision and the Eye_ Essential Human Anatomy and Physiology II with Lab- Burtt.pdf