Clothiers who target teens and young adults (such as Gap and Abercrombie & Fitch) must estimate the size of both current and future audiences. So must companies that specialize in products aimed at customers in other age brackets—say, young children or retirees. Marketers pay particular attention to population shifts because they can have dramatic effects on a consumer base, either increasing or decreasing the number of potential customers. Marketers tend to assign most Americans born in the last sixty years to one of three groups: the baby-boom generation (those born between 1946 and 1964), Generation X (1965 to 1975), and Generation Y—also known as “echo baby boomers” or “millennials” (1976 to 2001). In addition to age, members of each group tend to share common experiences, values, and attitudes that stay with them as they mature. These values and attitudes have a profound effect on both the products they want and the marketing efforts designed to sell products to them. Let’s look a little more closely at some of the defining characteristics of each group.

The huge wave of baby boomers began arriving in 1946, following World War II, and marketers have been catering to them ever since. What are they like? Sociologists have attributed to them such characteristics as “individuality, tolerance, and self-absorption.” There are seventy million of them, and as they marched through life over the course of five decades, marketers crowded the roadside to supply them with toys, clothes, cars, homes, and appliances—whatever they needed at the time. They’re still a major marketing force, but their needs have changed: they’re now the target market for Botox, pharmaceutical products, knee surgery, financial investments, cruises, vacation homes, and retirement communities.

Because birth rates had declined by the time the “Gen X” babies first arrived in 1965, this group had just one decade to grow its numbers. Thus, it’s considerably smaller (seventeen million) than the baby-boomer group, and it has also borne the brunt of rising divorce rates and the arrival of AIDS. Experts say, however, that they’re diverse, savvy, and pragmatic and point out that even though they were once thought of as “slackers,” they actually tend to be self-reliant and successful. At this point in their lives, most are at their peak earning power and affluent enough to make marketers stand up and take notice.

When they became parents, baby boomers delivered a group to rival their own. Born between 1976 and 2001, their sixty million children are sometimes called “echo boomers” (because their population boom is a reverberation of the baby boom). They’re still evolving, but they’ve already been assigned some attributes: they’re committed to integrity and honesty, they're family oriented and close to parents, ethnically diverse and accepting of differences, upbeat and optimistic about the future (although the troubled economy is lessening their optimism), education focused, independent, and goal oriented. They also seem to be coping fairly well: among today’s teens, arrests, drug use, drunk driving, and school dropout rates are all down. Generation Ys are being courted by carmakers. Global car manufacturers have launched a number of 2012 cars designed to cater to the members of Generation Y. Advertisers are also busy trying to find innovative ways to reach this group, but they’re finding that it’s not easy. Generation Ys grew up with computers and other modes of high technology, and they’re used to doing several things at once—simultaneously watching TV, texting, and playing games on the computer. As a result, they’re quite adept at tuning out ads. Try to reach them through TV ads and they’ll channel-surf right past them or hit their TiVo remotes. You can’t get to them over the Internet because they know all about pop-up blockers. In one desperate attempt to get their attention, an advertiser paid college students fifty cents to view thirty-second ads on their computers. Advertisers keep trying, because Generation Y is big enough to wreck a brand by giving it a cold shoulder.

Why did you buy an Apple computer when your friend bought a Dell PC? What information did you collect before making the decision? What factors did you consider when evaluating alternatives? How did you make your final choice? Were you happy with your decision? To design effective strategies, marketers need to find the answers that consumers give to questions such as these. In other words, they try to improve their understanding of consumer behavior—the decision process that individuals go through when purchasing or using products. Later we’ll look at the process that buyers go through in choosing one product over another. Then, we’ll explore some factors that influence consumers’ behavior.

Generally speaking, buyers run through a series of steps in deciding whether to purchase a particular product. Some purchases are made without much thought. You probably don’t think much, for example, about the brand of gasoline you put in your car; you just stop at the most convenient place. Other purchases, however, require considerable thought. For example, you probably spent a lot of time deciding which college to attend. Let’s revisit that decision as a means of examining the five steps that are involved in the consumer buying process and that are summarized in Figure 2, "The Buying Process": need recognition, information search, evaluation, purchase, and postpurchase evaluation. 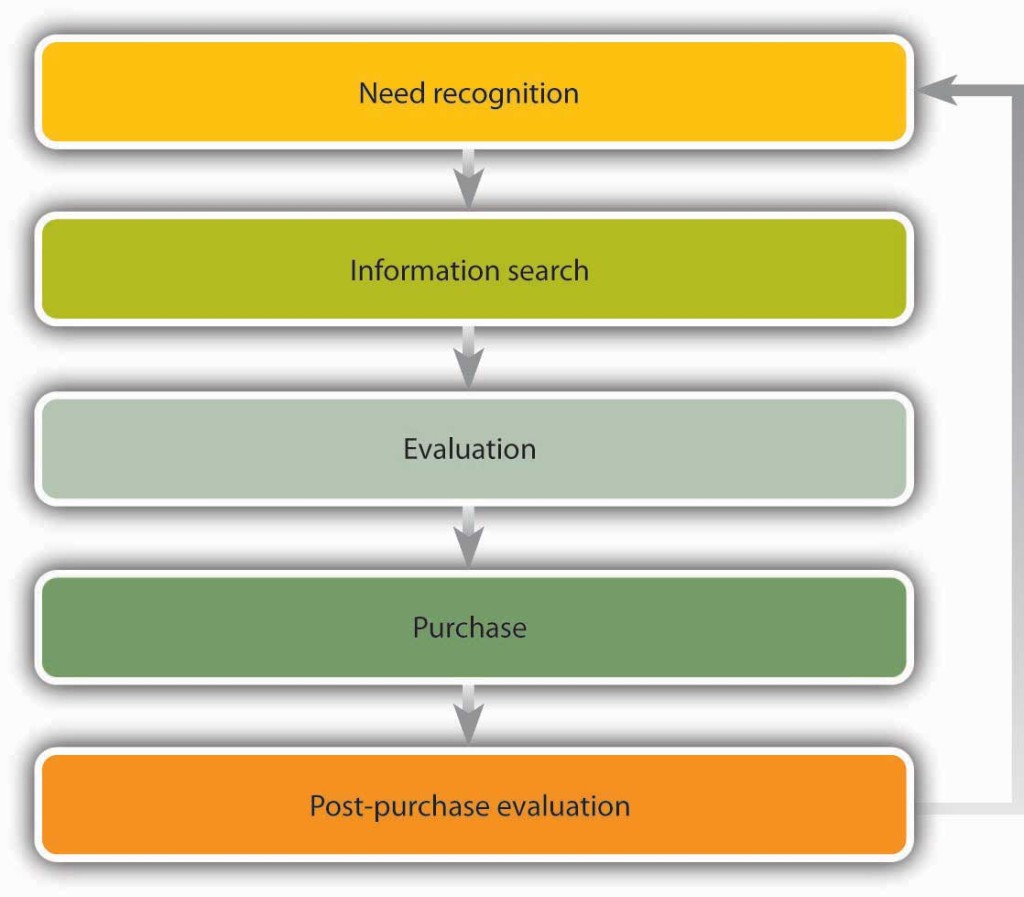 
Understanding the buying process of potential students is crucial to college administrators in developing marketing strategies to attract qualified “buyers.” They’d certainly like to know what information you found useful, which factors most influenced your decision, and how you made your final choice. They’ll also want to know whether you’re happy with your choice. This is the kind of information that colleges are seeking when they solicit feedback, both from students who chose their schools and from those who didn’t.

Did you ever buy something you knew you shouldn’t buy but just couldn’t help yourself—something you simply wanted? Maybe it was a spring-break trip to the Bahamas that you really couldn’t afford. Objectively, you may have made a bad decision, but not all decisions are made on a purely objective basis. Psychological and social influences come into play. Let’s take a closer look at each of these factors.

Under this category, we can identify at least the following five variables:

It shouldn’t be surprising that marketers are keenly interested in the effect of all these influences on your buying decisions. For instance, suppose the travel agency that sold you your spring-break getaway found that you bought the package because you viewed it as a reward for studying hard and doing well academically. In that case, it might promote student summer-travel programs as rewards for a hard year’s work at school.

The Effects of Ecommerce on Consumer Behavior (1).pptx

Guerilla Marketing and its effects on Consumer Behavior in the Retail Industry of Pakistan.docx

Effects of pandemics on consumer behavior.edited.docx

Effects of social media use on Consumer behaviors by Organizations.edited (1).docx

An introduction to consumer behavior questions.docx

Deceptive Advertisement and Its Effects on Consumer Behavior.docx

The Impact of Digital Marketing on Consumer Behavior.docx

Understanding the COVID-19 Effects of E-Commerce on Consumer Behavior in Ormoc City.pdf

Effects of culture on consumer behavior.docx

A study on the effects of advertisement on consumer buying behavior.docx

INFLUENCE OF DEMOGRAPHIC FACTORS ON THE ETHICALITY OF CONSUMER BEHAVIOR.docx

SESSION 1 Buying, Having and being An introduction to consumer behavior.docx