In eukaryotic cells, the pyruvate molecules produced at the end of glycolysis are transported into mitochondria, which are sites of cellular respiration. If oxygen is available, aerobic respiration will go forward. In mitochondria, pyruvate will be transformed into a two-carbon acetyl group (by removing a molecule of carbon dioxide) that will be picked up by a carrier compound called coenzyme A (CoA), which is made from vitamin B5. The resulting compound is called acetyl CoA. (Figure 1). Acetyl CoA can be used in a variety of ways by the cell, but its major function is to deliver the acetyl group derived from pyruvate to the next pathway in glucose catabolism.

Figure 1. Pyruvate is converted into acetyl-CoA before entering the citric acid cycle.

Like the conversion of pyruvate to acetyl CoA, the citric acid cycle in eukaryotic cells takes place in the matrix of the mitochondria. Unlike glycolysis, the citric acid cycle is a closed loop: The last part of the pathway regenerates the compound used in the first step. The eight steps of the cycle are a series of chemical reactions that produces two carbon dioxide molecules, one ATP molecule (or an equivalent), and reduced forms (NADH and FADH2) of NAD+ and FAD+, important coenzymes in the cell. Part of this is considered an aerobic pathway (oxygen-requiring) because the NADH and FADH2 produced must transfer their electrons to the next pathway in the system, which will use oxygen. If oxygen is not present, this transfer does not occur.

Two carbon atoms come into the citric acid cycle from each acetyl group. Two carbon dioxide molecules are released on each turn of the cycle; however, these do not contain the same carbon atoms contributed by the acetyl group on that turn of the pathway. The two acetyl-carbon atoms will eventually be released on later turns of the cycle; in this way, all six carbon atoms from the original glucose molecule will be eventually released as carbon dioxide. It takes two turns of the cycle to process the equivalent of one glucose molecule. Each turn of the cycle forms three high-energy NADH molecules and one high-energy FADH2 molecule. These high-energy carriers will connect with the last portion of aerobic respiration to produce ATP molecules. One ATP (or an equivalent) is also made in each cycle. Several of the intermediate compounds in the citric acid cycle can be used in synthesizing non-essential amino acids; therefore, the cycle is both anabolic and catabolic.

You have just read about two pathways in glucose catabolism—glycolysis and the citric acid cycle—that generate ATP. Most of the ATP generated during the aerobic catabolism of glucose, however, is not generated directly from these pathways. Rather, it derives from a process that begins with passing electrons through a series of chemical reactions to a final electron acceptor, oxygen. These reactions take place in specialized protein complexes located in the inner membrane of the mitochondria of eukaryotic organisms and on the inner part of the cell membrane of prokaryotic organisms. The energy of the electrons is harvested and used to generate a electrochemical gradient across the inner mitochondrial membrane. The potential energy of this gradient is used to generate ATP. The entirety of this process is called oxidative phosphorylation.

The electron transport chain (Figure 2a) is the last component of aerobic respiration and is the only part of metabolism that uses atmospheric oxygen. Oxygen continuously diffuses into plants for this purpose. In animals, oxygen enters the body through the respiratory system. Electron transport is a series of chemical reactions that resembles a bucket brigade in that electrons are passed rapidly from one component to the next, to the endpoint of the chain where oxygen is the final electron acceptor and water is produced. There are four complexes composed of proteins, labeled I through IV in Figure 2c, and the aggregation of these four complexes, together with associated mobile, accessory electron carriers, is called the electron transport chain. The electron transport chain is present in multiple copies in the inner mitochondrial membrane of eukaryotes and in the plasma membrane of prokaryotes. In each transfer of an electron through the electron transport chain, the electron loses energy, but with some transfers, the energy is stored as potential energy by using it to pump hydrogen ions across the inner mitochondrial membrane into the intermembrane space, creating an electrochemical gradient. 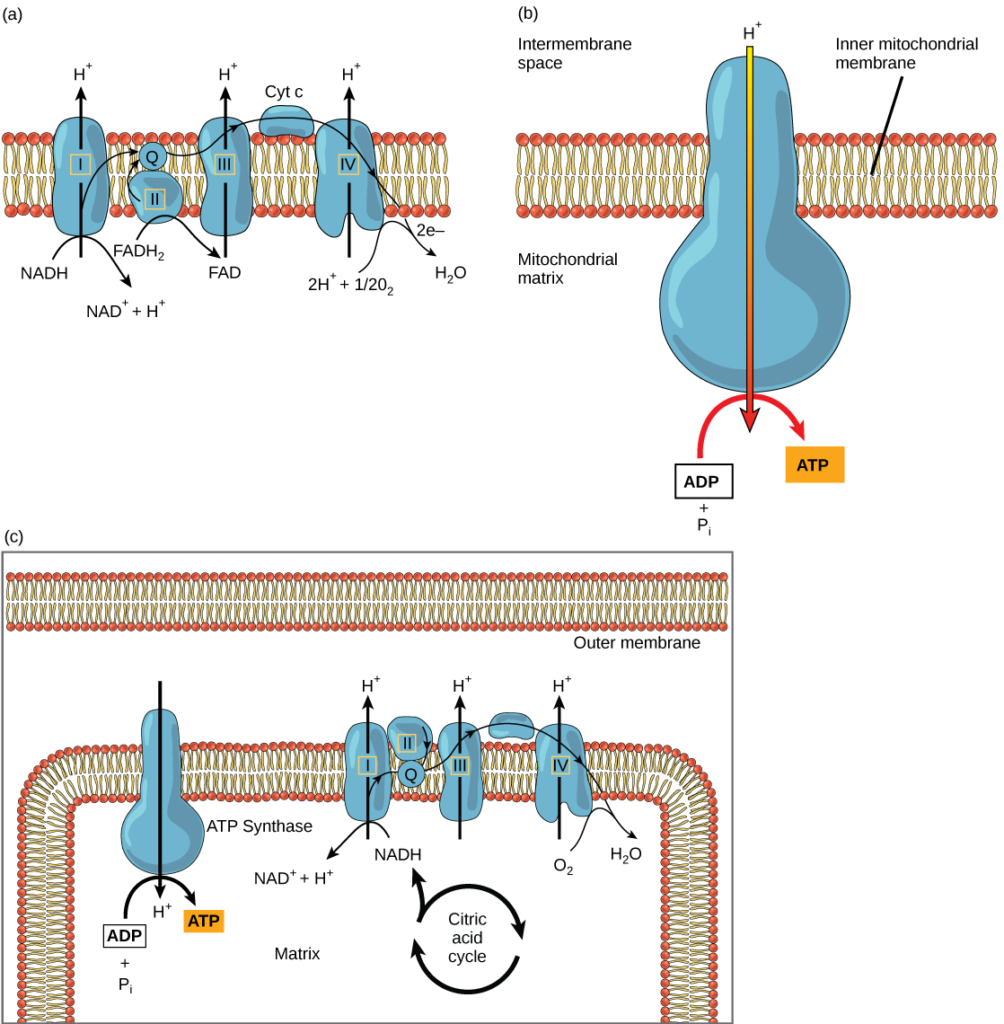 Figure 2. (a) The electron transport chain is a set of molecules that supports a series of oxidation-reduction reactions. (b) ATP synthase is a complex, molecular machine that uses an H+ gradient to regenerate ATP from ADP. (c) Chemiosmosis relies on the potential energy provided by the H+ gradient across the membrane.

Cyanide inhibits cytochrome c oxidase, a component of the electron transport chain. If cyanide poisoning occurs, would you expect the pH of the intermembrane space to increase or decrease? What affect would cyanide have on ATP synthesis?

Electrons from NADH and FADH2 are passed to protein complexes in the electron transport chain. As they are passed from one complex to another (there are a total of four), the electrons lose energy, and some of that energy is used to pump hydrogen ions from the mitochondrial matrix into the intermembrane space. In the fourth protein complex, the electrons are accepted by oxygen, the terminal acceptor. The oxygen with its extra electrons then combines with two hydrogen ions, further enhancing the electrochemical gradient, to form water. If there were no oxygen present in the mitochondrion, the electrons could not be removed from the system, and the entire electron transport chain would back up and stop. The mitochondria would be unable to generate new ATP in this way, and the cell would ultimately die from lack of energy. This is the reason we must breathe to draw in new oxygen.

Chemiosmosis (Figure 2c) is used to generate 90 percent of the ATP made during aerobic glucose catabolism. The result of the reactions is the production of ATP from the energy of the electrons removed from hydrogen atoms. These atoms were originally part of a glucose molecule. At the end of the electron transport system, the electrons are used to reduce an oxygen molecule to oxygen ions. The extra electrons on the oxygen ions attract hydrogen ions (protons) from the surrounding medium, and water is formed. The electron transport chain and the production of ATP through chemiosmosis are collectively called oxidative phosphorylation.

The number of ATP molecules generated from the catabolism of glucose varies. For example, the number of hydrogen ions that the electron transport chain complexes can pump through the membrane varies between species. Another source of variance stems from the shuttle of electrons across the mitochondrial membrane. The NADH generated from glycolysis cannot easily enter mitochondria. Thus, electrons are picked up on the inside of the mitochondria by either NAD+ or FAD+. Fewer ATP molecules are generated when FAD+ acts as a carrier. NAD+ is used as the electron transporter in the liver and FAD+ in the brain, so ATP yield depends on the tissue being considered.

Another factor that affects the yield of ATP molecules generated from glucose is that intermediate compounds in these pathways are used for other purposes. Glucose catabolism connects with the pathways that build or break down all other biochemical compounds in cells, and the result is somewhat messier than the ideal situations described thus far. For example, sugars other than glucose are fed into the glycolytic pathway for energy extraction. Other molecules that would otherwise be used to harvest energy in glycolysis or the citric acid cycle may be removed to form nucleic acids, amino acids, lipids, or other compounds. Overall, in living systems, these pathways of glucose catabolism extract about 34 percent of the energy contained in glucose.

What happens when the critical reactions of cellular respiration do not proceed correctly? Mitochondrial diseases are genetic disorders of metabolism. Mitochondrial disorders can arise from mutations in nuclear or mitochondrial DNA, and they result in the production of less energy than is normal in body cells. Symptoms of mitochondrial diseases can include muscle weakness, lack of coordination, stroke-like episodes, and loss of vision and hearing. Most affected people are diagnosed in childhood, although there are some adult-onset diseases. Identifying and treating mitochondrial disorders is a specialized medical field. The educational preparation for this profession requires a college education, followed by medical school with a specialization in medical genetics. Medical geneticists can be board certified by the American Board of Medical Genetics and go on to become associated with professional organizations devoted to the study of mitochondrial disease, such as the Mitochondrial Medicine Society and the Society for Inherited Metabolic Disease.

The citric acid cycle is a series of chemical reactions that removes high-energy electrons and uses them in the electron transport chain to generate ATP. One molecule of ATP (or an equivalent) is produced per each turn of the cycle.

The electron transport chain is the portion of aerobic respiration that uses free oxygen as the final electron acceptor for electrons removed from the intermediate compounds in glucose catabolism. The electrons are passed through a series of chemical reactions, with a small amount of free energy used at three points to transport hydrogen ions across the membrane. This contributes to the gradient used in chemiosmosis. As the electrons are passed from NADH or FADH2 down the electron transport chain, they lose energy. The products of the electron transport chain are water and ATP. A number of intermediate compounds can be diverted into the anabolism of other biochemical molecules, such as nucleic acids, non-essential amino acids, sugars, and lipids. These same molecules, except nucleic acids, can serve as energy sources for the glucose pathway.

1. Cyanide inhibits cytochrome c oxidase, a component of the electron transport chain. If cyanide poisoning occurs, would you expect the pH of the intermembrane space to increase or decrease? What affect would cyanide have on ATP synthesis?

2. The oxygen we inhale is the final electron acceptor in the electron transport chain and allows aerobic respiration to proceed, which is the most efficient pathway for harvesting energy in the form of ATP from food molecules. The carbon dioxide we breathe out is formed during the citric acid cycle when the bonds in carbon compounds are broken.

acetyl CoA: the combination of an acetyl group derived from pyruvic acid and coenzyme A which is made from pantothenic acid (a B-group vitamin)

ATP synthase: a membrane-embedded protein complex that regenerates ATP from ADP with energy from protons diffusing through it

chemiosmosis: the movement of hydrogen ions down their electrochemical gradient across a membrane through ATP synthase to generate ATP

citric acid cycle: a series of enzyme-catalyzed chemical reactions of central importance in all living cells that harvests the energy in carbon-carbon bonds of sugar molecules to generate ATP; the citric acid cycle is an aerobic metabolic pathway because it requires oxygen in later reactions to proceed

electron transport chain: a series of four large, multi-protein complexes embedded in the inner mitochondrial membrane that accepts electrons from donor compounds and harvests energy from a series of chemical reactions to generate a hydrogen ion gradient across the membrane

oxidative phosphorylation: the production of ATP by the transfer of electrons down the electron transport chain to create a proton gradient that is used by ATP synthase to add phosphate groups to ADP molecules

FINANCE 3425 •  The British University in Egypt

BIOC 300B •  University of Victoria

7.3 Oxidation of Pyruvate and The Citric Acid Cycle.docx

Oxidation of Pyruvate and the Citric Acid Cycle.docx