Graphs of Exponential and Logarithmic Functions

The exponential function
y=bx
where
b>0
is a function that will remain proportional to its original value when it grows or decays.

Describe the properties of graphs of exponential functions

When
b>1
the function grows in a manner that is proportional to its original value. This is called exponential growth.

When
0>b>1
the function decays in a manner that is proportional to its original value. This is called exponential decay.

Let us consider the function
y=2x
when
b>1​
. One way to graph this function is to choose values for
x
and substitute these into the equation to generate values for
y
. Doing so we may obtain the following points:

As you connect the points, you will notice a smooth curve that crosses the
y
-axis at the point
(0,1)
and is increasing as
x
takes on larger and larger values. That is, the curve approaches infinity as
x
approaches infinity. As
x
takes on smaller and smaller values the curve gets closer and closer to the
x
-axis. That is, the curve approaches zero as
x
approaches negative infinity making the
x
-axis is a horizontal asymptote of the function. The point
(1,b)
is on the graph. This is true of the graph of all exponential functions of the form
y=bx
for
x>1
. 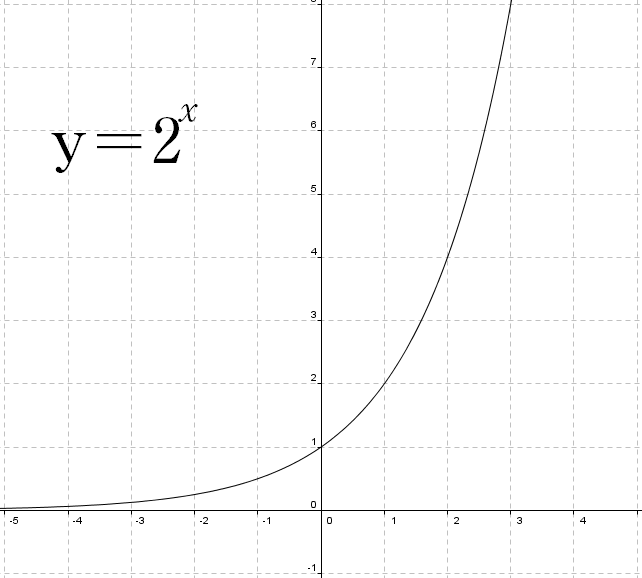 Graph of
y=2x
: The graph of this function crosses the
y
-axis at
(0,1)
and increases as
x
approaches infinity. The
x
-axis is a horizontal asymptote of the function.

Let us consider the function
y=21​x
when
0<b<1
. One way to graph this function is to choose values for
x
and substitute these into the equation to generate values for
y
. Doing so you can obtain the following points:

As you connect the points you will notice a smooth curve that crosses the y-axis at the point
(0,1)
and is decreasing as
x
takes on larger and larger values. The curve approaches infinity zero as approaches infinity. As
x
takes on smaller and smaller values the curve gets closer and closer to the
x
-axis. That is, the curve approaches zero as
x
approaches negative infinity making the
x
-axis a horizontal asymptote of the function. The point
(1,b)
is on the graph. This is true of the graph of all exponential functions of the form
y=bx
for
0<x<1
.

As you can see in the graph below, the graph of
y=21​x
is symmetric to that of
y=2x
over the
y
-axis. That is, if the plane were folded over the
y
-axis, the two curves would lie on each other. 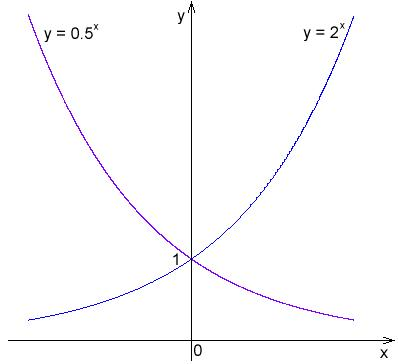 Graph of
y=2x
and
y=21​x
: The graphs of these functions are symmetric over the
y
-axis.

Why Must
b
Be a Positive Number?

If
b=1
, then the function becomes
y=1x
. As
1
to any power yields
1
, the function is equivalent to
y=1
which is a horizontal line, not an exponential equation.

The point
(0,1)
is always on the graph of an exponential function of the form
y=bx
because
b
is positive and any positive number to the zero power yields
1
.

The point
(1,b)
is always on the graph of an exponential function of the form
y=bx
because any positive number
b
raised to the first power yields
1
.

The function
y=bx
has the
x
-axis as a horizontal asymptote because the curve will always approach the
x
-axis as
x
approaches either positive or negative infinity, but will never cross the axis as it will never be equal to zero.

Logarithmic functions can be graphed manually or electronically with points generally determined via a calculator or table.

Describe the properties of graphs of logarithmic functions


Below are graphs of logarithmic functions with bases 2,
e
, and 10. 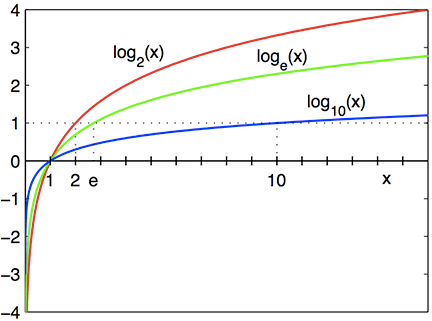 Logarithmic Graphs: After
x=1
, where the graphs cross the
x
-axis,
log2​(x)
in red is above
loge​(x)
in green, which is above
log10​(x)
in blue. Before this point, the order is reversed. All three logarithms have the
y
-axis as a vertical asymptote, and are always increasing.
All three logarithmic graphs begin with a steep climb after
x=0
, but stretch more and more horizontally, their slope ever-decreasing as
x
increases. All of them cross the
x
-axis at
x=1
.

Properties of the Graphs of Logarithmic Functions

Thus, we are looking for an exponent
y
such that
by=1
. As
b>0
, the exponent we seek is
1
irrespective of the value of
b
. This means the point
(x,y)=(1,0)
will always be on a logarithmic function of this type.

The
y
-axis is a vertical asymptote of the graph. This means that the curve gets closer and closer to the
y
-axis but does not cross it.

Let us consider what happens as the value of
x
approaches zero from the right for the equation whose graph appears above. Namely,
y=logb​x
. We can do this by choosing values for
x
, plugging them into the equation and generating values for
y
.

Let us assume that
b
is a positive number greater than
1
, and let us investigate values of
x
between
0
and
1
. Under these conditions, if we let
x=b1​
, the equation becomes
y=logb1​
.

Thus, we are looking for an exponent such that
b
raised to that exponent yields
b1​
. The exponent we seek is
−1
and the  point
(b1​,−1)
is on the graph. Similarly, we can obtain the following points that are also on the graph:

As can be seen the closer the value of
x
gets to
0
, the more and more negative the graph becomes. That is, as
x
approaches zero the graph approaches negative infinity. This means that the
y
-axis is a vertical asymptote of the function.

If the
x
-value were zero, the function would read
y=logb​0
.

Here we are looking for an exponent such that
b
raised to that exponent is
0
. Since
b
is a positive number, there is no exponent that we can raise
b
to so as to obtain
0
. In fact, since
b
is positive, raising it to a power will always yield a positive number.

The range of the function is all real numbers. That is, the graph can take on any real number.

At first glance, the graph of the logarithmic function can easily be mistaken for that of the square root function.

Graphing logarithmic functions can be done by locating points on the curve either manually or with a calculator.

When graphing without a calculator, we use the fact that the inverse of a logarithmic function is an exponential function.

Logarithmic functions can be graphed by hand without the use of a calculator if we use the fact that they are inverses of exponential functions.

Let us again consider the graph of the following function:

This can be written in exponential form as:

Now let us consider the inverse of this function. To do so, we interchange
x
and
y
:

The exponential function
3x=y
is one we can easily generate points for. If we take some values for
x
and plug them into the equation to find the corresponding values for
y
we can obtain the following points:

We plot and connect these points to obtain the graph of the function
y=log3​x
below. 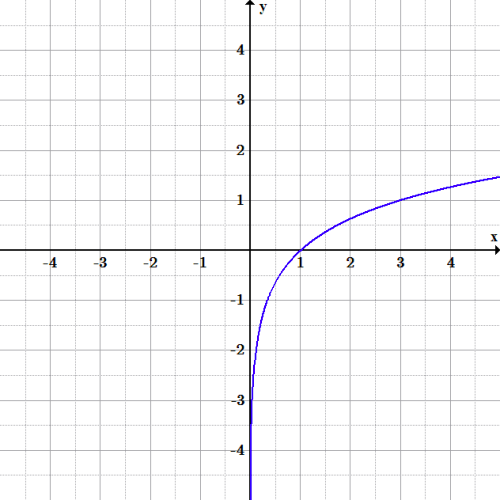 Graphing Logarithmic Functions With Bases Between
0
and
1 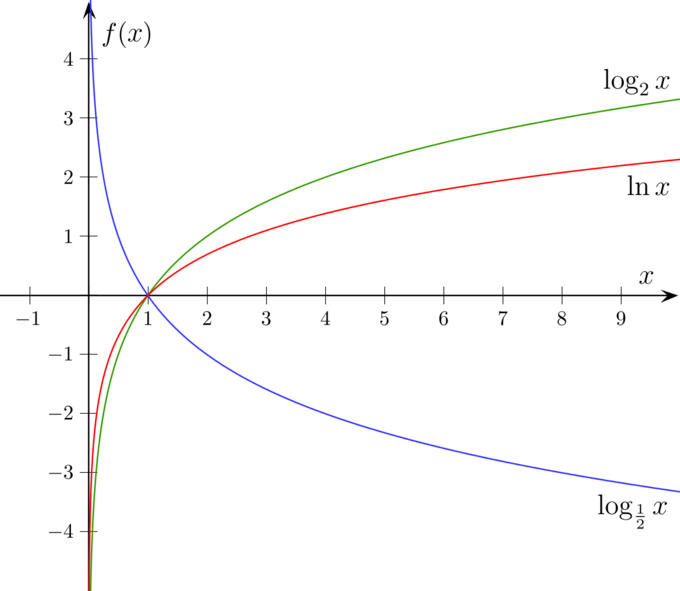 Some functions with rapidly changing shape are best plotted on a scale that increases exponentially, such as a logarithmic graph.

Why Use a Logarithmic Scale?

Consider, as an example, the Stefan-Boltzmann law, which relates the power (j*) emitted by a black body to temperature (T).

On a standard graph, this equation can be quite unwieldy. The fourth-degree dependence on temperature means that power increases extremely quickly. The fact that the rate is ever-increasing (and steeply so) means that changing scale (scaling the axes by
5
,
10
or even
100
) is of little help in making the graph easier to interpret.

The top left is a linear scale. The bottom right is a logarithmic scale. The top right and bottom left are called semi-log scales because one axis is scaled linearly while the other is scaled using logarithms.

Logarithmic scale: The graphs of functions
f(x)=10x,f(x)=x
and
f(x)=logx
on four different coordinate plots. Top Left is a linear scale, top right and bottom left are semi-log scales and bottom right is a logarithmic scale.

As you can see, when both axis used a logarithmic scale (bottom right) the graph retained the properties of the original graph (top left) where both axis were scaled using a linear scale. That means that if we want to graph a function that is unwieldy on a linear scale we can use a logarithmic scale on each axis and retain the properties of the graph while at the same time making it easier to graph.

The primary difference between the logarithmic and linear scales is that, while the difference in value between linear points of equal distance remains constant (that is, if the space from
0
to
1
on the scale is
1
cm on the page, the distance from
1
to
2
,
2
to
3
, etc., will be the same), the difference in value between points on a logarithmic scale will change exponentially. A logarithmic scale will start at a certain power of
10
, and with every unit will increase by a power of
10
.

Thus, if one wanted to convert a linear scale (with values
0−5
to a logarithmic scale, one option would be to replace
1,2,3,4
and 5 with
0.001,0.01,0.1,1,10
and
100
, respectively. Between each major value on the logarithmic scale, the hashmarks become increasingly closer together with increasing value. For example, in the space between
1
and
10
, the
8
and
9
are much closer together than the
2
and
3
.

A key point about using logarithmic graphs to solve problems is that they expand scales to the point at which large ranges of data make more sense. In the equation mentioned above (
j∗=σT4
), plotting
j
vs.
T
would generate the expected curve, but the scale would be such that minute changes go unnoticed and the large scale effects of the relationship dominate the graph: It is so big that the "interesting areas" won't fit on the paper on a readable scale.

Taking the logarithm of each side of the equations yields:
logj=log(στ)4
. We now rely on the properties of logarithms to re-write the equation.

Recall the following properties of logarithms:

Using the above, our equation becomes: