Functions and Their Notation

A function maps a set of inputs onto a set of permissible outputs. Each input corresponds with one and only one output

In mathematics, a function is a relation between a set of inputs and a set of permissible outputs. Functions have the property that each input is related to exactly one output. For example, in the function
f(x)=x2
any input for
x
will give one output only.

Functions are typically named with a single letter, like
f
.
f(x)
is read "
f
of
x
", and represents the output of the function
f
corresponding to an input
x
.

The input variable (s) are sometimes referred to as the argument(s) of the function. Consider the following example:

In the case of a function with just one input variable, the input and output of the function can be expressed as an ordered pair. The order is such that the first element is the argument and the second is the output. In the example above,
f(x)=x2
, we have the ordered pair
(−3,9)
. If both the input and output are real numbers then the ordered pair can be viewed as the Cartesian coordinates of a point on the graph of the function.

Another commonly used notation for a function is
f:X→Y
, which reads as saying that
f
is a function that maps values from the set
X
onto values of the set
Y
.

Functions as a Machine

Functions are often described as a machine in a box that is open on two ends. You put something into one end of the box, it gets changed inside of the box, and then the result pops out the other end. The function is the machine inside the box and it's defined by what it does to whatever you put into it.

Function Machine: A function
f
takes an input
x
and returns an output
f(x)
. One metaphor describes the function as a "machine", that for each input returns a corresponding output.

Fruit Halving Function: This shows a function that takes a fruit as input and releases half the fruit as output.

Functions As a Relation

Functions can also be thought of as a subset of relations. A relation is a connection between values in one set and values in another. In other words, each number you put in is associated with each number you get out. In a function every input number is associated with exactly one output number In a relation an input number may be associated with multiple or no output numbers. This is an important fact about functions that cannot be stressed enough: every possible input to the function must have one and only one output. All functions are relations, but not all relations are functions.

Graphs provide a visual representation of functions, showing the relationship between the input values and output values.

Describe the relationship between graphs of equations and graphs of functions

We say that
x
is independent because we can pick any value for which the function is defined, in this case the set of real numbers
R
, as inputs into the function. We say the result is assigned to the dependent variable since it depends on what value we placed into the function.

Start by graphing as if
f(x)
is a linear equation:

We choose a few values for the independent variable,
x
.  Let's choose a negative value, zero, and a positive value:

Next, substitute these values into the function for
x
, and solve for
f(x)
(which means the same as the dependent variable
y
):  we get the ordered pairs:

This function is that of a line, since the highest exponent in the function is a
1
, so simply connect the three points. Extend them in either direction past the points to infinity, and we have our graph. 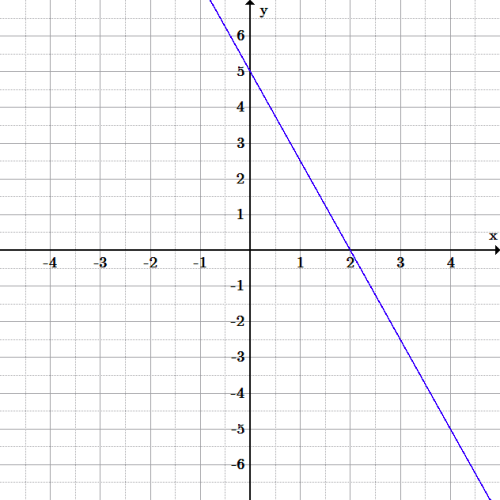 Line graph: This is the graph of the function
f(x)=5−25​x
.  The function is linear, since the highest degree in the function is a
1
.  Only two points are required to graph a linear function.

Start by choosing values for the independent variable,
x
. This function is more complicated than that of a line so we'll need to choose more points. Let us choose:

Next place these points on the graph, and connect them as best as possible with a curve. The graph for this function is below. 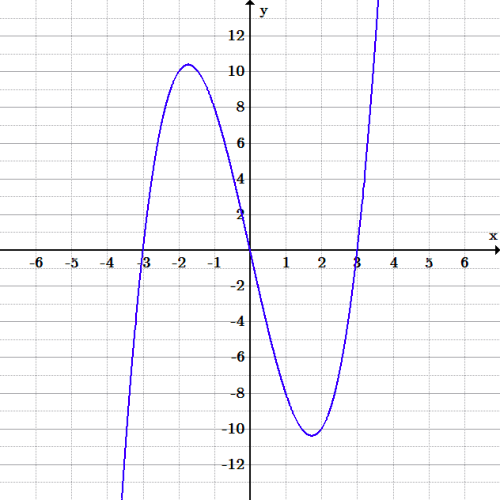 Explain why the vertical line test shows, graphically, whether or not a curve is a function


In mathematics, the vertical line test is a visual way to determine if a curve is a graph of a function, or not. Recall that a function can only have one output,
y
, for each unique input,
x
. If any
x
-value in a curve is associated with more than one
y
-value, then the curve does not represent a function.

intersect a curve at most once then the curve represents a function. 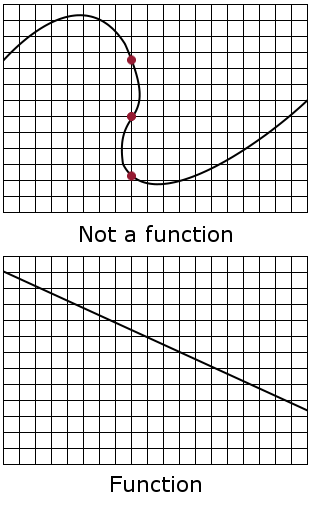 To use the vertical line test, take a ruler or other straight edge and draw a line parallel to the

Refer to the three graphs below,
(a)
,
(b)
, and
(c)
. Apply the vertical line test to determine which graphs represent functions.

If any vertical line intersects a graph more than once, the relation represented by the graph is not a function. Notice that any vertical line would pass through only one point of the two graphs shown in graphs

(a)
and
(b)
. From this we can conclude that these two graphs represent functions. The third graph,
(c)
, does not represent a function because, at most
x
-values, a vertical line would intersect the graph at more than one point. This is shown in the diagram below. 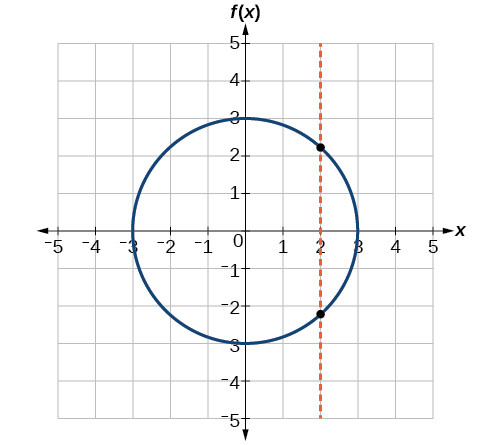 Not a Function: The vertical line test demonstrates that a circle is not a function.

BUSINESS A MATH 1201 •  University of the People

MATH 1201 •  University of the Fraser Valley

BUSINESS 6062 •  The National University of Malaysia