Nonlinear Systems of Equations and Inequalities

Nonlinear Systems of Equations and Problem-Solving

As with linear systems, a nonlinear system of equations (and conics) can be solved graphically and algebraically for all of its variables.

A conic section (or just conic) is a curve obtained as the intersection of a cone (more precisely, a right circular conical surface) with a plane. In analytic geometry, a conic may be defined as a plane algebraic curve of degree 2. There are a number of other geometric definitions possible. The four types of conic section are the hyperbola, the parabola, the ellipse, and the circle, though the circle can be considered to be a special case of the ellipse.

In a system of equations, two or more relationships are stated among variables. A system is solvable as long as there are as many simultaneous equations as variables. If each equation is graphed, the solution for the system can be found at the point where all the functions meet. The solution can be found either by inspection of a graph, typically by using graphing or plotting software, or algebraically.

Nonlinear systems of equations, such as conic sections, include at least one equation that is nonlinear. A nonlinear equation is defined as an equation possessing at least one term that is raised to a power of 2 or more. When graphed, these equations produce curved lines.

Consider, for example, the following system of equations: 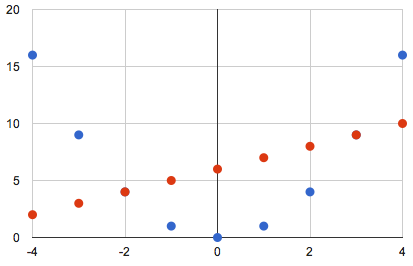 Integer values of
y=x2
(blue) and
y=x+6
(red): The parabola (blue) falls below the line (red) between
x=−2
and
x=3
. For all values of
x
less than
−2
and greater than
3
, points on the parabola are above the line.
We can solve this system algebraically by using equation
(1)
as a substitution. The quantity
x2
must be equivalent to the quantity
y
, so we substitute
x2
for
y
in equation
(2)
:

This quadratic equation can be solved by moving all the equation's components to the left before using the quadratic formula:

The solutions for
x
can then be plugged into either of the original systems to find the value of
y
. In this example, we will use equation
(1)
:


Nonlinear systems of equations are not just for hypothetical discussions—they can be used to solve complex problems involving multiple known relationships.

Consider, for example, a car that begins at rest and accelerates at a constant rate of
4
meters per second each second. Its position in meters (
y
) can be determined as a function of time in seconds (
t
), by the formula:

Now consider a second car, traveling at a constant speed of
20
meters per second. Its position (
y
) in meters can be determined as a function of time (
t
) in seconds, using the following formula:

To determine where the cars are when they are alongside one another and how much time has passed since the first began to accelerate, we can algebraically solve the system of equations using substitution:

Solving for
t
, we can find that the cars are side-by-side after
20
seconds.

Substituting
20
for
t
into the equations for either of the cars, we can find that the cars meet
800
meters ahead of the first car's starting point. Note that a question on an exam may not prompt solutions for both variables.

Some other real-world examples of nonlinear systems include:

In addition to practical scenarios like the above, nonlinear systems can be used in abstract problems. For example, a question on an exam could ask:

The product of two numbers is 12, and the sum of their squares is 40. What are the numbers?

In this case, we could make an equation for each known relationship:

Substitution can be used to calculate that the numbers are 2 and 6.

Systems of nonlinear inequalities can be solved by graphing boundary lines.


A system of inequalities consists of two or more inequalities, which are statements that one quantity is greater than or less than another. A nonlinear inequality is an inequality that involves a nonlinear expression—a polynomial function of degree 2 or higher. The most common way of solving one inequality with two variables
x
and
y
is to shade the region on a graph where the inequality is satisfied. 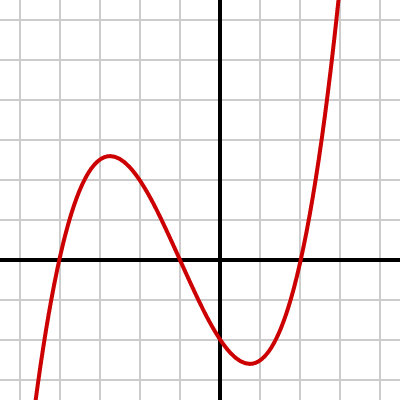 Every inequality has a boundary line, which is the equation produced by changing the inequality relation to an equals sign. The boundary line is drawn as a dashed line (if
<
or
>
is used) or a solid line (if
≤
or
≥
is used). One side of the boundary will have points that satisfy the inequality, and the other side will have points that falsify it. By testing individual points, the correct region can be shaded. If we have two inequalities, therefore, we shade in the overlap region, where both inequalities are simultaneously satisfied.

Consider, for example, the system including the parabolic nonlinear inequality:

and the linear inequality:

Graphing both inequalities reveals one region of overlap: the area where the parabola dips below the line. This area is the solution to the system. 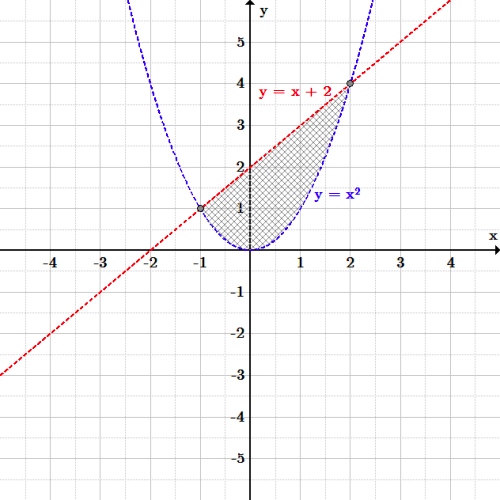 Nonlinear system of inequalities: Any point in the region between the line
y=x+2
and the parabola
y=x2
satisfies the system of inequalities.
The limits of each inequality intersect at
(−1,1)
and
(2,4)
. Note that the area above
y=x2
that is also below
y=x+2
is closed between those two points. Whereas a solution for a linear system of equations will contain an infinite, unbounded area (lines can only pass one another a maximum of once), in many instances, a solution for a nonlinear system of equations will consist of a finite, bounded area.

This need not be the case with all nonlinear inequalities, but reversing the direction of both inequalities in the previous example would lead to an infinite solution area.