Chemical digestion is the enzyme-mediated, hydrolysis process that breaks down large macronutrients into smaller molecules.

Differentiate among the methods used to chemically break down food molecules

Because amylase turns some potato or rice starch into sugar, these foods taste slightly sweet.

Catabolism: A simplified outline of the catabolism of proteins, carbohydrates, and fats.

Carbohydrates are taken in mainly in the form of plant carbohydrate (amylose) and animal carbohydrate (glycogen) together with some sugars, mainly disaccharides. About 80% of the western diet is in the form of amylose. Amylose is not highly branched and consists mainly of long chains of glucose linked by α1:4 linkages.

Cellulose, the most abundant starch in nature, is formed of β1:4 linkages and cannot be digested in humans, although the bacterial action in the colon does break down a minute amount of it.

Glycogen is a multi-branched starch with linkages at the 1:4 and 1:6 position. This creates very large granules of multi-branched starch. Both the parotid and pancreatic amylases hydrolyse the 1:4 link, but not the terminal 1:4 links or the 1:6 links. This breaks amylose down into mainly disaccharides, and glycogen with its 1:6 linkages into polysaccharides.

The net result of these actions are numerous disaccharides and polysaccharides. Enzymes attached to the enterocycytes of the small intestine break these down to monosaccharides. 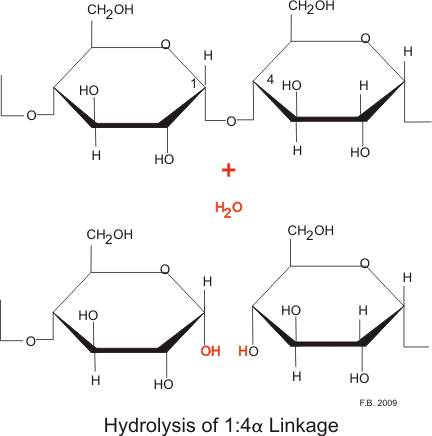 Hydrolysis by amylase: Both the parotid and pancreatic amylases hydrolyse the 1:4 link, but not the terminal 1:4 links or the 1:6 links.

Proteins and polypeptides are digested by hydrolysis of the carbon–nitrogen (C–N) bond. The proteolytic enzymes are all secreted in an inactive form, to prevent auto-digestion, and are activated in the lumen of the gut. Activation is caused by HCl in the case of the stomach enzyme pepsinogen, and by enteropeptidase and trypsin in the case of the pancreatic enzymes.

Final digestion takes place by small intestine enzymes that are embedded in the brush border of the small intestine. The enzymes are divided into endo- and exo-peptidases.

Stomach pepsin cleaves the interior bonds of the amino acids, and is particularly important for its ability to digest collagen. This is a major constituent of the connective tissue of meat. In the absence of stomach pepsin, digestion in the small intestine proceeds with difficulty. Stomach pepsin digests about 20% of the proteins, and the rest are digested by the pancreatic and small intestine enzymes. 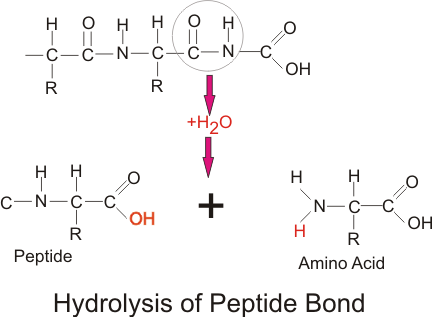 Hydrolysis of peptide bond: Proteins and polypeptides are digested by hydrolysis of the C–N bond.

Fats are digested by lipases that hydrolyze the glycerol fatty acid bonds. Of particular importance in fat digestion and absorption are the bile salts, which emulsify the fats to allow for their solution as micelles in the chyme, and increase the surface area for the pancreatic lipases to operate.

Lipases are found in the mouth, the stomach, and the pancreas. Because the lingual lipase is inactivated by stomach acid, it is formally believed to be mainly present for oral hygiene and for its anti-bacterial effect in the mouth. However, it can continue to operate on food stored in the fundus of the stomach, and as much as 30% of the fats can be digested by this lipase.

Gastric lipase is of little importance in humans. Pancreatic lipase accounts for the majority of fat digestion and operates in conjunction with the bile salts.

RNA and DNA are hydrolized by the pancreatic enzymes (ribonucleases, deoxyribonucleases) into nucleic acids, which are further broken down to purine and pyrimidine bases and pentoses, by enzymes in the intestinal mucosa (nucleases).

The chemical breakdown of the macromolecules contained in food is completed by various enzymes produced in the digestive system.

Protein digestion occurs in the stomach and the duodenum through the action of three primary enzymes:

These enzymes break down food proteins into polypeptides that are then broken down by various exopeptidases and dipeptidases into amino acids. The digestive enzymes, however, are secreted mainly as their inactive precursors, the zymogens.

Thus, trypsin is secreted by the pancreas in the form of trypsinogen, which is activated in the duodenum by enterokinase to form trypsin. Trypsin then cleaves proteins into smaller polypeptides.

In humans, dietary starches are composed of glucose units arranged in long chains of polysaccharide called amylose. During digestion, the bonds between glucose molecules are broken by salivary and pancreatic amylase, and result in progressively smaller chains of glucose. This process produces the simple sugars glucose and maltose (two glucose molecules) that can be absorbed by the small intestine.

Sucrase is an enzyme that breaks down disaccharide sucrose, commonly known as table sugar, cane sugar, or beet sugar. Sucrose digestion yields the sugars fructose and glucose, which are readily absorbed by the small intestine.

Lactase is an enzyme that breaks down the disaccharide lactose into its component parts, glucose and galactose, that are absorbed by the small intestine. Approximately half the adult population produces only small amounts of lactase and are therefore unable to eat milk-based foods. This condition is commonly known as lactose intolerance.

The digestion of certain fats begins in the mouth, where lingual lipase breaks down short chain lipids into diglycerides. The presence of fat in the small intestine produces hormones that stimulate the release of pancreatic lipase from the pancreas, and bile from the liver, to enable the breakdown of fats into fatty acids. The complete digestion of one molecule of fat (a triglyceride) results in three fatty acid molecules and one glycerol molecule.

DNA and RNA are broken down into mononucleotides by the nucleases deoxyribonuclease and ribonuclease (DNase and RNase), which are released by the pancreas. 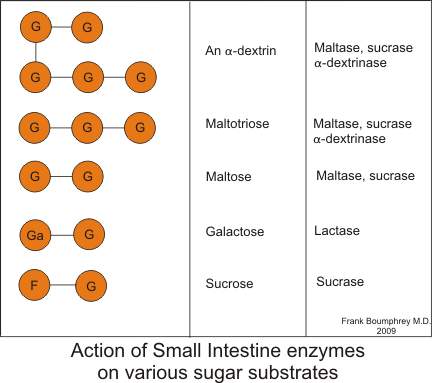 Carbohydrate digestion: A diagram of the action of the oligosaccharide-cleaving enzymes in the small intestine. 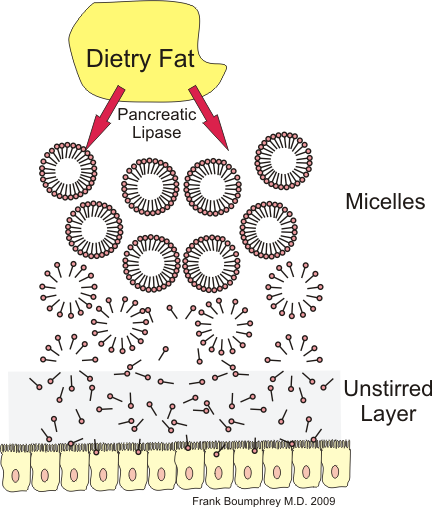 CHEM 43 •  Univ of the Philippines Manila