Distinguish between the types of cytokines participating in immune response


Cytokines are small cell-signaling protein molecules secreted by numerous cells and used extensively in intercellular communication. Cytokines can be classified as proteins, peptides, or glycoproteins. They provide the signaling pathways that orchestrate the complex immune responses of the human body. Cytokines are similar to hormones, which are also chemical messengers, but hormones have considerably more variation in molecular structure and are involved more in tissue signaling than cellular signaling.

Each cytokine has a matching cell-surface receptor. Subsequent cascades of intracellular signalling then alter cell functions. This may include the upregulation (increased expression) and/or downregulation (decreased expression) of several genes and their transcription factors resulting in the production of other cytokines, an increase in the number of surface receptors for other molecules, or the suppression of their own effects by feedback inhibition. 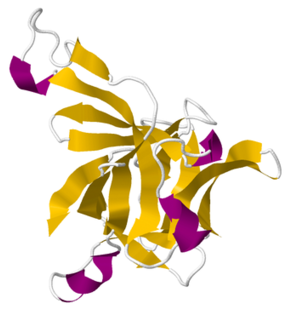 Interleukins are a class of cytokines primarily expressed by leukocytes. They are glycoproteins involved in the signaling of many types of immune system functions. There are 17 different families of interleukins. Some of the more important ones include inflammatory mediators such as IL-1, IL-4, and IL-6, the potent anti-inflammatory IL-10, and other interleukins involved with T and B cell signaling following antigen presentation. Many interleukins are also considered lymphokines, interleukins released by helper T cells to organize immune responses.

Interferons are protein cytokines that have antiviral functions. They can activate macrophages and natural killer (NK) cells to attack and lyse virus-infected cells. One common interferon is IFN-gamma, a pyrogen involved in inflammatory response and macrophage and NK cell activation. IFN-gamma is produced by T cells (both CD4 and CD8) and NK cells.

Chemokines are protein cytokines that are mainly involved in facilitating chemotaxis (chemical-stimulated movement) in immune cells. Leukocytes travel along chemotactic gradients that guide them to sites of injury, infection, or inflammation. By definition, inflammatory mediators in other classes of cytokines are also considered chemokines. This category also includes cytokines that are only involved in leukocyte migration, such as CCL2 which causes monocyte chemotaxis and stimulates its differentiation into macrophages inside of tissues.

Tumor necrosis factor (TNF) are cytokines that induce apoptosis in abnormal cells such as tumor cells. It is a protein released by NK cells, macrophages, and helper T cells, typically in systemic immune responses. TNF-alpha is the most notable example. This long-lasting inflammatory mediator and pyrogen can cause fever and inflammation for up to 24 hours. It also stimulates acute phase reaction in the liver, a component of systemic immune system activation where the liver makes proteins involved in immune system response such as complement proteins. TNF-alpha is released in very high amounts in response to lipopolysaccharide  (infection with gram negative bacteria), which facilitates much of the self-destructive immune response in septic shock. In these cases, TNF-alpha can cause organ failure from tissue hypoperfusion, caused by damage and blood clotting from an overactive immune response.

Anatomy and physiology is the study of the body.docx

Importance of Anatomy and Physiology Summary.docx