Development of the Skeleton

Development of the Skeleton

Early in gestation, a fetus has a cartilaginous skeleton that becomes bone in the gradual process of endochondral ossification.

Compare and contrast osteogenesis by intramembranous and endochondral ossification


Early in gestation, a fetus has a cartilaginous skeleton from which the long bones and most other bones gradually form throughout development and for years after birth in a process called endochondral ossification. Ossification or osteogenesis is the process of laying new bone material by cells called osteoblasts. Two processes result in the formation of normal, healthy bone tissue. Intramembranous ossification is the direct laying of bone into the primitive connective tissue (mesenchyme). This is how the flat bones of the skull and the clavicles are formed. Endochondral ossification involves cartilage as a precursor. Ossification of the mandible occurs in the fibrous membrane covering the outer surfaces of Meckel's cartilages. 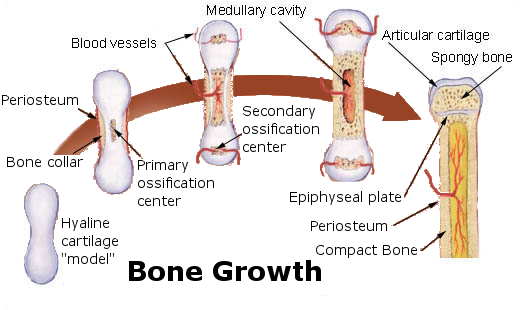 Endochondral Ossification: The development of the primary and secondary ossification centers

In bones developed in membrane, no cartilaginous mold precedes the appearance of the bony tissue. The membrane that occupies the place of the future bone resembles connective tissue and ultimately forms the periosteum; it is composed of fibers and granular cells in a matrix. The peripheral portion is more fibrous, while in the interior the cells or osteoblasts predominate. The whole tissue is richly supplied with blood vessels. As the osteogenetic fibers grow out to the periphery, they continue to calcify and give rise to fresh bone spicules. Thus, a network of bone is formed, the meshes of which contain the blood vessels and a delicate connective tissue crowded with osteoblasts. Osteoblasts add layers of fresh bone to the trabeculae. These layers subsequently encroach upon the mesh, under the periosteum, and around the larger vascular channels that become the Haversian canals, thickening and developing the bones.

The perichondrium becomes the periosteum, which contains a layer of undifferentiated cells (osteoprogenitor cells) that later become osteoblasts. These osteoblasts secrete osteoid against the shaft of the cartilage model that serves as support for the new bone. Chondrocytes in the primary center of ossification begin to grow (hypertrophy). They stop secreting collagen and other proteoglycans and begin secreting alkaline phosphatase, an enzyme essential for mineral deposition. Then calcification of the matrix occurs and the hypertrophic chondrocytes begin to die, creating cavities within the bone. The hypertrophic chondrocytes (before apoptosis) secrete vascular endothelial cell growth factor, which induces the sprouting of blood vessels from the perichondrium. Blood vessels forming the periosteal bud invade the cavity left by the chondrocytes and branch in opposite directions along the length of the shaft. The blood vessels carry hemopoietic cells, osteoprogenitor cells, and other cells inside the cavity. The hemopoietic cells will later form the bone marrow. Osteoblasts, differentiated from the osteoprogenitor cells that entered the cavity via the periosteal bud, use the calcified matrix as a scaffold and begin to secrete osteoid, which forms the bone trabecula. Osteoclasts, formed from macrophages, break down spongy bone to form the medullary (bone marrow) cavity.

Aging and the Skeleton

In osteoporosis, bone mineral density (BMD) is reduced and the integrity of bone proteins is altered, increasing the risk of fracture.

Construct a diagnosis and treatment plan for osteoporosis


Osteoporosis is a bone disease that leads to an increased risk of fracture. In osteoporosis, the bone mineral density (BMD) is reduced, bone microarchitecture deteriorates, and the amount and variety of proteins in bone is altered. 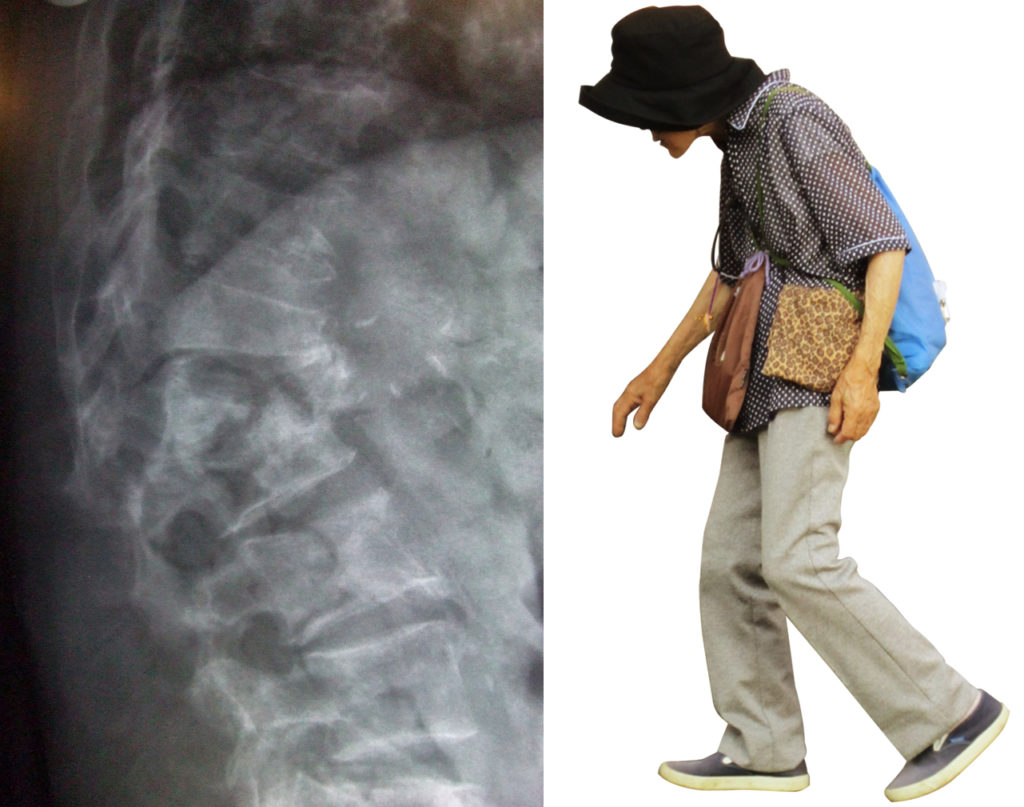 (a) Osteoporotic Fractures and (b) Woman with Osteoporosis: Image shows compression fractures of the lumbar spine. Hyperkyphosis, colloquially called a "dowager's hump," refers to an anteriorly concave curvature of the thoracic region of the spine.

Primary type two osteoporosis or senile osteoporosis occurs after age 75 and is seen in both females and males at a ratio of two to one. Finally, secondary osteoporosis may arise at any age and affect men and women equally. This form of osteoporosis results from chronic illness or prolonged use of medications such as glucocorticoids. Osteoporosis affects 55% of Americans aged 50 and above. Of these, approximately 80% are women.

Osteoporosis itself has no symptoms; its main consequence is the increased risk of fractures caused by weakened bones. Osteoporotic fractures, called fragility fractures, occur in situations where healthy people would not normally break a bone. These often affect the vertebral column, rib, hip, and wrist. The underlying mechanism in all cases of osteoporosis is an imbalance between bone resorption and bone formation.

Physical deformation can occur secondary to compromised bone densities. One example is hyperkyphosis, colloquially called a "dowager's hump," which refers to an anteriorly concave curvature of the thoracic region of the spine.

Osteoporosis risks can be reduced with lifestyle changes and sometimes medication. Lifestyle changes include diet, exercise, and fall prevention. Exercises to tone deambulatory muscles and improve proprioception are recommended to decrease risk for falls. In addition, the anabolic effect of exercise can sometimes prevent progression of osteoporosis. Medication includes calcium, vitamin D, and bisphosphonates.