Overview of the Reproductive System

Overview of the Male and Female Reproductive Systems

The human reproductive system functions to produce human offspring, with the male providing sperm and the female providing the ovum.

Summarize the reproductive systems of men and women

While the ultimate purpose of the human reproductive system is to produce offspring, the proximate purpose is to produce pleasure and induce bonding. This can be seen in our closest relatives, the bonobo chimpanzees, who have sex for a wide variety of reasons including pleasure, bonding, and alleviating tension in addition to producing offspring.


The reproductive system or genital system is a set of organs within an organism that work together to produce offspring. Many non-living substances, such as fluids, hormones, and pheromones, are important accessories to the reproductive system. Unlike most organ systems, the sexes of differentiated species often have significant differences. These differences allow for a combination of genetic material between two individuals and thus the possibility of greater genetic fitness of the offspring.

Human reproduction takes place as internal fertilization by sexual intercourse. During this process, the erect penis of the male is inserted into the female's vagina until the male ejaculates semen, which contains sperm, into the vagina. The sperm travels through the vagina and cervix into the uterus for potential fertilization of an ovum. Upon successful fertilization and implantation, gestation of the fetus occurs within the female's uterus for approximately nine months (pregnancy). Gestation ends with labor resulting in birth. In labor, the uterine muscles contract, the cervix dilates, and the baby passes out through the vagina. Human babies and children are nearly helpless and require high levels of parental care for many years. One important type of parental care is the use of the mammary glands in the female breasts to nurse the baby.

The human male reproductive system is a series of organs located outside of the body and around the pelvic region. The primary direct function of the male reproductive system is to provide the male gamete or spermatozoa for fertilization of the ovum. The major reproductive organs of the male can be grouped into three categories. The first category is sperm production and storage. Production takes place in the testes, housed in the temperature-regulating scrotum. Immature sperm then travel to the epididymis for development and storage. The second category, the ejaculatory fluid-producing glands, includes the seminal vesicles, prostate, and vas deferens. The final category, used for copulation and deposition of the spermatozoa (sperm) within the female, includes the penis, urethra, vas deferens, and Cowper's gland. 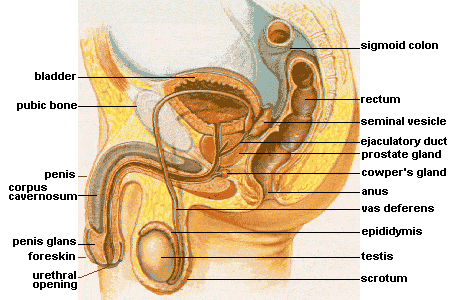 Only our species has a distinctive mushroom-capped glans, which is connected to the shaft of the penis by a thin tissue of frenulum (the delicate tab of skin just beneath the urethra). One of the most significant features of the human penis is the coronal ridge underneath the gland around the circumference of the shaft. Magnetic imaging studies of heterosexual couples having sex reveal that during coitus, the typical penis expands to fill the vaginal tract, and with full penetration can even reach the woman's cervix and lift her uterus. This combined with the fact that human ejaculate is expelled with great force and considerable distance (up to two feet if not contained), suggests that men are designed to release sperm into the uppermost portion of the vagina. This may be an evolutionary adaptation to expel the semen left by other males while at the same time increasing the possibility of fertilization with the current male's semen.

The human female reproductive system is a series of organs primarily located inside the body and around the pelvic region. It contains three main parts: the vagina, which leads from the vulva, the vaginal opening, to the uterus; the uterus, which holds the developing fetus; and the ovaries, which produce the female's ova. The breasts are also a reproductive organ during parenting, but are usually not classified as part of the female reproductive system. The vagina meets the outside at the vulva, which also includes the labia, clitoris, and urethra. During intercourse, this area is lubricated by mucus secreted by the Bartholin's glands. The vagina is attached to the uterus through the cervix, while the uterus is attached to the ovaries via the Fallopian tubes. At certain intervals, approximately every 28 days, the ovaries release an ovum that passes through the Fallopian tube into the uterus.

If the ova is fertilized by sperm, it attaches to the endometrium and the fetus develops. In months when fertilization does not occur, the lining of the uterus, called the endometrium, and unfertilized ova are shed each cycle through a process known as menstruation. 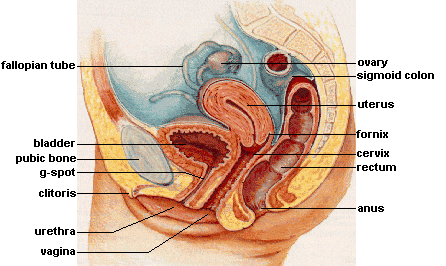