Protection of the Brain

Describe the function of the blood-brain barrier


The blood-brain barrier (BBB) is a separation of circulating blood from the brain extracellular fluid in the central nervous system (CNS). Bacteriologist Paul Ehrlich observed that chemical dye injected into an animal would stain all of its organs except for the brain. In a later experiment, his student Edwin Goldmann found that when dye is directly injected into the cerebrospinal fluid (CSF) of animals' brains, the brains were dyed while the rest of the organs were unaffected. This clearly demonstrated the existence of some sort of compartmentalization between the brain and the rest of the body. The concept of the BBB (then termed hematoencephalic barrier) was proposed by Lewandowsky in 1900. It was not until the introduction of the scanning electron microscope that the actual membrane could be observed and proven to exist. 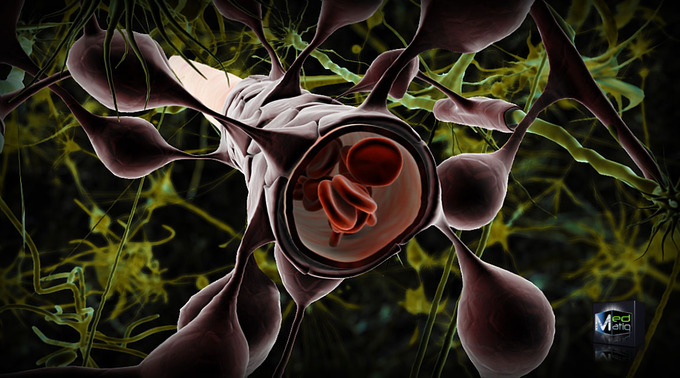 The Blood Brain Barrier at the Small Scale: Astrocytes send projections to completely encircle capillaries. This allows tight regulation of passage of molecules into and out of the CNS.

The BBB results from the selectivity of the tight junctions between endothelial cells in CNS vessels that restrict the passage of solutes. At the interface between blood and the brain, endothelial cells are joined by these tight junctions, which are composed of smaller subunits, frequently biochemical dimers that are transmembrane proteins such as occludin, claudins, and junctional adhesion molecule. Each of these transmembrane proteins is anchored into the endothelial cells by another protein complex. This barrier also includes a thick basement membrane and astrocyte cell projections called astrocytic feet (forming the thin barrier called the glia limitans) that surround the endothelial cells of the BBB, providing biochemical support to those cells.

Function and Importance of the Blood-Brain Barrier

The BBB endothelial cells restrict the passage of substances from the bloodstream to a greater extent than endothelial cells in capillaries elsewhere in the body. The diffusion of microscopic particles (e.g., bacteria), large molecules, and hydrophilic molecules into the CSF is restricted, while the diffusion of small hydrophobic molecules (O2, CO2, hormones ) is permitted. Also, BBB cells actively transport metabolic products such as glucose across the barrier.

Non-Protected Areas of the Brain

Several areas of the human brain are not protected by the BBB. These include the circumventricular organs such as the area postrema, median eminence of the hypothalamus, pineal gland, and the posterior pituitary. The posterior pituitary and pineal gland are not covered by the BBB because they secrete hormones into circulation. The median eminence is not covered by BBB because the pituitary secretions collect in this area before release into circulation. The area postrema detects noxious substances present in the blood and is therefore not covered by the BBB.

The BBB effectively protects the brain from many common bacterial infections, so brain infections are very rare. However, since antibodies and antibiotics are too large to cross the BBB, brain infections that do occur are often very serious and difficult to treat. However, the BBB becomes more permeable during inflammation. This allows some antibiotics and phagocytes to move across the BBB, but also allows bacteria and virus to cross. Diseases caused by spirochetes are exceptions to this bacterial exclusion. These include Borrelia (the cause of Lyme disease), and Treponema pallidum, which causes syphilis. These harmful bacteria seem to breach the BBB by physically tunneling through the blood vessel walls. Some toxins are made up of large molecules that cannot pass through the BBB. Neurotoxins such as botulinum toxin in food might affect peripheral nerves, but the BBB can often prevent such toxins from reaching the CNS, where they could cause serious or fatal damage.

Cerebrospinal Fluid and Its Circulation

Cerebrospinal fluid is a clear fluid that acts as a cushion for the brain and maintains overall central nervous system homeostasis.

A 2010 study showed that analysis of CSF for three protein biomarkers can indicate the presence of Alzheimer's disease. The three biomarkers are CSF amyloid beta 1-42, total CSF tau protein, and P-Tau181P. In the study, the biomarker test showed good sensitivity, identifying 90% of persons with Alzheimer's disease, but poor specificity, as 36% of control subjects were positive for the biomarkers. The researchers suggested that the low specificity may be explained by developing but not yet symptomatic disease in controls.


Cerebrospinal fluid (CSF) is a clear, colorless bodily fluid that occupies the subarachnoid space and the ventricular system around and inside the brain and spinal cord. The CSF occupies the space between the arachnoid mater (the middle layer of the brain cover, the meninges ) and the pia mater (the layer of the meninges closest to the brain). It constitutes the content of all intracerebral ventricles, cisterns, and sulci (singular sulcus), as well as the central canal of the spinal cord. It acts as a cushion or buffer for the cortex, providing a basic mechanical and immunological protection for the brain inside the skull and serving a vital function in cerebral autoregulation of cerebral blood flow.

Between 50 to 70% of CSF is produced in the brain by modified ependymal cells in the choroid plexus, and the remainder is formed around blood vessels and along ventricular walls. It circulates from the lateral ventricles to the foramen of Monro (interventricular foramen), third ventricle, aqueduct of Sylvius (cerebral aqueduct), fourth ventricle, foramen of Magendie (median aperture), foramen of Luschka (lateral apertures), and the subarachnoid space over the brain and the spinal cord. CSF is reabsorbed into venous sinus blood via arachnoid granulations.

Subarachnoid Cavity: Diagrammatic representation of a section across the top of the skull, showing the membranes of the brain with the subarachnoid cavity visible on the left.

CSF is produced at a rate of 500 ml/day. Since the subarachnoid space around the brain and spinal cord can contain only 135 to 150 ml, large amounts are drained into the blood through arachnoid granulations in the superior sagittal sinus. Thus, the CSF turns over about 3.7 times a day. This continuous flow into the venous system dilutes the concentration of larger, lipid-insoluble molecules penetrating the brain and CSF. The CSF contains approximately 0.3% plasma proteins, or approximately 15 to 40 mg/dL, depending on the sampling site.

The functions of CSF include:

CSF as a Diagnostic Tool

When CSF pressure is elevated, cerebral blood flow may be constricted. When disorders of CSF flow occur, they may therefore affect not only CSF movement but also craniospinal compliance and intracranial blood flow, with subsequent neuronal and glial vulnerabilities. The venous system is also important in this equation. CSF can be tested for the diagnosis of various neurological diseases, usually with a procedure called lumbar puncture. Lumbar puncture is performed in an attempt to count the cells in the fluid and to detect the levels of protein and glucose. These parameters alone may be extremely beneficial in the diagnosis of subarachnoid hemorrhage and CNS infections such as meningitis. Moreover, a CSF culture examination may yield the microorganism that has caused the infection.

The ventricular system is a set of hollow cavities in the brain filled with cerebrospinal fluid.

Describe the function and locations of the ventricles in the brain

In the late 1970s, CT scans of the ventricles revolutionized the study of mental disorders. Researchers found that on average, individuals with schizophrenia had enlarged ventricles compared to healthy subjects. This became the first evidence that mental disorders are biological in origin and led to a reinvigoration of the study of such conditions via modern scientific techniques.


The ventricular system is a set of four interconnected cavities (ventricles) in the brain and the location of CSF production. This system is continuous with the central canal of the spinal cord. The system comprises four ventricles:

The cavities of the cerebral hemispheres are called lateral ventricles or first and second ventricles. These two ventricles open into the third ventricle by a common opening called the foramen of Monro. CSF is produced by modified ependymal cells of the choroid plexus found in all components of the ventricular system except for the cerebral aqueduct and the posterior and anterior horns of the lateral ventricles. The brain and spinal cord are covered by a series of tough membranes called meninges, which protect these organs from rubbing against the bones of the skull and spine. The CSF within the skull and spine is found between the pia mater and the arachnoid and provides further cushioning. EndFra

CSF flows from the lateral ventricles via the foramina of Monro into the third ventricle, and then into the fourth ventricle via the cerebral aqueduct in the brainstem. From there, it passes into the central canal of the spinal cord and into the cisterns of the subarachnoid space via three small foramina: the central foramen of Magendie and the two lateral foramina of Luschka. The fluid then flows around the superior sagittal sinus to be reabsorbed via the arachnoid villi into the venous system. CSF within the spinal cord can flow all the way down to the lumbar cistern at the end of the cord around the cauda equina.

Diseases of the ventricular system include abnormal enlargement (hydrocephalus) and inflammation of the CSF spaces (meningitis, ventriculitis) caused by infection or introduction of blood following trauma or hemorrhage. The aqueduct between the third and fourth ventricles is very small, as are the foramina. This means they can be easily blocked, causing high pressure in the lateral ventricles. This is a common cause of hydrocephalus (known colloquially as "water on the brain"), an extremely serious condition due to the damage caused by the pressure as well as the nature of the block (e.g., a tumor or inflammatory swelling).

Embryonic Development of the Ventricles

Lesson 6.3_ Labeling the Brain _ Introduction to Anatomy and Physiology (Shayla).pdf

Anatomy and physiology of the brain and spinal cord

ANATOMY AND PHYSIOLOGY OF THE bRAIN.pptx

BIOLOGY 2310 •  Our Lady of The Lake University

Anatomy and Physiology I Brain and Cranial Nerves fall 2017 (1).ppt