Blood pressure is a vital sign reflecting the pressure exerted on blood vessels when blood is forced out of the heart during contraction.

Explain the topic of blood pressure

Blood pressure is one of the principal vital signs. During each heartbeat, blood pressure varies between a maximum (systolic) and a minimum (diastolic) pressure. A normal blood pressure should be around 120/80, with the systolic pressure expressed first. 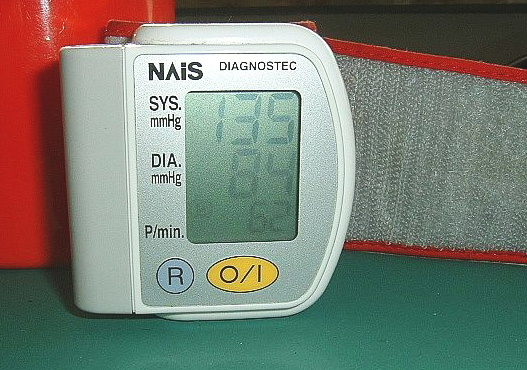 Measurement of vital signs using a sphygmomanometer: Blood pressure and pulse, or the vital signs, are measured as indicators of several aspects of cardiovascular health.

The measurement of blood pressure without further specification usually refers to systemic arterial pressure measured at the upper arm.

Blood pressure in the arteries is much higher than in the veins, in part due to receiving blood from the heart after contraction, but also due to their contractile capacity. The tunica media of arteries is thickened compared to veins, with smoother muscle fibers and elastic tissue. Together, these generate of elastic recoil and blood vessel contraction, allowing for the maintenance of a higher pressure. 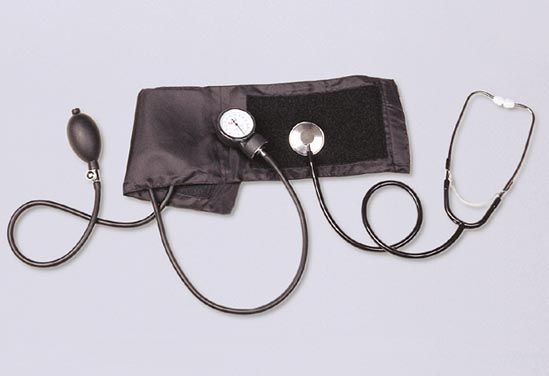 Typical Tools of Auscultatory Measurement: Shown here are a stethoscope and a sphygmomanometer, used for ascultatory measurement.

While average values for arterial pressure could be computed for any given population, there is extensive variation from person to person and even from minute to minute for an individual. Additionally, the average arterial pressure of a given population has only a questionable correlation with its general health. However, in a study of 100 human subjects with no known history of hypertension, the average blood pressure of 112/64 mmHg, currently classified as a desirable or "normal" value. Normal values fluctuate through the 24-hour cycle, with the highest readings in the afternoons and lowest readings at night 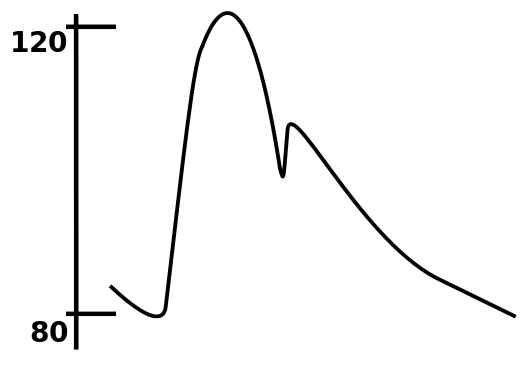 The risk of cardiovascular disease increases progressively above 115/75 mmHg. In the past, hypertension was only diagnosed if secondary signs of high arterial pressure were present along with a prolonged high systolic pressure reading over several visits. Hypotension is typically diagnosed only if noticeable symptoms are present. Clinical trials demonstrate that people who maintain arterial pressures at the low end of these ranges have much better long-term cardiovascular health. The principal medical debate concerns the aggressiveness and relative value of methods used to lower pressures into this range for those with high blood pressure. Elevations more commonly seen in older people, though often considered normal, are associated with increased morbidity and mortality.

Arterial hypertension can be an indicator of other problems and may have long-term adverse effects. Sometimes it can be an acute problem, such as a hypertensive emergency. All levels of arterial pressure put mechanical stress on the arterial walls. Higher pressures increase heart workload and progression of unhealthy tissue growth (atheroma) that develops within the walls of arteries. The higher the pressure, the more stress that is present, the more the atheroma tends to progress, and the more heart muscle may thicken, enlarge, and weaken over time.

Persistent hypertension is one of the risk factors for strokes, heart attacks, heart failure, and arterial aneurysms, and is the leading cause of chronic renal failure. Even moderate elevation of arterial pressure leads to shortened life expectancy. At mean arterial pressures 50% or more above average, a person can expect to live no more than a few years unless appropriately treated.

Venous pressure is the vascular pressure in a vein or the atria of the heart, and is much lower than arterial pressure.

Blood pressure generally refers to the arterial pressure in the systemic circulation. However, measurement of pressures in the human venous system and the pulmonary vessels play an important role in intensive care medicine and are physiologically important in ensuring proper return of blood to the heart, maintaining flow in the closed circulatory system.

The Human Venous System: Veins (from the Latin vena) are blood vessels that carry blood towards the heart. Veins differ from arteries in structure and function; arteries are more muscular than veins, while veins are often closer to the skin and contain valves to help keep blood flowing toward the heart.

In general, veins function to return deoxygenated blood to the heart, and are essentially tubes that collapse when their lumens are not filled with blood. Compared with arteries, the tunica media of veins, which contains smooth muscle or elastic fibers allowing for contraction, is much thinner, resulting in a compromised ability to deliver pressure. The actions of the skeletal-muscle pump and the thoracic pump of breathing during respiration aid in the generation of venous pressure and the return of blood to the heart.

The pressure within the circulatory circuit as a whole is mean arterial pressure (MAP). This value is a function of the cardiac output (total blood pumped) and total peripheral resistance (TPR). TPR is primarily a function of the resistance of the systemic circulation. The resistance to flow generated by veins, due to their minimal ability to contract and reduce their diameter, means that regulation of blood pressure by veins is minimal in contrast to that of muscular vessels, primarily arterioles. The latter can actively contract, reduce diameter, and increase resistance and pressure. In addition, veins can easily distend or stretch. A vein's ability to increase in diameter in response to a given blood volume also contributes to the very low pressures within this segment of the circulatory system.

Standing or sitting for a prolonged period of time can cause low venous return in the absence of the muscle pump, resulting in venous pooling (vascular) and shock. Fainting can occur, but usually baroreceptors within the aortic sinuses initiate a baroreflex, triggering angiotensin II and norepinephrine release and consequent vasoconstriction and heart rate increases to augment blood flow return.

Neurogenic and hypovolemic shock can also cause fainting. The smooth muscles surrounding the veins become slack and the veins fill with the majority of the blood in the body, keeping blood away from the brain and causing unconsciousness. Jet pilots wear pressurized suits to help maintain their venous return and blood pressure, since high-speed maneuvers increase venous pooling in the legs. Pressure suits specifically squeeze the lower extremities, increasing venous return to the heart. This ensures that end diastolic volumes are maintained and that the brain will receive adequate blood, preventing loss of consciousness.

How to take your blood pressure2.docx