Anatomy of the Eye

Many structures in the human eye, such as the cornea and fovea, process light so it can be deciphered by rods and cones in the retina.

Explain how eyes have evolved to benefit organisms

Anatomy of the Eye

The retina, a thin layer of cells located on the inner surface of the back of the eye, consists of photoreceptive cells, which are responsible for the transduction of light into nervous impulses. However, light does not enter the retina unaltered; it must first pass through other layers that process it so that it can be interpreted by the retina. 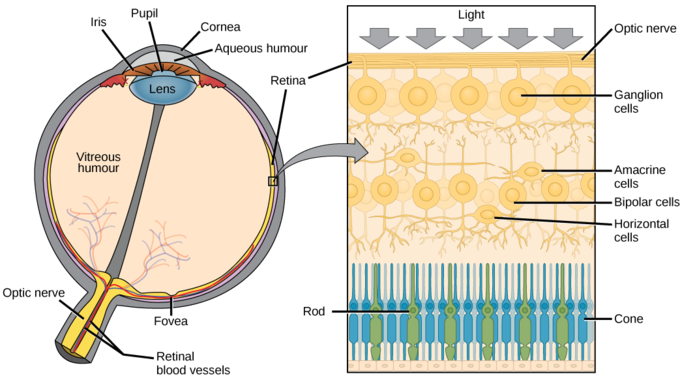 Retina: (a) The human eye is shown in cross section. The human eye contains structures, such as the cornea, iris, lens, and fovea, that process light so it can be deciphered by the retina. Other structures like the aqueous humor and the vitreous humor help maintain the shape of the eye. (b) A blowup shows the layers of the retina. The retina contains photoreceptive cells. In the retina, light is converted into neural signals sent to the brain.

The cornea, the front transparent layer of the eye, along with the crystalline lens, refract (bend) light to focus the image on the retina. After passing through the cornea, light passes through the aqueous humour, which connects the cornea to the lens. This clear gelatinous mass also provides the corneal epithelium with nutrients and helps maintain the convex shape of the cornea. The iris, which is visible as the colored part of the eye, is a circular muscular ring lying between the lens and the aqueous humour that regulates the amount of light entering the eye. Light passes through the center of the iris, the pupil, which actively adjusts its size to maintain a constant level of light entering the eye. In conditions of high ambient light, the iris contracts, reducing the size of the pupil. In conditions of low light, the iris relaxes and the pupil enlarges.

The main function of the lens is to focus light on the retina and fovea centralis. The lens is a transparent, convex structure located behind the cornea. On the other side of the lens is the vitreous humour, which lets light through without refraction, maintains the shape of the eye, and suspends the delicate lens. The lens focuses and re-focuses light as the eye rests on near and far objects in the visual field. The lens is operated by muscles that stretch it flat or allow it to thicken, changing the focal length of light coming through to focus it sharply on the retina. With age comes the loss of the flexibility of the lens; a form of farsightedness called presbyopia results. Presbyopia occurs because the image focuses behind the retina. It is a deficit similar to a different type of farsightedness, hyperopia, caused by an eyeball that is too short. For both defects, images in the distance are clear, but images nearby are blurry. Myopia (nearsightedness) occurs when an eyeball is elongated and the image focus falls in front of the retina. In this case, images in the distance are blurry, but images nearby are clear.

There are two types of photoreceptors in the retina: rods and cones. Both are named for their general appearance. Rods, strongly photosensitive, are located in the outer edges of the retina. They detect dim light and are used primarily for peripheral and nighttime vision. Cones, weakly photosensitive, are located near the center of the retina. They respond to bright light; their primary role is in daytime, color vision. 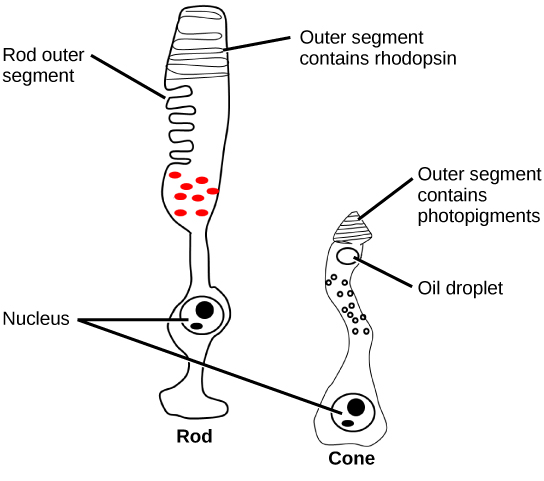 The fovea is the region in the center back of the eye that is responsible for acute (central) vision. The fovea has a high density of cones. When you bring your gaze to an object to examine it intently in bright light, the eyes orient so that the object's image falls on the fovea. However, when looking at a star in the night sky or other object in dim light, the object can be better viewed by the peripheral vision because it is the rods at the edges of the retina, rather than the cones at the center, that operate better in low light. In humans, cones far outnumber rods in the fovea.

Light is tranduced in rods and cones; visual information is processed in the retina before entering the brain.

Explain retinal processing and the process of transduction of light

The rods and cones are the site of transduction of light into a neural signal. Both rods and cones contain photopigments, which are pigments that undergo a chemical change when they absorb light. In vertebrates, the main photopigment, rhodopsin, has two main parts: an opsin, which is a membrane protein (in the form of a cluster of α-helices that span the membrane); and retinal, a molecule that absorbs light. When light hits a photoreceptor, it causes a shape change in the retinal, altering its structure from a bent (cis) form of the molecule to its linear (trans) isomer. This isomerization of retinal activates the rhodopsin, starting a cascade of events that ends with the closing of Na+ channels in the membrane of the photoreceptor. Thus, unlike most other sensory neurons (which become depolarized by exposure to a stimulus), visual receptors become hyperpolarized and are driven away from the threshold. 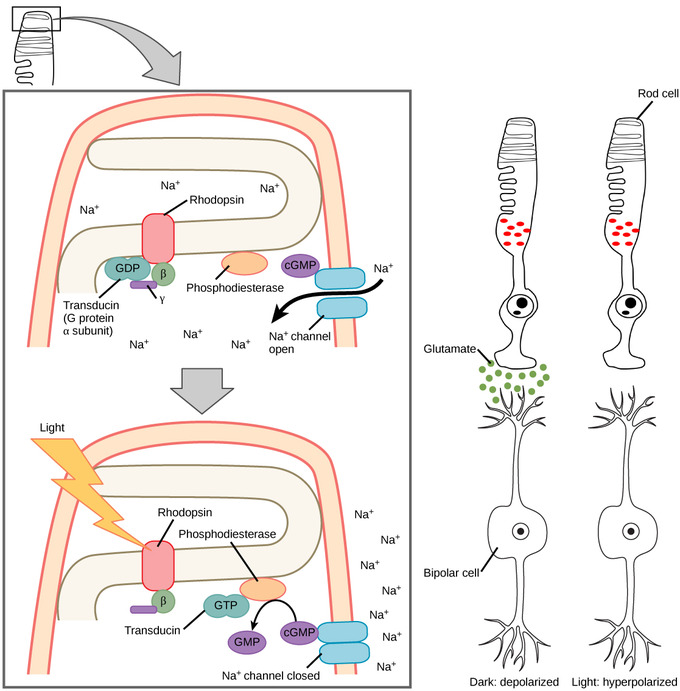 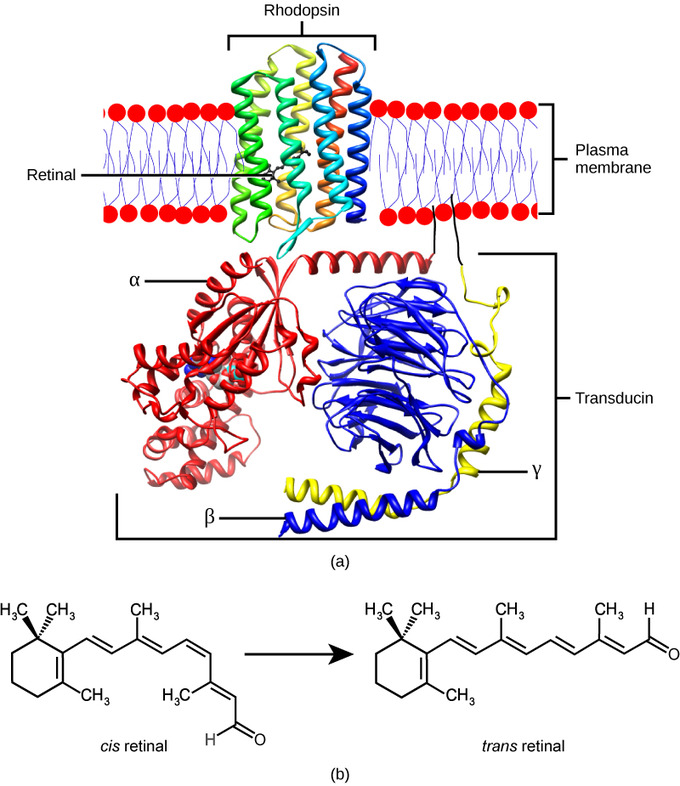 Rhodopsin: (a) Rhodopsin, the photoreceptor in vertebrates, has two parts: the trans-membrane protein opsin and retinal. When light strikes the retinal, it changes shape from (b) a cis to a trans form. The signal is passed to a G-protein called transducin, triggering a series of downstream events.

There are three types of cones (with different photopsins) that differ in the wavelength to which they are most responsive. Some cones are maximally responsive to short light waves of 420 nm; they are called S cones ("S" for "short"). Other cones (M cones, for "medium") respond maximally to waves of 530 nm. A third group (L cones, or "long" cones) responds maximally to light of longer wavelengths at 560 nm. With only one type of cone, color vision would not be possible; a two-cone (dichromatic) system has limitations. Primates use a three-cone (trichromatic) system, resulting in full color vision. 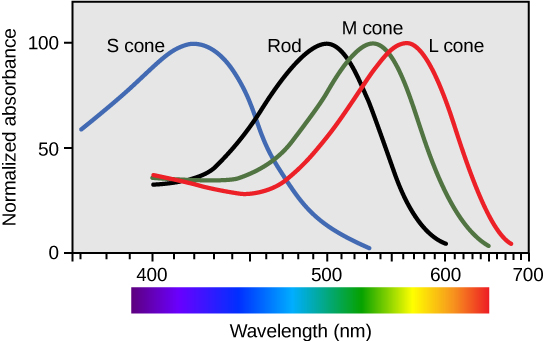 Rod and cone cells: Human rod cells and the different types of cone cells each have an optimal wavelength. However, there is considerable overlap in the wavelengths of light detected.

The color we perceive is a result of the ratio of activity of our three types of cones. The colors of the visual spectrum, running from long-wavelength light to short are:

Humans have very sensitive perception of color and can distinguish about 500 levels of brightness, 200 different hues, and 20 steps of saturation; in all, about 2 million distinct colors.

Photoreceptors in the retina continuously undergo tonic activity. That is, they are always slightly active even when not stimulated by light. In neurons that exhibit tonic activity, the absence of stimuli maintains a firing rate at an equilibrium; while some stimuli increase firing rate from the baseline, other stimuli decrease firing rate. In the absence of light, the bipolar neurons that connect rods and cones to ganglion cells are continuously and actively inhibited by the rods and cones. Exposure of the retina to light hyperpolarizes the rods and cones, removing the inhibition of their bipolar cells. The now-active bipolar cells in turn stimulate the ganglion cells, which send action potentials along their axons (which leave the eye as the optic nerve). Thus, the visual system relies on changein retinal activity, rather than the absence or presence of activity, to encode visual signals for the brain. Sometimes horizontal cells carry signals from one rod or cone to other photoreceptors and to several bipolar cells. When a rod or cone stimulates a horizontal cell, the horizontal cell inhibits more-distant photoreceptors and bipolar cells, creating lateral inhibition. This inhibition sharpens edges and enhances contrast in the images by making regions receiving light appear lighter and dark surroundings appear darker. Amacrine cells can distribute information from one bipolar cell to many ganglion cells.

Visual signals are processed in the brain through several different pathways.

Describe the complexity of visual processing in the brain

The myelinated axons of ganglion cells make up the optic nerves. Within the nerves, different axons carry different parts of the visual signal. Some axons constitute the magnocellular (big cell) pathway, which carries information about form, movement, depth, and differences in brightness. Other axons constitute the parvocellular (small cell) pathway, which carries information on color and fine detail. Some visual information projects directly back into the brain, while other information crosses to the opposite side of the brain. This crossing of optical pathways produces the distinctive optic chiasma (Greek, for "crossing") found at the base of the brain and allows us to coordinate information from both eyes.

Once in the brain, visual information is processed in several places. Its routes reflect the complexity and importance of visual information to humans and other animals. One route takes the signals to the thalamus, which serves as the routing station for all incoming sensory impulses except smell. In the thalamus, the magnocellular and parvocellular distinctions remain intact; there are different layers of the thalamus dedicated to each. When visual signals leave the thalamus, they travel to the primary visual cortex at the rear of the brain. From the visual cortex, the visual signals travel in two directions. One stream that projects to the parietal lobe, in the side of the brain, carries magnocellular ("where") information. A second stream projects to the temporal lobe and carries both magnocellular ("where") and parvocellular ("what") information.

Another important visual route is a pathway from the retina to the superior colliculus in the midbrain, where eye movements are coordinated and integrated with auditory information. Finally, there is the pathway from the retina to the suprachiasmatic nucleus (SCN) of the hypothalamus. The SCN is a cluster of cells that is considered to be the body's internal clock, which controls our circadian (day-long) cycle. The SCN sends information to the pineal gland, which is important in sleep/wake patterns and annual cycles. 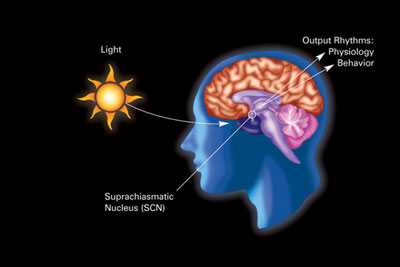 The suprachiasmatic nucleus (SNC): The presence of light and darkness influences circadian rhythms and related physiology and behavior through the SCN.