European and American Art in the 18th and 19th Centuries

Beaux-Arts architecture expressed the academic neoclassical architectural style that was taught at the École des Beaux-Arts in Paris.

Define the characteristics of "Beaux Arts" in France

Beaux-Arts academic training emphasized the mainstream examples of Imperial Roman architecture, Italian Renaissance, and French and Italian Baroque models. Beaux-Arts training made great use of agrafes (clasps that link one architectural detail to another), interpenetration of forms, and "speaking architecture" (architecture parlante) in which supposed appropriateness of symbolism could be taken to literal-minded extremes. Beaux-Arts training also emphasized the production of quick conceptual sketches, highly-finished perspective presentation drawings, close attention to the program, and knowledgeable detailing. Site considerations tended toward social and urbane contexts. All architects-in-training passed through the obligatory stages—studying antique models, constructing analos, analyses reproducing Greek or Roman models, "pocket" studies and other conventional steps—in the long competition for the few desirable places at the Académie de France à Rome. 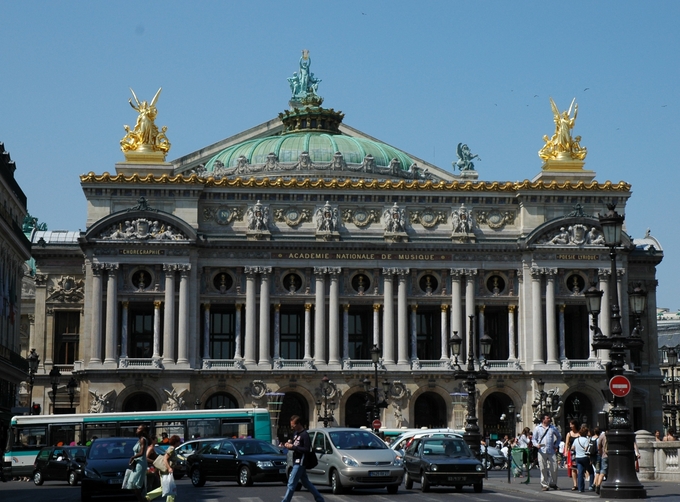 Opera Garnier: The Palais Garnier (1861-75) is an exemplar of the Beaux Arts style.

Though the Beaux-Arts style embodies an approach to a regenerated spirit within the grand traditions rather than a set of motifs, principal characteristics of Beaux-Arts architecture included: rusticated and raised first stories, a hierarchy of spaces (from "noble spaces"—grand entrances and staircases— to utilitarian ones) arched windows, arched and pedimented doors, classical details, references to a synthesis of historicist styles, and tendency to eclecticism. Statuary, sculpture (including bas-relief panels, figural sculptures, sculptural groups), murals, mosaics, and other artwork, all coordinated in theme to assert the identity of the building in Beaux-Arts architecture. After centuries of dominating architectural schools and training processes, the Beaux-Arts style began fade in favor of Modernist architecture and the International Style on the eve of World War I. 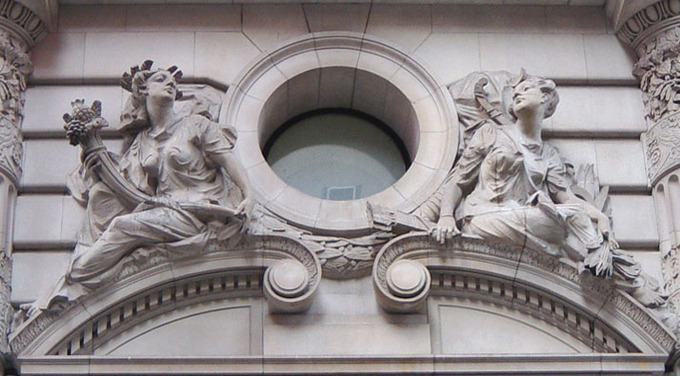 Diana and Pomona: Images of the Goddesses Pomona (left) and Diana (right) together decorate the entrance to The Peninsula Hotel, occupying a Beaux-Arts building at Fifth Ave. and 55th St., New York City. Here, Pomona (Goddess of Orchards) carries a cornucopia; in other images she is represented carrying a platter of fruit. Diana, as Goddess of the Hunt, carries her usual bow and arrows. Note the naturalism of the postures and the channeled rustication of the stonework.

Academic art is a style of painting and sculpture produced under the influence of European academies of art.


Academic art is a style of painting and sculpture produced under the influence of European academies of art; more specifically, it is the art and artists influenced by the standards of the French Académie des Beaux-Arts, which practiced under the movements of Neoclassicism and Romanticism. In this context it is often called academism, academicism, L'art pompier, and eclecticism, and sometimes linked with historicism and syncretism.

The trend in academic art was towards greater idealism: contrary to realism, figures were made simpler and more abstract—idealized—in order to represent the ideals they stood in for. Hence, many paintings by academic artists are simple nature allegories with titles like Dawn, Dusk, Seeing, and Tasting, where these ideas are personified by a single nude figure, composed in such a way as to bring out the essence of the idea. This would involve both generalizing forms seen in nature, and subordinating them to the unity and theme of the artwork.

Because history and mythology were considered fertile ground for important allegory, using themes from these subjects was considered the most serious form of painting. A hierarchy of genres, originally created in the 17th century, was valued, where history painting —classical, religious, mythological, literary, and allegorical subjects—was placed at the top. Next came genre painting, then portraiture, still-life, and finally landscape. History painting was also known as the "grande genre." During the reign of academic art, the paintings of the Rococo era that had previously been held in low favor were revived to popularity, and themes often used in Rococo art such as Eros and Psyche were popular again. The academic art world also idolized Raphael for the ideality of his work. 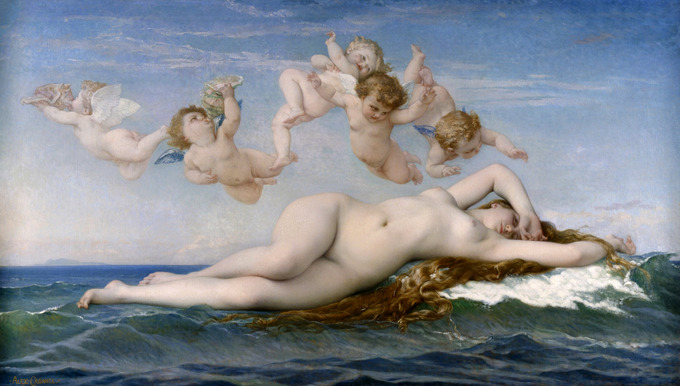 Academic Art exhibitions were held often. The most popular exhibition was the Paris Salon, and beginning in 1903, the Salon d'Automne. These salons were sensational events that attracted crowds of visitors, both native and foreign. As much a social affair as an artistic one, 50,000 people might visit on a single Sunday, and as many as 500,000 could see the exhibition during its two-month run. Thousands of pictures were displayed, hung from just below eye level all the way up to the ceiling in a manner now known as "Salon style." A successful showing at the salon was a seal of approval for an artist, making his work saleable to the growing ranks of private collectors.

Academic art was first criticized by realist artists for its use of idealism: based on idealistic clichés and representing mythical and legendary motives while contemporary social concerns were being ignored. Another criticism by realists was the "false surface" of paintings: the objects depicted looked smooth, slick, and idealized, showing no real texture. Similarly, perspective was constructed geometrically on a flat surface and was not really the product of sight. 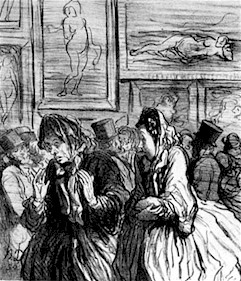 This Year, Venuses Again...Always Venuses!: Honoré Daumier, No. 2 from series in Le Charivati, 1864. A caricature (French bourgeoisie) mocking Academic Art's use of idealized form and mythical allegories, while ignoring contexts of daily or modern life.

Which of the following is true about academic art.docx

BUSINESS BUS 3305 •  University of the People