Art of South and Southeast Asia Before 1200 CE

The art of Java is the result of a complex cultural mixture that is very different from the original indigenous cultures.

Introduction: The Culture of Java

The culture of the Javanese ethnic group in Indonesia is entered in the Central Java, Yogyakarta, and East Java provinces. Due to various migrations, it can also be found in other parts of the world, such as Suriname (where 15% of the population are of Javanese descent), the broader Indonesian archipelago region, Cape Malay, Malaysia, Singapore, Netherlands, and other countries.

The culture of Java has been shaped by its long interactions between original indigenous customs and multiple foreign influences. Indonesia is centrally located along ancient trading routes between the Far East and the Middle East; as a result, many cultural practices are strongly influenced by a multitude of local religions. These include Hinduism , Buddhism , Confucianism , Islam , and Christianity, all of which are strong in the major trading cities. The result is a complex cultural mixture that is very different from the original indigenous cultures.

In the central Javanese court cities of Yogyakarta and Surakarta, contemporary kings trace their lineages back to the pre-colonial Islamic kingdoms that ruled the region, making those places especially strong repositories of classical Javanese culture. The classic arts of Java include wayang puppet shows, gamelan music, and the martial art silat.

Performances of shadow puppet theatre are accompanied by a gamelan orchestra in Java (a musical ensemble made up of mostly percussion instruments). 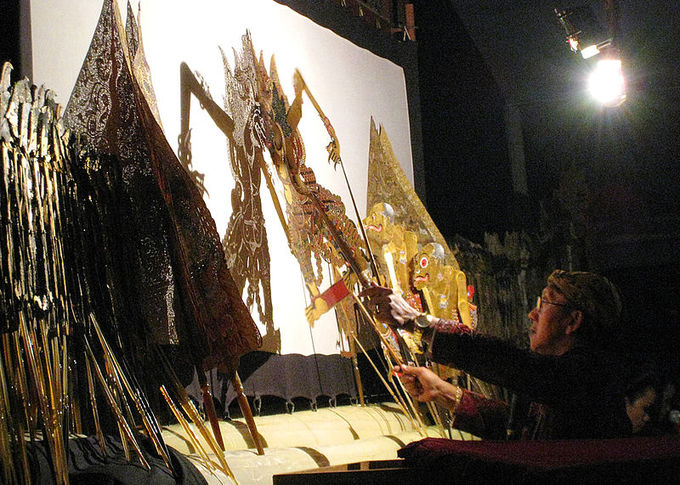 Wayang kulit, or shadow puppets, are without a doubt the best known of the Indonesian wayang. Kulit means skin and refers to the leather construction of the puppets that are carefully chiseled with very fine tools and supported with carefully shaped buffalo horn handles and control rods. The handwork involved in making a wayang kulit figure that is suitable for a performance takes several weeks, with the artists working together in groups.

The stories are usually drawn from the Hindu epics, such as the Ramayana or the Mahabharata, or from the Serat Menak (a story about the heroism of Amir Hamza). Historically, the performance consisted of shadows cast on a cotton screen and an oil lamp. Today, the source of light used in wayang performance in Java is most often a halogen electric light.

A gamelan is a traditional musical ensemble from Indonesia, typically from the islands of Java and Bali, that features a variety of instruments such as metallophones, xylophones, kendang (drums), gongs, bamboo flutes, and bowed and plucked strings. Vocalists may also be included. 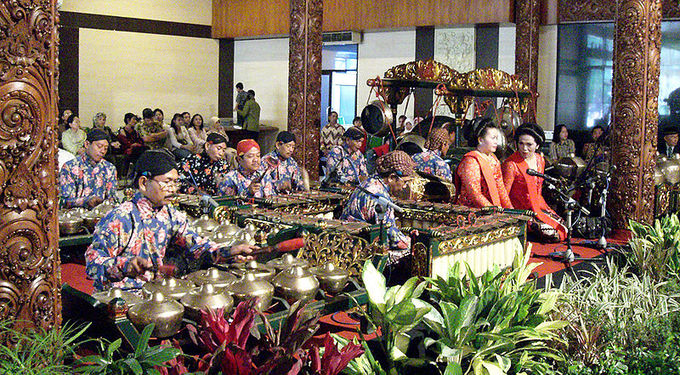 In Javanese mythology, the gamelan was created by Sang Hyang Guru in the Saka era 167 (c. CE 230). He is considered the god who ruled as king of all Java from a palace on the Maendra mountain in Medang Kamulan (now Mount Lawu). He needed a signal to summon the gods and thus invented the gong. For more complex messages, he invented two other gongs, thus forming the original gamelan set.

Variations of gamelan ensembles are distinguished by their collection of instruments and their use of voice, tunings, repertoire, style , and cultural context. In general, no two gamelan ensembles are the same, and those that arose in prestigious courts are often considered to have their own style. Certain styles may also be shared by nearby ensembles, leading to a regional style.

Silat is a class of indigenous martial arts from the area of Southeast Asia encompassing most of the Nusantara, the Indonesian Archipelago, the Malay Archipelago, and the entirety of the Malay Peninsula. The art of silat was created and first developed in the islands of Java and Sumatra. It is an art for survival shaped by centuries of tribal wars in Indonesian history.

Silat was used to determine rank and social position in old Indonesian kingdoms; it was also used by Indonesian freedom fighters during their struggle against Dutch colonists. Unfortunately, after Indonesia achieved its independence, silat became less popular among Indonesian youth compared to foreign martial arts like karate and tae kwon do. 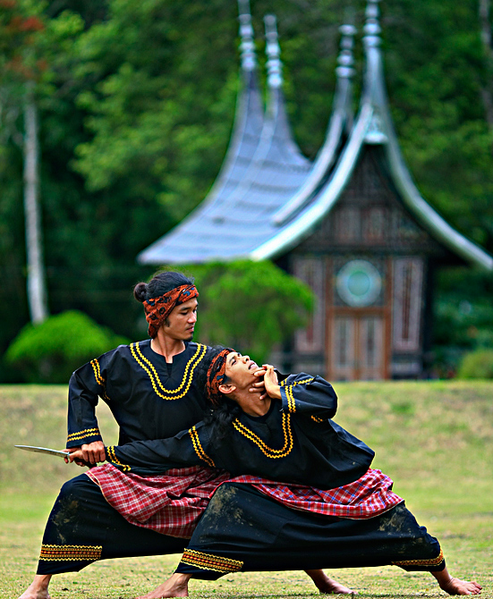 For the Javanese, blacksmiths are traditionally valued. Javanese blacksmiths provide a range of tools, such as farming equipment and fire-arms, and cultural items, such as gamelan instruments.

The kris is an asymmetrical dagger with a distinctive blade pattern achieved through alternating laminations of iron and nickelous iron; many heirloom kris made by master blacksmiths in Java hold significant historical value . The Javanese art of wood carving is traditionally applied to various cultural attributes such as statues, wayang dolls, and masks. 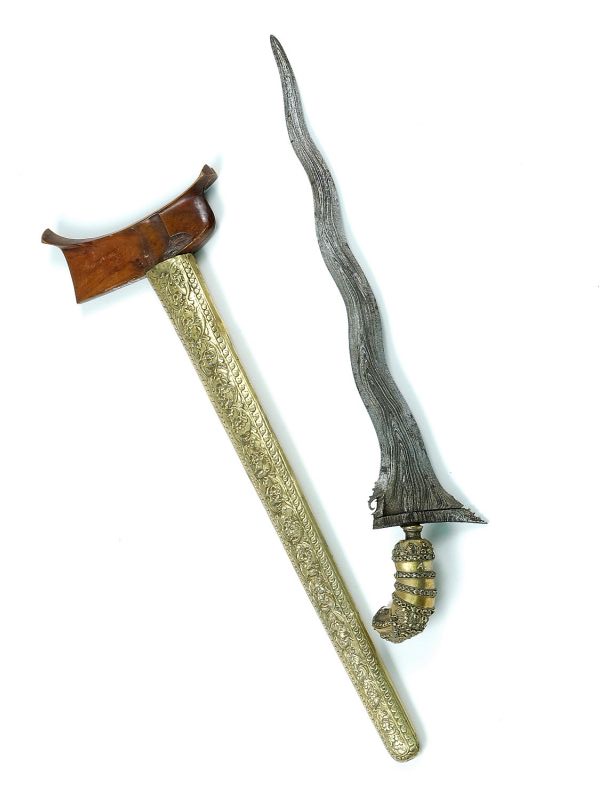 Kris and other weapons: The kris is an asymmetrical dagger noted for its distinctive wavy blade patterning.

Throughout their long history, the Javanese have produced many important buildings, ranging from Hindu monuments, Buddhist stupa , mortuary temples, palace complexes, and mosques . The paragon of religious monuments are the Hindu temple of Prambanan and the Buddhist temple of Borobudur, both were built in the 9th century near the city of Yogyakarta.

An example of secular architecture can be seen in ruins of the former capital city of the Majapahit Kingdom (which ruled from the 14th to 16th century CE) in Trowulan, East Java. The complex consists of various brick buildings, purification pools, temples, and iconic split gates.

Traditional Javanese buildings can be identified by their trapezoidal roofs that are supported by wooden pillars. Another common feature in Javanese buildings is the pendopo, a pavilion with open sides and four large pillars. The pillars and other parts of the buildings are often richly carved.

Traditional mosques in Java maintain a distinctive Javanese style with both the pendopo and a trapezoidal roof, rather than the more typical dome and minarets . The roofs are often multitiered and tiled. The split gate from an earlier Hindu-Buddhist period is still used in many mosques and public buildings in Java. Some notable examples of mosques that use traditional Javanese architecture include the mosques at Agung Demak, Menara Kudus, and Banten.

Throughout Cambodia's long history, religion has been a major source of cultural inspiration for art, dance, and music.

Describe the Hindu and Buddhist influences on Cambodian dance and music

Throughout Cambodia's long history, religion has been a major source of cultural inspiration. Over nearly two thousand years, Cambodians have developed a unique Khmer belief from the syncreticism of indigenous animistic beliefs and the Indian religions of Buddhism and Hinduism.

Indian culture and civilization , including its languages and arts, reached mainland Southeast Asia around the first century CE; it is generally believed that seafaring merchants brought Indian customs and culture to the ports along the Gulf of Thailand and the Pacific en route to trade with China. The Kingdom of Funan was most probably the first Khmer state to benefit from this influx of Indian ideas.

The history of Cambodian art stretches back centuries to ancient times, but the most famous period is undoubtedly the Khmer art of the Khmer Empire (802–1431). The 12th century temple complex of Angkor Wat, located amidst other sites in the area around Angkor, it perhaps the most famous example of Cambodian architecture. After the collapse of the Khmer Empire, this and other sites were abandoned and overgrown, allowing much of the era's stone carving and architecture to survive to the present day.

Angkor Wat was originally constructed as a Hindu temple of the god Vishnu for the Khmer Empire, and gradually transformed into a Buddhist temple toward the end of the 12th century. The temple combines the two basic plans of Khmer temple architecture: the temple-mountain and the later galleried temple.

It is designed to represent Mount Meru, home of the devas in Hindu mythology. There are three rectangular galleries, each raised above the next, within a moat and an outer wall 2.2 miles long. At the center of the temple stands a group of towers.

Unlike most Angkorian temples, Angkor Wat is oriented to the west; scholars are divided as to the significance of this. The temple is admired for the grandeur and harmony of its architecture, its extensive bas-reliefs , and the numerous devatas, or Hindu deities , adorning its walls. 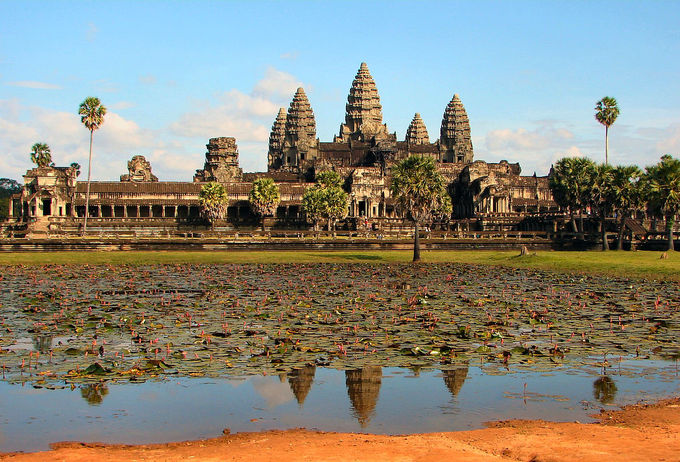 Angkor Wat: A frontal view of the main complex of Angkor Wat.

In pre-colonial Cambodia, arts and crafts were generally produced either by rural non-specialists for practical use or by skilled artists producing works for the Royal Palace. Cambodia's best-known stone carving adorns the temples of Angkor.

Silk weaving has a long history—the practice dates back as early as the 1st century, and  textiles were often used in trade during Angkorian times. Many Cambodian farmers would weave baskets out of thinly cut bamboo for household use or to sell as a supplemental source of income.

The height of Cambodian traditional lacquerware was between the 12th and 16th centuries; some examples of work from this era, including gilded Buddha images and betel boxes, have survived to the present day.

Silversmithing in Cambodia also dates back centuries, and the Royal Palace traditionally patronized silversmiths' workshops. Silver was made into a variety of items, including weaponry, coins, ceremonial objects used in funerary and religious rituals , and betel boxes. During Cambodia's colonial period, artisans at the School of Fine Art produced celebrated silverwork, and by the late 1930s there were more than 600 silversmiths.

Cambodian pottery traditions date to 5000 BCE. Ceramics were mostly used for domestic purposes, such as holding food and water, and for figures such as birds, elephants, rabbits, and other animals that were popular between the 11th and 13th centuries.

Cambodia's kite-making and kite-flying tradition, which dates back many centuries, was revived in the early 1990s and is now extremely popular throughout the country. Kites are generally flown at night during the northeast monsoon season; a bow attached to the kites resonates in the wind, producing a musical sound.

Beginning in the mid-20th century, a tradition of modern art began in Cambodia, though in the later 20th century both traditional and modern arts declined for several reasons, including the killing of artists by the brutal Khmer Rouge regime. The country has experienced a recent artistic revival due to increased support from governments, NGOs, and foreign tourists.

Cambodia's premiere performing art form is the Khmer classical dance, or Robam Preah Reach Trop. It is a highly stylized dance form originating from the royal courts. Performances of classical dance consist of elaborately costumed dancers and music played by a pinpeat ensemble . It is performed for invocation of deities and spirits as well as to pay homage to royalty and guests. 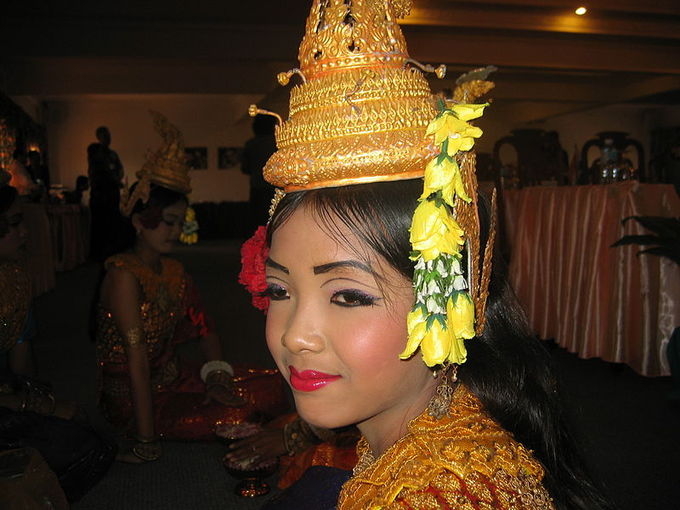 In the mid-20th century, it was introduced to the general public and became widely celebrated as iconic of Cambodian culture. It was often performed during public events, holidays, and for tourists visiting Cambodia. Two of the most performed classical dances are the Robam Chun Por (Wishing dance) and the Robam Tep Apsara (Apsara dance).

Modern music in Cambodia is derived from traditions that date back to the ancient Khmer Empire and from the rapid Westernization of its popular music scene in modern times.

In the Siem Reap province, a form of music called kantrum has become popular; it originated among the Khmer Surin in Thailand. Kantrum is famous for Thai and Cambodian stars like Darkie.

Cambodian Art music is highly influenced by its ancient forms as well as Hindu forms. Religious dances, many of which depict stories and ancient myths, are common. 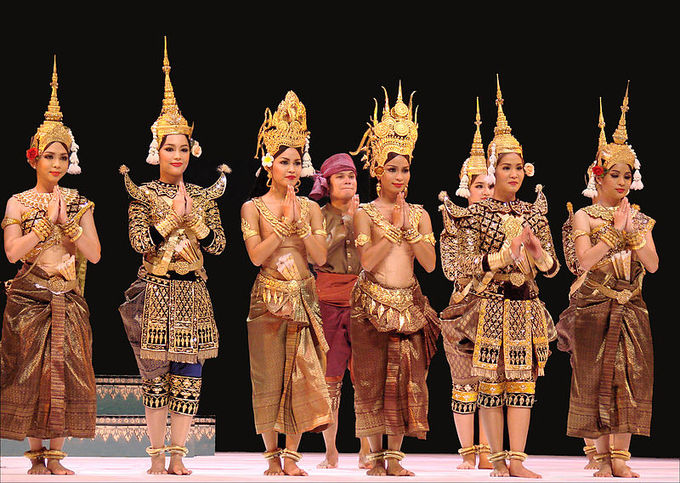