Chinese and Korean Art Before 1279 CE

Ceramics and Bronze in the Shang Dynasty

The artwork of the Shang dynasty, notably bronze pieces, has been discovered through archaeological excavations.

The Shang Dynasty, also known as the Yin Dynasty according to traditional historiography, ruled in the Yellow River valley in the second millennium BCE. The Shang are estimated to have succeeded the previous Xia Dynasty from circa 1766-1556 BCE and ruled until the following Zhou Dynasty circa 1122-1046 BCE.

Artifacts from the Shang Dynasty

The artwork of the Shang Dynasty has been discovered through numerous archaeological digs. In particular, excavation work at the Ruins of Yin, identified as the last Shang capital , uncovered eleven major Yin royal tombs and the foundations of palaces and ritual sites containing weapons of war and the remains from animal and human sacrifices . Tens of thousands of bronze, jade, stone, bone, and ceramic artifacts have been obtained. The workmanship on the bronze attests to a high level of civilization .

Many Shang royal tombs were ravaged by grave robbers in ancient times; however, in the spring of 1976, the discovery of Tomb 5 at Yinxu revealed a tomb that was not only undisturbed, but one of the most richly furnished Shang tombs ever discovered. With more than 200 bronze ritual vessels and 109 inscriptions of Lady Fu Hao's name, archaeologists realized they had stumbled across the tomb of the militant consort to King Wu Ding, as described in 170 to 180 Shang oracle bones . Bronze vessels, stoneware and pottery vessels, bronze weapons, jade figures, hair combs, and bone hairpins were found. 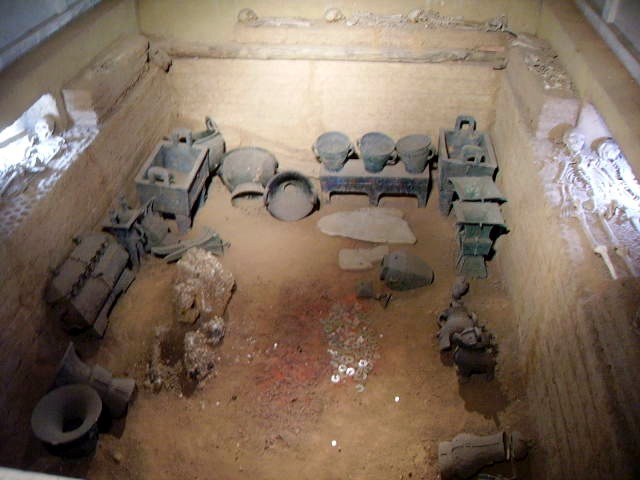 Tomb of Fu Hao: With more than 200 bronze ritual vessels and 109 inscriptions of Lady Fu Hao's name, archaeologists realized they had stumbled across the tomb of the militant consort to King Wu Ding, as described in 170 to 180 Shang oracle bones.

Chinese bronze casting and pottery greatly advanced during the Shang dynasty, with bronze often used for art as well as for weapons. Shang-era ceramics grew more detailed during this era as technical skill advanced, though they did not yet reach the skill of the following Han Dynasty. Various excavations have yielded pottery fragments containing short sequences of symbols, suggesting early forms of writing that differed across regions. The Shang had a fully developed system of writing preserved on bronze inscriptions and a small number of writings on pottery, jade, horn, and oracle bones. 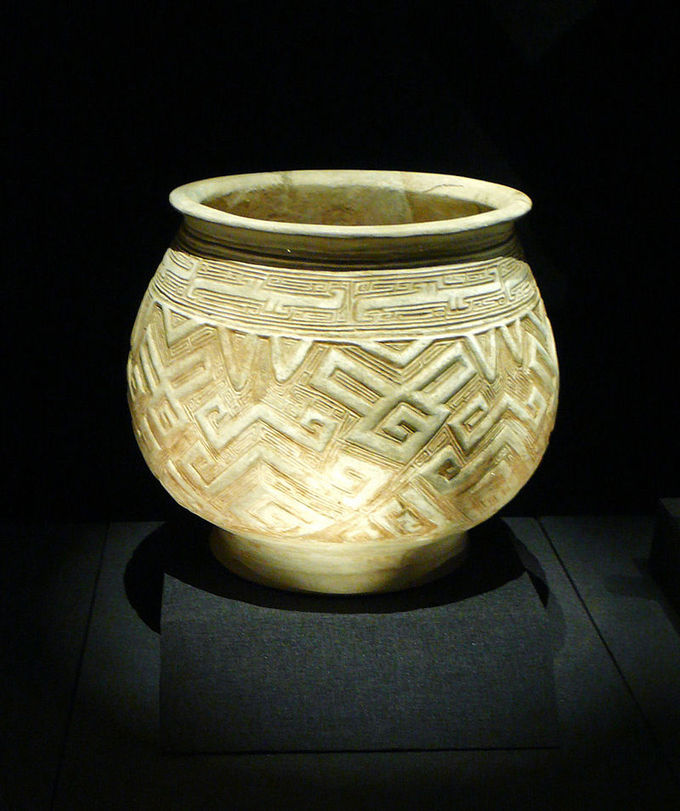 As far back as circa 1500 BCE, the early Shang Dynasty engaged in large-scale production of bronzeware vessels and weapons. This required a large labor force that could handle the mining, refining, and transportation of the necessary copper, tin, and lead ores, as well as official managers to oversee both hard laborers and skilled artisans.

The Shang royal court and aristocrats required a vast amount of bronze vessels for various ceremonial purposes and events of religious divination. Official rules even decreed how many bronze containers of each type a nobleman or noblewoman of a certain rank could own. Bronze was also used for the fittings of spoke-wheeled chariots, which appeared in China around 1200 BCE. 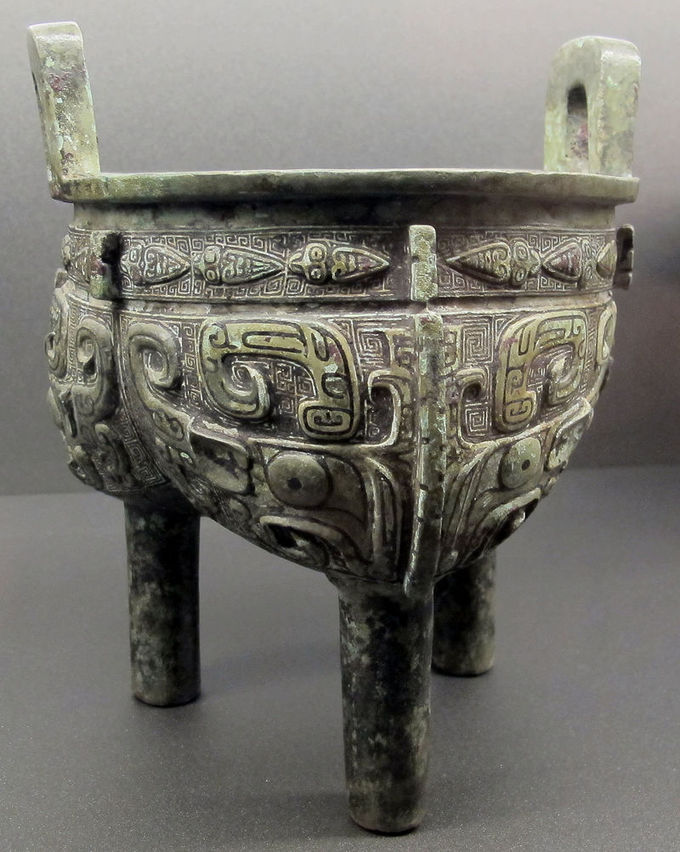 With the increased amount of bronze available, the army could also better equip itself with an assortment of bronze weaponry. Bronze and stones weapons were an integral part of Shang society, and Shang infantry were armed with máo (矛) spears, yuè (鉞) pole-axes, gē (戈) pole-based dagger-axes, composite bows, and bronze or leather helmets. 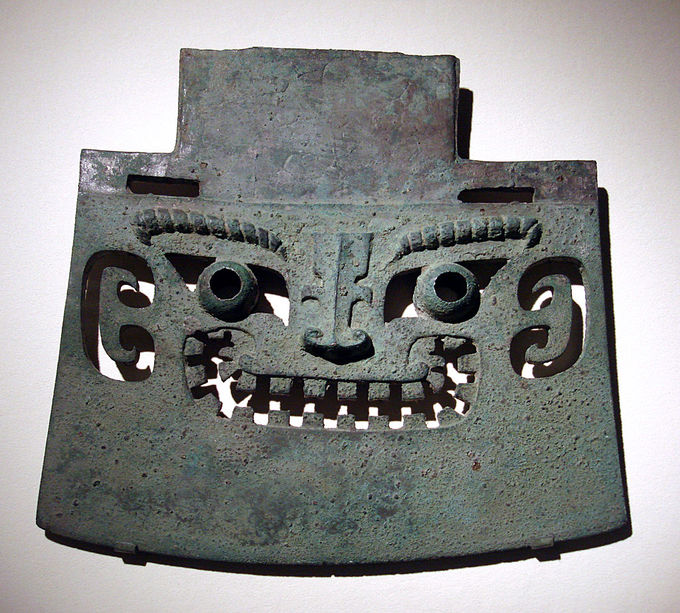 A bronze axe of the Shang dynasty: Bronze weapons were an integral part of Shang society, and Shang infantry were armed with a variety of stone and bronze weaponry.

Bronze under the Zhou Dynasty

The art of the Zhou Dynasty was characterized by the introduction of iron and the refinement of elaborate bronzework.

Discuss the advancements and cultural adaptations of the Zhou Dynasty, including bronze and ironware


The Zhou Dynasty (1046–256 BCE) was a Chinese dynasty that followed the Shang Dynasty and preceded the Qin Dynasty. Although the Zhou Dynasty lasted longer than any other dynasty in Chinese history, the actual political and military control of China by the Ji family lasted only until 771 BCE, a period known as the Western Zhou. Though iron was introduced to China during the Zhou Dynasty, this period of produced what many consider the zenith of Chinese bronzeware.

The archaeological record suggests that the Zhou were cultural opportunists. They were quick to adopt the material culture of the Shang, perhaps as a way of establishing their legitimacy. Zhou art also borrowed heavily from the Shang, illustrated by the casting of inscriptions in bronze vessels and the design of the vessels themselves.

Many large bronzes bear cast inscriptions. These comprise the bulk of surviving early Chinese writing and have helped historians and archaeologists piece together the history of China, especially during the Zhou Dynasty. The bronzes of the Western Zhou Dynasty document large portions of history not found in the surviving texts of the time, and the medium of cast bronze lends the record a permanence not enjoyed by manuscripts. These inscriptions are commonly subdivided into four parts: a reference to the date and place, the naming of the event commemorated, the list of gifts given to the artisan in exchange for the bronze, and a dedication. These reference points have enabled historians to place most of the vessels within a certain time frame of the Western Zhou period and trace the evolution of the vessels and the events they record.

Uses and Types of Bronze

Chinese bronze artifacts are generally either utilitarian, such as spear points and other tools or weapons, or ceremonial/ritual, such as more elaborate versions in precious materials of everyday vessels. The majority of surviving Chinese ancient bronze artifacts are ritual forms rather than the practical equivalents. Weapons such as daggers and axes had a sacrificial meaning, symbolizing the heavenly power of the ruler. The strong religious associations of bronze objects led to a development of a great number of vessel types and shapes, which became regarded as classic and totemic and were copied in other periods of Chinese art, often in other media such as porcelain . 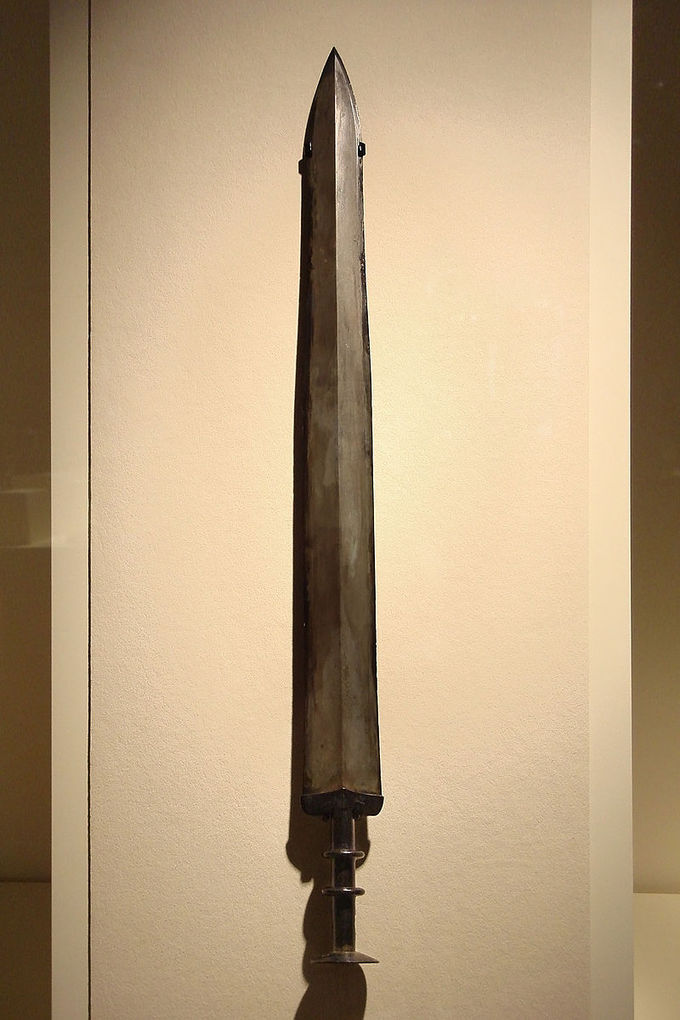 Examples of ritual bronze vessels include the numerous large sacrificial tripods known as dings and other distinct shapes such as gui and zun. Dings are prehistoric ancient Chinese cauldrons, standing upon legs with a lid and two facing handles. They are one of the most important Chinese ritual bronzes and were generally made in two shapes: round vessels with three legs and rectangular vessels with four, the latter often called fanding. They were used for cooking, storage, and ritual offerings to the gods or to ancestors. Gui are bowl-shaped ancient Chinese ritual bronze vessels used to hold offerings of food and for ancestral tombs. Zun are wine and sacrificial vessels characterized by a tall cylindrical shape with no handles or legs and a mouth slightly broader than the body. In the late Zhōu Dynasty, this type of vessel became exceedingly elaborate, often taking the shape of animals and abandoning the traditional shape. 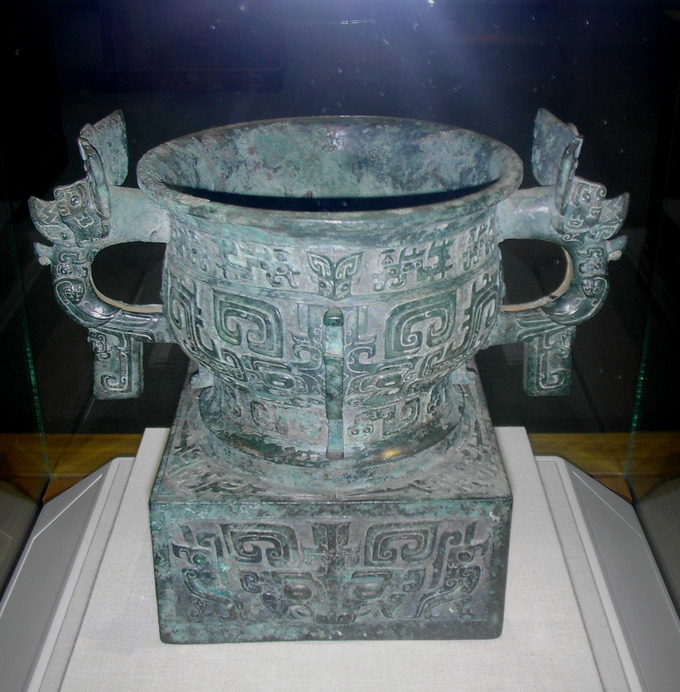 HUM 100 Week 2- A Visual Tour of Ancient Greece and Rome.docx

THE RISE AND COLLAPSE OF BRONZE AGE.docx

OUTLINE FOR AEGEAN ART OF THE BRONZE AGE

HISTORY 123 •  University of the East, Caloocan

OUTLINE FOR AEGEAN ART OF THE BRONZE AGE.pdf

OUTLINE FOR AEGEAN ART OF THE BRONZE AGE.doc

OUTLINE FOR AEGEAN ART OF THE BRONZE AGE

Anatolia in the Bronze Age

The Bronze Age in the Shang and Zhou Dynasties

Bronze Age Empires II - Trade, Migration, and the End of the Bronze Age.pptx

The Art of Bronze Age China

HISTORY 123 •  University of the East, Caloocan

Forum 1B_ The Bronze Age Collapse.pdf