European and American Art in the 18th and 19th Centuries

Neoclassicism was the dominant artistic style of the Enlightenment period and drew inspiration from the classical art and culture of Ancient Greece and Rome.

Describe the shifts in thinking and artwork that characterized the Enlightenment

The Enlightenment, also known as the Age of Reason, was a movement that began during the 18th century in Europe and the American colonies. The key figures of the movement sought to reform society using the power of reason. Started by the preeminent philosophers of the day, the Enlightenment era lasted from about 1650 to 1800, promoting science, reason, and intellectual exchange. The idea of advancing knowledge through reason emerged in response to new technology and the ability to exchange information easily thanks to mass printing, and also out of a backlash against previous systems, which valued the church and tradition above all else. The authority of science and empirical thought increasingly displaced religious authority, and the disciplines of alchemy and astrology lost credibility, leaving the more easily confirmed chemistry and astronomy. Scientific thought became more and more developed. The Enlightenment has long been hailed as the foundation of modern Western political and intellectual culture.

The Enlightenment encouraged criticism of the corruption of Louis XVI and the aristocracy in France, leading to the beginning of the French Revolution in 1789. In 1792, Louis XVI and his wife, Marie Antoinette, were beheaded along with thousands of other aristocrats believed to be loyal to the monarchy.

Art During the Enlightenment

Previous to the Enlightenment, the dominant artistic style was Rococo. When the Enlightenment and its new ideals took hold, Rococo was condemned for being immoral, indecent, and indulgent, and a new kind of instructive art was called for, which became known as Neoclassicism. In opposition to the frivolous sensuality of Rococo painters like Jean-Honoré Fragonard and François Boucher, the Neoclassicists looked to the artist Nicolas Poussin for their inspiration. Poussin's work favors line over color and predominantly features clarity, logic, and order. His work served as an alternative to the dominant Baroque style of the 17th century. Poussin was the major inspiration for such classically oriented artists as Jacques-Louis David, Jean-Auguste-Dominique Ingres, and Paul Cézanne. 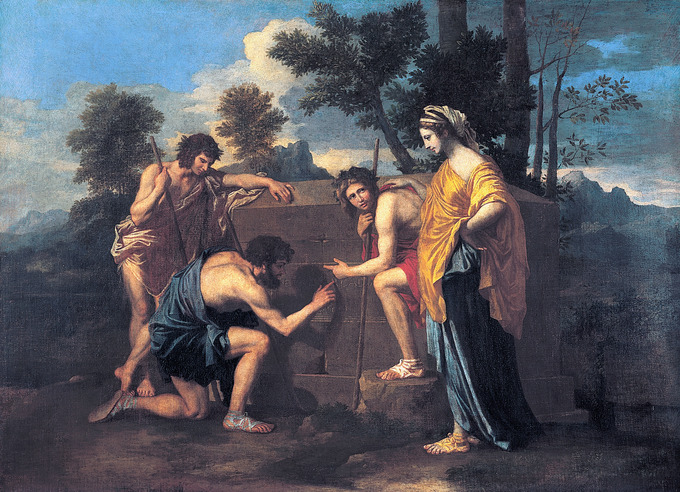 Et in Arcadia Ergo by Nicholas Poussin, c. 1630s: Poussin came to define Neoclassical artwork with work that favored line over color and a rather stark lack of frivolity.

Neoclassicism is characterized by clarity of form, sober colors, shallow space, and strong horizontals. Its verticals render the subject matter timeless, instead of temporal, as in the dynamic Baroque works, and depicts classical subject matter—or classicizes contemporary subject matter. Neoclassicists believed that strong drawing was rational, and therefore morally superior, and that art should be cerebral, not sensual.

The Neoclassicists wanted to express rationality and sobriety that was fitting for their times. Artists like David supported the rebels in the French Revolution through an art that asked for clear-headed thinking, self-sacrifice to the State (as in Oath of the Horatii), and an austerity reminiscent of Republican Rome. 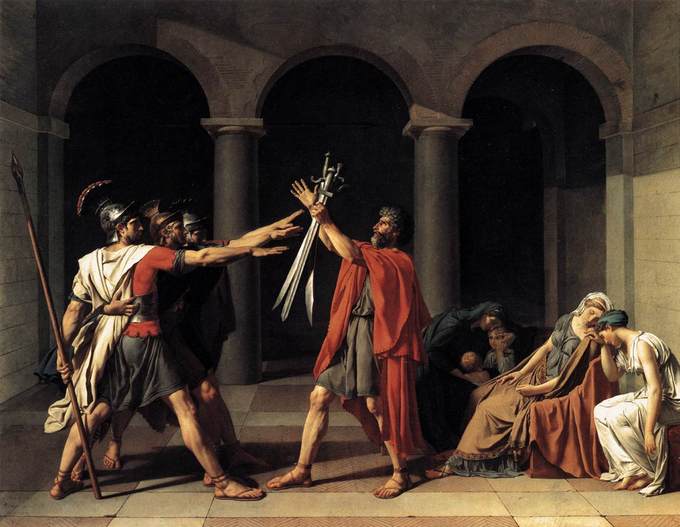 Oath of the Horatii by Jacques-Louis David, 1784: David was an extremely influential figure in the Neoclassical movement. His strong use of line, balance, and geometry suited the movement's ideals of order and austerity.

Neoclassicism was strongest in architecture, sculpture, and the decorative arts, where classical models in the same medium were relatively numerous and accessible. Rococo architecture emphasizes grace, ornamentation, and asymmetry; Neoclassical architecture is based on the principles of simplicity and symmetry, which were seen as virtues in the arts of Rome and Ancient Greece, and were more immediately drawn from 16th century Renaissance Classicism.

The Grand Tour and Its Portraits

The Grand Tour was a customary trip to Europe undertaken by wealthy Europeans and some Americans.

Describe the stops along the Grand Tour in Europe


The Grand Tour was a customary trip to Europe undertaken by wealthy Europeans and some Americans that flourished as a tradition from about 1660 to 1840. The trip was viewed as an educational rite of passage typically for young men, but sometimes women as well. It was intended as a means of cultural broadening and associated with a fairly standard itinerary. The Grand Tour tradition was extended to include the middle class when railroad and ship travel became more widespread in the second half of the 18th century.

The travel itinerary typically began in Dover, England and crossed the English Channel to Ostend or to Calais in France. From here the tourist and "bear-leader," or tutor, and possibly a troupe of servants, could rent a coach and travel to Paris. From Paris they would travel to Switzerland, then Spain, and Northern Italy. Once in Italy, the tourist would visit Turin, and might spend a few months in Florence and Venice, which was the epitome of the Grand Tour for most British tourists. From Venice they would go to Rome to study the ruins and masterpieces and possibly to the archaeological sites at Pompeii. Next was the German section of Europe, such as Vienna, Dresden, Berlin, and Potsdam, and finally to Holland and Flanders before making the trip home. The journey generally involved the study of art at museums and universities, private collections, and notable architectural sites.

The pilgrimage was popularized further by the advent of tour guides, such as Thomas Cook, which became synonymous with the Grand Tour. Grand Tourists were known to travel with an entourage that included valets, coachmen, scholarly guide and possibly a cook. Souvenirs and mementos became an important element as they could demonstrate the specifics of which location was visited and what was seen or acquired. Their popularity created an industry of sorts, and prices rose with the growth of the trend. Some Grand Tourists invited artists from home to accompany them throughout their travels, painting views specific to their personal itineraries.

Despite the political upheaval, 18th century Rome remained a desirable destination. It became an absolute necessity for people of means to spend time in Rome as part of their "Grand Tour," or educational pilgrimage. The city became a nexus for these tourists as well as the merchants and industries that resulted from their patronage.

The increasing popularity of the Grand Tour, and the related desire for visitors to collect "classical" souvenirs, quickly spread the Neoclassical style throughout Europe. It became a symbol of wealth and freedom to go on the Grand Tour and to have something to show for it displayed in your home. A popular souvenir of the Grand Tour was a portrait of the tourists themselves, often painted amidst the architecture, or famous art works of a particular European location. The artist Pompeo Batoni, made a career of painting portraits of English tourists posed among Roman antiquities. He became very popular in Rome and his portraits of the British traveling through the city were in very high demand. There are records of over 200 portraits of visiting British patrons standing amidst ruins and great works of art by Batoni. These paintings made it into numerous private collections in Britain, thus ensuring the genre's popularity in the United Kingdom. 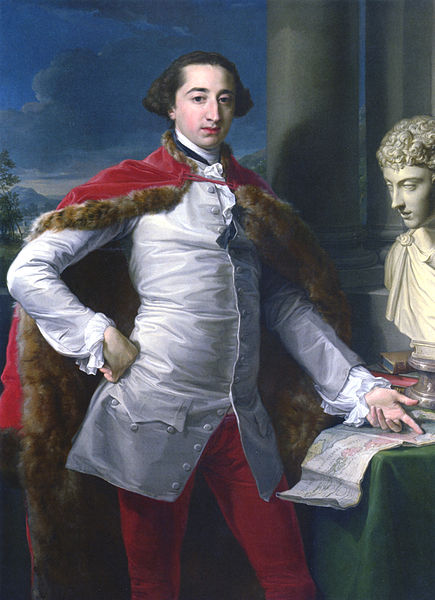 A portrait by Pompeo Batoni: A popular souvenir of the Grand Tour was a portrait of the tourists themselves, like this one, painted amidst the architecture or famous art works of a particular European location.

Enlightenment in Europe in 18th and 19th Century.docx

Week 5; ART-202; Evolution of Message_ Christian Art then and Now.pdf

Enlightenment in Europe in 18th and 19th Century.docx

Art Critics and Criticism in The Arts.docx

The Age of Enlightenment Introduction.docx

05.05 THE AGE OF ENLIGHTENMENT ASSIGNMENT.pptx

The Enlightenment and Neoclassicism Lecture Notes.docx