Create a timeline of the Paleolithic, Mesolithic, and Neolithic Periods of the Stone Age, giving a brief description of the art from each period

The Stone Age is the first of the three-age system of archaeology, which divides human technological prehistory into three periods: the Stone Age, Bronze Age, and Iron Age. The Stone Age lasted roughly 3.4 million years, from 30,000 BCE to about 3,000 BCE, and ended with the advent of metalworking.

The Stone Age has been divided into three distinct periods:

The art of the Stone Age represents the first accomplishments in human creativity, preceding the invention of writing. While numerous artifacts still exist today, the lack of writing systems from this era greatly limits our understanding of prehistoric art and culture .

The Art of the Stone Age: Paleolithic

The Paleolithic era is characterized by the emergence of basic stone tools and stone art in the archaeological record. For the first time, humans began to create durable products of self expression that served no function for survival. The diagnostic art of this period appears in two main forms: small sculptures and large paintings and engravings on cave walls. There are also various examples of carved bone and ivory flutes in the Paleolithic era, indicating another art form utilized by prehistoric humans.

Paleolithic small sculptures are made of clay, bone, ivory, or stone and consist of simple figurines depicting animals and humans. In particular, Venus figurines are the most indicative of this era. They are highly stylized depictions of women with exaggerated female parts representing fertility and sexuality. They typically date to the Gravettian period (26,000–21,000 years ago), but the earliest known Venus figurine (Venus of Hohle Fels) dates to at least 35,000 years ago, and the most recent (Venus of Monruz) dates to roughly 11,000 years ago. They are most common in the Mediterranean region, but there are examples from as far as Siberia. Archaeologists can only speculate on their meaning, but their ubiquitous nature indicates a universal human attraction to art and possibly religion. 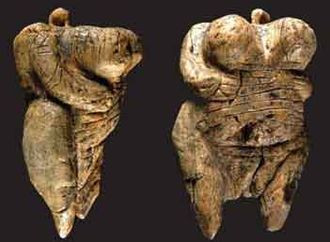 Venus of Hohle Fels: Oldest known Venus figurine. Also the oldest known, undisputed depiction of a human being in prehistoric art. Made of mammoth tusk and found in Germany. 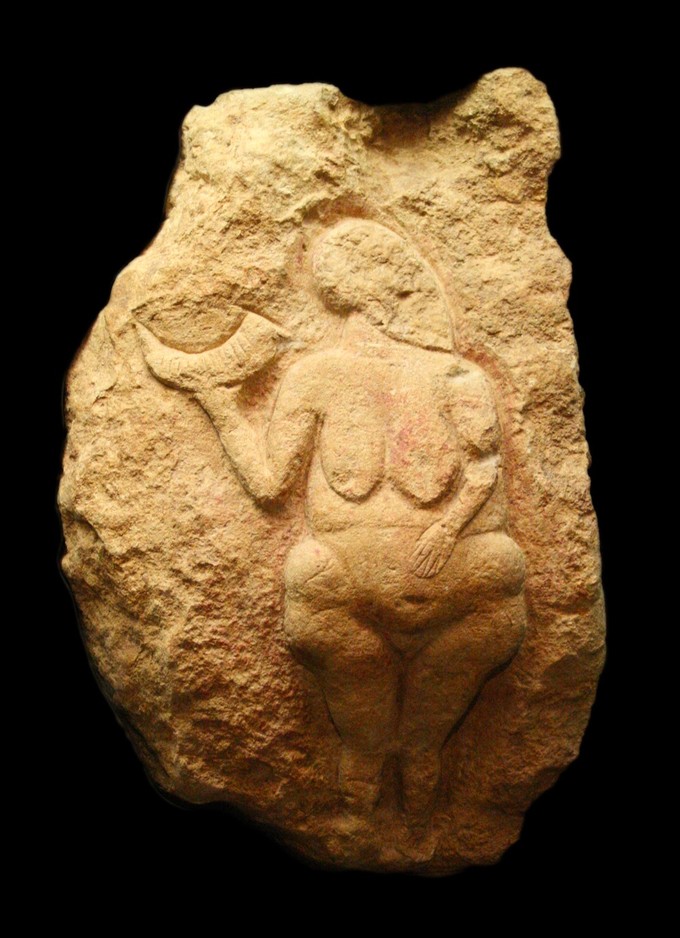 The second main form of Paleolithic art consists of monumental cave paintings and engravings. This type of rock art is typically found in European cave shelters, dating to 40,000–14,000 years ago, when the earth was largely covered in glacial ice. The images are predominately depictions of animals, human hand prints, and geometric patterns. The most common animals in cave art are the more intimidating ones, like cave lions, woolly rhinoceroses, and mammoths . These paintings could be creative recordings of nature, factual recordings of events, or part of some spiritual ritual , but scholars generally agree there is a symbolic and/or religious function to cave art.

The Art of the Stone Age: Mesolithic

From the Paleolithic through the Mesolithic, cave paintings and portable art such as figurines, statuettes, and beads predominated, with decorative figured workings also seen on some utilitarian objects. Venus figurines—an umbrella term for a number of prehistoric female statuettes portrayed with similar physical attributes—were very popular at the time. These figurines were carved from soft stone (such as steatite , calcite, or limestone), bone or ivory, or formed of clay and fired. The latter are among the oldest ceramics known. Also in this period, personal accessories and adornments were made from shell and bone. All the examples mentioned above fall under the category of portable art: small for easy transport.

Archaeological discoveries across a broad swath of Europe (especially southern France, like those at Lascaux; northern Spain; and Swabia, in Germany) include over two hundred caves with spectacular paintings, drawings, and sculptures that are among the earliest undisputed examples of representational image-making. Paintings and engravings along the caves' walls and ceilings fall under the category of parietal art . 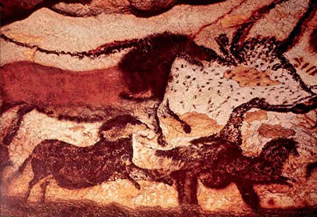 The Art of the Stone Age: Neolithic

The Neolithic saw the transformation of nomad human settlements into agrarian societies in need of permanent shelter. From this period there is evidence of early pottery, as well as sculpture, architecture, and the construction of megaliths . Early rock art also first appeared in the Neolithic period. 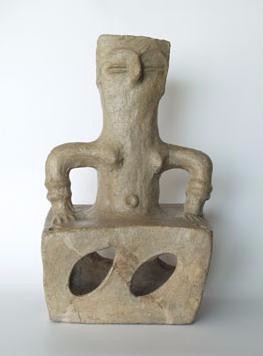 The End of the Stone Age

The advent of metalworking in the Bronze Age brought additional media available for use in making art, an increase in stylistic diversity, and the creation of objects that did not have any obvious function other than art. It also saw the development in some areas of artisans, a class of people specializing in the production of art, as well as in early writing systems.

By the Iron Age, civilizations with writing had arisen from Ancient Egypt to Ancient China.

The Stone Age marks a period of prehistory in which humans used primitive stone tools.docx

Chapter 1: Art in the Stone Age

Art In The Stone Age.docx

Chapter One_ Art in the Stone Age.pdf

Queens of The Stone Age.docx

The Stone Age started around 2.docx