Fungi are the major decomposers of nature; they break down organic matter which would otherwise not be recycled.

Explain the roles played by fungi in decomposition and recycling

Fungi & Their Roles as Decomposers and Recyclers

Fungi play a crucial role in the balance of ecosystems. They colonize most habitats on earth, preferring dark, moist conditions. They can thrive in seemingly-hostile environments, such as the tundra. However, most members of the Kingdom Fungi grow on the forest floor where the dark and damp environment is rich in decaying debris from plants and animals. In these environments, fungi play a major role as decomposers and recyclers, making it possible for members of the other kingdoms to be supplied with nutrients and to live.

The food web would be incomplete without organisms that decompose organic matter. Some elements, such as nitrogen and phosphorus, are required in large quantities by biological systems; yet, they are not abundant in the environment. The action of fungi releases these elements from decaying matter, making them available to other living organisms. Trace elements present in low amounts in many habitats are essential for growth, but would remain tied up in rotting organic matter if fungi and bacteria did not return them to the environment via their metabolic activity. 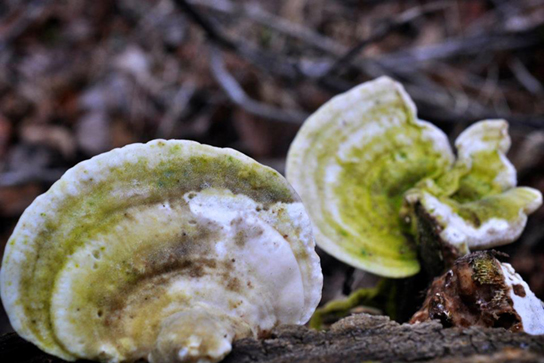 Fungi as decomposers: Fungi are an important part of ecosystem nutrient cycles. These bracket fungi growing on the side of a tree are the fruiting structures of a basidiomycete. They receive their nutrients through their hyphae, which invade and decay the tree trunk.

The ability of fungi to degrade many large and insoluble molecules is due to their mode of nutrition. As seen earlier, digestion precedes ingestion. Fungi produce a variety of exoenzymes to digest nutrients. These enzymes are either released into the substrate or remain bound to the outside of the fungal cell wall. Large molecules are broken down into small molecules, which are transported into the cell by a system of protein carriers embedded in the cell membrane. Because the movement of small molecules and enzymes is dependent on the presence of water, active growth depends on a relatively-high percentage of moisture in the environment.

As saprobes, fungi help maintain a sustainable ecosystem for the animals and plants that share the same habitat. In addition to replenishing the environment with nutrients, fungi interact directly with other organisms in beneficial, but sometimes damaging, ways. 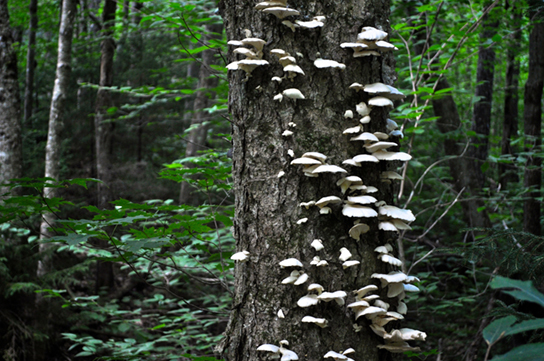 Fungi: beneficial & pathogenic: Shelf fungi, so called because they grow on trees in a stack, attack and digest the trunk or branches of a tree. While some shelf fungi are found only on dead trees, others can parasitize living trees, causing eventual death. They are considered serious tree pathogens.

Mutualistic Relationships with Fungi and Fungivores

Symbiosis is the ecological interaction between two organisms that live together. However, the definition does not describe the quality of the interaction. When both members of the association benefit, the symbiotic relationship is called mutualistic. Fungi form mutualistic associations with many types of organisms, including cyanobacteria, plants, and animals.

Mycorrhiza, which comes from the Greek words "myco" meaning fungus and "rhizo" meaning root, refers to the association between vascular plant roots and their symbiotic fungi. About 90 percent of all plant species have mycorrhizal partners. In a mycorrhizal association, the fungal mycelia use their extensive network of hyphae and large surface area in contact with the soil to channel water and minerals from the soil into the plant, thereby increasing a plant's nutrient uptake. In exchange, the plant supplies the products of photosynthesis to fuel the metabolism of the fungus.

Mycorrhizae display many characteristics of primitive fungi: they produce simple spores, show little diversification, do not have a sexual reproductive cycle, and cannot live outside of a mycorrhizal association. There are a number of types of mycorrhizae. Ectomycorrhizae ("outside" mycorrhiza) depend on fungi enveloping the roots in a sheath (called a mantle) and a Hartig net of hyphae that extends into the roots between cells. The fungal partner can belong to the Ascomycota, Basidiomycota, or Zygomycota. In a second type, the Glomeromycete fungi form vesicular–arbuscular interactions with arbuscular mycorrhiza (sometimes called endomycorrhizae). In these mycorrhiza, the fungi form arbuscules that penetrate root cells and are the site of the metabolic exchanges between the fungus and the host plant. The arbuscules (from the Latin for "little trees") have a shrub-like appearance. Orchids rely on a third type of mycorrhiza. Orchids are epiphytes that form small seeds without much storage to sustain germination and growth. Their seeds will not germinate without a mycorrhizal partner (usually a Basidiomycete). After nutrients in the seed are depleted, fungal symbionts support the growth of the orchid by providing necessary carbohydrates and minerals. Some orchids continue to be mycorrhizal throughout their lifecycle. 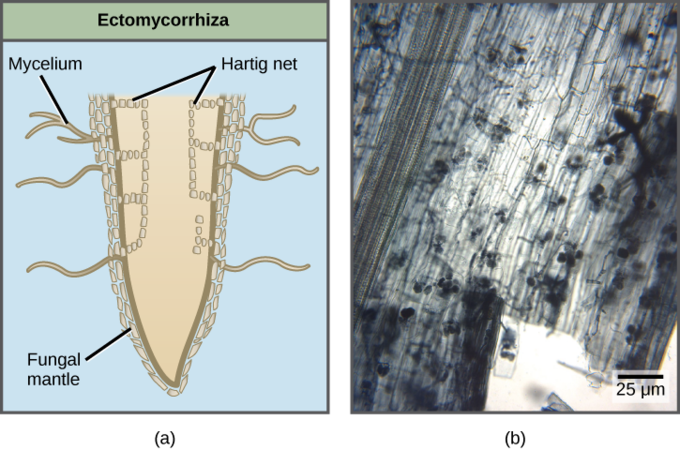 Mycorrhizal fungi: (a) Ectomycorrhiza and (b) arbuscular mycorrhiza have different mechanisms for interacting with the roots of plants.

Lichens display a range of colors and textures. They can survive in the most unusual and hostile habitats. They cover rocks, gravestones, tree bark, and the ground in the tundra where plant roots cannot penetrate. Lichens can survive extended periods of drought: they become completely desiccated and then rapidly become active once water is available again. Lichens fulfill many ecological roles, including acting as indicator species, which allow scientists to track the health of a habitat because of their sensitivity to air pollution.

Lichen: fungi and cyanobateria: Lichens have many forms. They may be (a) crust-like, (b) hair-like, or (c) leaf-like.

Lichens are not a single organism, but, rather, an example of a mutualism in which a fungus (usually a member of the Ascomycota or Basidiomycota phyla) lives in close contact with a photosynthetic organism (a eukaryotic alga or a prokaryotic cyanobacterium). Generally, neither the fungus nor the photosynthetic organism can survive alone outside of the symbiotic relationship. The body of a lichen, referred to as a thallus, is formed of hyphae wrapped around the photosynthetic partner. The photosynthetic organism provides carbon and energy in the form of carbohydrates. Some cyanobacteria fix nitrogen from the atmosphere, contributing nitrogenous compounds to the association. In return, the fungus supplies minerals and protection from dryness and excessive light by encasing the algae in its mycelium. The fungus also attaches the symbiotic organism to the substrate. 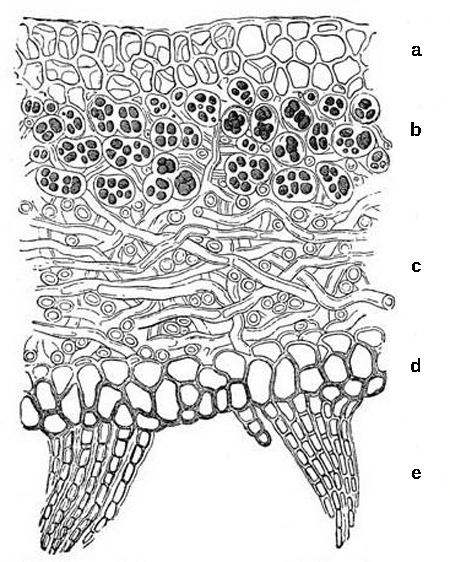 The thallus of lichens grows very slowly, expanding its diameter a few millimeters per year. Both the fungus and the alga participate in the formation of dispersal units for reproduction. Lichens produce soredia, clusters of algal cells surrounded by mycelia. Soredia are dispersed by wind and water and form new lichens.

Fungi have evolved mutualisms with numerous insects. Arthropods (jointed, legged invertebrates, such as insects) depend on the fungus for protection from predators and pathogens, while the fungus obtains nutrients and a way to disseminate spores into new environments. The association between species of Basidiomycota and scale insects is one example. The fungal mycelium covers and protects the insect colonies. The scale insects foster a flow of nutrients from the parasitized plant to the fungus. In a second example, leaf-cutting ants of Central and South America literally farm fungi. They cut disks of leaves from plants and pile them up in gardens. Fungi are cultivated in these disk gardens, digesting the cellulose in the leaves that the ants cannot break down. Once smaller sugar molecules are produced and consumed by the fungi, the fungi in turn become a meal for the ants. The insects also patrol their garden, preying on competing fungi. Both ants and fungi benefit from the association. The fungus receives a steady supply of leaves and freedom from competition, while the ants feed on the fungi they cultivate.