The Evolution of Seed Plants and Adaptations for Land

The evolution of seeds allowed plants to reproduce independently of water; pollen allows them to disperse their gametes great distances.

The lush palms on tropical shorelines do not depend upon water for the dispersal of their pollen, fertilization, or the survival of the zygote, unlike mosses, liverworts, and ferns of the terrain. Seed plants, such as palms, have broken free from the need to rely on water for their reproductive needs. They play an integral role in all aspects of life on the planet, shaping the physical terrain, influencing the climate, and maintaining life as we know it. For millennia, human societies have depended upon seed plants for nutrition and medicinal compounds; and more recently, for industrial by-products, such as timber and paper, dyes, and textiles. Palms provide materials including rattans, oils, and dates. Wheat is grown to feed both human and animal populations. The fruit of the cotton boll flower is harvested as a boll, with its fibers transformed into clothing or pulp for paper. The showy opium poppy is valued both as an ornamental flower and as a source of potent opiate compounds.

Seed plants dominate the landscape: Seed plants dominate the landscape and play an integral role in human societies. (a) Palm trees grow along the shoreline; (b) wheat is a crop grown in most of the world; (c) the flower of the cotton plant produces fibers that are woven into fabric; (d) the potent alkaloids of the beautiful opium poppy have influenced human life both as a medicinal remedy and as a dangerously-addictive drug.

Seeds and Pollen as an Evolutionary Adaptation to Dry Land

Unlike bryophyte and fern spores (which are haploid cells dependent on moisture for rapid development of gametophytes ), seeds contain a diploid embryo that will germinate into a sporophyte. Storage tissue to sustain growth and a protective coat give seeds their superior evolutionary advantage. Several layers of hardened tissue prevent desiccation, freeing reproduction from the need for a constant supply of water. Furthermore, seeds remain in a state of dormancy induced by desiccation and the hormone abscisic acid until conditions for growth become favorable. Whether blown by the wind, floating on water, or carried away by animals, seeds are scattered in an expanding geographic range, thus avoiding competition with the parent plant.

Pollen grains are male gametophytes carried by wind, water, or a pollinator. The whole structure is protected from desiccation and can reach the female organs without dependence on water. Male gametes reach female gametophyte and the egg cell gamete though a pollen tube: an extension of a cell within the pollen grain. The sperm of modern gymnosperms lack flagella, but in cycads and the Gingko, the sperm still possess flagella that allow them to swim down the pollen tube to the female gamete; however, they are enclosed in a pollen grain. 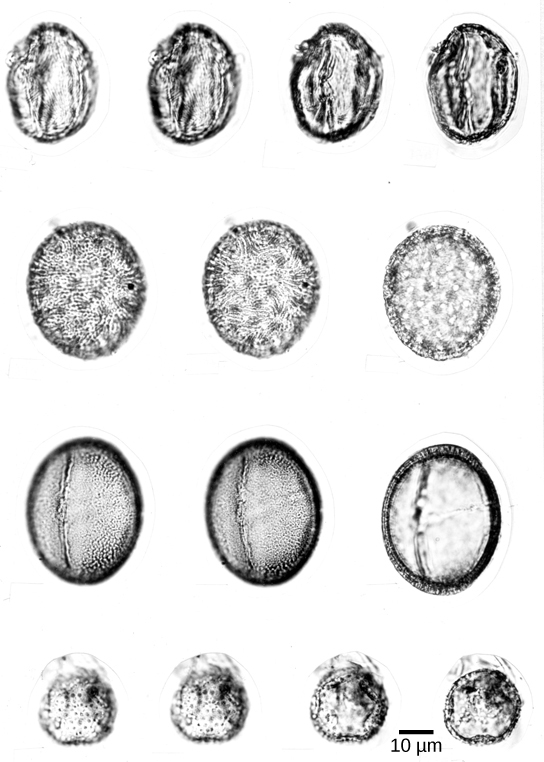 Seed ferns gave rise to the gymnosperms during the Devonian Period, allowing them to adapt to dry conditions. 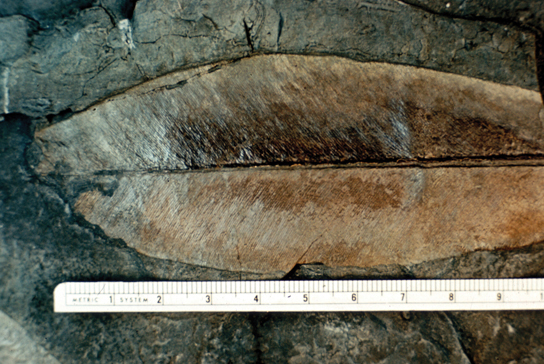 Seed ferns: This fossilized leaf is from Glossopteris, a seed fern that thrived during the Permian age (290–240 million years ago).

The fossil plant Elkinsia polymorpha, a "seed fern" from the Devonian period (about 400 million years ago) is considered the earliest seed plant known to date. Seed ferns produced their seeds along their branches without specialized structures. What makes them the first true seed plants is that they developed structures called cupules to enclose and protect the ovule (the female gametophyte and associated tissues) which develops into a seed upon fertilization. Seed plants resembling modern tree ferns became more numerous and diverse in the coal swamps of the Carboniferous period. This appears to have been the result of a whole genome duplication event around 319 million years ago. 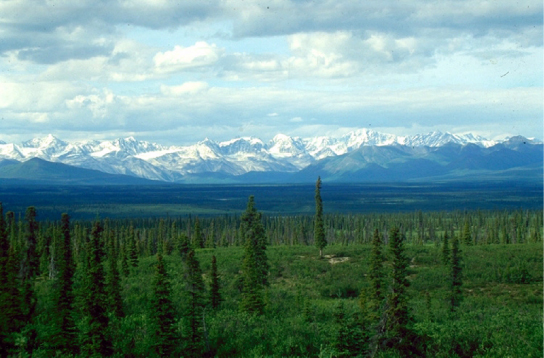 Gymnosperms of the taiga: This boreal forest (taiga) has low-lying plants and conifer trees, as these plants are better suited to the colder, dryer conditions.

Fossil records indicate the first gymnosperms (progymnosperms) most likely originated in the Paleozoic era, during the middle Devonian period about 390 million years ago. Following the wet Mississippian and Pennsylvanian periods, which were dominated by giant fern trees, the Permian period was dry. This gave a reproductive edge to seed plants, which are better adapted to survive dry spells. The Ginkgoales, a group of gymnosperms with only one surviving species, the Gingko biloba, were the first gymnosperms to appear during the lower Jurassic. Gymnosperms expanded in the Mesozoic era (about 240 million years ago), supplanting ferns in the landscape, and reaching their greatest diversity during this time. It has been suggested that during the mid-Mesozoic era, pollination of some extinct groups of gymnosperms was performed by extinct species of scorpionflies that had a specialized proboscis for feeding on pollination drops. The scorpionflies probably engaged in pollination mutualisms with gymnosperms, long before the similar and independent coevolution of nectar-feeding insects on angiosperms.

The Jurassic period was as much the age of the cycads (palm-tree-like gymnosperms) as the age of the dinosaurs. Gingkoales and the more familiar conifers also dotted the landscape. Although angiosperms (flowering plants) are the major form of plant life in most biomes, gymnosperms still dominate some ecosystems, such as the taiga (boreal forests) and the alpine forests at higher mountain elevations because of their adaptation to cold and dry growth conditions.

Angiosperms, which evolved in the Cretaceous period, are a diverse group of plants which protect their seeds within an ovary called a fruit.

Discuss the evolution and adaptations of angiosperms

Undisputed fossil records place the massive appearance and diversification of angiosperms in the middle to late Mesozoic era. Angiosperms ("seed in a vessel") produce a flower containing male and/or female reproductive structures. Fossil evidence indicates that flowering plants first appeared in the Lower Cretaceous, about 125 million years ago, and were rapidly diversifying by the Middle Cretaceous, about 100 million years ago. Earlier traces of angiosperms are scarce. Fossilized pollen recovered from Jurassic geological material has been attributed to angiosperms. A few early Cretaceous rocks show clear imprints of leaves resembling angiosperm leaves. By the mid-Cretaceous, a staggering number of diverse, flowering plants crowd the fossil record. The same geological period is also marked by the appearance of many modern groups of insects, including pollinating insects that played a key role in ecology and the evolution of flowering plants. 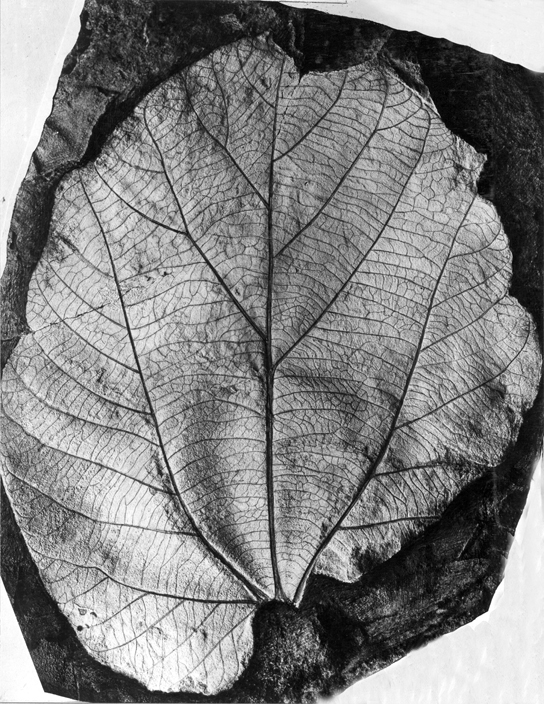 Fossil evidence of angiosperms: This leaf imprint shows a Ficus speciosissima, an angiosperm that flourished during the Cretaceous period. A large number of pollinating insects also appeared during this same time.

Although several hypotheses have been offered to explain this sudden profusion and variety of flowering plants, none have garnered the consensus of paleobotanists (scientists who study ancient plants). New data in comparative genomics and paleobotany have, however, shed some light on the evolution of angiosperms. Rather than being derived from gymnosperms, angiosperms form a sister clade (a species and its descendents) that developed in parallel with the gymnosperms. The two innovative structures of flowers and fruit represent an improved reproductive strategy that served to protect the embryo, while increasing genetic variability and range. Paleobotanists debate whether angiosperms evolved from small woody bushes, or were basal angiosperms related to tropical grasses. Both views draw support from cladistic studies. The so-called woody magnoliid hypothesis (which proposes that the early ancestors of angiosperms were shrubs) also offers molecular biological evidence.

The most primitive living angiosperm is considered to be Amborella trichopoda, a small plant native to the rainforest of New Caledonia, an island in the South Pacific. Analysis of the genome of A. trichopoda has shown that it is related to all existing flowering plants and belongs to the oldest confirmed branch of the angiosperm family tree. A few other angiosperm groups, known as basal angiosperms, are viewed as primitive because they branched off early from the phylogenetic tree. Most modern angiosperms are classified as either monocots or eudicots based on the structure of their leaves and embryos. Basal angiosperms, such as water lilies, are considered more primitive because they share morphological traits with both monocots and eudicots.

Flowers and Fruits as an Evolutionary Adaptation

Angiosperms produce their gametes in separate organs, which are usually housed in a flower. Both fertilization and embryo development take place inside an anatomical structure that provides a stable system of sexual reproduction largely sheltered from environmental fluctuations. Flowering plants are the most diverse phylum on Earth after insects; flowers come in a bewildering array of sizes, shapes, colors, smells, and arrangements. Most flowers have a mutualistic pollinator, with the distinctive features of flowers reflecting the nature of the pollination agent. The relationship between pollinator and flower characteristics is one of the great examples of coevolution. 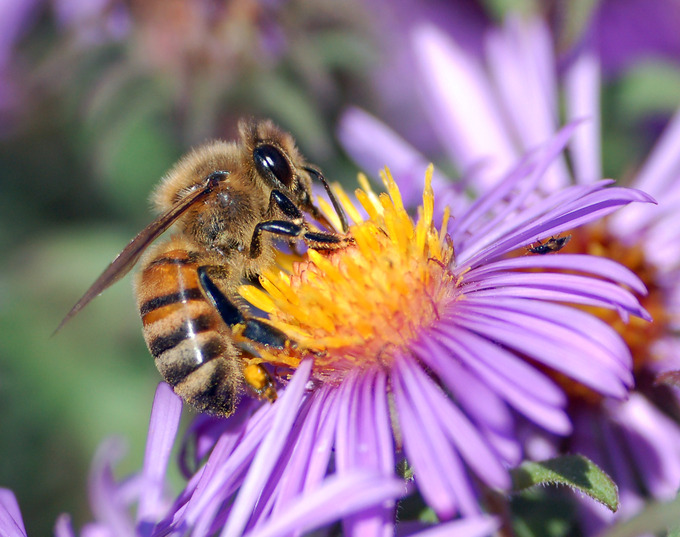 Following fertilization of the egg, the ovule grows into a seed. The surrounding tissues of the ovary thicken, developing into a fruit that will protect the seed and often ensure its dispersal over a wide geographic range. Not all fruits develop from an ovary; such structures are "false fruits." Like flowers, fruit can vary tremendously in appearance, size, smell, and taste. Tomatoes, walnut shells and avocados are all examples of fruit. As with pollen and seeds, fruits also act as agents of dispersal. Some may be carried away by the wind. Many attract animals that will eat the fruit and pass the seeds through their digestive systems, then deposit the seeds in another location. Cockleburs are covered with stiff, hooked spines that can hook into fur (or clothing) and hitch a ride on an animal for long distances. The cockleburs that clung to the velvet trousers of an enterprising Swiss hiker, George de Mestral, inspired his invention of the loop and hook fastener he named Velcro.