Energy budgets and life history strategies determine the type of reproductive capacity displayed by a population.

Describe the energy budgets of, and the life history strategies used in, reproduction

Energy is required by all living organisms for their growth, maintenance, and reproduction. At the same time, energy is often a major limiting factor in determining an organism's survival. Plants, for example, acquire energy from the sun via photosynthesis, but must expend this energy to grow, maintain health, and produce energy-rich seeds to produce the next generation. Animals also have the additional burden of using some of their energy reserves to acquire food. In addition, some animals must expend energy caring for their offspring. Thus, all species have an energy budget in which they must balance energy intake with their use of energy for metabolism, reproduction, parental care, and energy storage, as when bears build up body fat for winter hibernation.

Fecundity is the potential reproductive capacity of an individual within a population. In other words, it describes how many offspring could ideally be produced if an individual has as many offspring as possible, repeating the reproductive cycle as soon as possible after the birth of the offspring. In animals, fecundity is inversely related to the amount of parental care given to an individual offspring. Species that produce a large number of offspring, such as many marine invertebrates, usually provide little if any care for those offspring, as they would not have the energy or the ability to do so. Most of their energy budget is used to produce many tiny offspring. Animals with this strategy are often self-sufficient at a very early age. This is because of the energy trade-off these organisms have made to maximize their evolutionary fitness. Since their energy is used for producing offspring instead of parental care, it makes sense that these offspring have some ability to be able to move within their environment to find food and perhaps shelter. Even with these abilities, their small size makes them extremely vulnerable to predation, so the production of many offspring allows enough of them to survive to maintain the species.

Animal species that have few offspring during a reproductive event usually give extensive parental care, devoting much of their energy budget to these activities, sometimes at the expense of their own health. This is the case with many mammals, such as humans, kangaroos, and pandas. The offspring of these species are relatively helpless at birth, needing to develop before they achieve self-sufficiency.

Plants with low fecundity produce few energy-rich seeds (such as coconuts and chestnuts) that have a good chance to germinate into a new organism. Plants with high fecundity usually have many small, energy-poor seeds (as do orchids) that have a relatively-poor chance of surviving. Although it may seem that coconuts and chestnuts have a better chance of surviving, the energy trade-off of the orchid is also very effective. It is a matter of where the energy is used: for large numbers of seeds or for fewer seeds with more energy. 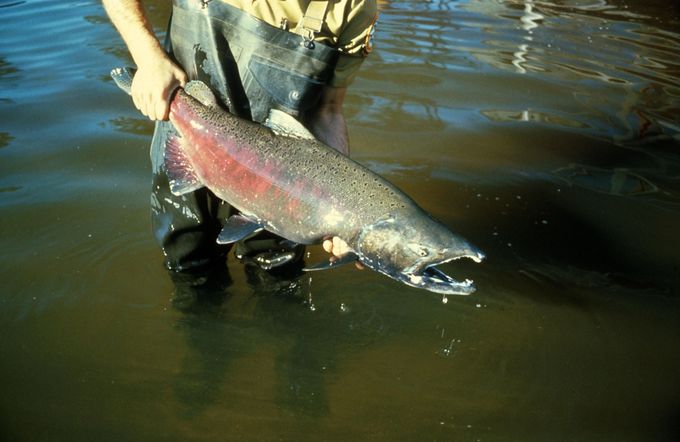 Semelparous species: Chinook salmon are an example of a population that uses its energy budget in one major reproductive event, dying shortly thereafter.

The timing of reproduction in a life history also affects species survival. Organisms that reproduce at an early age have a greater chance of producing offspring, but this is usually at the expense of their growth and the maintenance of their health. Conversely, organisms that start reproducing later in life often have greater fecundity or are better able to provide parental care, but they risk not surviving to reproductive age. Examples of this can be seen in fish. Small fish, such as guppies, use their energy to reproduce rapidly, but never attain the size that would give them defense against some predators. Larger fish, such as bluefin tuna and mako sharks, use their energy to attain a large size, but do so with the risk that they will die before they can reproduce or reproduce to their maximum. These different energy strategies and trade-offs are key to understanding the evolution of each species as it maximizes its fitness and fills its niche.

Some life history traits, such as fecundity, timing of reproduction, and parental care, can be grouped together into general strategies that are used by multiple species. Semelparous species are those that only reproduce once during their lifetime and then die. Such species use most of their resource budget during a single reproductive event, sacrificing their health to the point that they do not survive. Examples of semelparity are bamboo, which flowers once and then dies, and the Chinook salmon, which uses most of its energy reserves to migrate from the ocean to its freshwater nesting area, where it reproduces and then dies. In contrast, iteroparous species reproduce repeatedly during their lives. Some animals are able to mate only once per year, but survive multiple mating seasons. Primates, including humans and chimpanzees, are examples of animals that display iteroparity.

Distinguish between K- and r-selected species

While reproductive strategies play a key role in life histories, they do not account for important factors such as limited resources and competition. The regulation of population growth by these factors can be used to introduce a classical concept in population biology: that of K-selected versus r-selected species.

By the second half of the twentieth century, the concept of K- and r-selected species was used extensively and successfully to study populations. The concept relates not only to reproductive strategies, but also to a species' habitat and behavior. This includes the way they obtain resources and care for their young, as well as length of life and survivorship factors. For this analysis, population biologists have grouped species into the two large categories, K-selected and r-selected, although they are really two ends of a continuum. The first variable is K (the carrying capacity of a population; density dependent), and the second variable is r (the intrinsic rate of natural increase in population size, density independent).

K-selected species are those in stable, predictable environments. Populations of K-selected species tend to exist close to their carrying capacity (hence the term K-selected) where intraspecific competition is high. These species produce few offspring, have a long gestation period, and often give long-term care to their offspring. While larger in size when born, the offspring are relatively helpless and immature at birth. By the time they reach adulthood, they must develop skills to compete for natural resources. Examples of K-selected species are primates including humans, other mammals such as elephants, and plants such as oak trees. 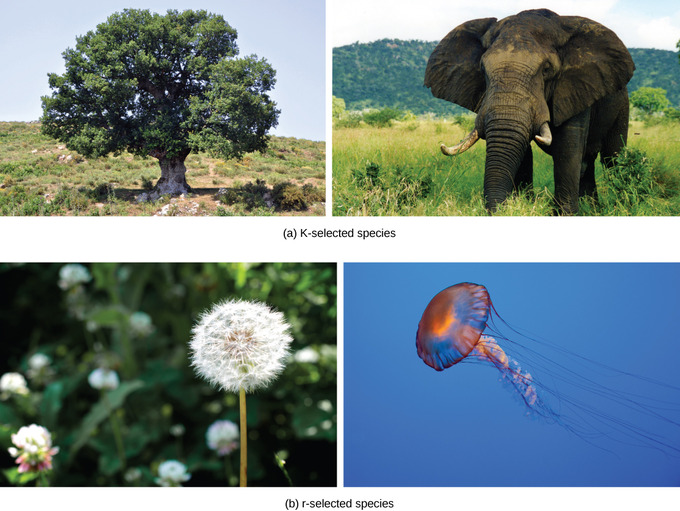 In plants, scientists think of parental care more broadly: how long fruit takes to develop or how long it remains on the plant are determining factors in the time to the next reproductive event. Oak trees grow very slowly and take, on average, 20 years to produce their first seeds, known as acorns. As many as 50,000 acorns can be produced by an individual tree, but the germination rate is low as many of these rot or are eaten by animals such as squirrels. In some years, oaks may produce an exceptionally large number of acorns; these years may be on a two- or three-year cycle depending on the species of oak (r-selection).

As oak trees grow to a large size (and for many years before they begin to produce acorns) they devote a large percentage of their energy budget to growth and maintenance. The tree's height and size allow it to dominate other plants in the competition for sunlight, the oak's primary energy resource. Furthermore, when it does reproduce, the oak produces large, energy-rich seeds that use their energy reserve to become quickly established (K-selection).

In contrast to K-selected species, r-selected species have a large number of small offspring (hence their r designation). This strategy is often employed in unpredictable or changing environments. Animals that are r-selected do not give long-term parental care and the offspring are relatively mature and self-sufficient at birth. Examples of r-selected species are marine invertebrates, such as jellyfish, and plants, such as the dandelion. Dandelions have small seeds that are dispersed long distances by wind; many seeds are produced simultaneously to ensure that at least some of them reach a hospitable environment. Seeds that land in inhospitable environments have little chance for survival since the seeds are low in energy content. Note that survival is not necessarily a function of energy stored in the seed itself.

The r- and K-selection theory, although accepted for decades and used for much groundbreaking research, has now been reconsidered. Many population biologists have abandoned or modified it. Over the years, several studies attempted to confirm the theory, but these attempts have largely failed. Many species were identified that did not follow the theory's predictions. Furthermore, the theory ignored the age-specific mortality of the populations which scientists now know is very important. New demographic-based models of life history evolution have been developed which incorporate many ecological concepts included in r- and K-selection theory, as well as population age structure and mortality factors.