Plant meristematic tissues are cells that divide in order to give rise to various organs of the plant and keep the plant growing.

The adult body of vascular plants is the result of meristematic activity. Plant meristems are centers of mitotic cell division, and are composed of a group of undifferentiated self-renewing stem cells from which most plant structures arise. Meristematic cells are also responsible for keeping the plant growing. The Shoot Apical Meristem (SAM) gives rise to organs like the leaves and flowers, while the Root Apical Meristem (RAM) provides the meristematic cells for the future root growth. The cells of the shoot and root apical meristems divide rapidly and are considered to be indeterminate, which means that they do not possess any defined end fate. In that sense, the meristematic cells are frequently compared to the stem cells in animals, which have an analogous behavior and function.

Meristematic tissues are cells or group of cells that have the ability to divide. These tissues in a plant consist of small, densely packed cells that can keep dividing to form new cells. Meristematic tissue is characterized by small cells, thin cell walls, large cell nuclei, absent or small vacuoles, and no intercellular spaces.

Meristematic tissues are found in many locations, including near the tips of roots and stems (apical meristems), in the buds and nodes of stems, in the cambium between the xylem and phloem in dicotyledonous trees and shrubs, under the epidermis of dicotyledonous trees and shrubs (cork cambium), and in the pericycle of roots, producing branch roots. The two types of meristems are primary meristems and secondary meristems.

The apical meristem, also known as the "growing tip," is an undifferentiated meristematic tissue found in the buds and growing tips of roots in plants. Its main function is to trigger the growth of new cells in young seedlings at the tips of roots and shoots and forming buds. Apical meristems are organized into four zones: (1) the central zone, (2) the peripheral zone, (3) the medullary meristem and (3) the medullary tissue. 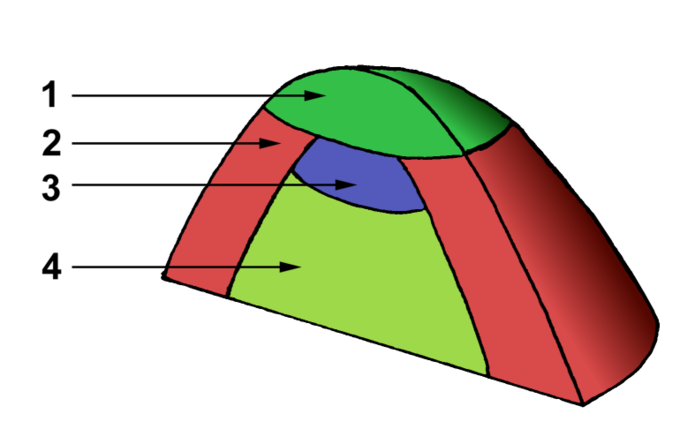 Meristematic zones: Each zone of the apical meristem has a particular function. Pictured here are the (1) central zone, (2) peripheral zone, (3) medullary meristem and (3) medullary tissue. 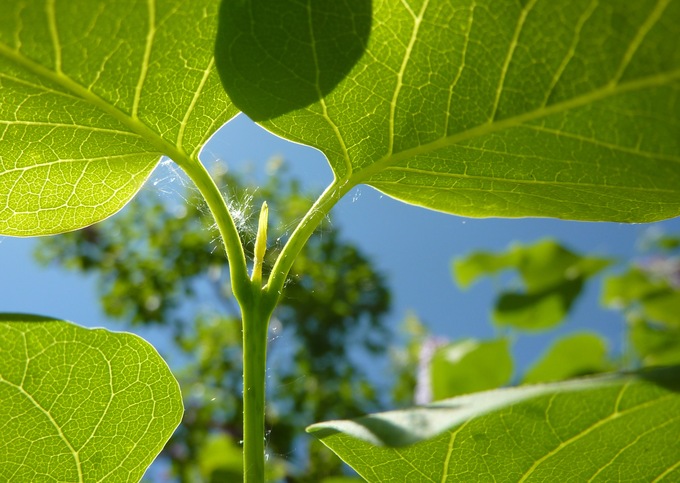 Apical meristem: The apical meristem, pictured in the center of the leaves of this image, is also termed the "growing tip". Its main function is to begin growth of new cells in young seedlings at the tips of roots and shoots (forming buds, among other things).

An active apical meristem lays down a growing root or shoot behind itself, pushing itself forward. They are very small compared to the cylinder-shaped lateral meristems, and are composed of several layers, which varies according to plant type. The outermost layer is called the tunica, while the innermost layers are cumulatively called the corpus.

A variety of genes control flower development, which involves sexual maturation and growth of reproductive organs as shown by the ABC model.

Flower development is the process by which angiosperms produce a pattern of gene expression in meristems that leads to the appearance of a flower. A flower (also referred to as a bloom or blossom) is the reproductive structure found in flowering plants. There are three physiological developments that must occur in order for reproduction to take place:

Anatomy of a flower: Mature flowers aid in reproduction for the plant. In order to achieve reproduction, the plant must become sexually mature, the apical meristem must become a floral meristem, and the flower must develop its individual reproductive organs.

A flower develops on a modified shoot or axis from a determinate apical meristem (determinate meaning the axis grows to a set size). The transition to flowering is one of the major phase changes that a plant makes during its life cycle. The transition must take place at a time that is favorable for fertilization and the formation of seeds, hence ensuring maximal reproductive success. In order to flower at an appropriate time, a plant can interpret important endogenous and environmental cues such as changes in levels of plant hormones and seasonable temperature and photoperiod changes. Many perennial and most biennial plants require vernalization to flower.

When plants recognize an opportunity to flower, signals are transmitted through florigen, which involves a variety of genes, including CONSTANS, FLOWERING LOCUS C and FLOWERING LOCUS T. Florigen is produced in the leaves in reproductively favorable conditions and acts in buds and growing tips to induce a number of different physiological and morphological changes.

From a genetic perspective, two phenotypic changes that control vegetative and floral growth are programmed in the plant. The first genetic change involves the switch from the vegetative to the floral state. If this genetic change is not functioning properly, then flowering will not occur. The second genetic event follows the commitment of the plant to form flowers. The sequential development of plant organs suggests that a genetic mechanism exists in which a series of genes are sequentially turned on and off. This switching is necessary for each whorl to obtain its final unique identity.

In the simple ABC model of floral development, three gene activities (termed A, B, and C-functions) interact to determine the developmental identities of the organ primordia (singular: primordium) within the floral meristem. The ABC model of flower development was first developed to describe the collection of genetic mechanisms that establish floral organ identity in the Rosids and the Asterids; both species have four verticils (sepals, petals, stamens and carpels), which are defined by the differential expression of a number of homeotic genes present in each verticil.

Most genes central in this model belong to the MADS-box genes and are transcription factors that regulate the expression of the genes specific for each floral organ.

BIO 30053 •  Polytechnic University of the Philippines

SCIENCE 10 •  University of the Philippines Diliman

PH 101 •  University of the Philippines Visayas