Cathode rays are electron beams or streams of electrons that were observed for the first time in Crookes tubes (vacuum tubes).

Cathode rays (also called an electron beam or an e-beam) are streams of electrons observed in vacuum tubes. If an evacuated glass tube is equipped with two electrodes and a voltage is applied, the glass opposite the negative electrode is observed to glow from electrons emitted from the cathode. Electrons were first discovered as the constituents of cathode rays. The image in a classic television set is created by focused beam of electrons deflected by electric or magnetic fields in cathode ray tubes (CRTs).

Cathode rays are so named because they are emitted by the negative electrode, or cathode, in a vacuum tube. To release electrons into the tube, they must first be detached from the atoms of the cathode. The early cold cathode vacuum tubes, called Crookes tubes, used a high electrical potential between the anode and the cathode to ionize the residual gas in the tube. The electric field accelerated the ions and the ions released electrons when they collided with the cathode.

Modern vacuum tubes use thermionic emission, in which the cathode is made of a thin wire filament that is heated by a separate electric current passing through it. The increased random heat motion of the filament atoms knocks electrons out of the atoms at the surface of the filament and into the evacuated space of the tube. Since the electrons have a negative charge, they are repelled by the cathode and attracted to the anode. They travel in straight lines through the empty tube. The voltage applied between the electrodes accelerates these low mass particles to high velocities.

Cathode rays are invisible, but their presence was first detected in early vacuum tubes when they struck the glass wall of the tube, exciting the atoms of the glass and causing them to emit light—a glow called fluorescence. Researchers noticed that objects placed in the tube in front of the cathode could cast a shadow on the glowing wall, and realized that something must be traveling in straight lines from the cathode. After the electrons reach the anode, they travel through the anode wire to the power supply and back to the cathode, so cathode rays carry electric current through the tube.

In 1838, Michael Faraday passed a current through a rarefied air-filled glass tube and noticed a strange light arc with its beginning at the cathode (negative electrode) and its end almost at the anode (positive electrode).

In the 1870s, British physicist William Crookes and others were able to evacuate rarefied tubes to a pressure below 10−6 atm. These were called Crookes tubes. Faraday had been the first to notice a dark space just in front of the cathode, where there was no luminescence. This came to be called the cathode dark space, Faraday dark space, or Crookes dark space.

Crookes found that as he pumped more air out of the tubes, the Faraday dark space spread down the tube from the cathode toward the anode, until the tube was totally dark. But at the anode (positive) end of the tube, the glass of the tube itself began to glow. What was happening was that as more air was pumped from the tubes, the electrons could travel farther, on average, before they struck a gas atom. By the time the tube was dark, most of the electrons could travel in straight lines from the cathode to the anode end of the tube without a collision. With no obstructions, these low mass particles were accelerated to high velocities by the voltage between the electrodes. These were the cathode rays. When they reached the anode end of the tube, they were traveling so fast that, although they were attracted to it, they often flew past the anode and struck the back wall of the tube. When they struck atoms in the glass wall, they excited their orbital electrons to higher energy levels, causing them to fluoresce. 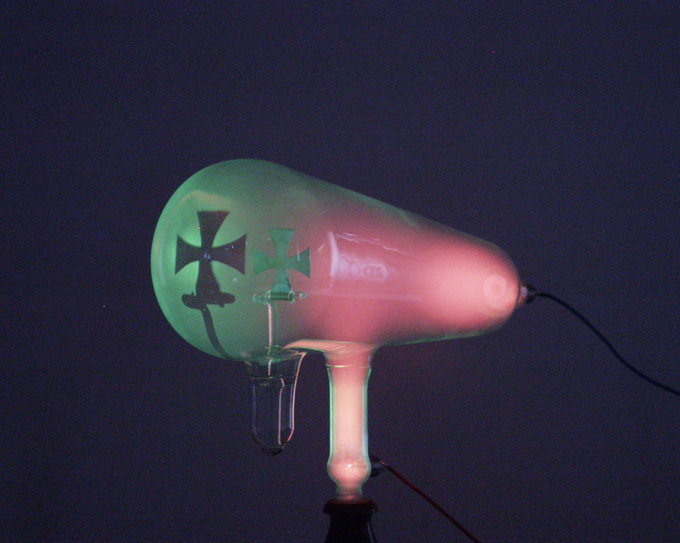 Crookes tube: A Crookes tube is a rarefied tube evacuated to a pressure below 10−6 atm. It was used in discovery of cathode rays.

Later researchers painted the inside back wall with fluorescent chemicals such as zinc sulfide, to make the glow more visible. Cathode rays themselves are invisible, but this accidental fluorescence allowed researchers to notice that objects in the tube in front of the cathode, such as the anode, cast sharp-edged shadows on the glowing back wall. In 1869, German physicist Johann Hittorf was first to realize that something must be traveling in straight lines from the cathode to cast the shadows. Eugene Goldstein named them cathode rays.

Interactive: Crookes Tube: Connect the two electrodes to a high voltage source and see them produce cathode rays. J.J. Thomson used a similar experimental setup to discover the first sub-atomic particle. See what you can determine about the stream of particles that were called cathode rays.

The oil drop experiment calculated the charge of an electron using charged oil droplets suspended in an electric field.

In 1909, Robert Millikan and Harvey Fletcher conducted the oil drop experiment to determine the charge of an electron. They suspended tiny charged droplets of oil between two metal electrodes by balancing downward gravitational force with upward drag and electric forces. The density of the oil was known, so Millikan and Fletcher could determine the droplets' masses from their observed radii (since from the radii they could calculate the volume and thus, the mass). Using the known electric field and the values of gravity and mass, Millikan and Fletcher determined the charge on oil droplets in mechanical equilibrium. By repeating the experiment, they confirmed that the charges were all multiples of some fundamental value. They calculated this value to be 1.5924 × 10−19 Coulombs (C), which is within 1% of the currently accepted value of 1.602176487 × 10−19 C. They proposed that this was the charge of a single electron.

Charge of an Electron: Millikan: How did scientists discover how much negative charge an electron had? Robert Millikan and Harvey Fletcher used the oil drop experiment.

How did the process work?

The figure below shows a simplified scheme of Millikan's oil drop experiment. The apparatus incorporated a pair of metal plates and a specific type of oil. Millikan and Fletcher discovered it was best to use an oil with an extremely low vapor pressure, such as one designed for use in a vacuum apparatus. Ordinary oil would evaporate under the heat of the light source, causing the mass of the oil drop to change over the course of the experiment.

By applying a potential difference across a parallel pair of horizontal metal plates, a uniform electric field was created in the space between them. A ring of insulating material was used to hold the plates apart. Four holes were cut into the ring—three for illumination by a bright light and another to allow viewing through a microscope. A fine mist of oil droplets was sprayed into a chamber above the plates. The oil drops became electrically charged through friction with the nozzle as they were sprayed. Alternatively, charge could be induced by including an ionizing radiation source (such as an X-ray tube).

Simplified scheme of Millikan's oil-drop experiment: This apparatus has a parallel pair of horizontal metal plates. A uniform electric field is created between them. The ring has three holes for illumination and one for viewing through a microscope. A specific type of oil is sprayed into the chamber, where drops become electrically charged. The droplets enter the space between the plates and can be controlled by changing the voltage across the plates.

The droplets entered the space between the plates and, because they were charged, they could be controlled by changing the voltage across the plates. Initially, the oil drops were allowed to fall between the plates with the electric field turned off. They quickly reached terminal velocity due to friction with the air in the chamber. The field was turned on and, if it was large enough, some of the drops (the charged ones) would start to rise. This is because the upwards electric force, FE, is greater for them than the downwards gravitational force, g. (A charged rubber rod can pick up bits of paper in the same way.) A likely looking drop was selected and kept in the middle of the field of view by alternately switching off the voltage until all the other drops fell. The experiment was continued with this single drop.

Q is the charge of an electron, E is the electric field, m is mass of the droplet, and g is gravity.

One can see how Millikan calculated the charge of an electron. Millikan found that all drops had charges which were multiples of 1.6 x 10-19 C.

At the time of Millikan and Fletcher's oil drop experiments, the existence of subatomic particles was not universally accepted. Experimenting with cathode rays in 1897, J. J. Thomson discovered negatively charged "corpuscles" with a mass about 1,840 times smaller than that of a hydrogen atom. George FitzGerald and Walter Kaufmann found similar results. In 1923, Millikan won the Nobel Prize in physics in part because of this experiment.

Aside from discerning an electron's charge, the beauty of the oil drop experiment lies in its simple and elegant demonstration that charge is actually quantized. The experiment has since been repeated by generations of physics students—although it is rather expensive and difficult to do properly. 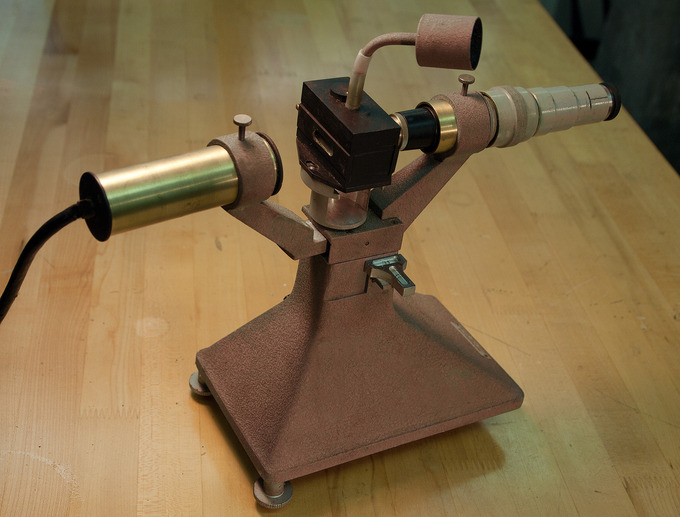 2.4 The Observations That Led to the Nuclear Atom Model

Evolution of nuclear model of an atom.docx

SCIENCE 170B •  University Of Arizona

Copy of Radioactivity and Nuclear Chemistry.pdf