Properties of the Halogens

Describe the physical and chemical properties of halogens.


The halogens are a series of non-metal elements from group 17 of the periodic table (formerly VII). The halogens include fluorine (F), chlorine (Cl), bromine (Br), iodine (I), and astatine (At). The artificially created element 117 (ununseptium) may also be considered a halogen.

Atoms get bigger down the group as additional electron shells are filled. When fluorine exists as a diatomic molecule, the F–F bond is unexpectedly weak. This is because fluorine atoms are the smallest of the halogens—the atoms are bonded close together, which leads to repulsion between free electrons in the two fluorine atoms.

The boiling points of halogens increase down the group due to the increasing strength of Van der Waals forces as the size and relative atomic mass of the atoms increase. This change manifests itself in a change in the phase of the elements from gas (F2, Cl2) to liquid (Br2), to solid (I2). The halogens are the only periodic table group containing elements in all three familiar states of matter (solid, liquid, and gas) at standard temperature and pressure.

Physical States of Halogens: Halogens represents all of the three familiar states of matter: (left to right) chlorine is a gas, bromine is a liquid, and iodine is a solid. Highly reactive fluorine is not included in the picture.

Halogens are highly reactive, and they can be harmful or lethal to biological organisms in sufficient quantities. This reactivity is due to high electronegativity and high effective nuclear charge. Halogens can gain an electron by reacting with atoms of other elements.

Fluorine is one of the most reactive elements. It reacts with otherwise inert materials such as glass, and it forms compounds with the heavier noble gases. It is a corrosive and highly toxic gas. Fluorine's reactivity means that once it does react with something, it bonds so strongly that the resulting molecule is inert and non-reactive. Fluorine can react with glass in the presence of small amounts of water to form silicon tetrafluoride (SiF4). Thus fluorine must be handled with substances like the inert organofluorine compound Teflon.

Chlorine has maximum solubility of 7.1 g per kg of water at ambient temperature (21 °C). Dissolved chlorine reacts to form hydrochloric acid (HCl) and hypochlorous acid (HClO), a solution that can be used as a disinfectant or bleach:

Bromine has a solubility of 3.41 g per 100 g of water. It slowly reacts to form hydrogen bromide (HBr) and hypobromous acid (HBrO):

Iodine is minimally soluble in water, with a solubility of 0.03 g per 100 g water. However, iodine will form an aqueous solution in the presence of iodide ion. This occurs with the addition of potassium iodide (KI), forming a triiodide ion.

Discuss halogen compounds and their properties.

The halogens all form binary compounds with hydrogen, and these compounds are known as the hydrogen halides: hydrogen fluoride (HF), hydrogen chloride (HCl), hydrogen bromide (HBr), hydrogen iodide (HI), and hydrogen astatide (HAt). All of these except HF are strong chemical acids when dissolved in water. However, hydrofluoric acid does have quite destructive properties towards animal tissue, including that of humans.

When in aqueous solution, the hydrogen halides are known as hydrohalic acids. The names of these acids are as follows:

All of these acids are dangerous and must be handled with great care. Some of these acids are also widely used in chemical manufacturing plants. Hydrogen astatide should also be a strong acid (hydroastatic acid), but it is seldom included in presentations about hydrohalic acids because of the extreme radioactivity of astatine (via alpha decay) and the fact that it readily decomposes into its constituent elements (hydrogen and astatine). 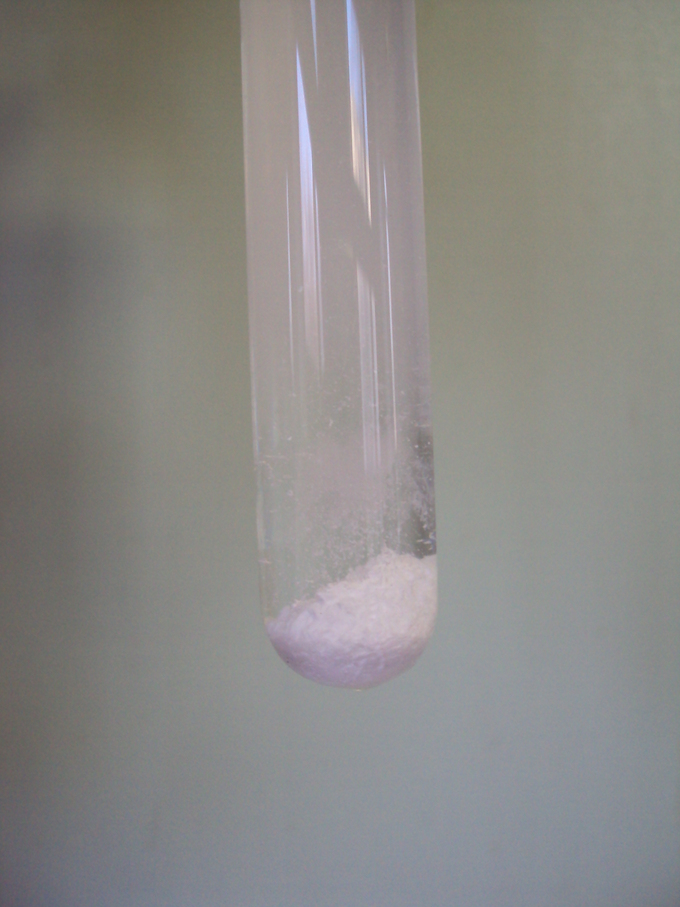 Many synthetic organic compounds, such as plastic polymers, as well as a few natural organic compounds, contain halogen atoms; these are known as halogenated compounds, or organic halides. Chlorine is by far the most abundant of the halogens and is the only one needed (as chloride ions ) in relatively large amounts by humans. For example, chloride ions play a key role in brain function by mediating the action of the inhibitory transmitter GABA. They are also used by the body to produce stomach acid. Iodine is needed in trace amounts for the production of thyroid hormones, such as thyroxine. On the other hand, neither fluorine nor bromine is believed to be essential for humans. Organohalogens are also synthesized through the nucleophilic abstraction reaction.

Although halogens and their compounds can be toxic, some are essential for the human body's functioning and are used in everyday products.

Discuss the uses of various halogens.

Despite its toxicity, fluoride can be found in many everyday products, including toothpaste, vitamin supplements, baby formulas, and even public water. Many dental products contain fluoride in order to prevent tooth decay, but overconsumption of fluoride can be fatal.

Chlorine accounts for about 0.15 percent of human body weight. Chlorine is primarily used in the production of hydrochloric acid, which is secreted from the parietal cells in the stomach and is used in maintaining the acidic environment for pepsin. It plays a vital role in maintaining the proper acid-base balance of body fluids. It is neutralized in the intestine by sodium bicarbonate.

Both chlorine and bromine are used as disinfectants for drinking water, swimming pools, fresh wounds, spas, dishes, and surfaces. They kill bacteria and other potentially harmful microorganisms through a process known as sterilization. Chlorine and bromine are also used in bleaching. Sodium hypochlorite, which is produced from chlorine, is the active ingredient of most fabric bleaches. Chlorine-derived bleaches are also used in the production of some paper products.

Iodine is an essential mineral for the body. It is used in the thyroid gland but can also be found in breast tissue, salivary glands, and adrenal glands. Without iodine, thyroid hormones cannot be produced, which leads to a condition called hypothyroidism. Without treatment, the thyroid gland will swell and produce a visible goiter. Children with hypothyroidism may develop mental retardation. In women, hypothyroidism can lead to infertility, miscarriages, and breast and ovarian cancer. Thyroid problems have been a common issue for many years, particularly in middle aged women; studies correlate this with the fact that iodine levels in the general population have significantly decreased in recent years. Because of certain health problems, many people have been consuming less salt, which usually contains iodine.

In drug discovery, the incorporation of halogen atoms into a lead drug candidate results in analogues that are usually more lipophilic and less water-soluble. Therefore, halogen atoms are used to improve penetration through lipid membranes and tissues. It follows that there is a tendency for some halogenated drugs to accumulate in adipose tissue.

DDT (dichlorodiphenyltrichloroethane) is a polyhalogenated pesticide that was banned in the United States in 1972 because of the potential harmful effects on human health. In the second half of World War II, it was used to control malaria and typhus among civilians and troops. The Swiss chemist Paul Hermann Müller was awarded the Nobel Prize in Physiology or Medicine in 1948 "for his discovery of the high efficiency of DDT as a contact poison against several arthropods. " After harmful environmental impacts of DDT were recognized, it was banned in agricultural use worldwide under the Stockholm Convention, but its limited use in disease vector control continues to this day, though it remains controversial. The US ban on DDT is cited by scientists as a major factor in the comeback of the bald eagle, the national bird of the United States, from near extinction. 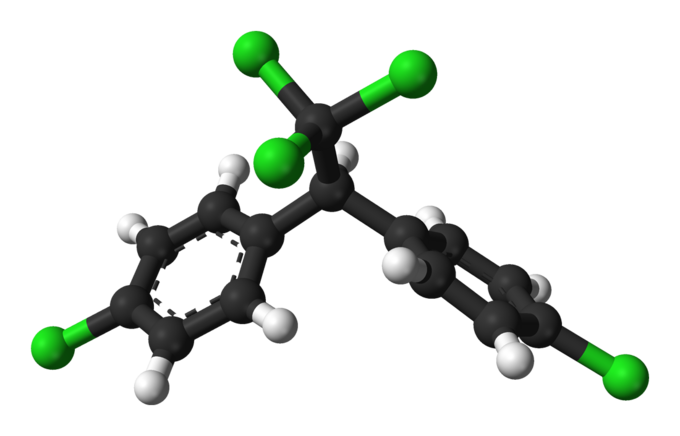 The Chemical Structure of DDT: DDT (dichlorodiphenyltrichloroethane) is an organochlorine used as an insecticide. It is now banned in the United States because of its potential harmful effects on human health. Key: chlorine atoms: green, carbon atoms: black, hydrogen atoms: white.

PHCs are generally immiscible in organic solvents or water but miscible in some hydrocarbons, from which they are often derived. PHCs are used in a vast array of products and industries, such as: