The Kinetic Molecular Theory of Matter

The kinetic molecular theory of matter explains how matter can change among the phases of solid, liquid, and gas.

The Kinetic Theory: A Microscopic Description of Matter

The kinetic molecular theory of matter offers a description of the microscopic properties of atoms (or molecules) and their interactions, leading to observable macroscopic properties (such as pressure, volume, temperature). An application of the theory is that it helps to explain why matter exists in different phases (solid, liquid, and gas) and how matter can change from one phase to the next.

The three phases of matter: Notice that the spacing between atoms or molecules increases as we move from a description of the solid phase to the gaseous one.

The kinetic molecular theory of matter states that:


Interactive: Intermolecular Attractions and States of Matter: Explore how states of matter are related to the strength of intermolecular attractions.

Let's take water as an example. We find that in its solid phase (ice), the water molecules have very little energy and cannot move away from each other. The molecules are held closely together in a regular pattern called a lattice. If the ice is heated, the energy of the molecules increases. This means that some of the water molecules are able to overcome the intermolecular forces that are holding them close together, and the molecules move further apart, forming liquid water. This is why liquid water is able to flow: the molecules have greater freedom to move than they had in the solid lattice. If the molecules are heated further, the liquid water will become water vapor, which is a gas. Gas particles have more energy and are on average at distances from each other which are much larger than the size of the atoms/molecules themselves. The attractive forces between the particles are very weak given the large distances between them. 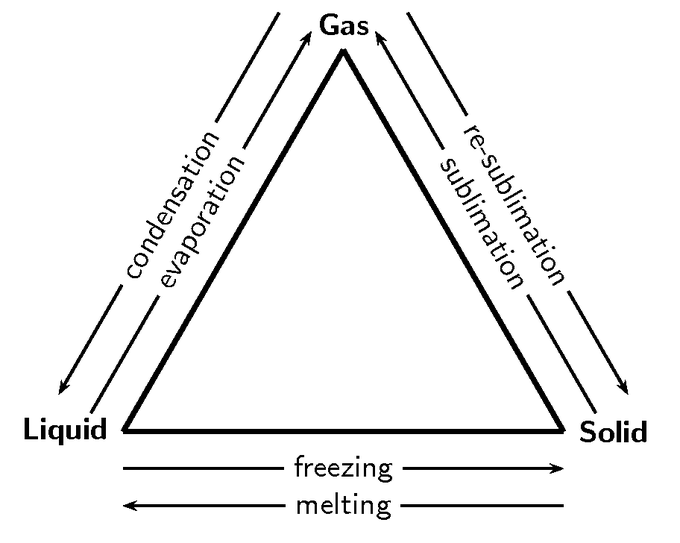 Changes in phase: A change in phase may occur when the energy of the particles is changed.

The kinetic theory of matter is also illustrated by the process of diffusion. Diffusion is the movement of particles from a high concentration to a low concentration. It can be seen as a spreading-out of particles resulting in their even distribution. Placing a drop of food coloring in water provides a visual representation of this process – the color slowly spreads out through the water. If matter were not made of particles, then we would simply see a clump of color, since there would be no smaller units that could move about and mix in with the water.


Interactive: Diffusion of a Drop: Click in the model to add a drop of dye. Watch how the molecules move through the water. Trace an individual molecule to see how it moves through the liquid.

The Kinetic Molecular Theory of Matter-1.pdf

Notes -Kinetic Molecular Theory and the States of Matter-1.docx

The Kinetic-Molecular theory is based on the idea that particles of matter always in motion.pdf