Substances that Exist as Gases

Gas as a State of Matter

Gas is one of the three classical states of matter (the others being liquid and solid). Near absolute zero, a substance exists as a solid. As heat is added to this substance it melts into a liquid at its melting point, boils into a gas at its boiling point, and if heated high enough would enter a plasma state in which the electrons are so energized that they leave their parent atoms from within the gas. 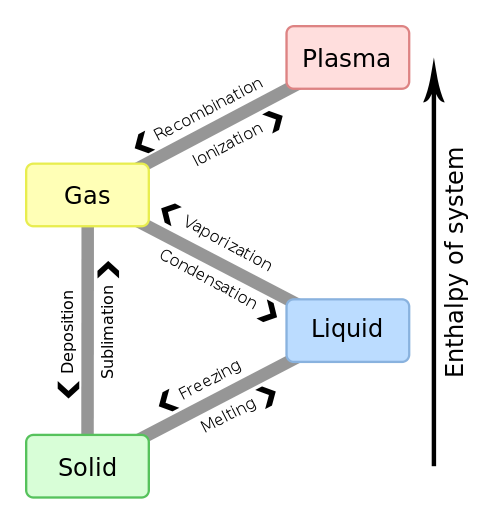 States of matter: Matter transitions between three classical states of matter (gas, solid, and liquid) and a fourth state of matter. Note that the enthalpy of a system is the heat content of a system at constant pressure. The process of a solid converting to a liquid is known as "melting"; liquid to a gas is "vaporization"; and gas back to a solid is "deposition." These same processes in the reverse direction are "freezing"; "condensation"; and "sublimation."

Why does matter exist in three different states? The Kinetic Theory of Matter provides a basic overview:


Interactive: Molecular View of a Gas: Explore the structure of a gas at the molecular level. Note that unlike solids, gases do not follow a rigidly patterned structure; at a microscopic level, gases are always moving and rearranging themselves.
We discussed the basic states of matter in which a substance can be interconverted depending on conditions. Under standard conditions (1 atm, 273 K), a substance which exists as a gas is called a pure gas and (disregarding any substance-specific intermolecular forces or particle volume that could alter this value) has a volume of 22.4 L per mole. A pure gas may be made up of individual atoms (e.g. a noble gas or atomic gas like neon), elemental molecules made from one type of atom (e.g. oxygen), or compound molecules made from a variety of atoms (e.g. carbon dioxide). At STP, if the boiling point of a given substance is below 273 K then you would expect that substance to be in gas form.


Interactive: What is Pressure?: Gases have no definite shape or volume. When they are constrained to a container, we can measure the pressure they exert on the container walls. The model shows the inside (yellow atoms) and outside (green atoms) of a balloon. The teal barrier represents the wall of the balloon. Add atoms to the balloon and watch what happens. Because of the increased pressure, the volume increases!

The group VIII elements (helium (He), neon (Ne), argon (Ar), krypton (Kr), xenon (Xe) and radon (Rn)) exist as monatomic gases at standard temperature and pressure (STP) and are called the noble gases. The only other elements which exist as gases at STP  are hydrogen (H2), nitrogen (N2) and oxygen (O2), plus the two halogens, fluorine (F2) and chlorine (Cl2). These gases, when grouped together with the monatomic noble gases are called "elemental gases. "

The SI unit of pressure is the pascal (Pa), which is equal to one Newton per meter squared (N/m2).

Recognize the relationship between derived and base SI units

The International System of Units (abbreviated SI from the French Système International d'Unités) is the basis of the metric system. The SI was established in 1960 and is based on the metre-kilogram-second system rather than the centimetre-gram-second system. The units are divided into two classes: base units and derived units. There are seven base units, each representing a different kind of physical quantity.

This follows the definition of electrical resistance.

Pressure, the effect of a force applied to a surface, is a derived unit. The unit of pressure in the SI system is the pascal (Pa), defined as the force of one newton per square meter:

In chemistry, it is more common to express pressures in units of atmospheres or torr:

Torr and millimeters of mercury (mm Hg, defined as a one millimeter difference in the height of a mercury barometer at 0°C) are nearly equivalent. Another unit of pressure used in meteorology is the bar:

Since the quantities measured can have such a wide range, a standardized prefix system has been set in place.

Standard prefixes for SI units: A prefix may be added to a unit's name to describe a multiple of the original unit.

Pressure can be represented by many different units and prefixes. When performing pressure calculations, it is important to ensure that all dimensions are in the same unit system.

On a given day, the atmospheric pressure is 770 mm Hg. What is the pressure in pascals?