Each successive level of protein folding ultimately contributes to its shape and therefore its function.


The shape of a protein is critical to its function because it determines whether the protein can interact with other molecules. Protein structures are very complex, and researchers have only very recently been able to easily and quickly determine the structure of complete proteins down to the atomic level. (The techniques used date back to the 1950s, but until recently they were very slow and laborious to use, so complete protein structures were very slow to be solved.) Early structural biochemists conceptually divided protein structures into four "levels" to make it easier to get a handle on the complexity of the overall structures. To determine how the protein gets its final shape or conformation, we need to understand these four levels of protein structure: primary, secondary, tertiary, and quaternary.

The gene, or sequence of DNA, ultimately determines the unique sequence of amino acids in each peptide chain. A change in nucleotide sequence of the gene's coding region may lead to a different amino acid being added to the growing polypeptide chain, causing a change in protein structure and therefore function.

The oxygen-transport protein hemoglobin consists of four polypeptide chains, two identical α chains and two identical β chains. In sickle cell anemia, a single amino substitution in the hemoglobin β chain causes a change the structure of the entire protein. When the amino acid glutamic acid is replaced by valine in the β chain, the polypeptide folds into an slightly-different shape that creates a dysfunctional hemoglobin protein. So, just one amino acid substitution can cause dramatic changes. These dysfunctional hemoglobin proteins, under low-oxygen conditions, start associating with one another, forming long fibers made from millions of aggregated hemoglobins that distort the red blood cells into crescent or "sickle" shapes, which clog arteries. People affected by the disease often experience breathlessness, dizziness, headaches, and abdominal pain. 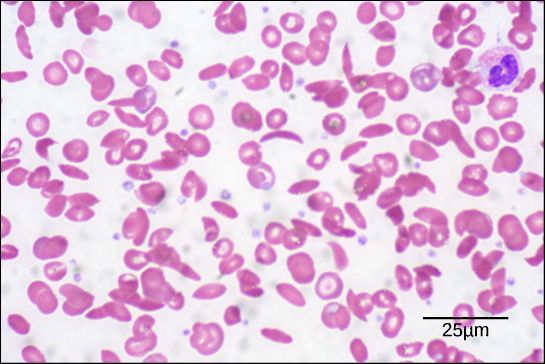 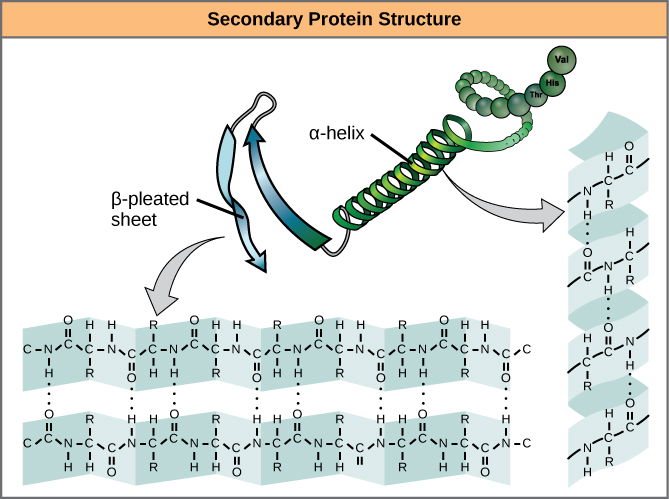 The tertiary structure of a polypeptide chain is its overall three-dimensional shape, once all the secondary structure elements have folded together among each other. Interactions between polar, nonpolar, acidic, and basic R group within the polypeptide chain create the complex three-dimensional tertiary structure of a protein. When protein folding takes place in the aqueous environment of the body, the hydrophobic R groups of nonpolar amino acids mostly lie in the interior of the protein, while the hydrophilic R groups lie mostly on the outside. Cysteine side chains form disulfide linkages in the presence of oxygen, the only covalent bond forming during protein folding. All of these interactions, weak and strong, determine the final three-dimensional shape of the protein. When a protein loses its three-dimensional shape, it will no longer be functional. 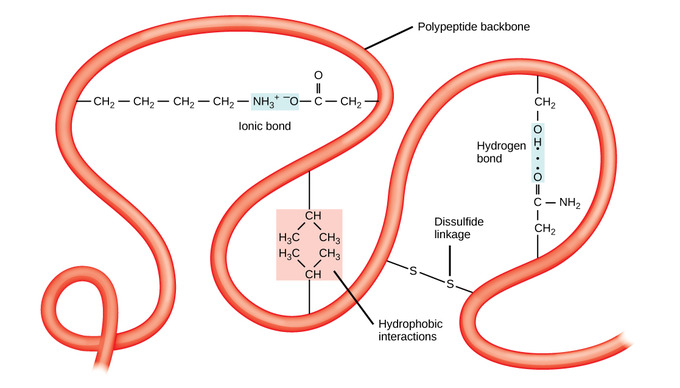 In proteins with more than one subunit, weak interactions between the subunits help to stabilize the overall structure. Enzymes often play key roles in bonding subunits to form the final, functioning protein.

For example, insulin is a ball-shaped, globular protein that contains both hydrogen bonds and disulfide bonds that hold its two polypeptide chains together. Silk is a fibrous protein that results from hydrogen bonding between different β-pleated chains. 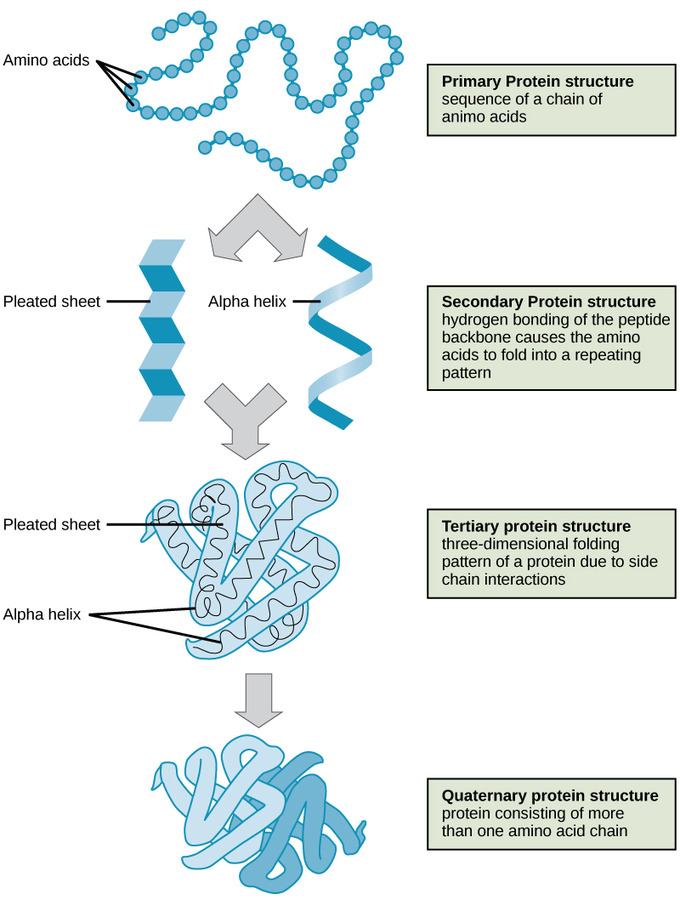 Denaturation is a process in which proteins lose their shape and, therefore, their function because of changes in pH or temperature.

Discuss the process of protein denaturation


Each protein has its own unique sequence of amino acids and the interactions between these amino acids create a specify shape. This shape determines the protein's function, from digesting protein in the stomach to carrying oxygen in the blood.

Changing the Shape of a Protein

If the protein is subject to changes in temperature, pH, or exposure to chemicals, the internal interactions between the protein's amino acids can be altered, which in turn may alter the shape of the protein. Although the amino acid sequence (also known as the protein's primary structure) does not change, the protein's shape may change so much that it becomes dysfunctional, in which case the protein is considered denatured. Pepsin, the enzyme that breaks down protein in the stomach, only operates at a very low pH. At higher pHs pepsin's conformation, the way its polypeptide chain is folded up in three dimensions, begins to change. The stomach maintains a very low pH to ensure that pepsin continues to digest protein and does not denature.

Because almost all biochemical reactions require enzymes, and because almost all enzymes only work optimally within relatively narrow temperature and pH ranges, many homeostatic mechanisms regulate appropriate temperatures and pH so that the enzymes can maintain the shape of their active site.

It is often possible to reverse denaturation because the primary structure of the polypeptide, the covalent bonds holding the amino acids in their correct sequence, is intact. Once the denaturing agent is removed, the original interactions between amino acids return the protein to its original conformation and it can resume its function.

However, denaturation can be irreversible in extreme situations, like frying an egg. The heat from a pan denatures the albumin protein in the liquid egg white and it becomes insoluble. The protein in meat also denatures and becomes firm when cooked. 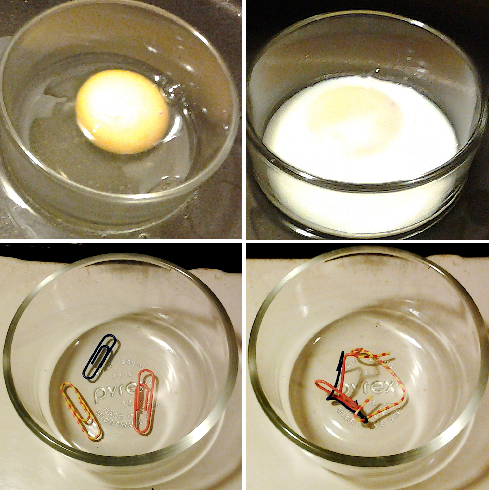 Denaturing a protein is occasionally irreversible: (Top) The protein albumin in raw and cooked egg white. (Bottom) A paperclip analogy visualizes the process: when cross-linked, paperclips ('amino acids') no longer move freely; their structure is rearranged and 'denatured'.

Chaperone proteins (or chaperonins ) are helper proteins that provide favorable conditions for protein folding to take place. The chaperonins clump around the forming protein and prevent other polypeptide chains from aggregating. Once the target protein folds, the chaperonins disassociate.

CHE 402 •  Technological Institute of the Philippines