In the periodic table, the elements are placed from left to right in each period in the sequence of their atomic numbers.

Identify the general trends in chemical properties of elements based on their position in the periodic table.

Structure of the Periodic Table

The periodic table displays all the chemical elements organized by atomic number and electron configuration. Specifically, elements are presented by increasing atomic number. The main body of the table is an 18 by 7 grid, and elements with the same number of valence electrons are kept together in groups (columns), such as the halogens and the noble gases. The table has four distinct rectangular areas, or blocks. The f block is usually included below the main table rather than within it to minimize the table's width. The trends in the periodic table can help predict the properties of various elements and the relations between properties. As a result, the periodic table is a useful framework for analyzing chemical behavior and as such is widely used in chemistry and other sciences.

A group, or family, is a vertical column in the periodic table. Elements in the same group show patterns in atomic radius, ionization energy, and electronegativity. From top to bottom in a group, the atomic radii of the elements increase: since there are more filled energy levels, valence electrons are found farther from the nucleus. From top to bottom, each successive element has a lower ionization energy because it is easier to remove an electron since the atoms are less tightly bound. Similarly, from top to bottom, elements decrease in electronegativity due to an increasing distance between valence electrons and the nucleus. There are exceptions to these trends however – in Group 11, for example, the electronegativity increases down the group.

Elements in the same period show trends in atomic radius, ionization energy, electron affinity, and electronegativity. Moving left to right across a period, from the alkali metals to the noble gases, atomic radius usually decreases. This is because each successive element has an additional proton and electron, which causes the electrons to be drawn closer to the nucleus. The additional proton increases the effective nuclear charge to a greater extent than the addition of an extra electron to an already partially-filled shell. The decrease in atomic radius also causes ionization energy to increase from left to right across a period: the more tightly bound an element is, the more energy is required to remove an electron. Electronegativity increases in the same manner as ionization energy because of the pull exerted on the electrons by the nucleus. Electron affinity also shows a slight trend across a period: metals (the left side of a period) generally have a lower electron affinity than nonmetals (the right side of a period), with the exception of the noble gases which have an electron affinity of zero.

Because of the importance of the outermost electron shell, the different regions of the periodic table are sometimes referred to as blocks, named according to the subshell in which the "last" electron resides. The s block includes the first two groups (alkali metals and alkaline earth metals) as well as hydrogen and helium. The p block includes the last six groups, which are Groups 13 to 18 in IUPAC (3A to 8A in American), and contains, among others, all of the metalloids. The d block includes Groups 3 to 12 in IUPAC (or 3B to 2B in American group numbering) and contains all of the transition metals. The f block, usually offset below the rest of the periodic table, includes the lanthanides and actinides. 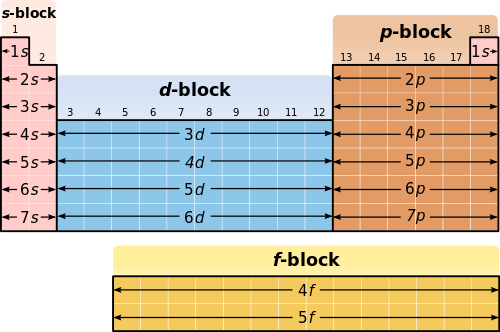 The primary determinant of an element's chemical properties is its electron configuration, particularly that of the valence shell electrons. For instance, all atoms with four valence electrons occupying p orbitals will share some similar characteristics. The type of orbital in which the atom's outermost electrons reside determines the "block" to which that element belongs. The number of valence shell electrons determines the family, or group, to which the element belongs. The total number of electron shells an atom has determines the period to which it belongs. Each shell is divided into different subshells. Since the outermost electrons determine chemical properties, those with the same number of valence electrons are generally grouped together.

The halogens are a series of highly reactive, nonmetal elements from Group 17 of the periodic table.

Describe the general properties of the halogen elements.

The halogens are nonmetallic elements in Group 17 of the periodic table. They include fluorine, chlorine, bromine, iodine, and astatine. Ununseptium, which is not a naturally occurring element, is also often considered a halogen. As typical nonmetals, they have low melting and boiling points. A unique characteristic of halogens is that they are the only element group that includes elements that belong to all three classical states of matter: solid, liquid, and gas at room temperature .

Safety and Storage for Elemental Halogens

Halogens are generally toxic, or even lethal, to biological organisms in their elemental forms. They tend to combine readily, and explosively, with metals, particularly with alkali metals. Fluorine is one of the most reactive elements in existence, attacking otherwise inert materials, such as glass, and forming compounds with the heavier noble gases. It is a corrosive and highly toxic gas. The reactivity of fluorine is such that if it is used or stored in laboratory glassware, it can react with glass in the presence of small amounts of water to form silicon tetrafluoride (SiF4). Therefore, fluorine must be handled with substances such as Teflon (which is itself an organofluorine compound), extremely dry glass, or metals such as copper or steel that form a protective layer of fluoride on their surface. The high reactivity of fluorine also means that once it does react with something, it bonds with it so strongly that the resulting molecule is very inert and non-reactive to anything else. For example, Teflon is a polymer of fluorine bonded with carbon. 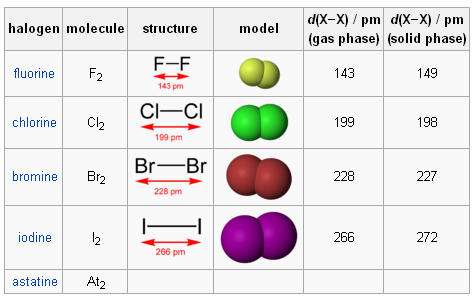 The halogens all form binary compounds with hydrogen, known as the hydrogen halides: hydrogen fluoride (HF), hydrogen chloride (HCl), hydrogen bromide (HBr), hydrogen iodide (HI), and hydrogen astatide (HAt). All of these are strong acids when dissolved in water, with the exception of HF. However, hydrofluoric acid is quite destructive to animal tissue. When in aqueous solution, the hydrogen halides are known as hydrohalic acids. The names of these acids are as follows: hydrofluoric acid, hydrochloric acid, hydrobromic acid, and hydroiodic acid. All of these acids must be handled with great care because they are extremely dangerous. Some of these acids are also widely used in industry. The halogens can also react with each other to form interhalogen compounds.

Reactivity of Halogens and Water

Chlorine has a maximum solubility of about 7.1 g Cl2/kg H2O at ambient temperature (21 °C). Dissolved chlorine reacts to form hydrochloric acid (HCl) and hypochlorous acid (HClO), a solution that can be used as a disinfectant or bleach:

Bromine has a solubility of 3.41 g/100 g H2O, but it slowly reacts to form hydrogen bromide (HBr) and hypobromous acid (HBrO):

Iodine, however, is minimally soluble in water (0.03 g/100 g H2O at 20 °C) and does not react with it. However, iodine will form an aqueous solution in the presence of iodide ions, such as with the addition of potassium iodide (KI), because the triiodide ion (I3-) is formed.

Noble gases are the six chemical elements of Group 18 of the periodic table, being monatomic and (with very limited exceptions) inert.

Identify the properties of the noble gases. 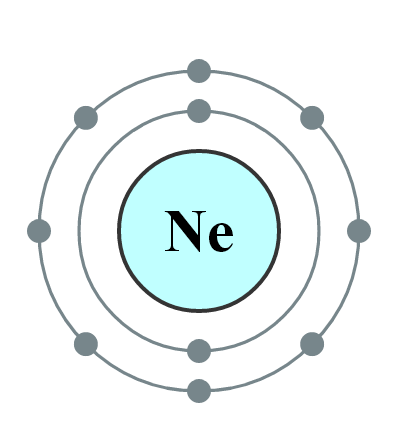 The noble gases are a group of chemical elements that make up Group 18 on the periodic table. These gases all have similar properties under standard conditions: they are all odorless, colorless, monatomic gases with very low chemical reactivity. The six noble gases that occur naturally are helium (He), Neon (Ne), Argon (Ar), Krypton (Kr), Xenon (Xe), and Radon (Rn).

Properties of the Noble Gases

The properties of the noble gases can be well explained by modern theories of atomic structure. The outer shell of valence electrons is considered to be "full" in noble gases, giving them little tendency to participate in chemical reactions. It has been possible to prepare only a few hundred noble gas compounds. In the case of Neon (Ne), for example, both the n = 1 and n = 2 shells are complete and therefore it is a stable monatomic gas under ambient conditions.

The melting and boiling points (physical properties) of a noble gas are close together, differing by less than 10 °C (18 °F) – that is to say, they are liquids over only a small temperature range.

Electron Configurations in the Noble Gases

The noble gas atoms, as do the atoms in most other groups on the periodic table, increase steadily in atomic radius from one period to the next due to an increasing number of electrons. The size of the atom is related to several properties. For example, the ionization potential decreases with an increasing radius because the valence electrons in the larger noble gases are farther away from the nucleus and so are not held as tightly together by the atom. Noble gases have the largest ionization potential among the elements of each period. This reflects the stability of their electron configuration and points again to their relative lack of chemical reactivity. 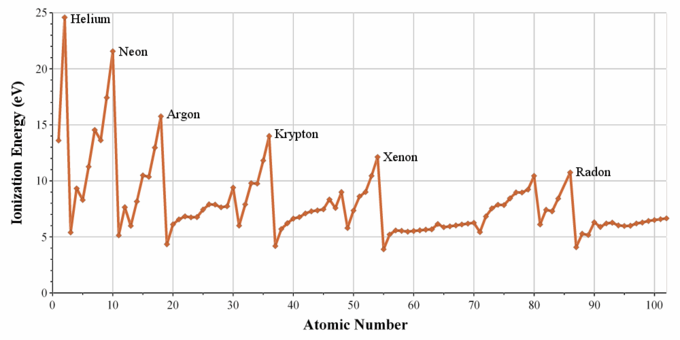 The noble gases were originally also referred to as "inert gases," since it was believed that they did not react with other elements to form compounds. In recent years, however, this term has fallen out of favor, although you will occasionally see it in older literature. Scientists have discovered that, since the heavier noble gas atoms are held together less strongly by electromagnetic forces than are the lighter noble gases, such as helium, the outer electrons of these heavier atoms can be removed more easily. Because of this, many compounds of the gases xenon, krypton, and radon can, in fact, be formed. Of the six noble gases, only krypton, xenon, and radon have the ability to form stable compounds. These are used as oxidizing agents.

Applications for the Noble Gases

The noble gases glow in distinctive colors when used inside gas-discharge lamps, such as neon lights. Xenon is commonly used in xenon arc lamps, which are present in film projectors and automobile headlights due to their nearly continuous spectrum that resembles daylight. 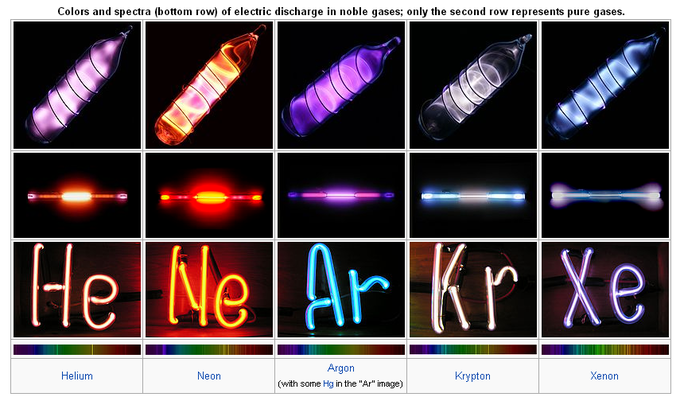 The noble gases are also used in excimer lasers, which are based on short-lived electronically excited molecules known as excimers. The excimers used for lasers may be noble gas dimers such as Ar2, Kr2, or Xe2, or, more commonly, the noble gas is combined with a halogen in excimers such as ArF, KrF, XeF, or XeCl. These lasers produce ultraviolet light, which, due to its short wavelength (193 nm for ArF and 248 nm for KrF), allows for high-precision imaging. Excimer lasers have many industrial, medical, and scientific applications. They are used for microlithography and microfabrication, which are essential for integrated circuit manufacturing; and for laser surgery, including laser angioplasty and eye surgery.