Our current knowledge and practice of public speaking draws upon the Western thought from Greece and Rome.

Identify key figures of public speaking through the ages

Our current knowledge and practice of public speaking draws upon ancient Greek, Roman, and Western thought.

The ancient Greeks highly valued public political participation, where public speaking was a crucial tool. We will begin an overview of four Ancient Greek philosophers, also known as the "fantastic four"Aspasia of Miletus, Socrates, Plato, and Aristotle.

Aspasia of Miletus (469 BCE), the "mother of rhetoric," is believed to have taught rhetoric to Socrates. During this period Pericles, the Athenian ruler and Aspasia's partner, treated Aspasia as an equal and allowed her the opportunity to engage in dialogue with the important and educated men of society.

Socrates (469-399 BCE) greatly influenced the direction of the Classical Period. Most of what we know about Socrates comes from the writings of his student Plato.

Plato (429-347 BCE) wrote about rhetoric in the form of dialogues with Socrates as the main character. Plato defined the scope of rhetoric according to his negative opinions of the art. He criticized the Sophists for using rhetoric as a means of deceit instead of discovering truth.

Aristotle (384-322 BCE) is the most famous Greek Scholar. Aristotle studied in Plato's Academy where he later taught public speaking until Plato's death in 347 BCE. During this time, he opened his own school of politics, science, philosophy, and rhetoric. 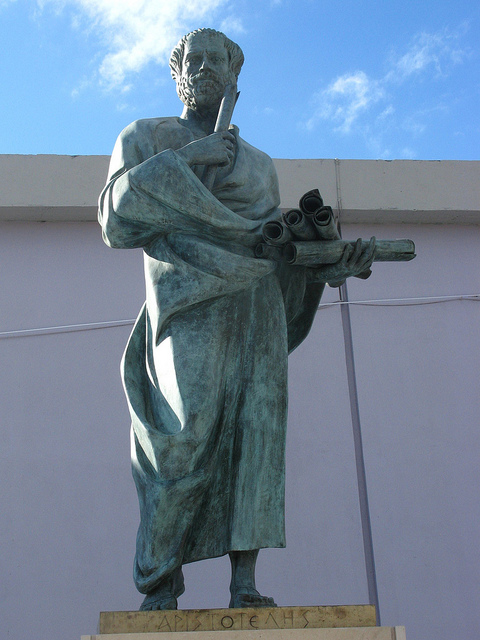 Aristotle: This statue resides at Aristotle University of Thessaloniki, Greece.

Aristotle defined rhetoric as the "faculty of discovering the possible means of persuasion in reference to any subject whatever." Aristotle divided the "means of persuasion" into three parts, or three artistic proofs, necessary to persuade others: logical reason (logos), human character (ethos), and emotional appeal (pathos).

Sophist (400s BCE): The Classical Period flourished for nearly a millennium in and around Greece as democracy gained prominence. Citizens learned public speaking from early teachers known as Sophists. Sophists were self-appointed professors of how to succeed in the civic life of the Greek states.

The Romans: Cicero and Quintilian

Cicero (106-43 BCE) is considered one of the most significant rhetoricians of all time. His works include the early and very influential De Inventione (On Invention ), often read alongside the Ad Herennium as the two basic texts of rhetorical theory (throughout the Middle Ages and into the Renaissance); De Oratore (a fuller statement of rhetorical principles in dialogue form); and Topics (a rhetorical treatment of common topics, highly influential through the Renaissance). Cicero is most famous in the field of public speaking for creating the five canons of rhetoric, a five-step process for developing a persuasive speech that we still use to teach public speaking today.

Quintilian (c. 35-95 CE) extended this line of thinking and argued that public speaking was inherently moral. He stated that the ideal orator is "a good man speaking well. "

In contrast to the Classical Period, which saw tremendous growth and innovation in the study of communication, the Medieval Period might be considered the dark ages of academic study in public speaking. The church felt threatened by secular rhetorical works they considered full of pagan thought. The Church did, however, focus on persuasion and developing public presentation to improve preaching.

St. Augustine (354 CE-430 CE), a Christian clergyman and renowned rhetorician, argued for the continued development of ideas that had originated during the Classical Period. He thought that the study of persuasion, in particular, was a worthwhile pursuit for the church.

Powered by a new intellectual movement during this period, secular institutions and governments started to compete with the church for personal allegiances. Ideas surrounding issues of style in speaking situations received significant attention during the Renaissance period.

Petrus Ramus (1515-1572) paid great attention to the idea of style by actually grouping style and delivery of the five canons together. Ramus also argued that invention and arrangement did not fit the canon and should be the focus of logic, not rhetoric. Ramus challenged much of what early scholars thought of truth, ethics, and morals as they applied to communication.

Francis Bacon (1561-1626), a contemporary of Shakespeare, believed that the journey to truth was paramount to the study and performance of communication. According to Bacon, reason and morality required speakers to have a high degree of accountability, making it an essential element in oration.

Neoclassicism revived the classical approach to rhetoric by adapting and applying it to contemporary situations.

George Campbell (1719-1796), a Scottish minister and educator, tried to create convincing arguments using scientific and moral reasoning by seeking to understand how people used speech to persuade others.

Finally, the elocutionary approach (mid 1700's to mid-1800's) concentrated on delivery and style by providing strict rules for a speaker's bodily actions such as gestures, facial expressions, tone, and pronunciation.

Overall, the Enlightenment Period served as a bridge between the past and the present. Political rhetoric also underwent renewal in the wake of the U.S. and French revolutions. The rhetorical studies of ancient Greece and Rome were resurrected in the studies of the era as speakers and teachers looked to Cicero and others to inspire defense of the new republic. Leading rhetorical theorists included John Quincy Adams, who advocated for the democratic advancement of the art of rhetoric.

Throughout the 20th century, rhetoric developed as a concentrated field of study with the establishment of rhetorical courses in high schools and universities. Courses such as public speaking and speech analysis apply fundamental Greek theories, as well as trace rhetorical development throughout the course of history.

The 1960's and 70's saw renewed emphasis and focus on the works of those from the Classical Period. Thus, the 60's and 70's worked to bridge together the old and new school of communication study for the first time. Communication departments had professors who studied and taught classical rhetoric, contemporary rhetoric, along with empirical and qualitative social science.