Difference Between Economic and Accounting Profit

Explicit costs are costs that involve direct monetary payment. Wages paid to workers, rent paid to a landowner, and material costs paid to a supplier are all examples of explicit costs.

Accounting profit is the difference between total monetary revenue and total monetary costs, and is computed by using generally accepted accounting principles (GAAP). Put another way, accounting profit is the same as bookkeeping costs and consists of credits and debits on a firm's balance sheet. These consist of the explicit costs a firm has to maintain production (for example, wages, rent, and material costs). The monetary revenue is what a firm receives after selling its product in the market.

Accounting profit is also limited in its time scope; generally, accounting profit only considers the costs and revenue of a single period of time, such as a fiscal quarter or year. 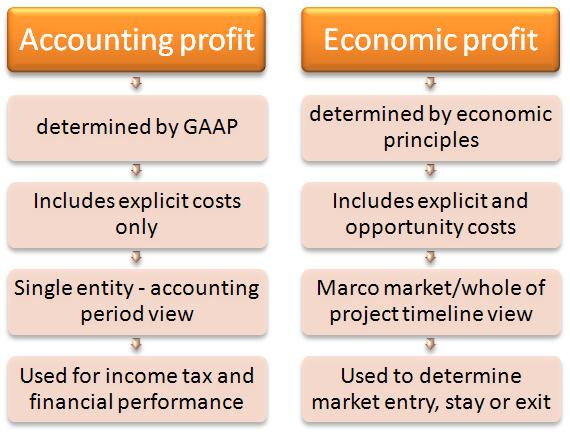 Economic vs. Accounting Profit: The biggest difference between economic and accounting profit is that economic profit takes implicit, or opportunity, costs into consideration.

Sources and Determinants of Profit

Whether economic profit exists or not depends how competitive the market is, and the time horizon that is being considered.

In competitive markets, where there are many firms and no single firm can affect the price of a good or service, economic profit can differ in the short-run and in the long-run.

MICRO ECONO •  Univ of the West Indies at Mona

Why some firms might be able to continue to make <b>economic</b> <b>profit</b> in the long.docx