The United States in the Global Economy

The Importance of Trade

International trade is an integral part of the modern world economy.

Discuss the reasons of the U.S. increase in international trade participation after World War II


Economists generally support trade because it allows for increased overall utility for both countries. Gains from trade are commonly described as resulting from: 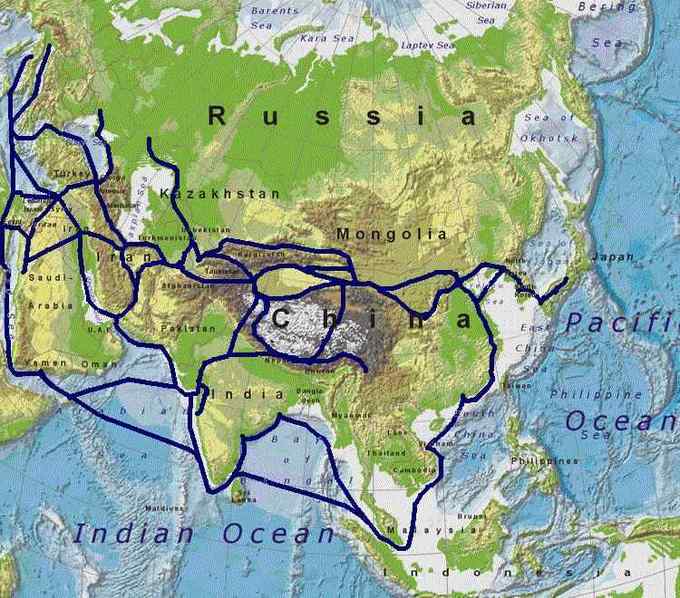 The Rise of International Trade

International trade is important, and, over time, has become more important. There have been three primary reasons for this increase in importance.

First, there have been large reductions in the cost of transportation and communication. It is now much cheaper to not only operate internationally and trade with foreign partners, but also to exchange information between potential buys and sellers.

Second, technological advances have made international production and trade easier to coordinate. More efficient telecommunications, from the first transatlantic telephone cable in 1956 to the popularization of the internet in the 1980s and 1990s, have allowed companies to exchange goods more efficiently and lowered the costs of international integration. Technological advances, from the invention of the jet engine to the development of just-in-time manufacturing, have also contributed to the rise in international trade.

Third, trade barriers between countries have fallen and are likely to continue to fall. In particular, the Bretton Woods system of international monetary management has shaped the relationship between the world's major industrial states and has resulted in a much more integrated system of international exchange. Established in 1946 to rebuild the international economic system after World War II, the Bretton Woods Conference set up regulations for production of their individual currencies to maintain fixed exchange rates between countries with the aim of more easily facilitating international trade.This was the foundation of the U.S. vision of postwar world free trade, which also involved lowering tariffs and, among other things, maintaining a balance of trade via fixed exchange rates that would be favorable to the capitalist system. Although the world eventually abolished the system of fixed exchange rates, the goal of more open economies and free international trade remained.

The Balance of Trade

The balance of trade is the difference between the monetary value of exports and imports of output in an economy over a certain period.


The balance of trade is the difference between the monetary value of exports and imports of output in an economy over a certain period, measured in the currency of that economy. It is the relationship between a nation's imports and exports. It is measured by finding the country's net exports. A positive balance is known as a trade surplus if it consists of exporting more than is imported; a negative balance is referred to as a trade deficit or, informally, a trade gap.

Factors that can affect the balance of trade include:

The twin deficits hypothesis is a concept from macroeconomics that contends that there is a strong link between a national economy's current account balance and its government budget balance. This link can be seen from considering the national accounting model of the economy:

Y
represents national income or GDP,
C
is consumption,
I
is investment,
G
is government spending, and
NX
stands for net exports (exports minus imports). This represents GDP because all the production in an economy (the left hand side of the equation) is used as consumption (
C
), investment (
I
), or government spending (
G
), and the leftover production is exported (
NX
).

Another equation defining GDP using alternative terms (which in theory results in the same value) is:

Y
is again GDP,
C
is consumption,
S
is savings, and
T
is taxes. This is because national income is also equal to output, and all individual income either goes to pay for consumption (
C
), to pay taxes (
T
), or becomes savings (
S
). 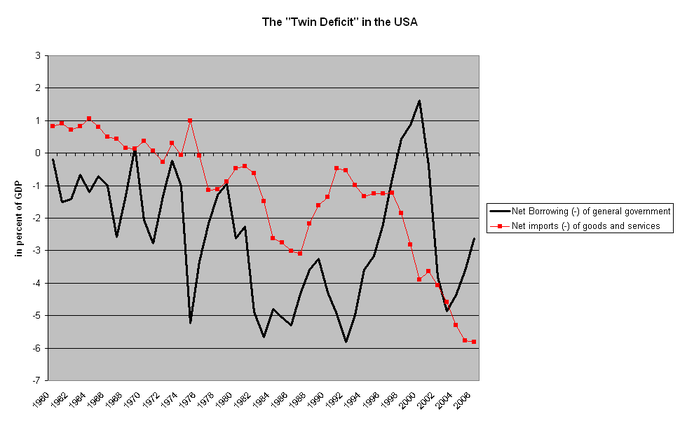 Twin Deficits in the US: In the U.S., net borrowing has tended to have a direct relationship with net imports. The red line represents net imports, which is equivalent to the negative balance of trade, and the black line represents net borrowing, which is equivalent to the government budget deficit. Although the two are not identical, a rise in one tends to accompany a rise in the other, and vice versa.

The twin deficits hypothesis implies that as the budget deficit grows, net capital outflow from a country falls. This is because the nation is financing its spending by selling assets to foreigners. The total rate of national savings falls, which may lead to an increase in the interest rate as lending to the country (i.e. buying bonds and other financial assets) becomes more risky.