These five factors are assumed to represent the basic structure behind all personality traits. These five factors were defined and described by several different researchers during multiple periods of research. However, as a result of their broad definitions, the Big Five personality traits are not nearly as powerful in predicting and explaining actual behavior as are the more numerous lower-level, specific traits.

Understanding its people is as important to a company as understanding its operations and processes. Understanding what personality components drive the behavior of subordinates is a highly useful informational data point for management that can be used to determine what type of assignments should be set, how motivation should be pursued, what team dynamics may arise, and how to best approach conflict and/or praise when applicable.


The Myers-Briggs Type Indicator (MBTI) assessment is a questionnaire designed to measure the psychological preferences that shape how people perceive the world and make decisions. The original developers of the personality inventory were Katharine Cook Briggs and her daughter, Isabel Briggs Myers. They began work on a questionnaire during World War II to help women who were entering the industrial workforce as part of the war effort to understand their own personality preferences and use that knowledge to identify the jobs that would be best for them. That initial questionnaire grew into the Myers-Briggs Type Indicator, which was first published in 1962. The MBTI focuses on normal populations and emphasizes the value of naturally occurring differences between people. 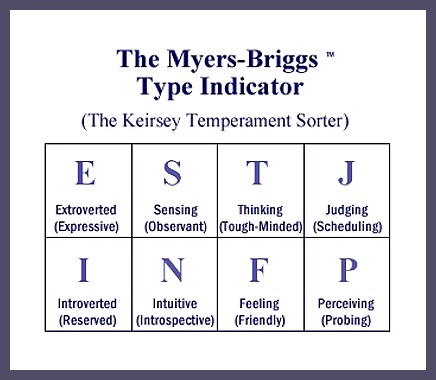 MBTI personality types: The dimensions of the MBTI are seen here, along with temperament descriptions associated with each personality trait.

The MBTI sorts psychological differences into four opposite pairs, or dichotomies, resulting in 16 possible psychological personality types. None of these types are good or bad; however, Briggs and Myers theorized that societies as a whole naturally prefer one overall type. In the same way that writing with the left hand is hard work for a right-handed person, people find that using their opposite psychological preferences is difficult, even if they can become proficient by practicing and developing those different ways of thinking and behaving.

The 16 personality types are typically referred to by an abbreviation of four letters—the initial letters of each of their four type preferences. The four type preferences are: Extraversion vs. Introversion, Sensing vs. Intuition, Thinking vs. Feeling, and Judgment vs. Perception.

One possible classification of a personality type is ESTJ: extraversion (E), sensing (S), thinking (T), judgment (J). Another example is INFP: introversion (I), intuition (N), feeling (F), perception (P); and so on for all 16 possible type combinations. In this situation, extroversion means "outward turning" and introversion means "inward turning." People who prefer judgment over perception are not necessarily more judgmental or less perceptive; they simply prefer one over the other. The most common combination from the Myers-Briggs test is ISFJ or Introvert, Sensing, Feeling, and Judgment.

One of the most common contexts for using the MBTI is team-building and employee personality identification. Managers are tasked with creating work groups and teams with a variety of human resources, which is a complicated social process of intuitively estimating who would complement who in group dynamics. The MBTI test is an excellent tool to measure and more accurately predict how individuals will interact in a group and what types of skills they may bring to the table.

One particularly good example is in the IE relationship. Understanding which employees in a team are naturally introverted is a useful way to ensure that a manager doesn't miss out on these employees' opinions just because they are naturally quiet. The manager could meet with them privately and informally—over coffee, for instance—and get their opinions. Similarly, knowing which members tend to be intuitive thinkers (NT) and which tend to understand emotions and be observant (SF) can lead the manager to give them very different tasks, though the two might work well together in a group setting since they balance each other. Management can use this tool to minimize conflict and optimize performance.

The disposition theory, three fundamental traits, and HEXACO model of personality structure are applicable to the work place.

Hans Eysenck rejected the idea that there are "tiers" of personality traits, theorizing instead that there are just three traits that describe human personality. These traits are extroversion, neuroticism, and psychoticism. Extroversion and neuroticism provide a two-dimensional space to describe individual differences in behavior. Eysenck described these as analogous to latitude and longitude describing a point on the Earth. An individual could rate high on both neuroticism and extroversion, low on both traits, or somewhere in between. Where an individual falls on the spectrum determines her/his overall personality traits.

The third dimension, psychoticism, was added to the model in the late 1970s as a result of collaborations between Eysenck and his wife, Sybil B. G. Eysenck.

Aston and Lee's six-dimensional HEXACO model of personality structure is based on a lexical hypothesis that analyzes the adjectives used in different to describe personality, beginning with English. Subsequent research was conducted in other languages, including Croatian, Dutch, Filipino, French, German, Greek, Hungarian, Italian, Korean, Polish, and Turkish. Comparisons of the results revealed six emergent factors. The six factors are generally named Honesty-Humility (H), Emotionality (E), Extroversion (X), Agreeableness (A), Conscientiousness (C), and Openness to Experience (O). After the adjectives that describe each of these six factors were collected using self-reports, they were distilled to four traits that describe each factor.

These three personality trait theories, among others, are used to describe and define personalities today in psychology and in organizational behavior.

Running Head: THE TRAIT MODEL OF PERSONALITY 1 The Trait Model of Pers

Diversity and Personality at Work

MGT 104 •  University of the Philippines Diliman